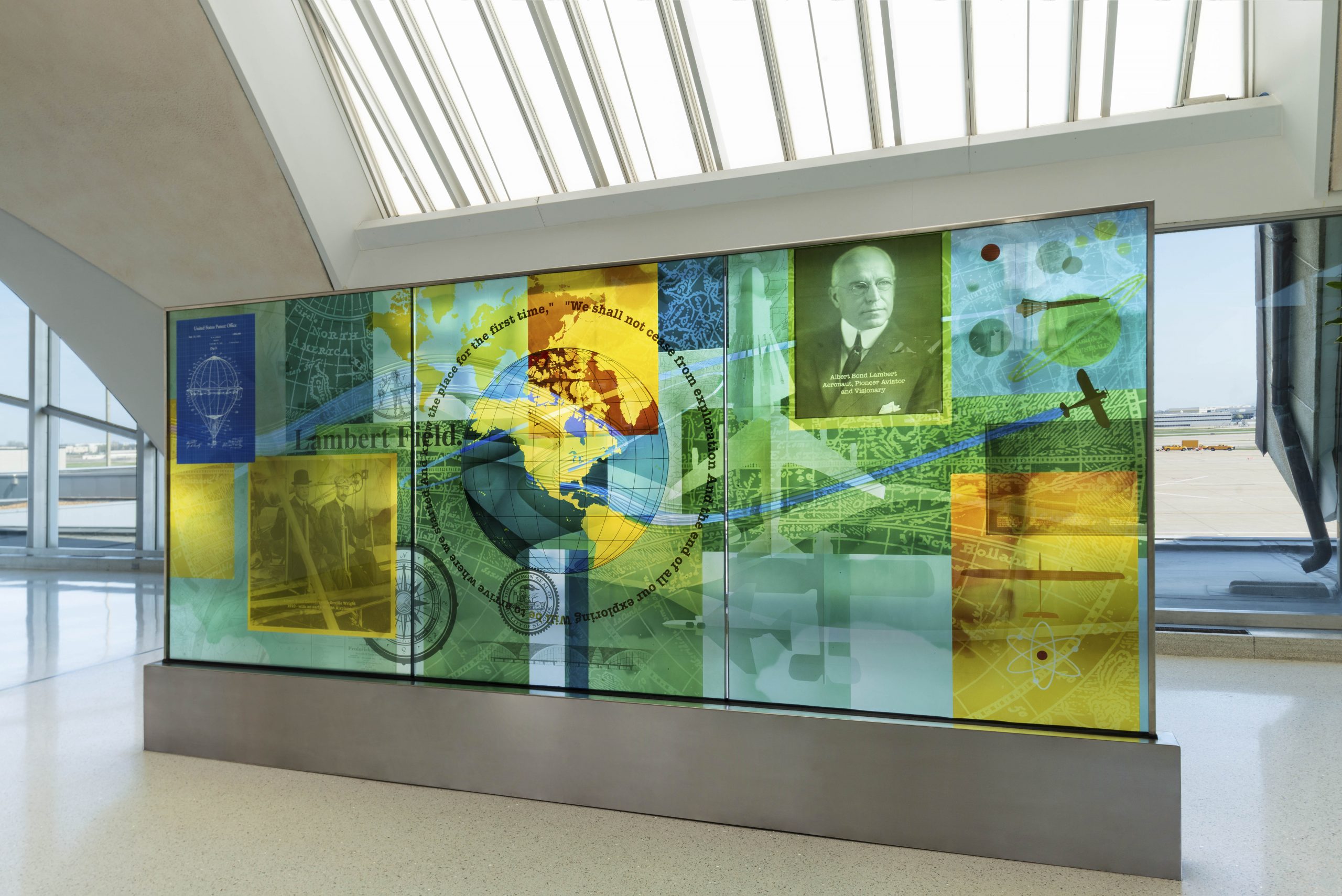 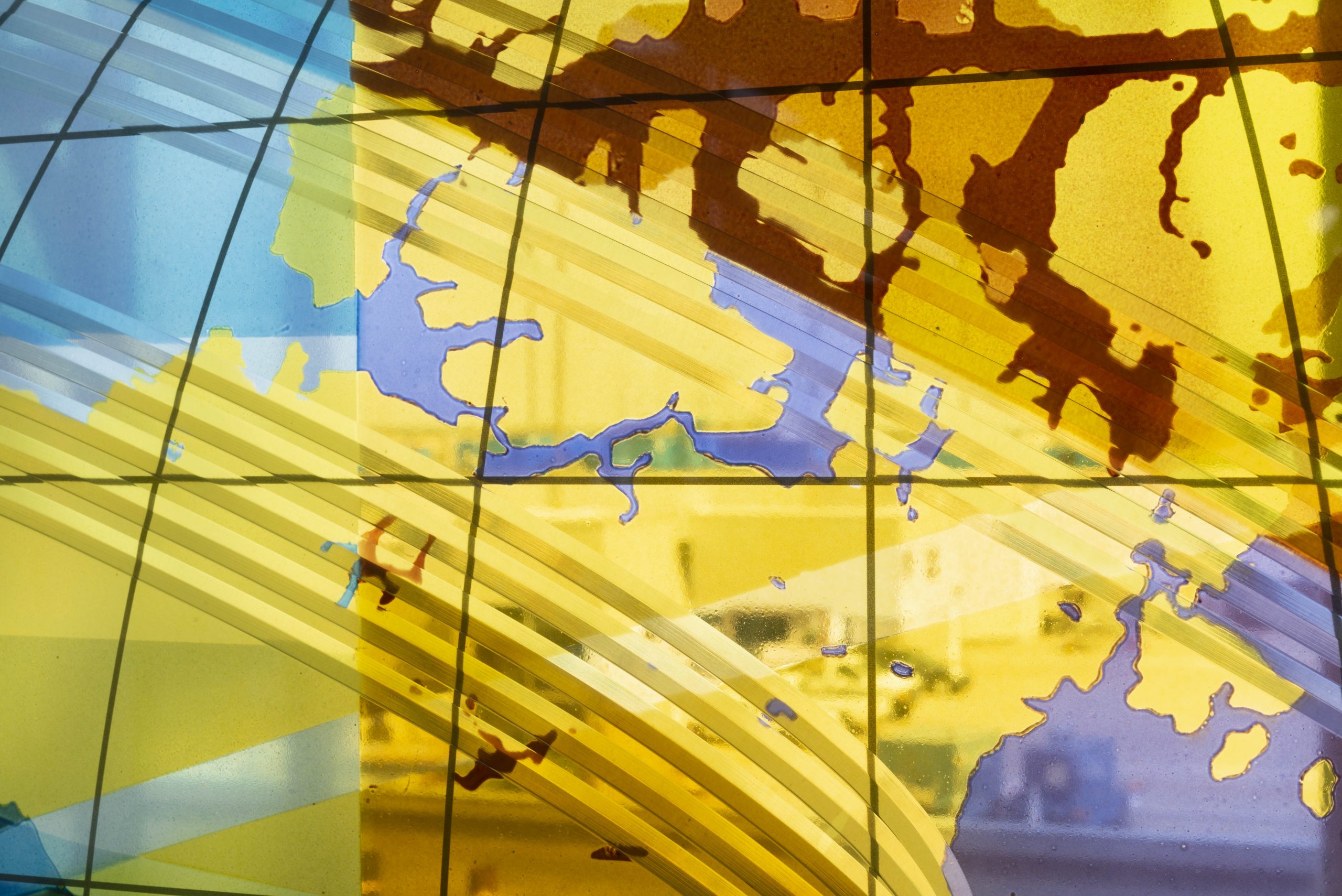 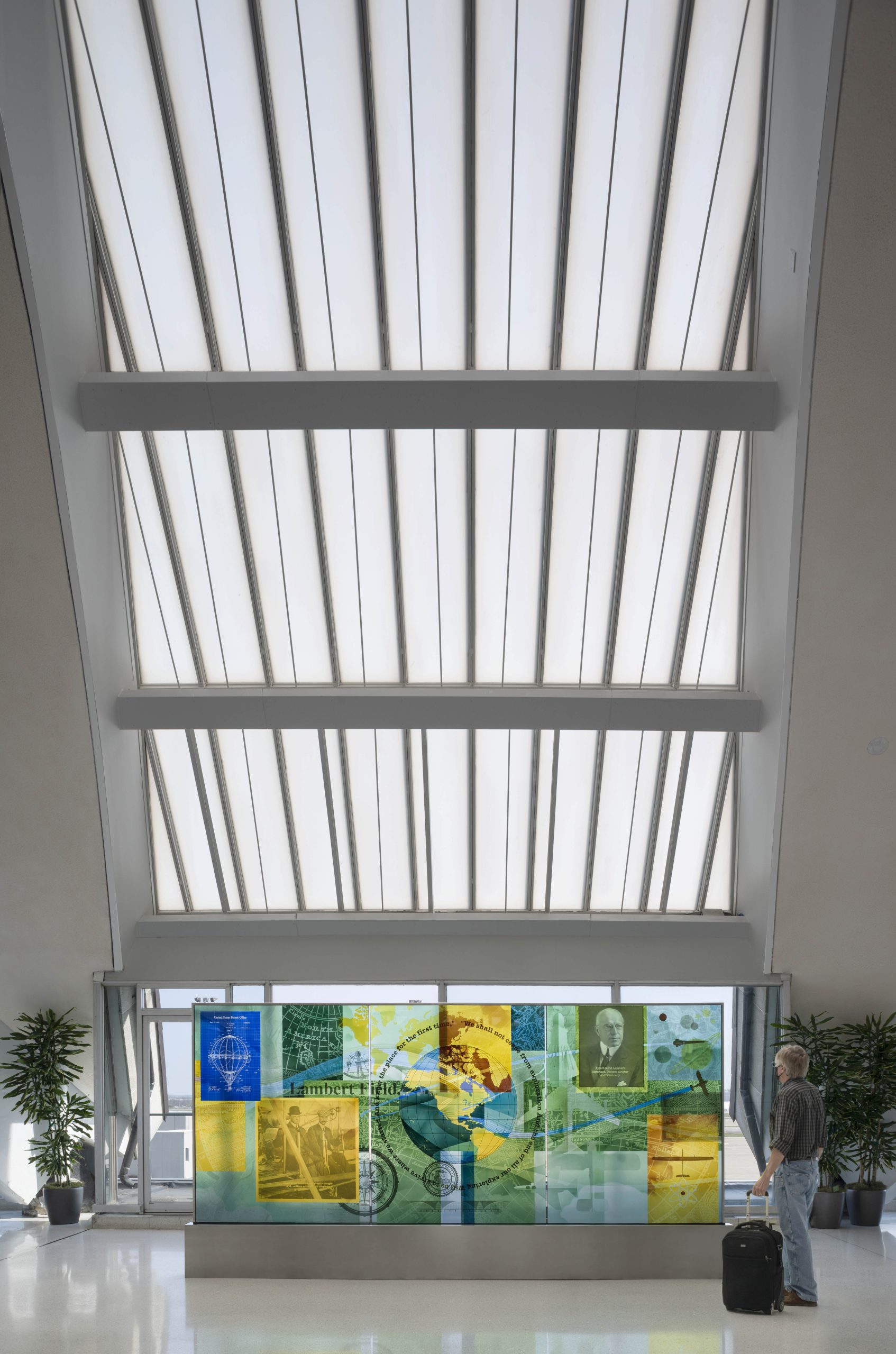 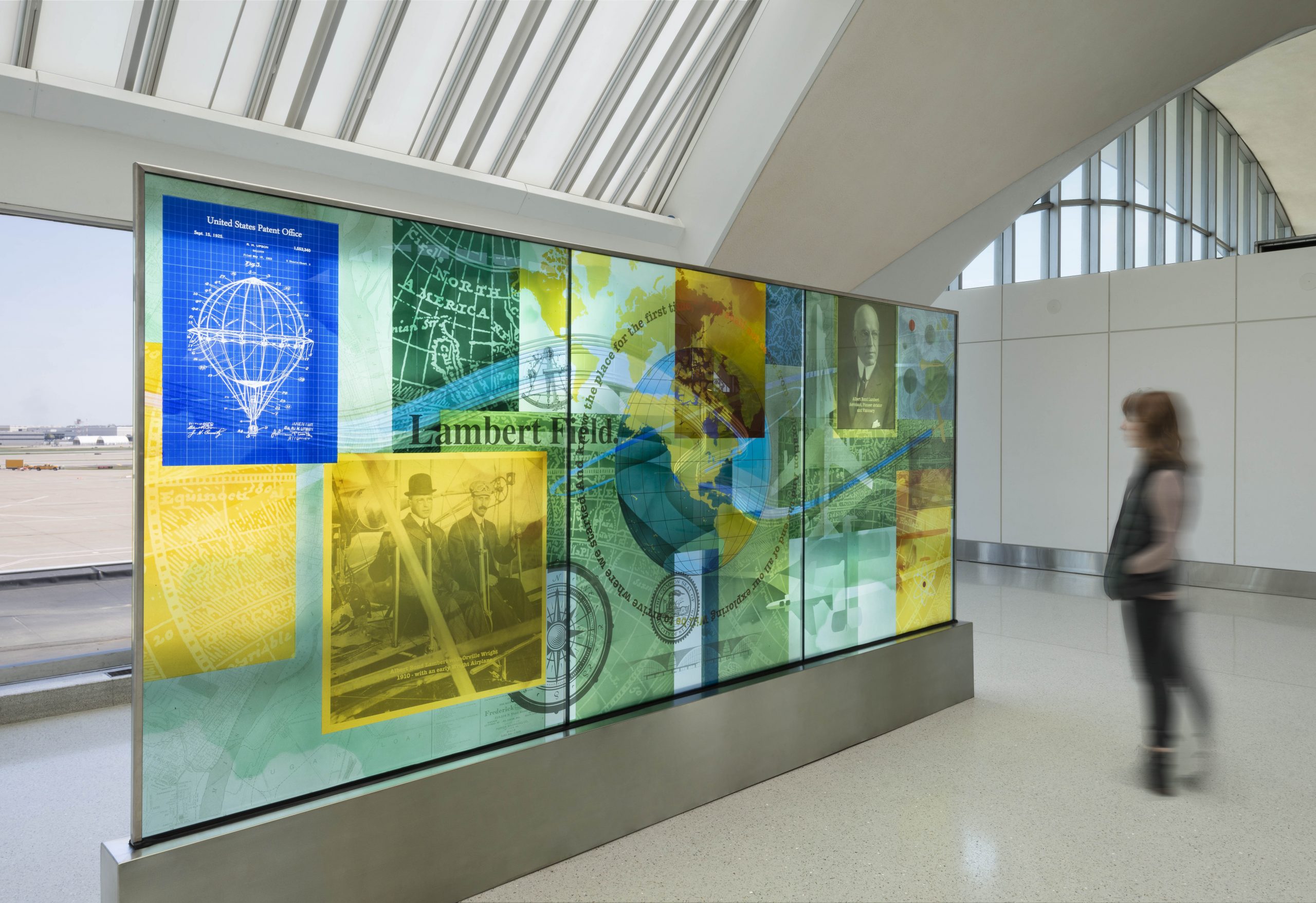 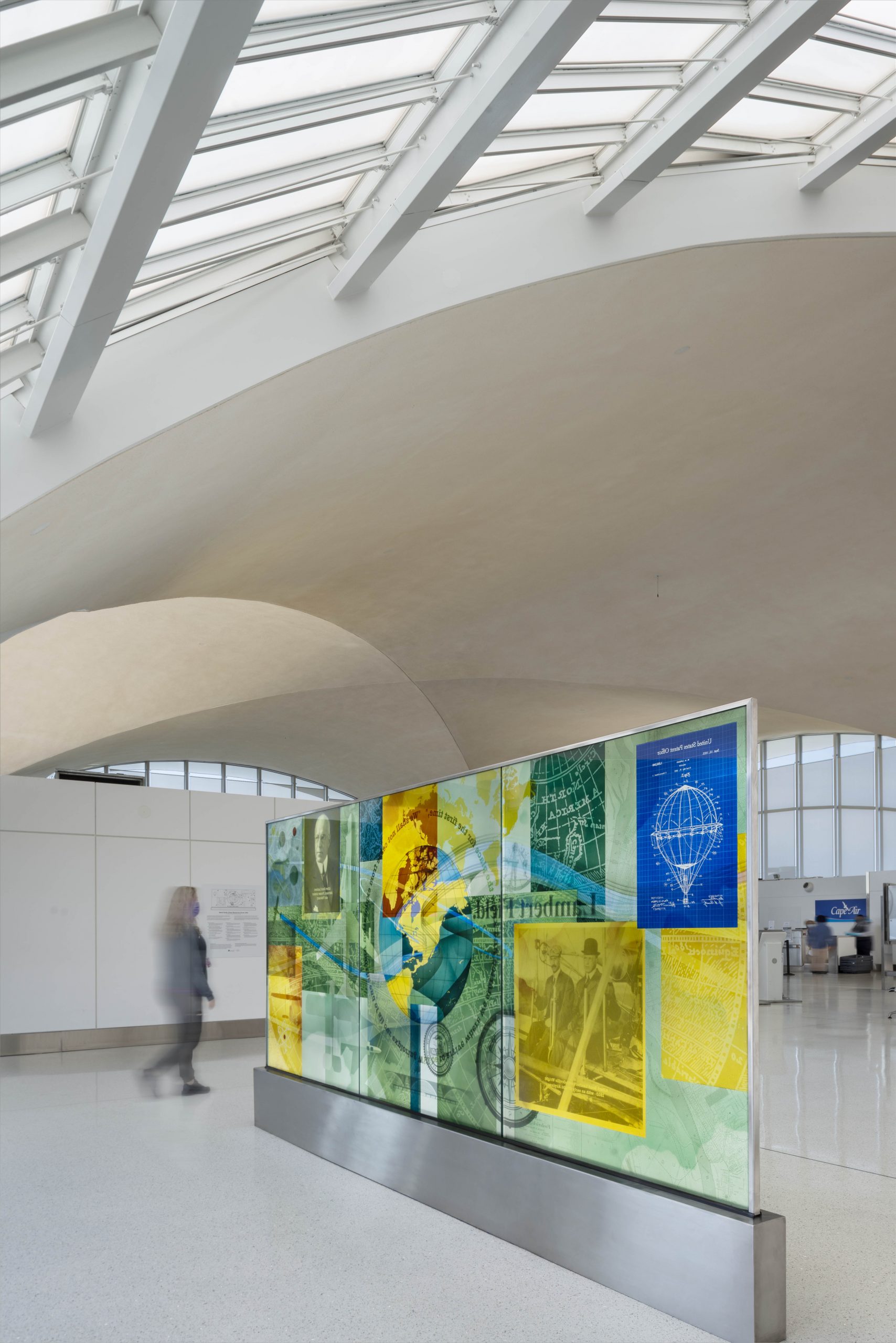 Hand painted ceramic enamel with CNC glass engraving and polishing in Stainless Steel frame.
4.4 metres wide X 2.2 metres high (14 X 7 feet)
To celebrate their centenary the airport have commissioned a commemorative screen to celebrate the legacy of Major Albert Bond Lambert the airport founder and the role of St. Louis Airport in aviation history. Lambert used to organise hot air balloon races on the airfield and he learned how to fly with the Wright Brothers. The organic shaped Terminal was designed in 1955 by Minoru Yamasaki who also designed the Twin Towers in New York.

Images of Lambert are overlaid with historic maps of St. Louis. These scenes could be viewed by the naked eye of Lambert as he flew above the ground, the images then move onto a globe and world map. Finally into the future as represented by the planets and stars. The stars are represented by Lamberts astrological sign Sagittarius – (One of the planets is actually a Golf Ball as a reference to Lambert being an Olympic Golfer)

The screen was a means to celebrate the legacy of Lambert and to tell his story as the founder of St. Louis Airport and his passion for exploration. Further references are a vintage map of trade winds that are layered with navigators instruments the sextant, clock and compass. The Atom is symbolic of the vision of Lambert to look to physics, science and technology as the future and to aid man’s exploration of the sky.

The project was commissioned by St. Louis Airport Authority and managed by Via Partnership. The glass was manufactured by Peters Studios in Germany. The glass is triple glazed and all painted by hand on 3 separate surfaces, with CNC engraving on the front layer.

The poet TS Eliot was born in the same neighbourhood as Lamber in St Louis and I have included a poem from his meditations “Four Quartets” - “We shall not cease from exploration” There is no evidence that Elliot and Lambert ever met, but I like to think they did.