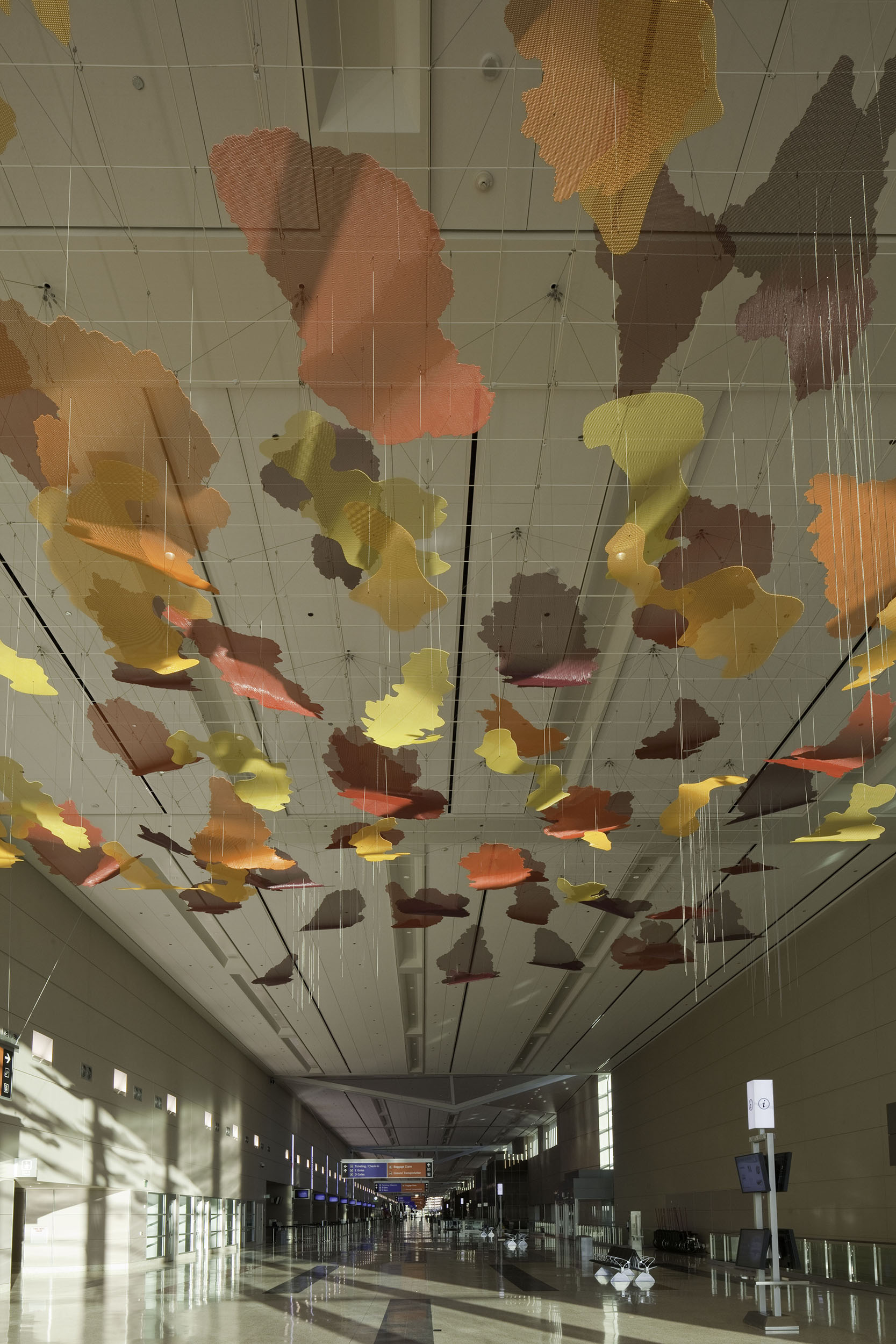 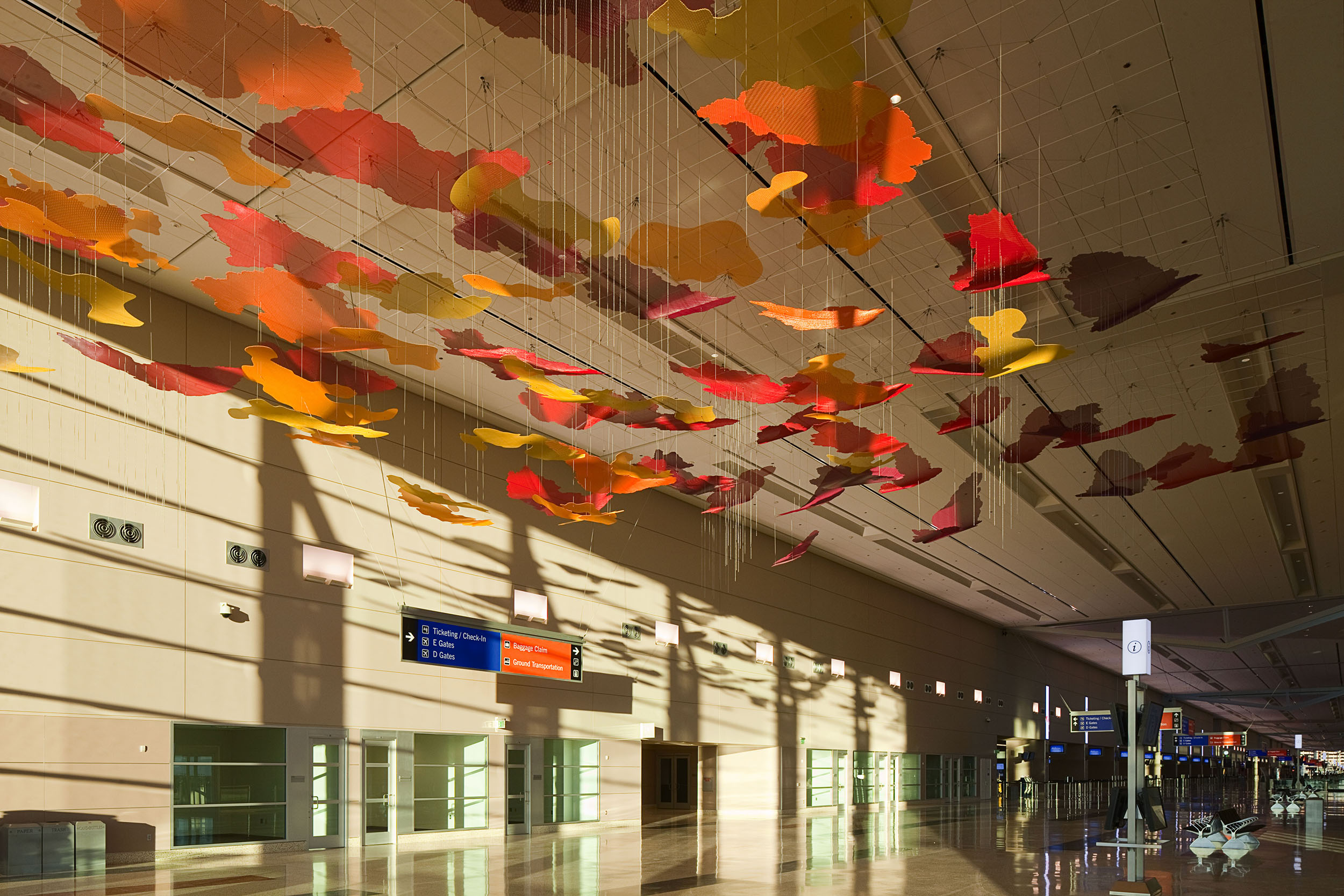 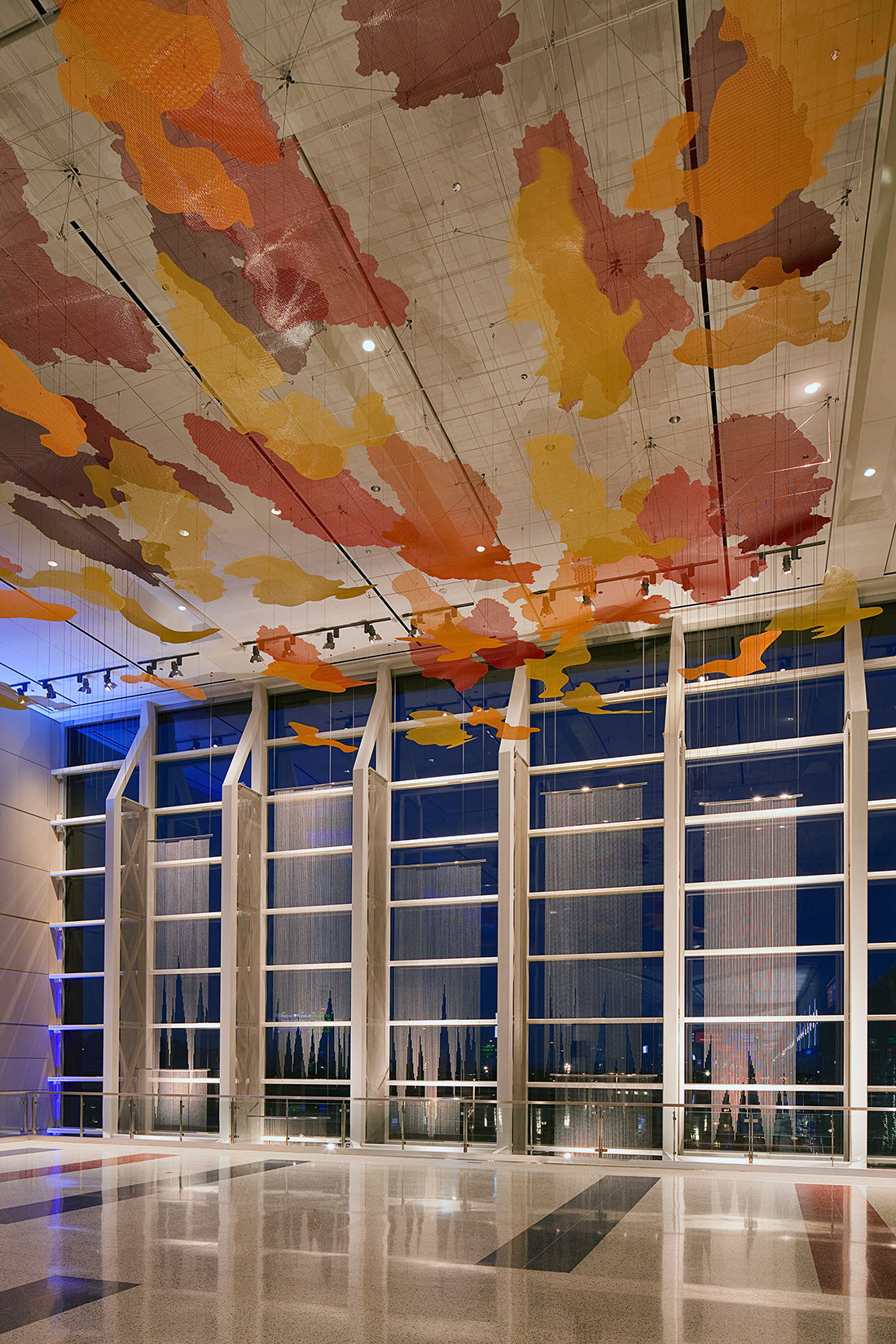 This three-suite set of sculptures was a seven year project, begun in 2005 by my father, Rob Fisher. We worked together on the designs through 2006, when he died unexpectedly. I made the final presentation two months later and was awarded the contract for “Desert Sunrise”, Waterfall” and “Blue Arroyo”, all located in the east wing of the new Terminal 3 for McCarran Int'l Airport. “Desert Sunrise” is a huge cloud bank in the vivid colors of a western sunrise. “Waterfall”, stainless bead chain, cascades down the window wall into the floor below.

The goals were to suspend a large, impressive artwork over the heads on incoming international and national visitors as they enter the second floor of the terminal. The integration of the work into the architecture was a formidable challenge, as the ceiling had been closed up, and we needed to open the tiles to insert a suspension system for "Desert Sunrise" as well as attach a support system along the window wall for "Waterfall", seen in the background. The space and budget dictated the scale of the sculpture, which is 35'H x 75'L x 45'W. There are 65 clouds, made of laser cut, perforated aluminum, powder coated in reds, golds, purple yellow and orange and hundreds of feet of bead chain, stainless steel support cable and hardware. They form a magnificent cloud bank, dripping with transparent veils of gently falling rain. "Waterfall" spills down the window wall into the baggage claim area, where it becomes a rushing "Blue Arroyo", the third in the suite of three artworks for McCarran Airport's new Terminal 3.

After the award of the commissions, I immediately contacted an engineer, recommended to me by my contact at Clark County Dept. of Aviation, Ellen Marciel. Michael Keegan's expertise and willingness to work with an artist was of enormous value. He helped lay out the technical plans for the suspension system, weight loads, and so on. Pat Larson of Larson and Associates of Las Vegas was hired to install the suspension system, which included metal struts from which the grids that hold the powder coated perforated aluminum "early morning clouds" were hung. Steve Enger of Rigging Technologies, Las Vegas, then brought in his crew, with Jody Lyman as forewoman, to suspend the sculptures. It took seven weeks to install these two works, along with "Blue Arroyo" that is on the floor below. The coordination, collaboration and brainstorming between the companies, the artist, and the airport personnel were key to the successful (and sometimes, challenging) installation.

These three sculptures were by far the largest and most complex commission I have done, after the Indianapolis Airport in 2008. It required so much flexibility in decision making, working carefully with other companies and personalities, and careful attention to getting the highest quality of artwork components possible. Each sculpture had its own process, which I have discussed, but it was important that they work together a a whole. I am proud of what I have accomplished and how I have honored my father's legacy and built up my own reputation in the process.