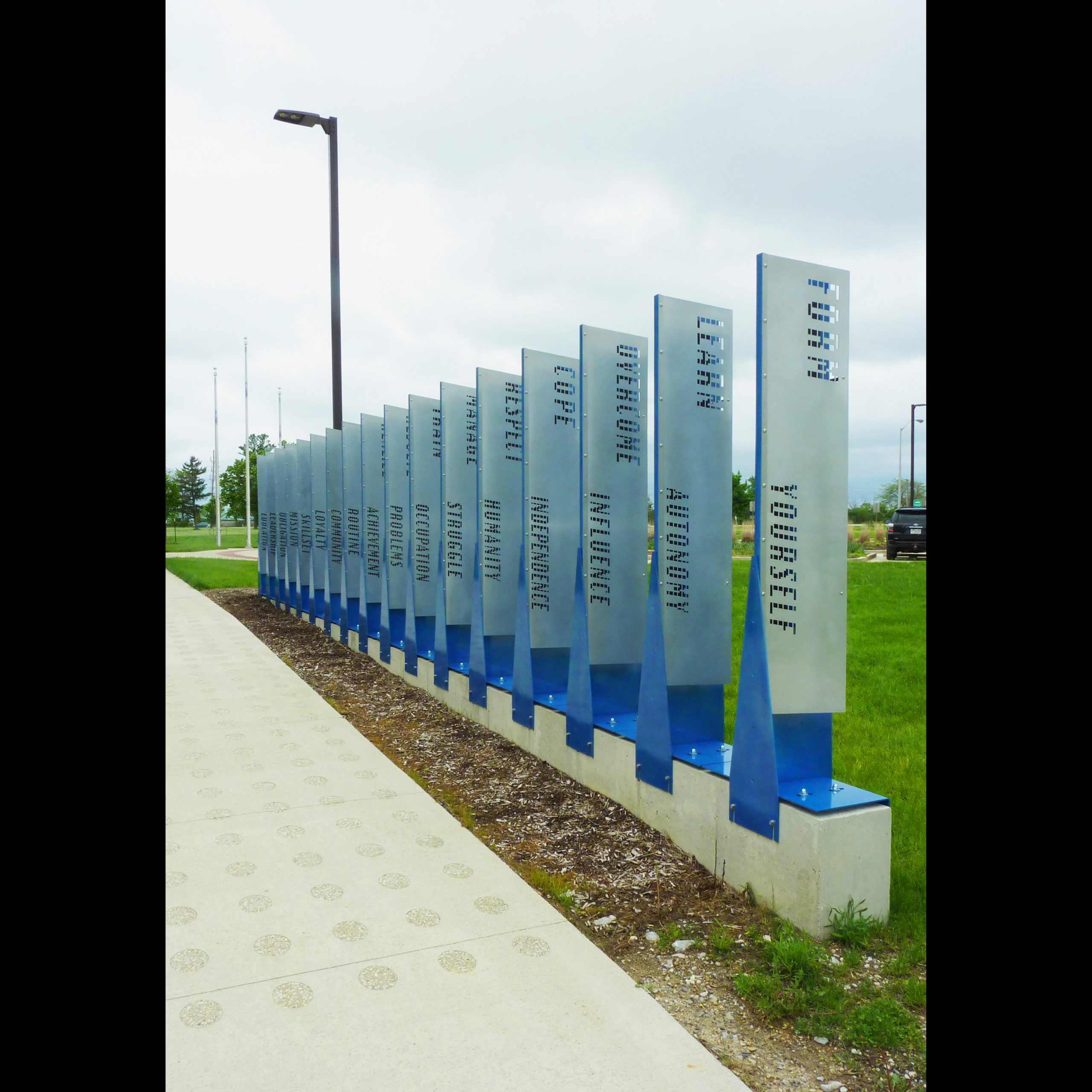 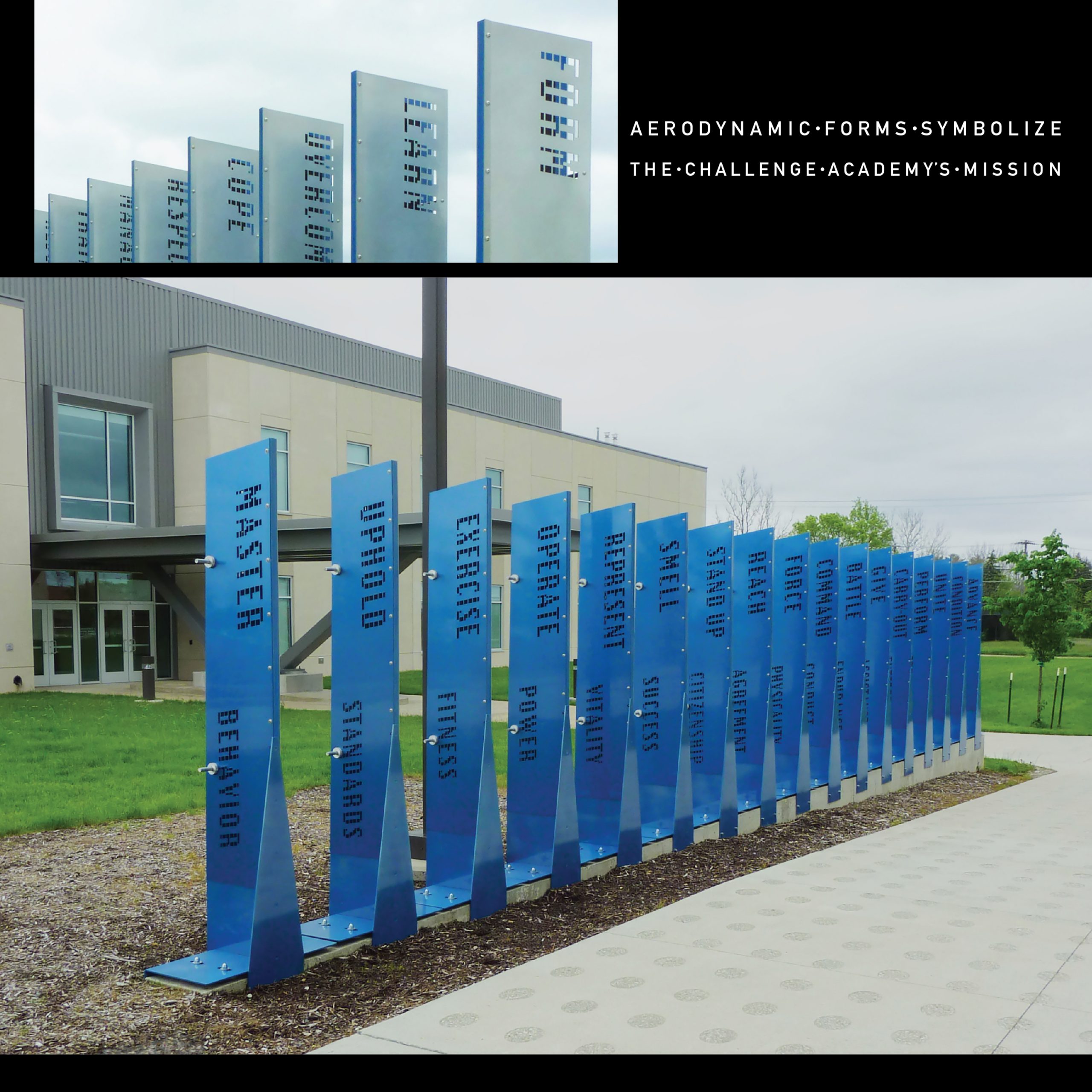 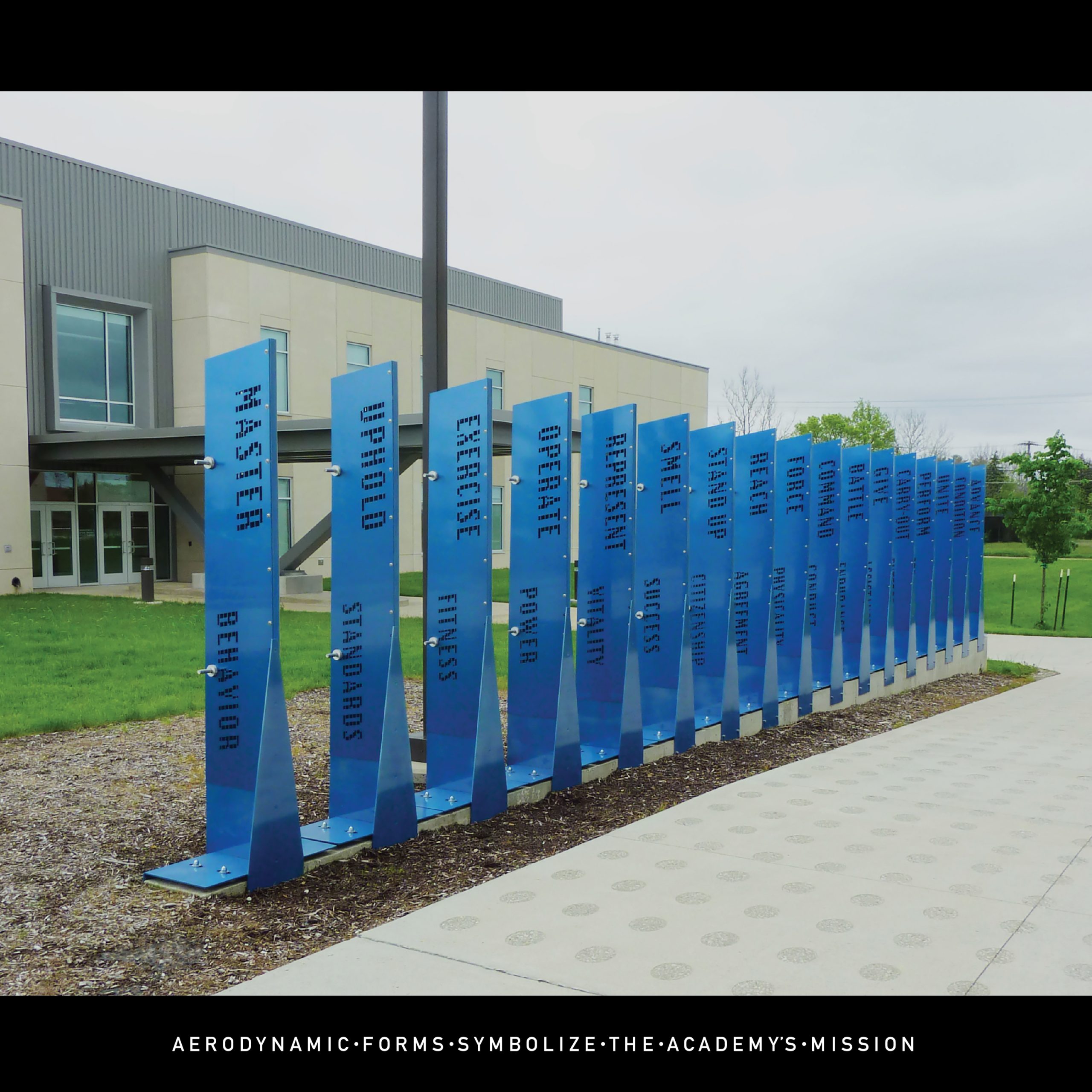 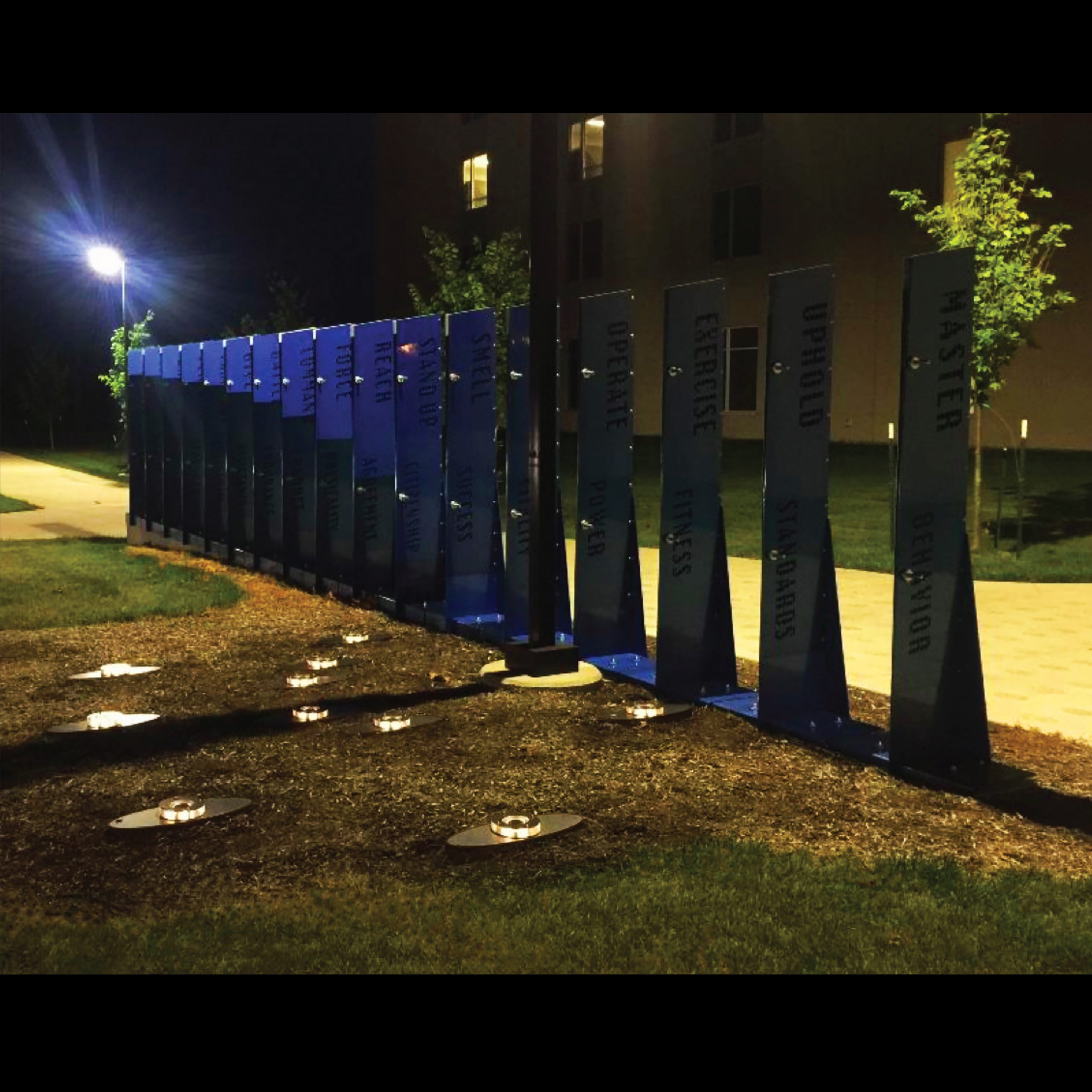 Inscribed to represent the Academy’s mission, aerodynamic forms evoke Chanute Air Force Base, which formerly occupied this site. To symbolize and represent the mission and methodology of this youth intervention and challenge program, this sitework suggests the primal stages of a young person’s trajectory: Before-Life (difficulties with family, community, school and work); Change-Life (experiencing the programs at LCA); and After-Life (a range of life outcomes—ranging from disorder to success). The vertical elements are each comprised of two aluminum panels that are hinged and are positioned so that, in sequence from east-to-west, one surface slowly pivots away from the other surface. Like ailerons on an airplane, they effect a change in direction. These vertical elements are comprised of laser-cut aluminum forms and inscriptions, with metallic powder-coat and automotive paint finishes. The overall size is 40’-0”W x 7’-0” H x 1’-3”D, with a parallel 10’ W concrete walkway that is sand-blasted with a human-scaled configuration. The sitework defines a clear territory in the cadets’ journey to-and-from the Education Building. As young adults get back on track in their lives, it symbolizes what each individual, and we as a society, have at stake.

The primary goal was to visually and mentally represent and activate a portion of the cadets’ everyday routine, moving en masse along this sidewalk from the Dormitory to the Education Building every morning. The inscriptions at the upper leading edges of the surfaces are verb-forms—active words—that suggest self-direction. The inscriptions on the lower edges are noun-forms, to reference the mental realms of knowledge and self-consciousness. When viewed straight across, the configuration is visually very open, suggesting a vision toward a future life—with many possible life outcomes—also symbolizing the vulnerability of a young person who could fall away from the system and regress back into the inertia or chaos of a former life. Although the forms work well with the new architecture, it was even more important that they reflect the mission and methodologies of the Academy, while still articulating a wide range of lived experiences and values.

This commission came about through a competitive RFQ process overseen by the State of Illinois Art-in-Architecture Program. After a number of site visits with students, faculty and staff—while the building was nearing completion—we built an understanding of the goals and processes of the Academy, particularly the structure of the academic programs. Our detailed proposal of the preliminary design was adapted after we were awarded the commission, with a slight adjustment in scale. What evolved the most was the inscribed content of the sitework. Meeting and communicating further with the director, faculty and past students, we developed a structured taxonomy of verb-forms and noun-forms, that are laser-cut through the surfaces, the letterforms connect by parallel lines that suggest the exposed understructure of a traditional airplane wing. The Illinois Art-in-Architecture coordinator provided continual guidance and administration throughout the process, which insulated us from state bureaucracies.