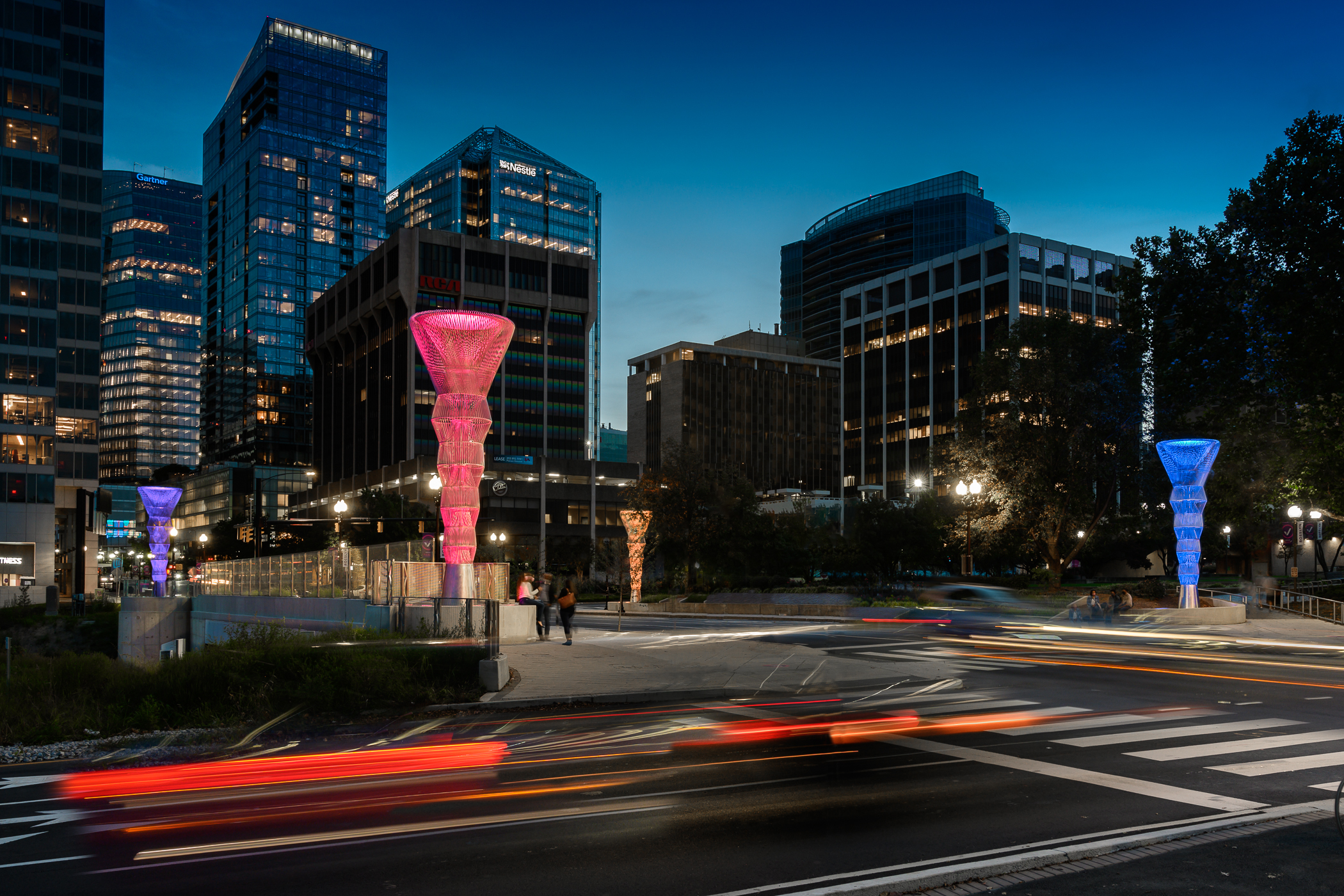 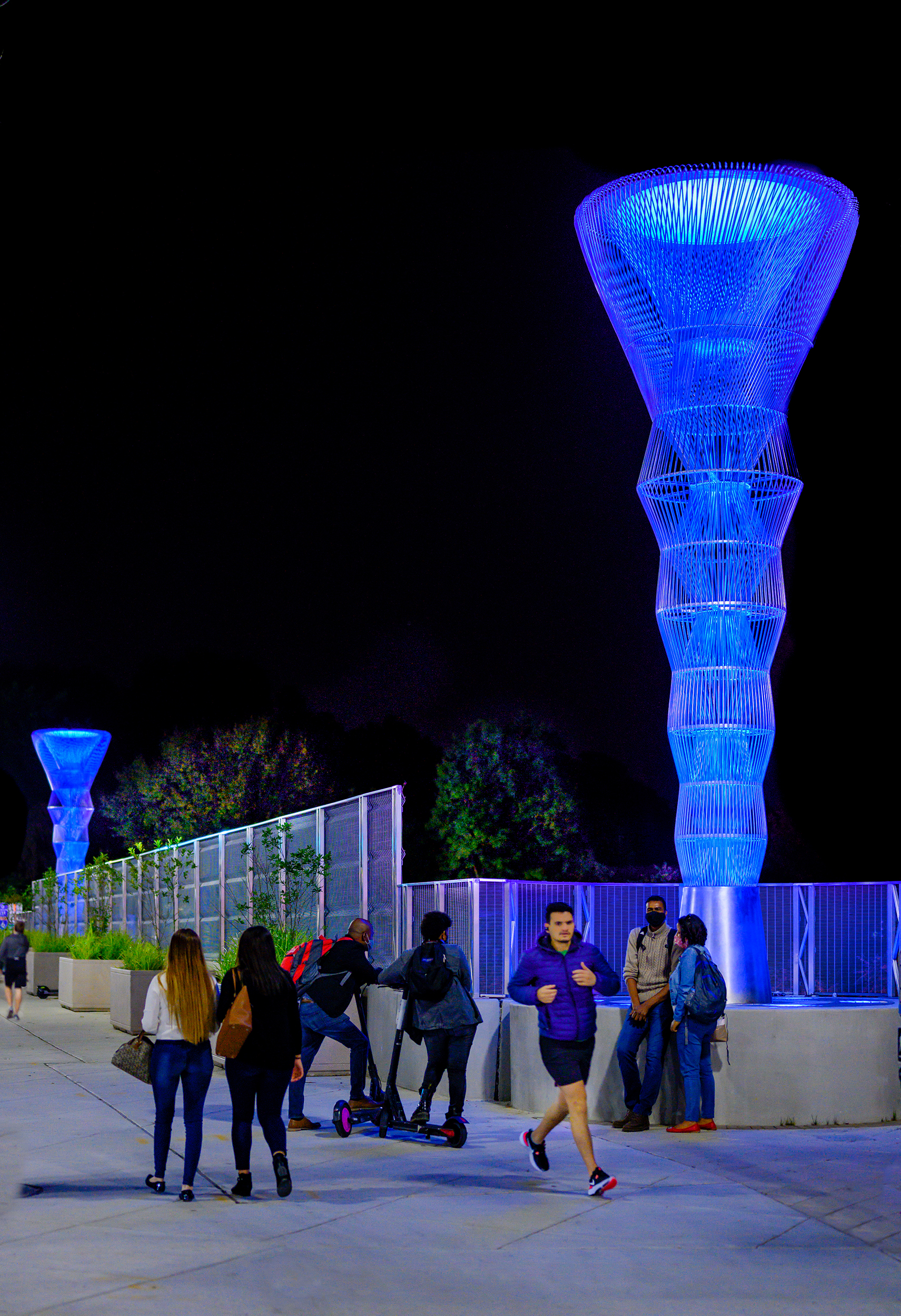 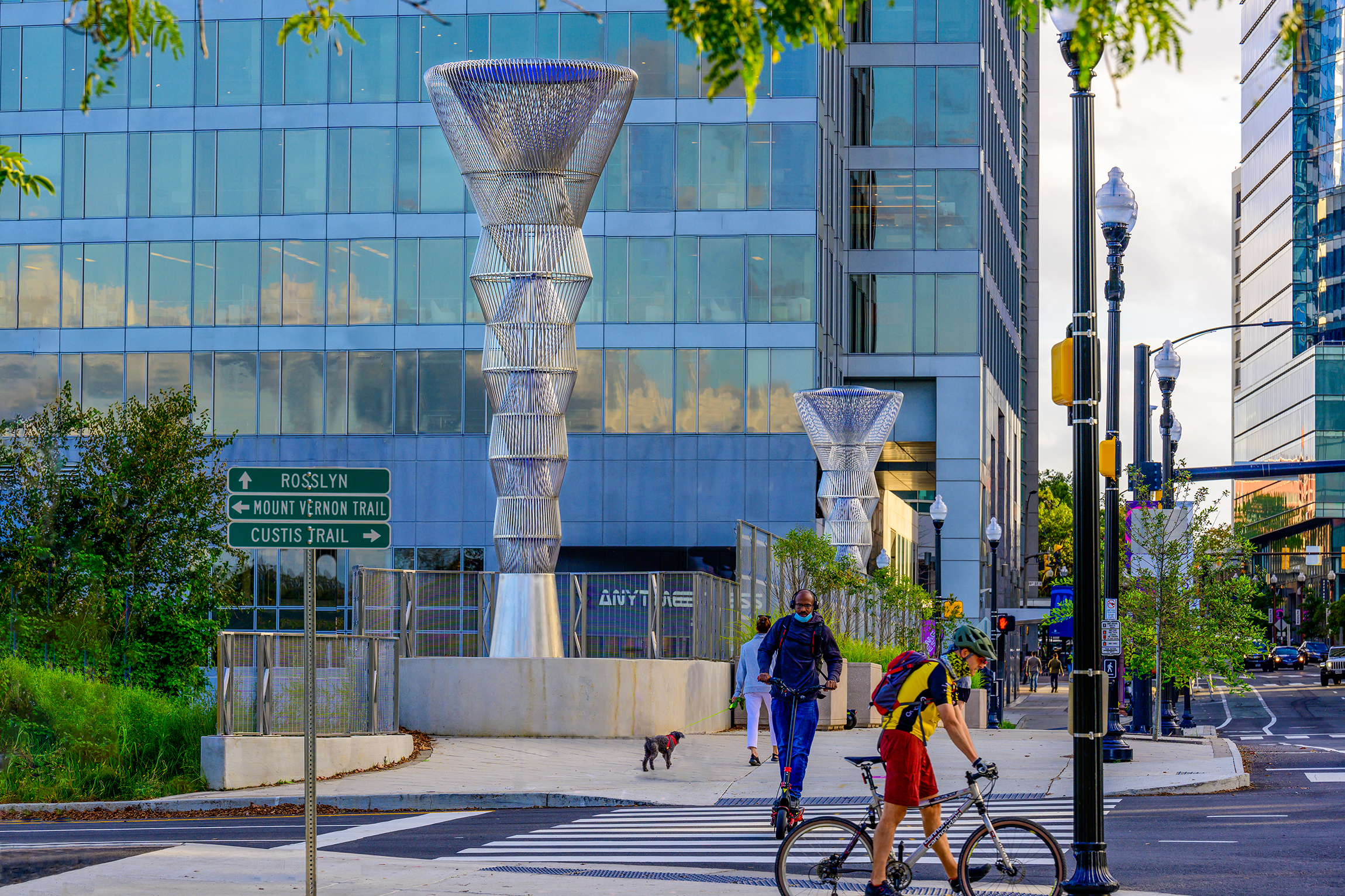 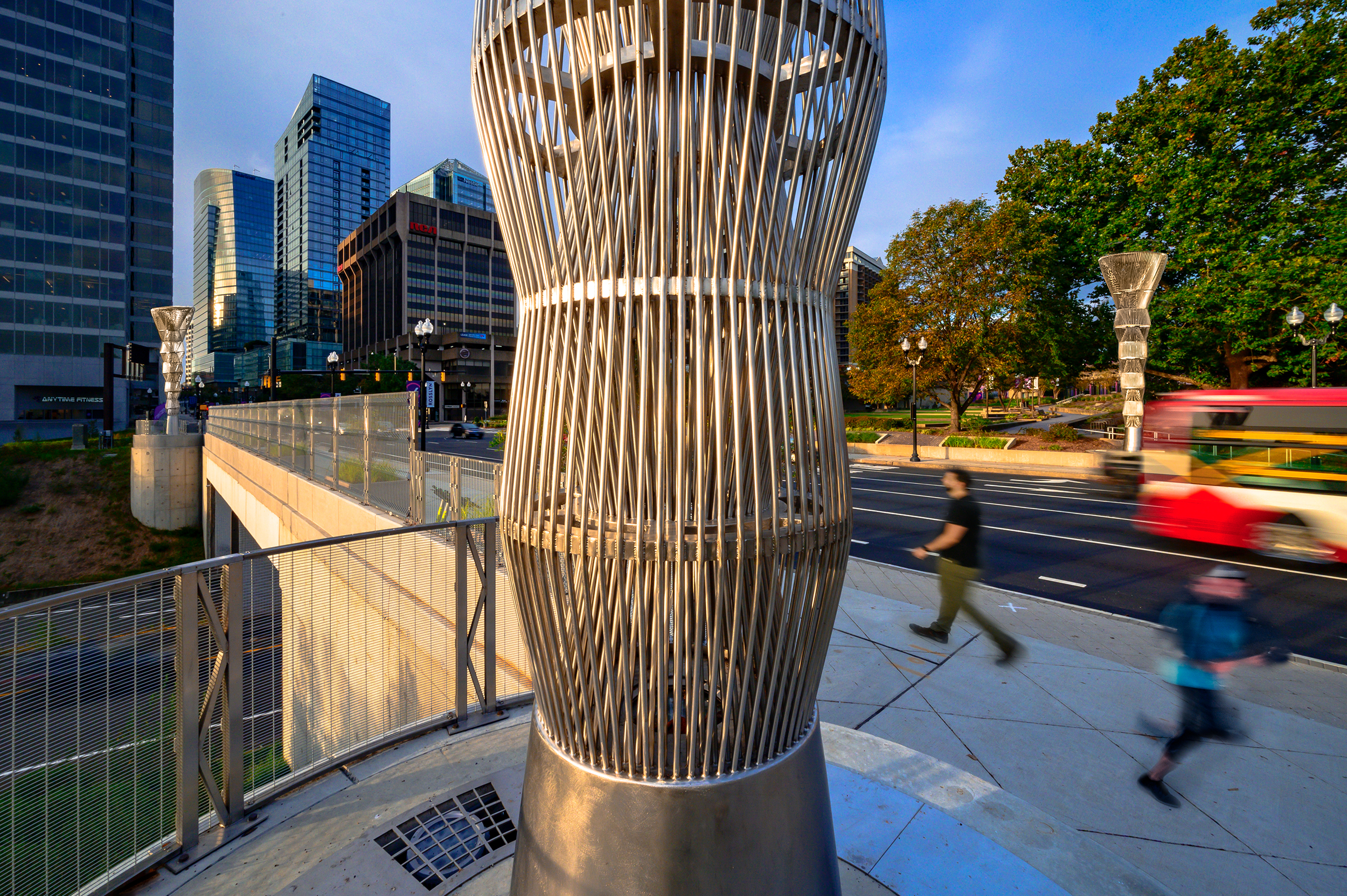 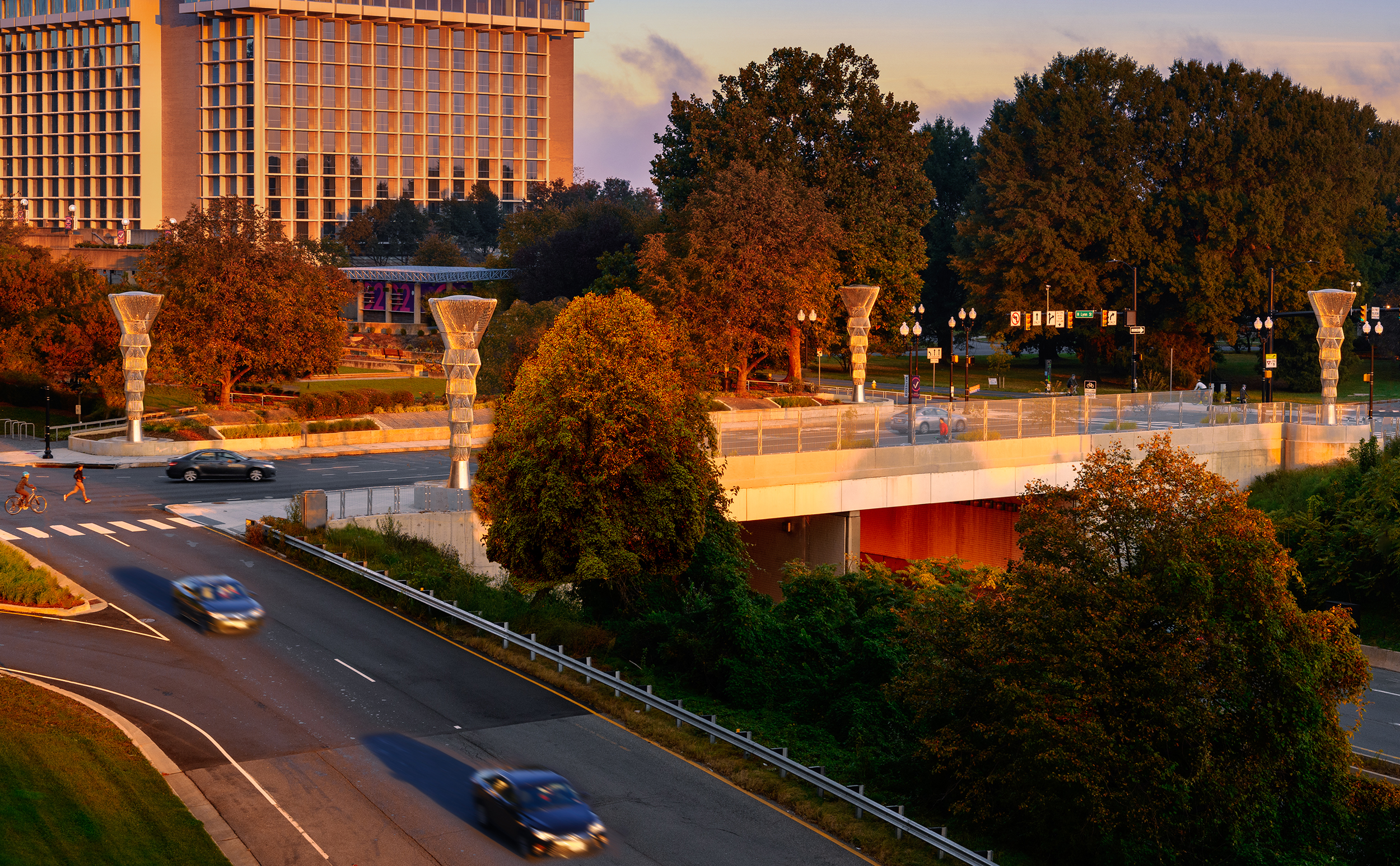 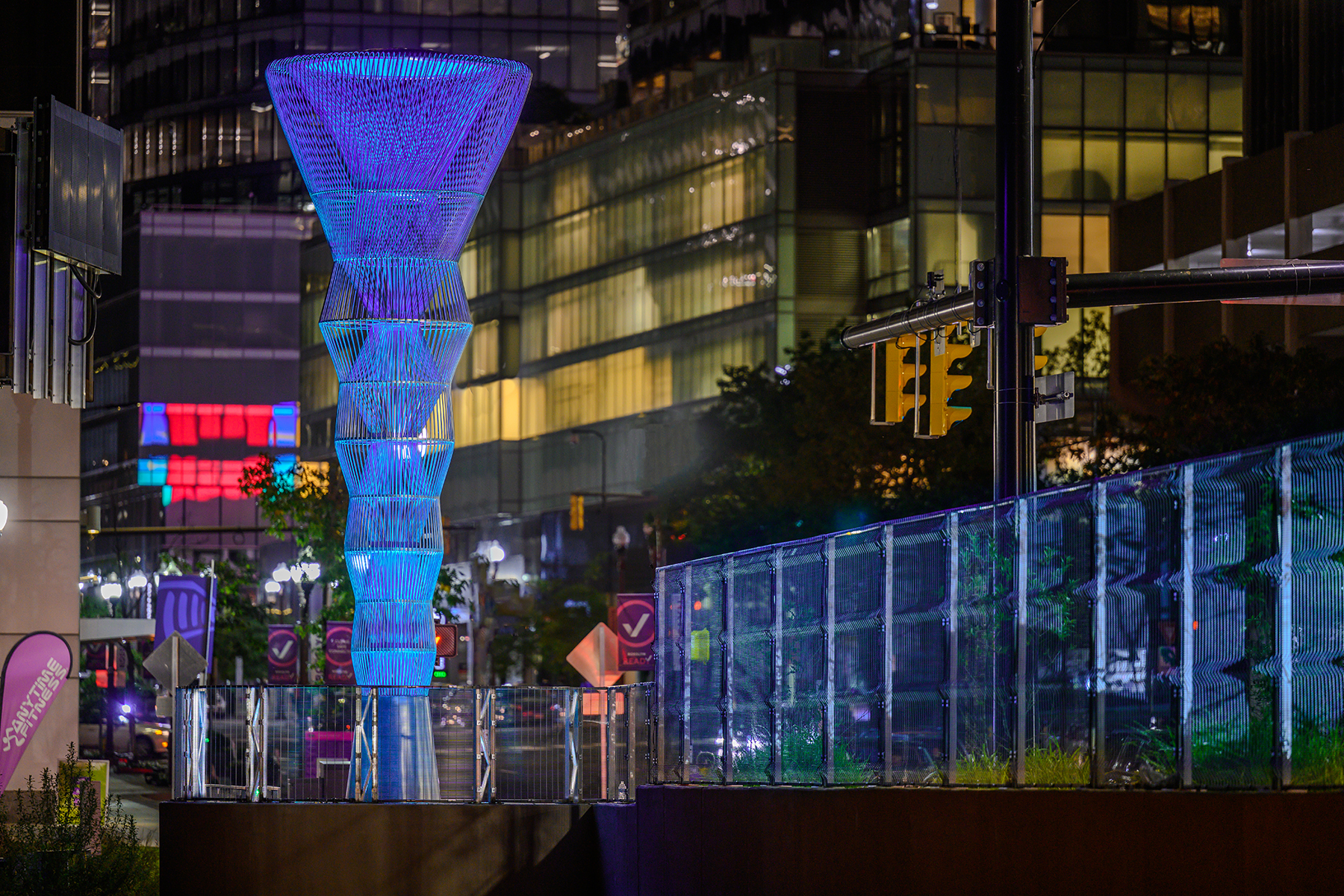 Cliff Garten’s 20 year urban plan for Corridor of Light is a plan for the synthesis of public sculpture and lighting infrastructure, unfolding, as a sequence of changing forms on North Lynn St’s bridges and plazas, in Rosslyn, VA. Twenty-five-foot, tall, illuminated sculptures and a real time digital light show create a series of places and gateways on N. Lynn St. entering from Washington D.C. in the north and from Arlington in the south. The first of these projects is Gravity and Grace, for the transportation hub of Central Place Plaza, located mid-block on N. Lynn St. The second is the Esplanade Bridge in the north and the last will be the Mead St. Bridge, at the south end of N. Lynn St., adjacent to the Iwo Jima Memorial. This bridge will be designed by Cliff Garten Studio with sculptures similar to those on the Esplanade Bridge. The transparent volumes of the sculptures’ inner and outer forms fill with sunlight during the day. Light shows of complimentary colors of LED light take over at night and are refracted by the surface of the stainless-steel rods to produce a dazzling spectrum of color. The artist curated a light show which moves through each individual sculpture and between all four sculptures, activating the bridge and producing an urban gateway in Rosslyn.

Why is our infrastructure so visually brutal? The primary purpose of this project was to show how everyday infrastructure can be transformed through the integration of art and light. This had to be accomplished through a long-term urban plan that had buy in from many different public agencies. Working with only stainless steel, concrete and LED the basic functional requirements of infrastructure were satisfied, but in a way that created a new identity of form and light for the growing district of Rosslyn. The transparency of the sculpture is complimented by the alteration of standard VDOT bridge fencing to create an interesting experience for the pedestrian. Concrete bridge abutment walls were formed to accept the entry sculptures. A sequence of illuminated forms for 1/8th of a mile creates civic infrastructure as art and identifies Rosslyn as an upcoming neighborhood in Arlington. Note the reflection of the red square from Gravity and Grace, on Central Place Plaza, mid-block on N. Lynn St., in the background, marking a series of visually linked places, With the completion of the Mead St. Bridge, south and north entries to Rosslyn will be visually connected to Central Place Plaza, establishing the sequence of changing illuminated sculptures along the Corridor of Light.

The retrofitting of existing infrastructure or the design of new infrastructure is a complex multi-jurisdictional undertaking, which takes time. The public is educated and connections with public bureaucracy are strengthened and enriched. The process of planning and creating this project has a 20-year time horizon. The Esplanade Bridge and Central Place Plaza are now complete and in the next 7 years Cliff Garten Studio will design the Mead St. Bridge and the Plan will be complete. Attaining the long-range plan of enhancing the plaza and bridge infrastructure of North Lynn St. in the greater Capitol area of Washington D.C. is a process of working in a partnership with: Arlington Public Art, Arlington Public Works, Arlington Economic Development, the National Parks Service, The Commission of Fine Arts, the Rosslyn BID and the Virginia Department of Transportation. Before the project began many to these agencies agreed to The Urban Plan for the Corridor of Light authored by Cliff Garten. The process confirms that with a compelling long-range vision we can accomplish the expressive potential of infrastructure that shows us the way to more compelling and livable cities.

Angela Anderson Adams, Director, Arlington Public Art and Arlington Economic Development, who has taken a leading role in the execution of the The Urban Plan for the Corridor of Light stated: “Cliff’s design using stunning formally transparent volumes and digitally linked light shows, stands in contrast to the gravitas of the solid monuments characteristic of the Capitol area and it has been a harbinger of the great urban changes occurring in Arlington County, most recently with the arrival of Amazon’s HQ2. The work Cliff has created for us has been embraced by our community as exciting and memorable imagery, heralding a new identity for Rosslyn’s urban future. It truly shows the role that art can take in transforming our infrastructure and defining the urban realm.”