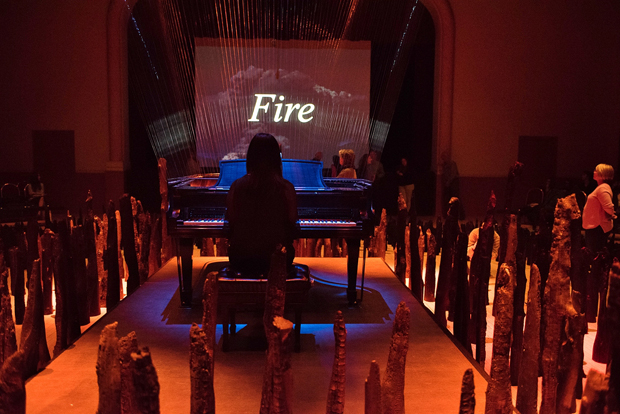 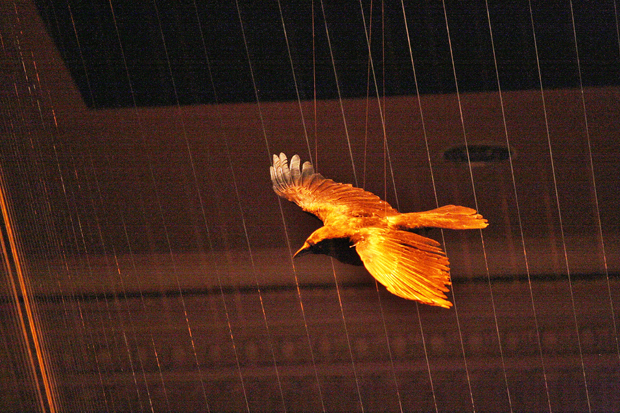 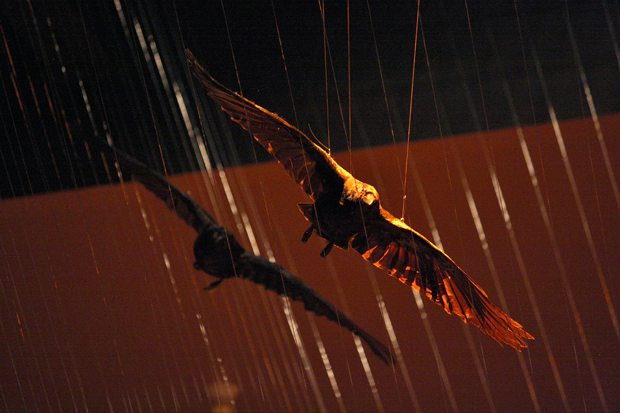 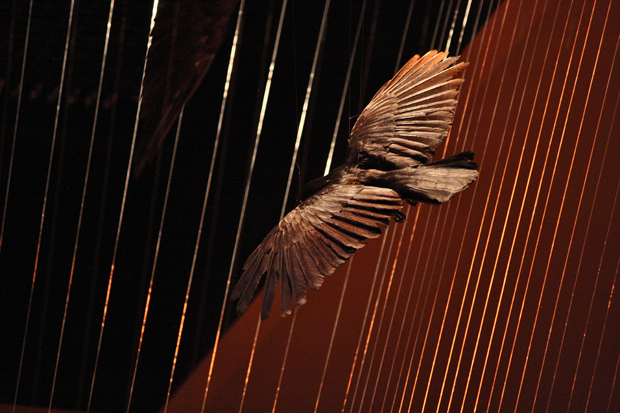 “Composition for Forests” was a place-based installation designed specifically for the Ashurst Recital Hall at Northern Arizona University. Hundreds of lines of filament forming a vortex were anchored into a steel apron that surrounded a black Steinway piano. Soaring inside this form at a height of twenty feet were five crow specimens, kettling as if stirred by the music, their glossy blackness mimicking the piano below. Surrounding the instrument were hundreds of vertically placed charred timbers creating a forty-foot diameter circle with three cardinal pathways. The installation was 48' in diameter x 30' in height.

The primary design goal for “Composition for Forests” was to have a "walkable" concert, wherein the audience would be allowed to move through a performance more closely than is typically permitted at classical concerts. We also wanted to share with the audience the importance of sound fire ecology in having healthy vital forests. This innovative concert expanded the parameters of both art and music while blurring the boundary between performer and spectator. It encouraged the audience to physically engage with the visual and musical compositions. The audience experienced a revelation: seeing music and hearing art while becoming one with the composition and fellow attendees. They were more akin to performance artists as their silent steps and standing postures became an interactive group dance interwoven within the installation. The event would be different at every performance, dependent on the audience’s movements. It was a powerful experience to wander amongst the burnt timbers and to be able to stand right next to the piano and to watch Janice’s hands move from so close, and to be able to sit beneath the piano as she played.

During the opening reception of my 2013 exhibit, “Virga: the Hunt for Water,” concert pianist Janice ChenJu Chiang approached me and asked if I would ever consider having someone perform inside one of my installations. That question initiated a three year collaborative effort and culminated with Janice’s performance inside the installation, “Composition for Forests”. In January 2014, while sitting in Ashurst recital hall listening to Janice perform in a concert, I was inspired to start drawing out the composition for my installation. As preparation, we read The Raven by Edgar Allan Poe, which became the conceptual kernel behind our work. Lenore, the lamented and lost love in the poem, symbolized for us, Mother Earth, as we attempted to make something beautiful out of a natural and at times a destructive event - catastrophic wildfires. In the spring of 2014, we scheduled the installation/performance with the Horizons Music Series sponsored by the Department of Music at Northern Arizona University. In the fall of 2015, I received a Puffin Foundation grant and in January 2016 I received an Arizona Commission for the Arts development grant to help for the preparation of the installation.