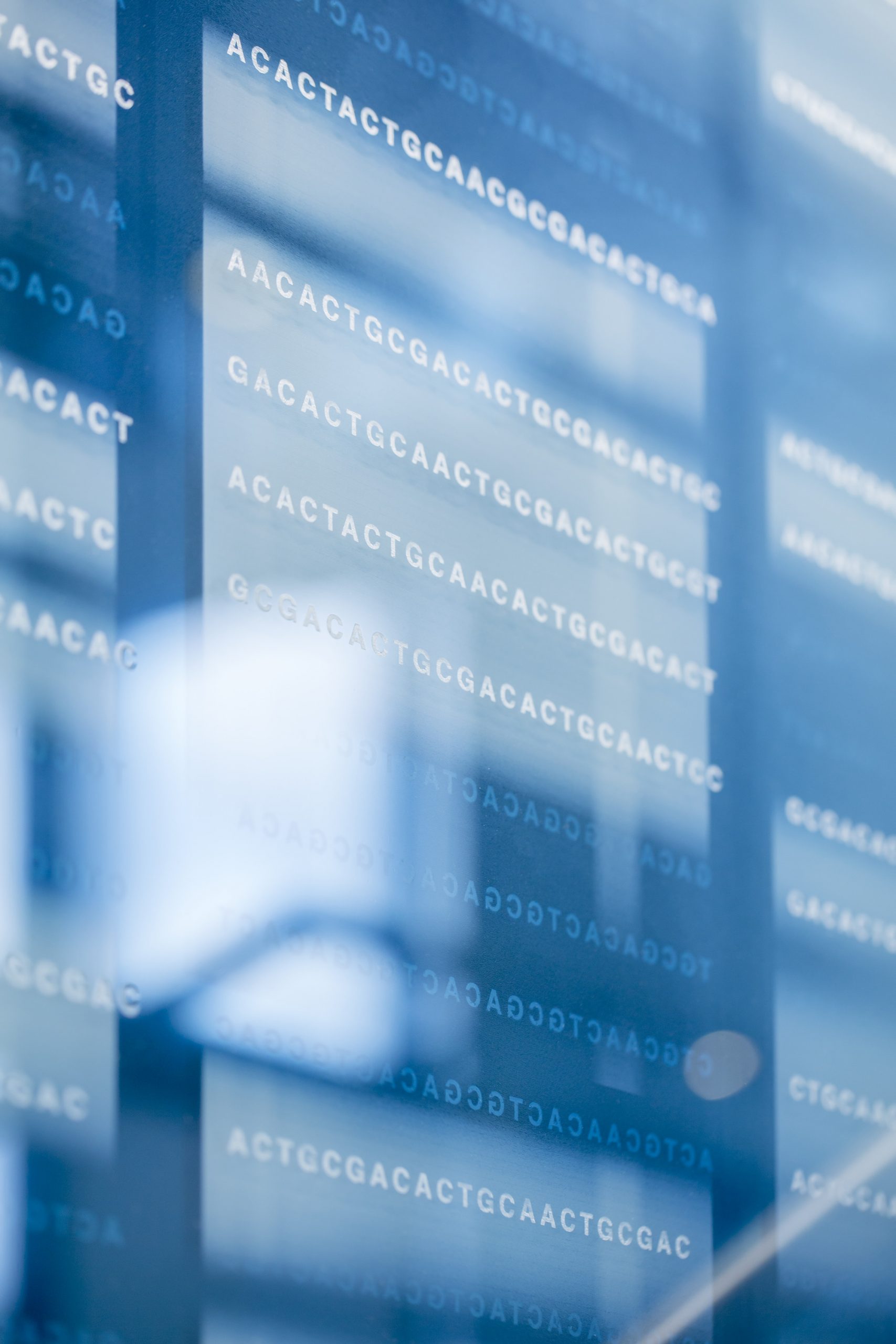 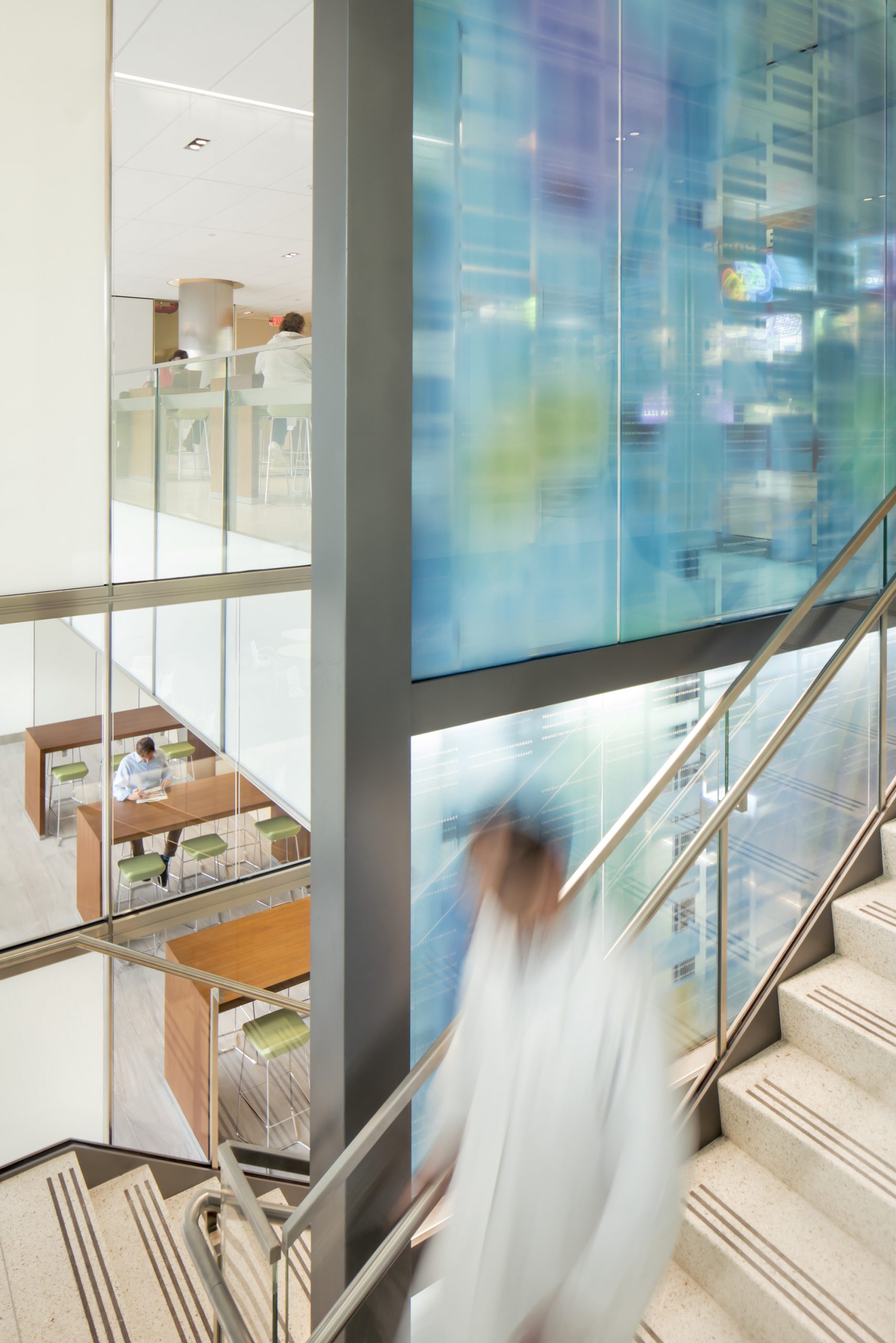 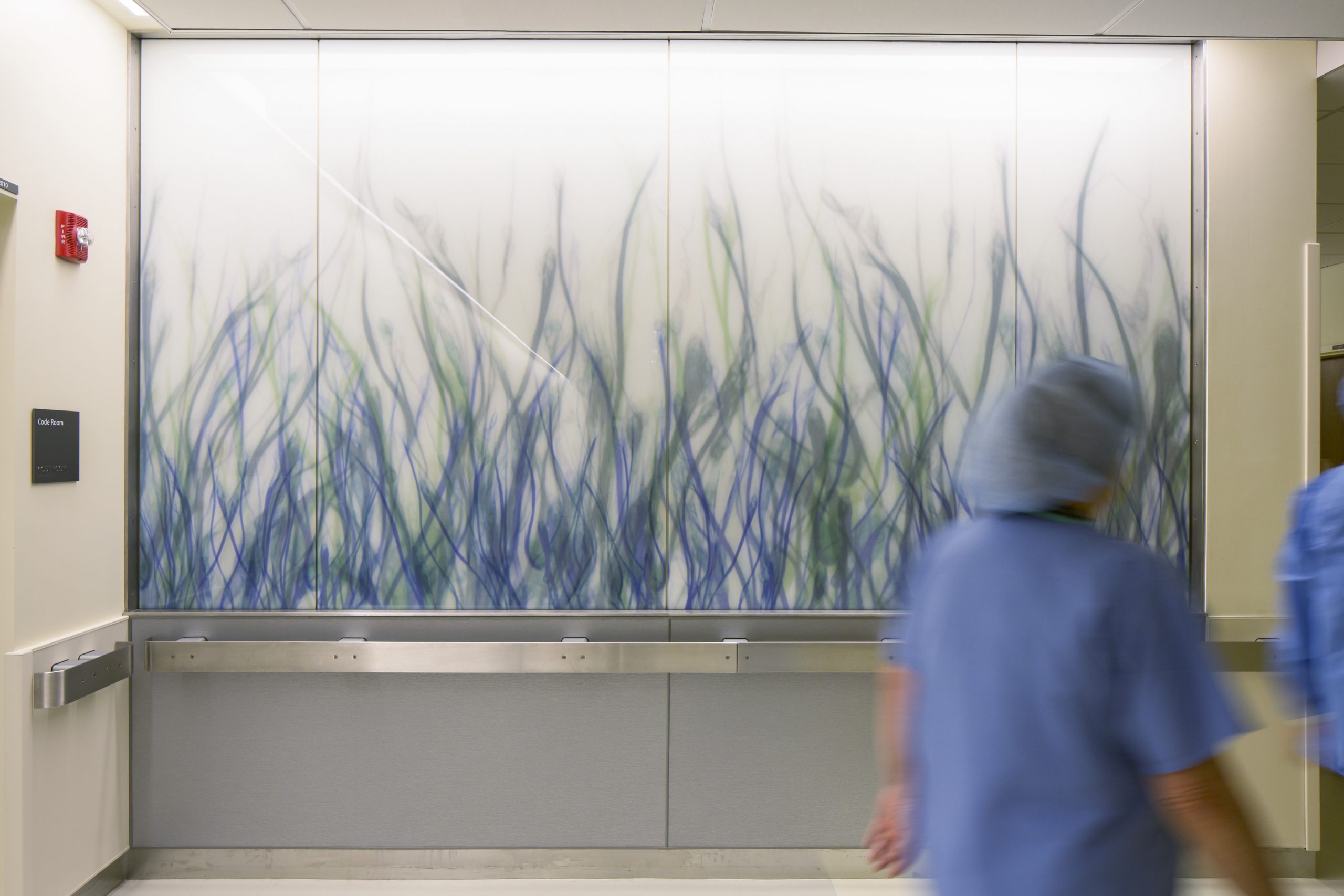 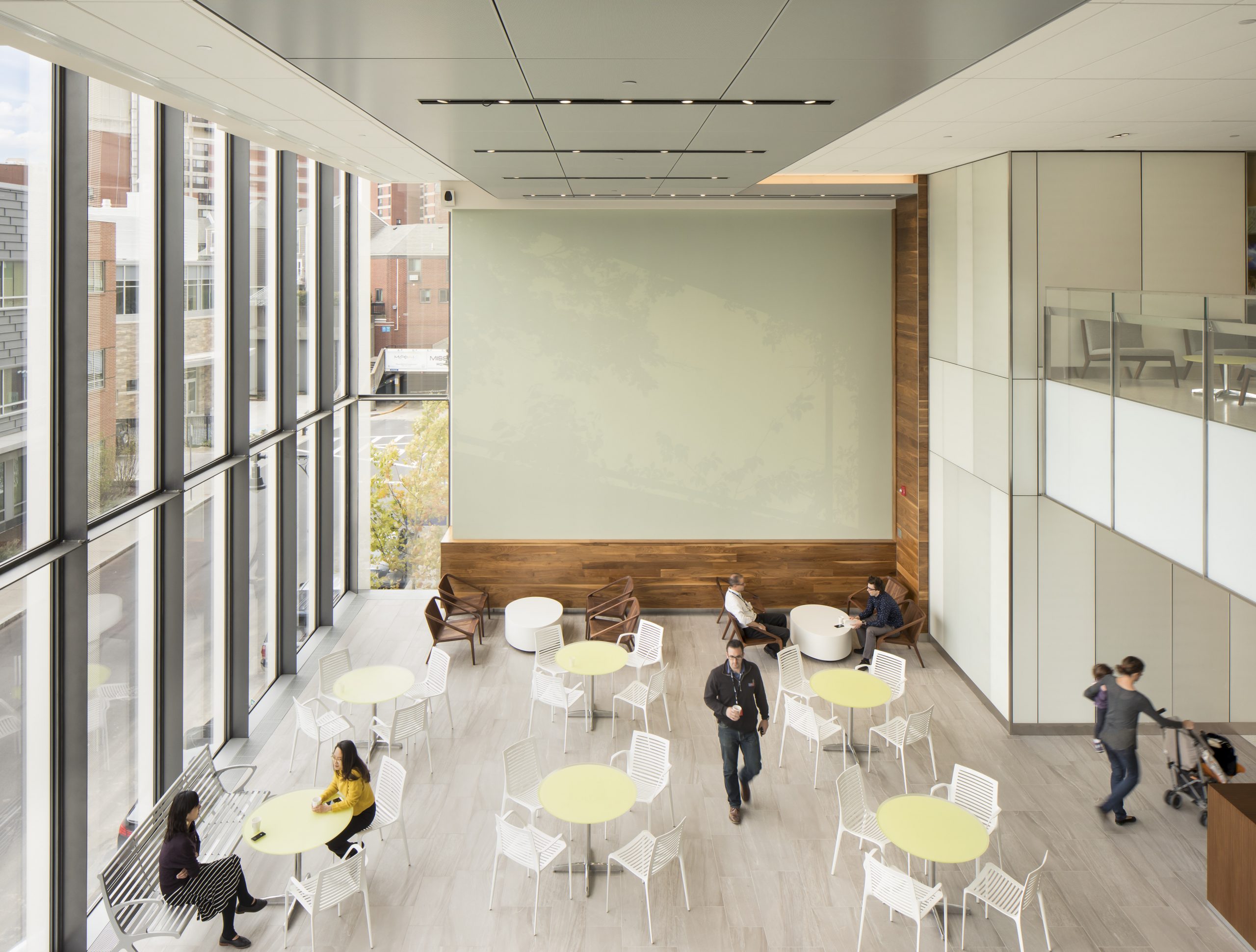 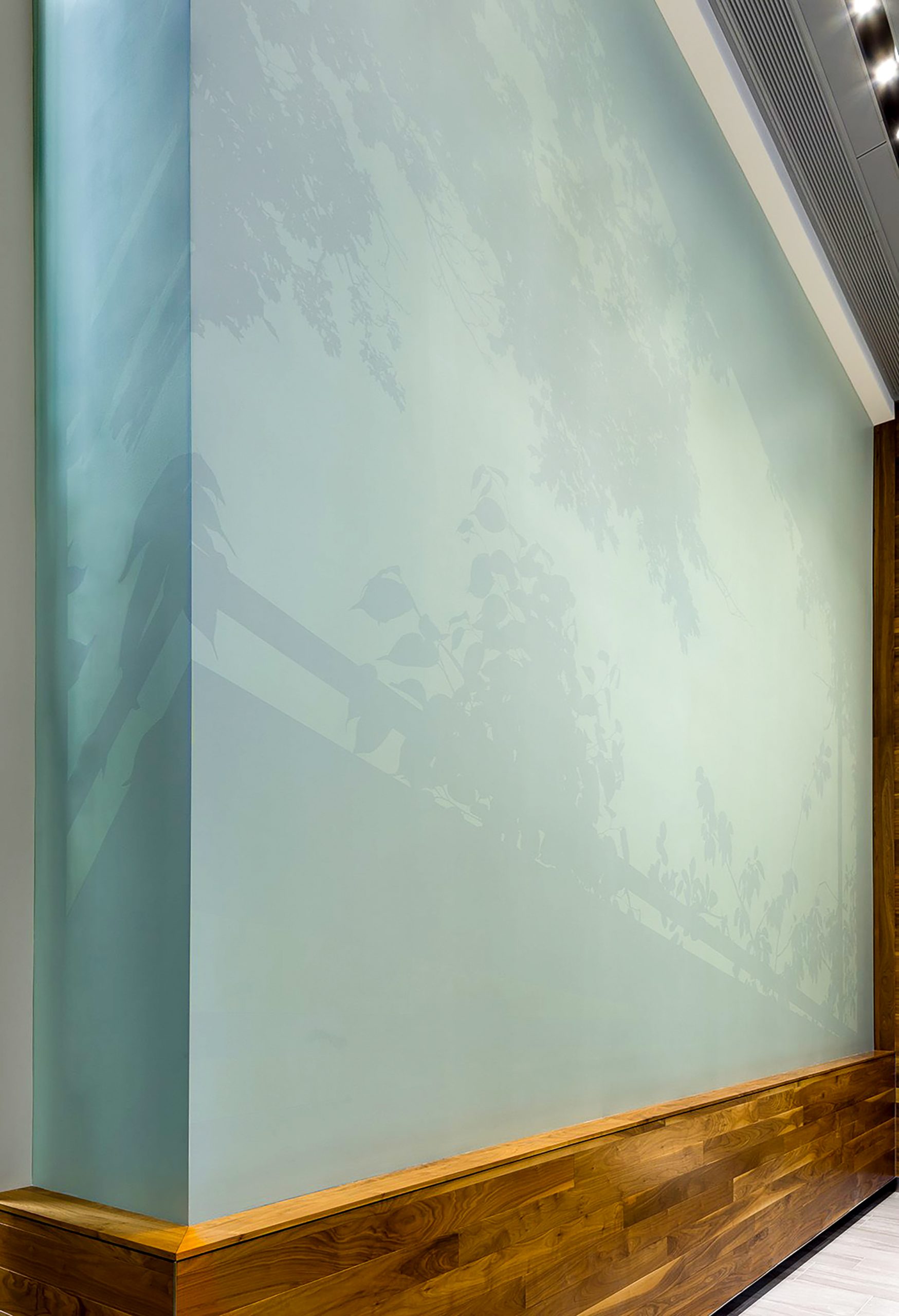 The Building for Transformational Medicine, a research facility at Brigham and Women’s Hospital, combines neurological and orthopedic research labs with outpatient patient clinics. Inside, artwork transcends the typical decorative use of nature imagery in healthcare, by applying insights from neuroscience and biophilia to further the building’s dual mission of research and healing.

First, an art glass wall anchors the staircase linking the lower three floors. From afar it appears as a waterfall; closer in, one sees the distinct banding of DNA sequencing, then the four letters of DNA nucleotides, referencing the research on floors above. Neuroscience research suggests its sparkling blue-green light has a calming effect.
Second, a double-height mural in the café imitates light through trees falling on the wall. The biophilia-based concept introduces the calming effect of dappled light, while also while engaging the viewer's curiosity. Though the image is static, it changes as it mixes with actual shadows cast throughout the day.
Finally, large-scale, digitally manipulated medical photography—one an abstracted photo of neurons, the other a super-magnified image of bone—in the two clinical floors performs a wayfinding function, leading patients from waiting room to clinic and back. The neurons appear to be swaying water grasses and the bone looks like aerial landscapes.

The stairwell glass wall started as a design rendering from NBBJ explaining in detail the concept. The artists at NovoArts, then took the concept and created separate graphic layers proposing how the images would align and with what materials. As constructed, an interlayer of printed film with the color and pattern is sandwiched between two layers of glass etched with the DNA letter sequencing.
The mural began in conversation, as NBBJ's designer explained the intention for the wall. Artist Mary Temple then created design sketches and showed a variety of ideas for the piece. The work was commissioned early enough that the architecture of the wall was modified to allow the painting to fold over the corner, thus heightening the illusionistic aspect of the work.
The wayfinding glass work was a collaboration between architectural designer NBBJ, environmental graphic designer Cloud Gehshan, construction manager Suffolk Construction and fabricator. NBBJ worked closely with Cloud Gehshan to source the original images and perfect the scale and colorization, using several mock-ups and samples.