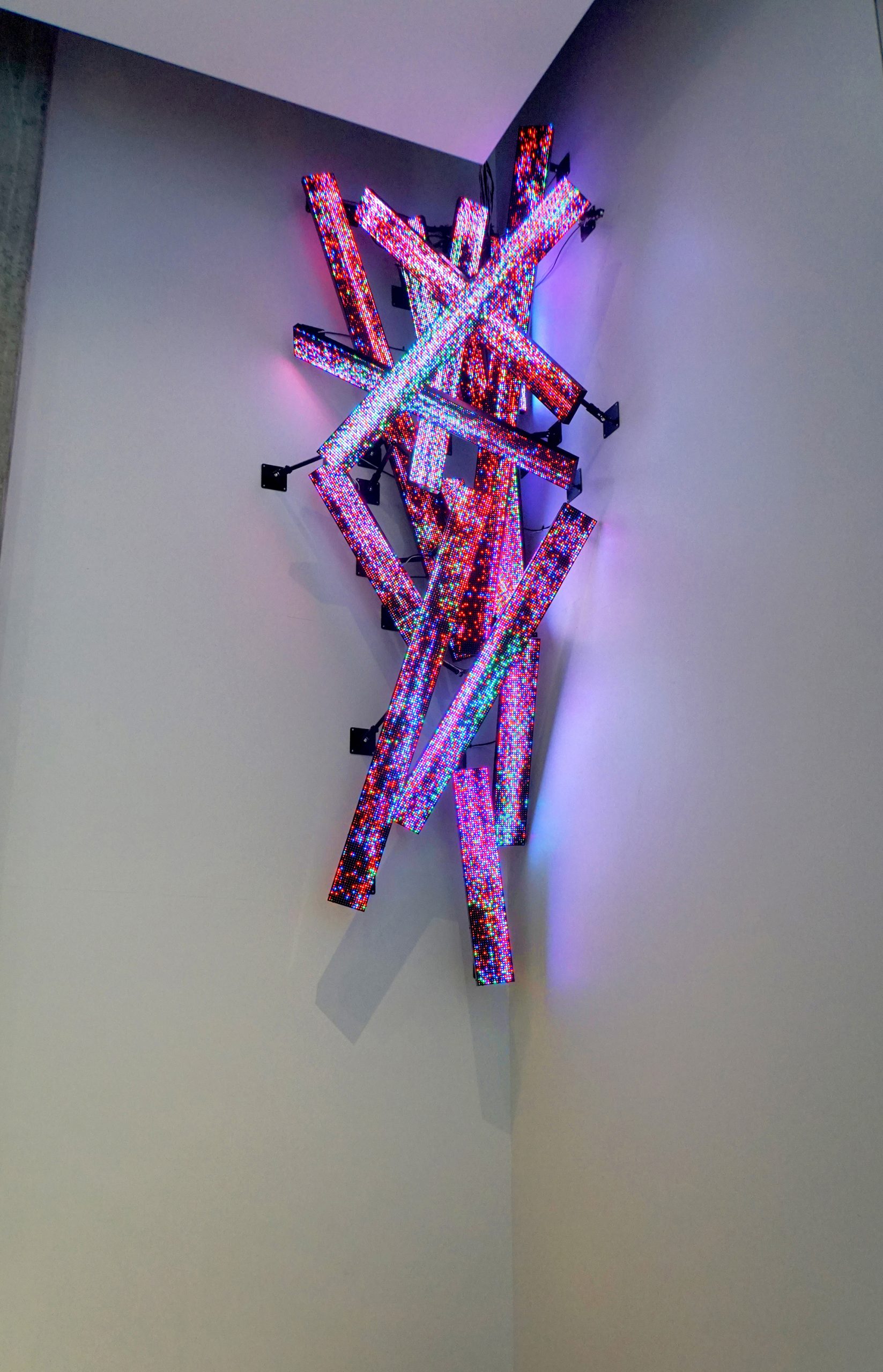 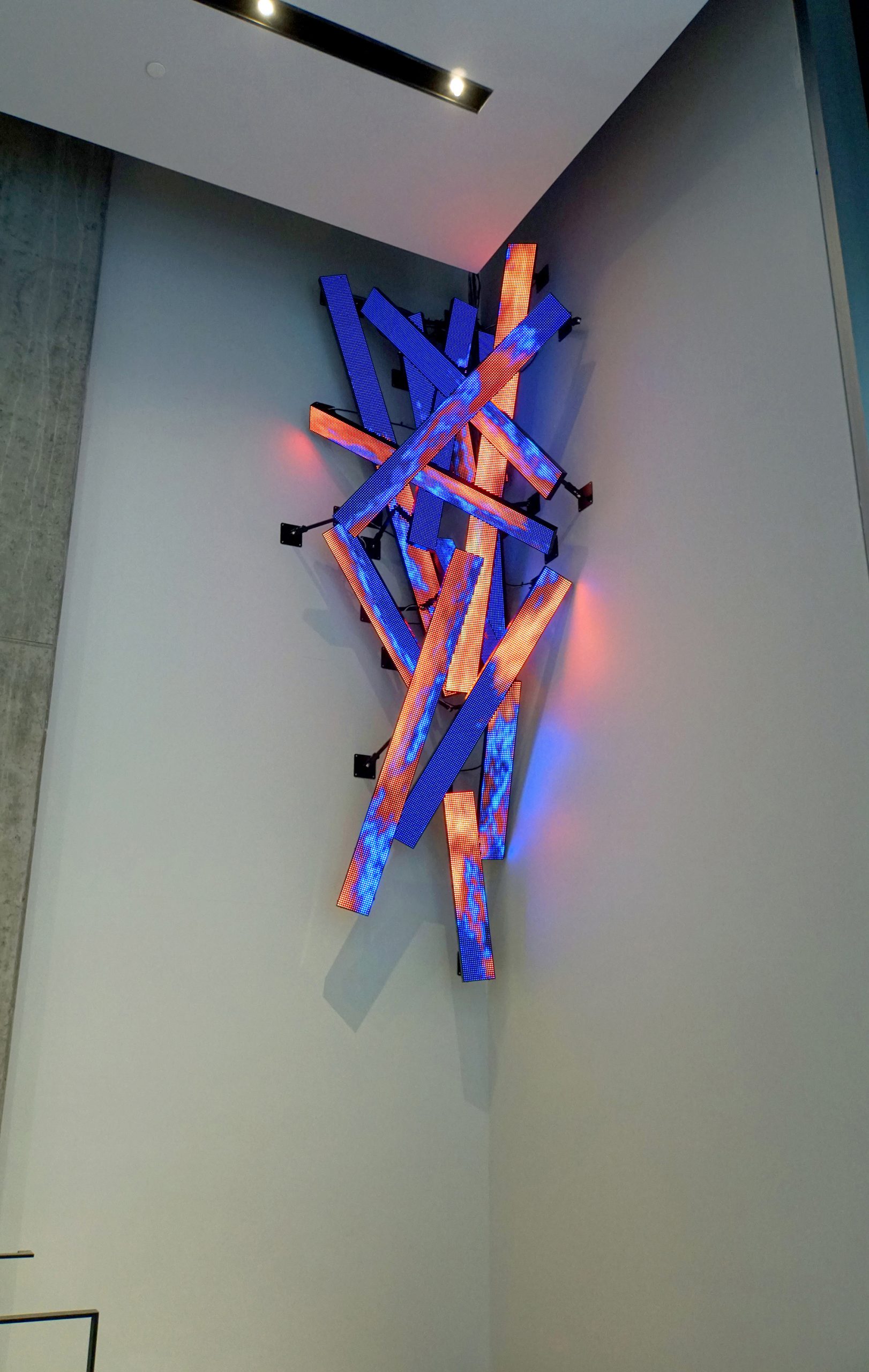 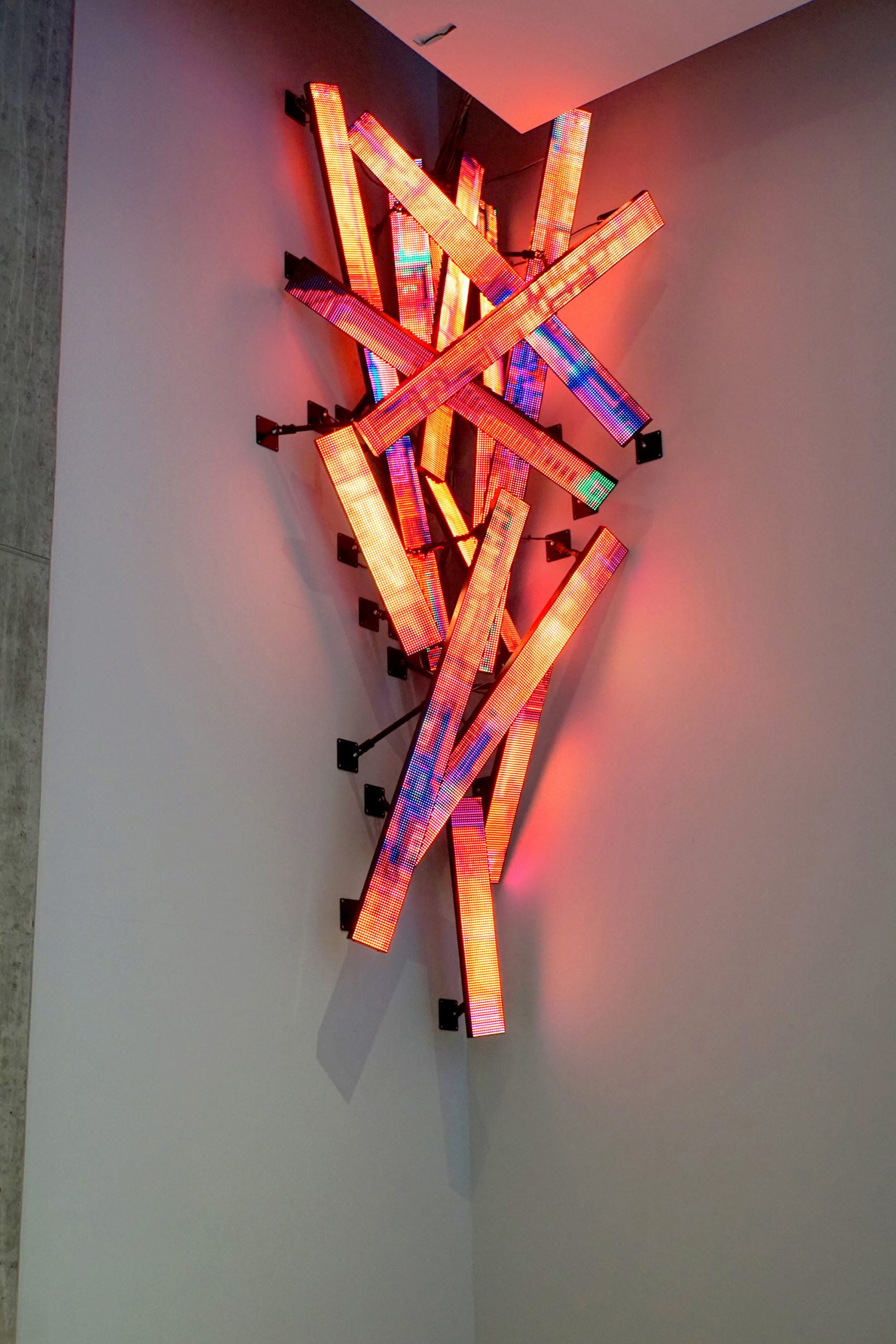 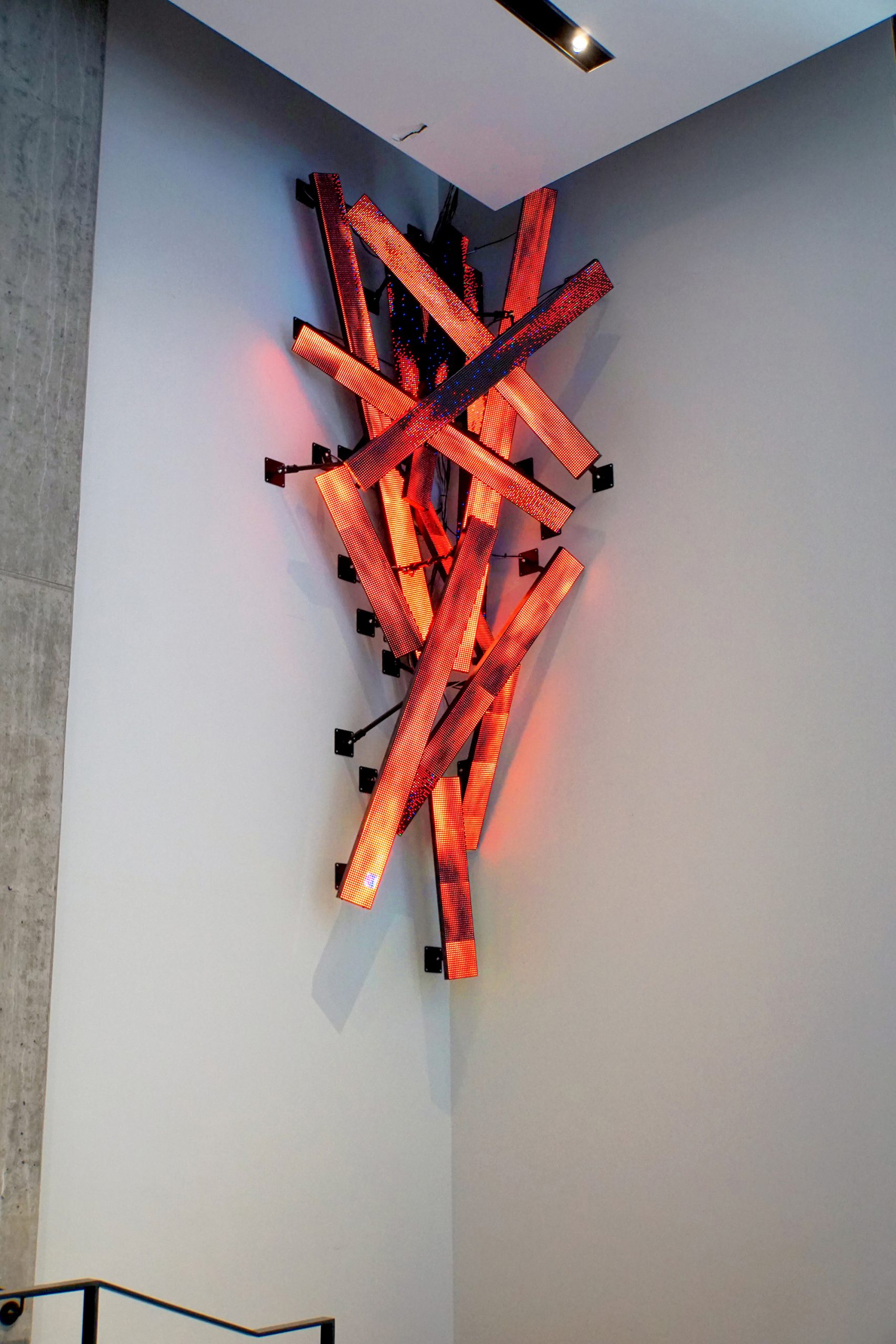 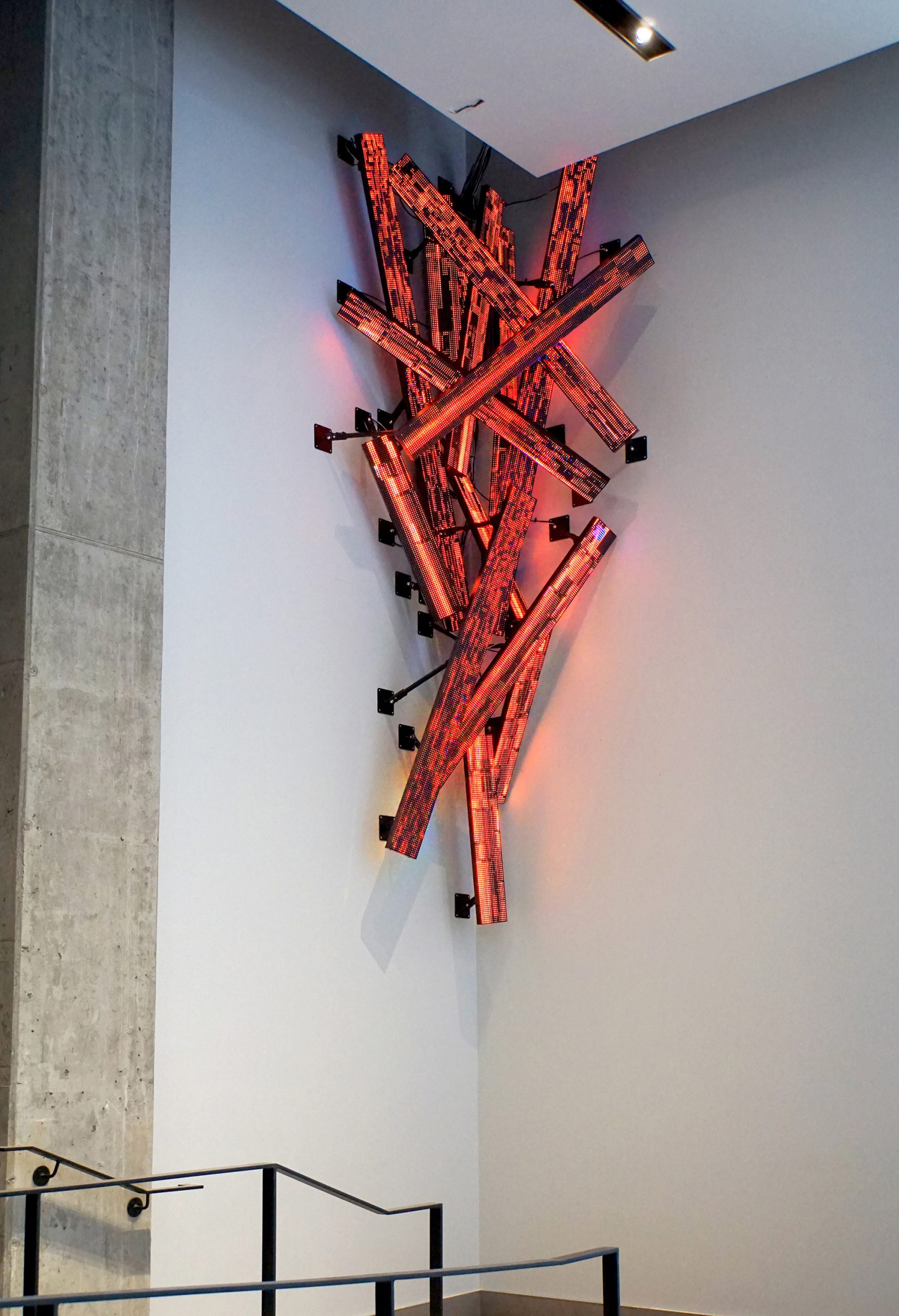 LED matrix boards are generally used for commercial signage, and the long banner type ones, more often for small shops, street vendors and bodegas. They are a ubiquitous, high volume, high impact signage we generally spend more time avoiding than looking at. For this work, I am continuing my use of this form and type of signage to represent our ambivalent relationship with screen-based technology – at once addicted to screens and disturbed by their inescapable prevalence and hold on our daily lives.

While there are central animation forms or patterns, the code is written so that aspects of the animation vary over time based on sets of configuration parameters I set: it runs continuously but doesn’t exactly repeat. For this work it was also important to have some variability in what the screens show over the course of each day – rotating several types of fire animation that intentionally disturb the normal understanding of these screens as vehicles to display advertising or simply act as large video monitors. The intention is for the viewer to both look at the animations as well as at the screens themselves as physical entities.

The Humaniti complex is a large multi-block project in downtown Montreal consisting of a new hotel, condominiums and office buildings. The client is an avid collector of contemporary art and wanted a piece that activated the central lobby to his business headquarters. In reviewing my sculptural work he was interested in the fire-based animation and wanted something in that vein.

I did 3D mockups of the work and produced a series of animation samples before finding a fabrication company. When actually installing the piece I made modifications to the animations to ensure the sense of fire moving up and down through the work was in place.

The artwork consists of 16 long, narrow LED matrix screens that are arranged into the corner of the venue in kind of composition that appears as upward opening as well as possibly collapsing. The screen-pieces are 2 at 2.56m, 2 at 1.92m, 4 at 1.6m, and 8 at 0.96m. Each long bar is mounted to the walls using a custom ball-and-socket steel mount design. The screens are centrally powered and the animation driven by a single PC.