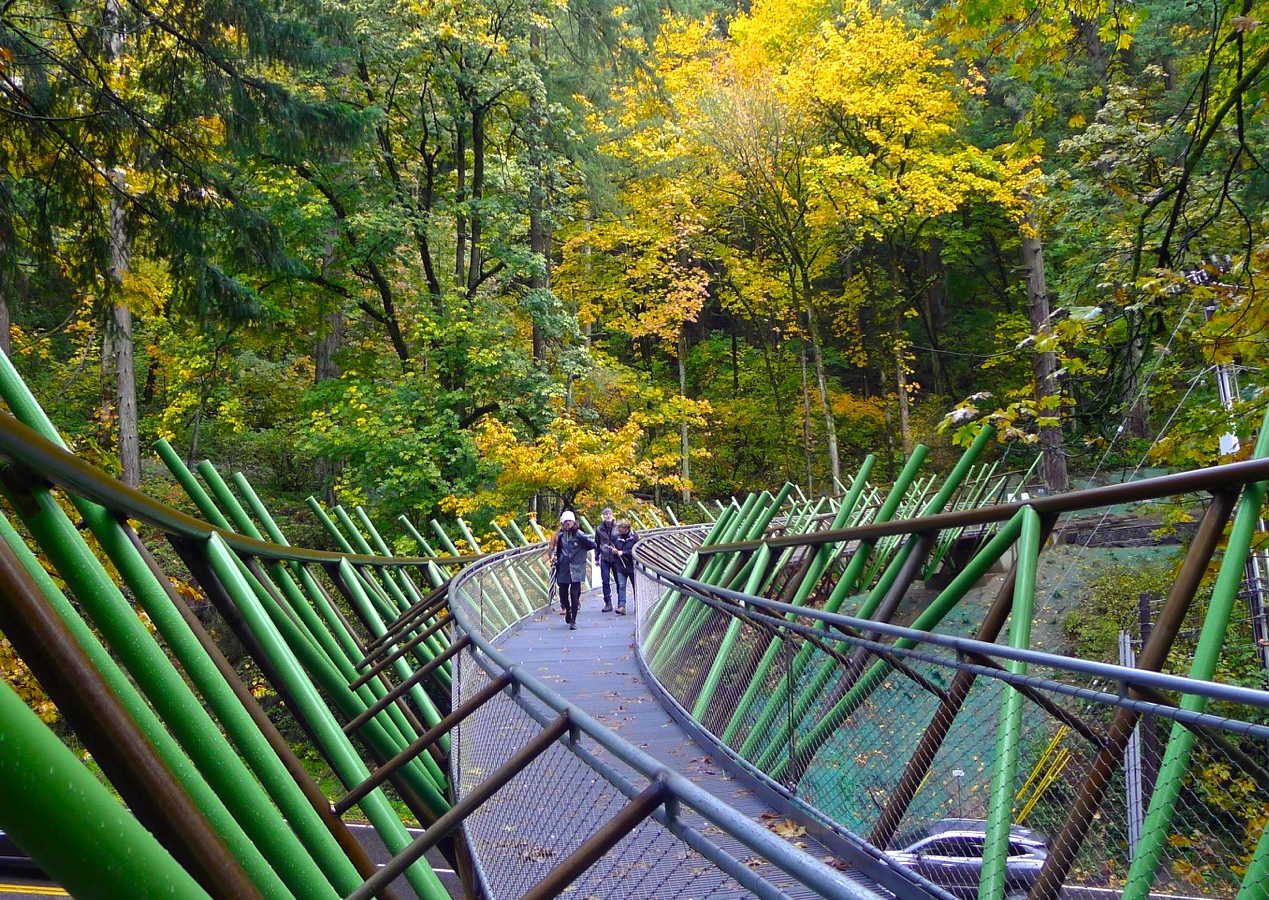 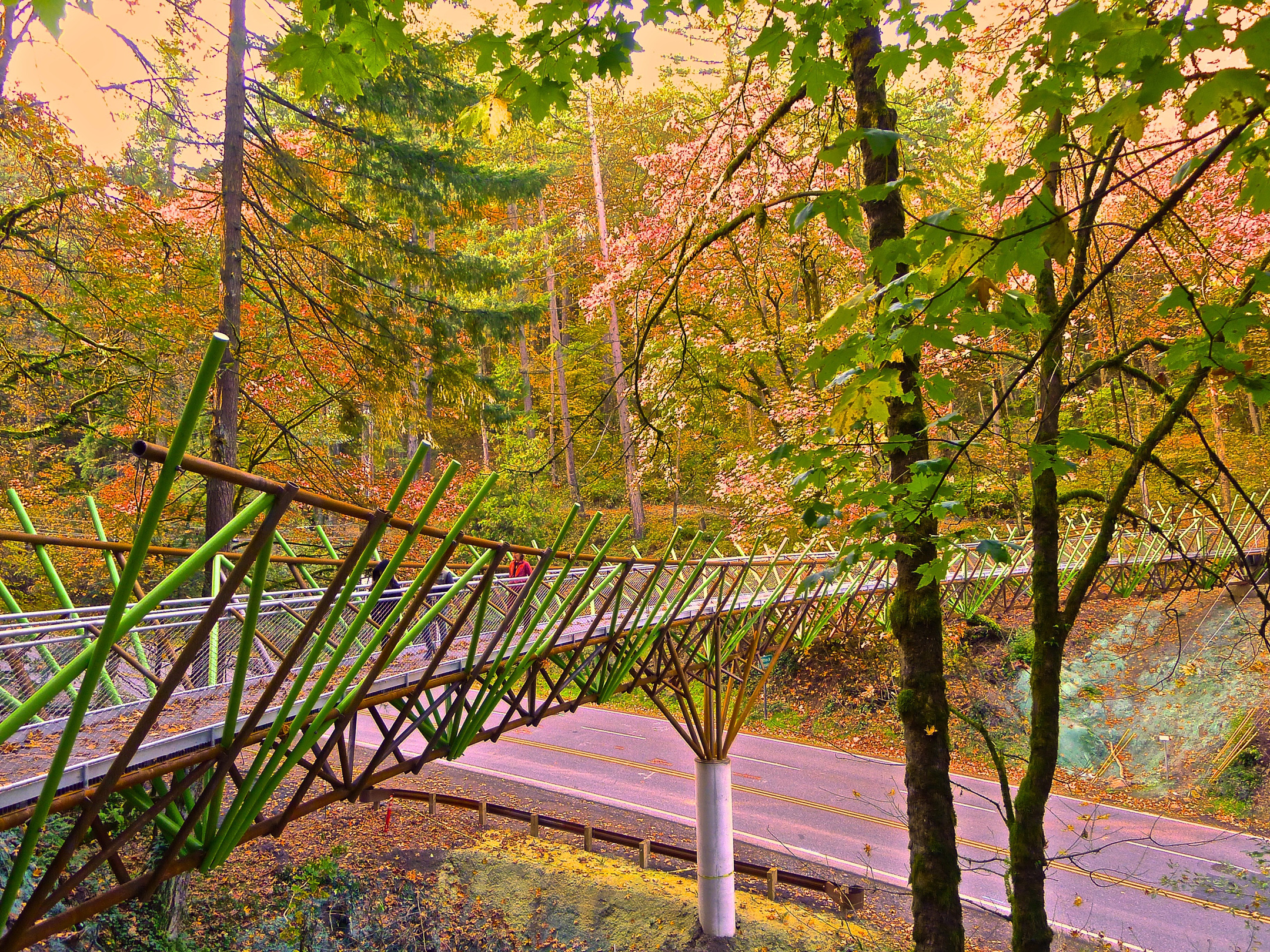 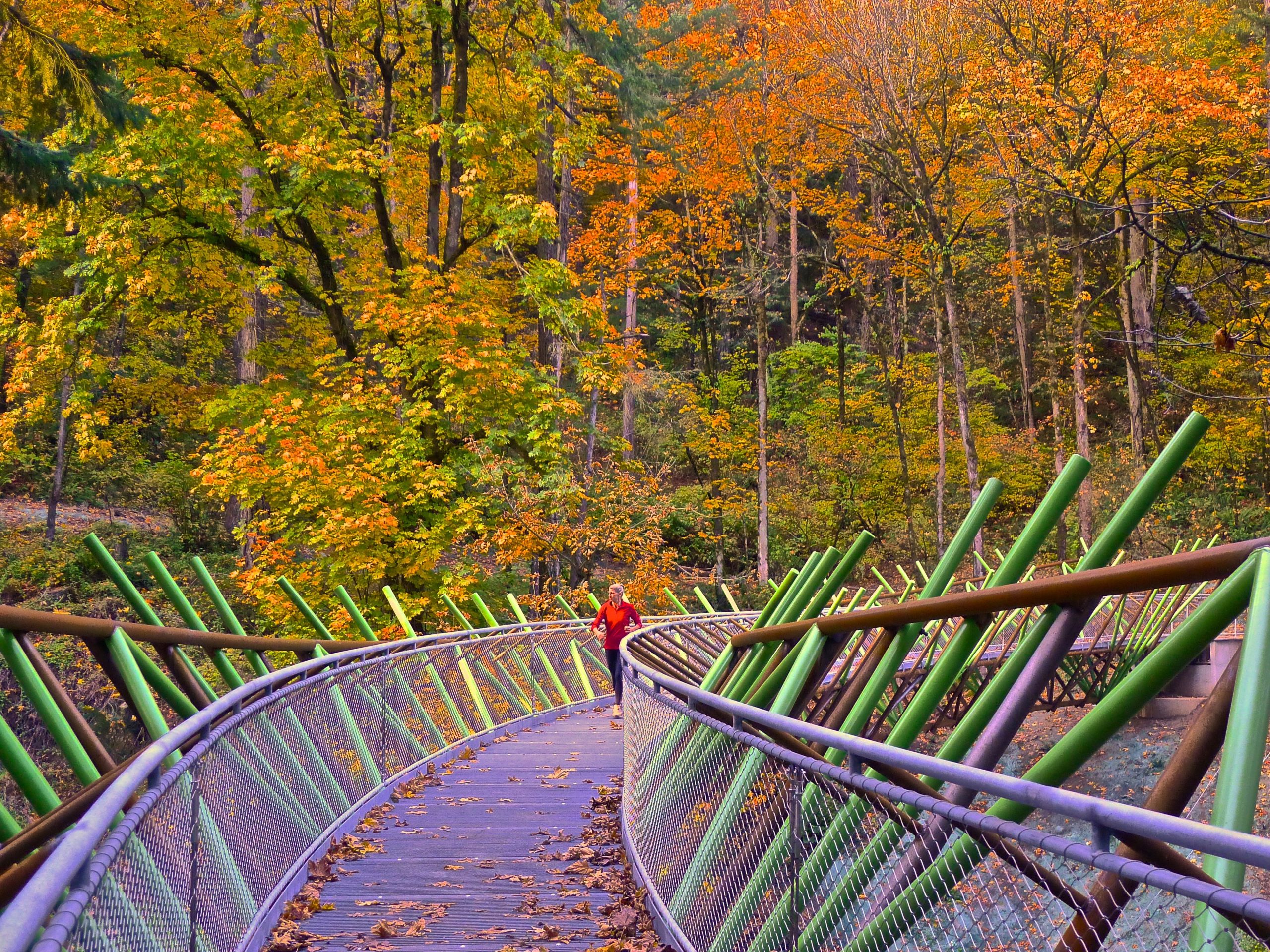 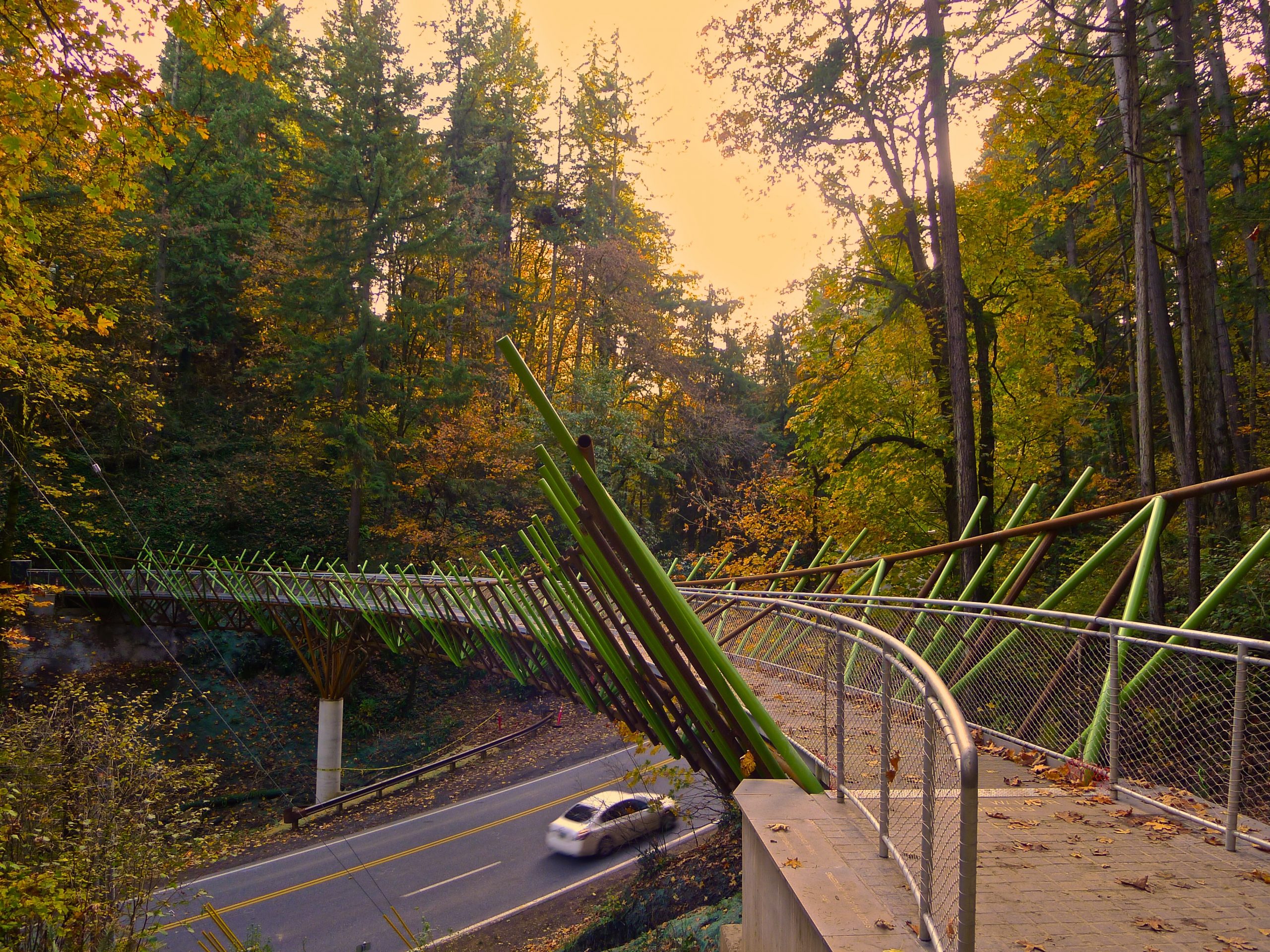 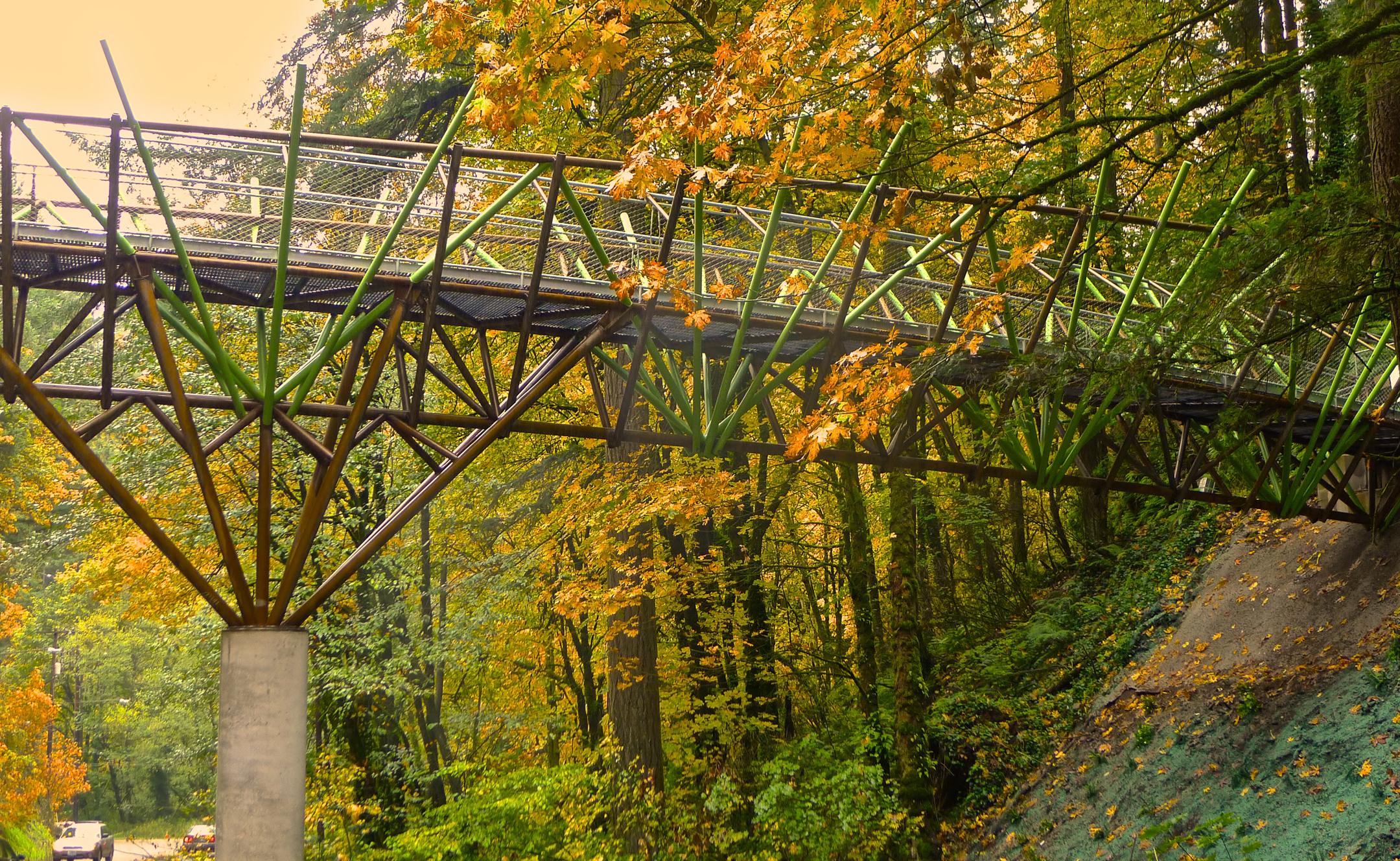 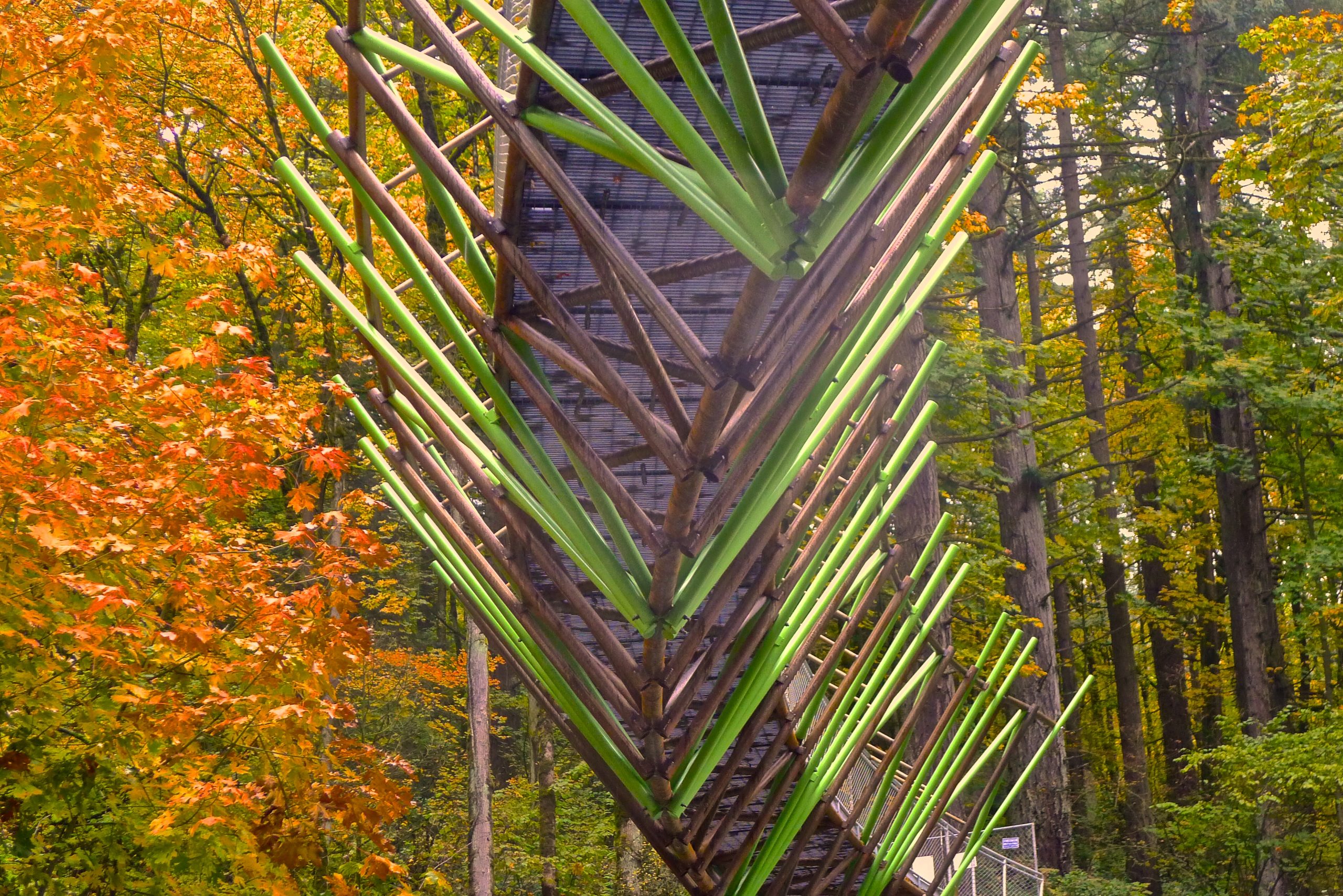 Portland’s Wildwood Trail winds 30 miles through parks along the western edge of the city, rarely crossing roads. For many years, the busiest road crossing was a major arterial, where runners and walkers had to negotiate three lanes of traffic with short sight lines. In 2011, Ed Carpenter initiated the bridge project and created the design to blend seamlessly with the experience of the trail. Carpenter was himself a 40-year trail runner and “survivor of the crossing at West Burnside”. He had already designed a number of unusually expressive bridges in addition to his monumental sculpture commissions around the world.
Carpenter’s design evokes imagery of the sword ferns and vine maples lining the entire length of the trail, while honoring the following design objectives:
• Seamless experience for walkers/runners
• Fit into forest context
• Minimally intrusive
• Transparent/delicate
• Iconic/original
• Reasonable cost
• Off-site fabrication & quick erection
• Easy to maintain

Carpenter spent three years studying different schemes, collaborating with engineers, and promoting the project on his own in meetings with more than twenty neighborhood groups, non-profits, City Commissioners, City bureaus, and Mayor Charlie Hales, before convincing Portland Parks Foundation to take on the role of sponsor. Eventually this became a project of the Portland Parks Foundation in partnership with Portland Parks & Recreation (PP&R), Portland Bureau of Transportation (PBOT), and Metro.

Ed Carpenter is an artist specializing in large-scale public installations ranging from architectural sculpture to infrastructure design. Since 1973 he has completed scores of projects for public, corporate, and ecclesiastical clients. Working internationally from his studio in Portland, Oregon, USA, Carpenter collaborates with a variety of expert consultants, sub-contractors, and studio assistants. He personally oversees every step of each commission, and installs them himself with a crew of long-time helpers, except in the case of the largest objects, such as bridges. While an interest in light has been fundamental to virtually all of Carpenter's work, he also embraces commissions that require new approaches and skills. This openness has led to increasing variety in his commissions and a wide range of sites and materials. Recent projects include interior and exterior sculptures, bridges, towers, and gateways. His use of glass in new configurations, programmed artificial lighting, and unusual tension structures have broken new ground in architectural art. He is known as an eager and open-minded collaborator as well as technical innovator.