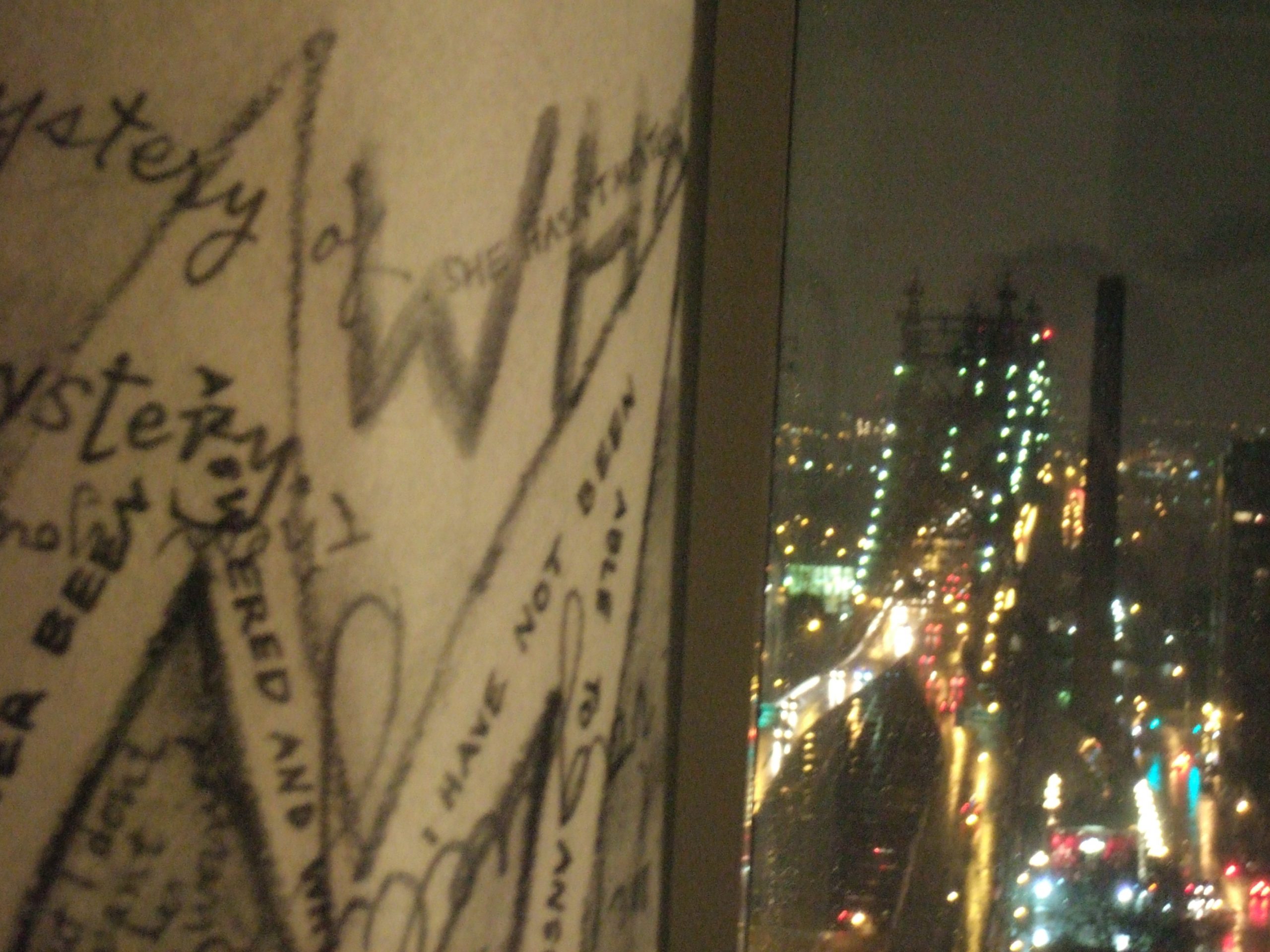 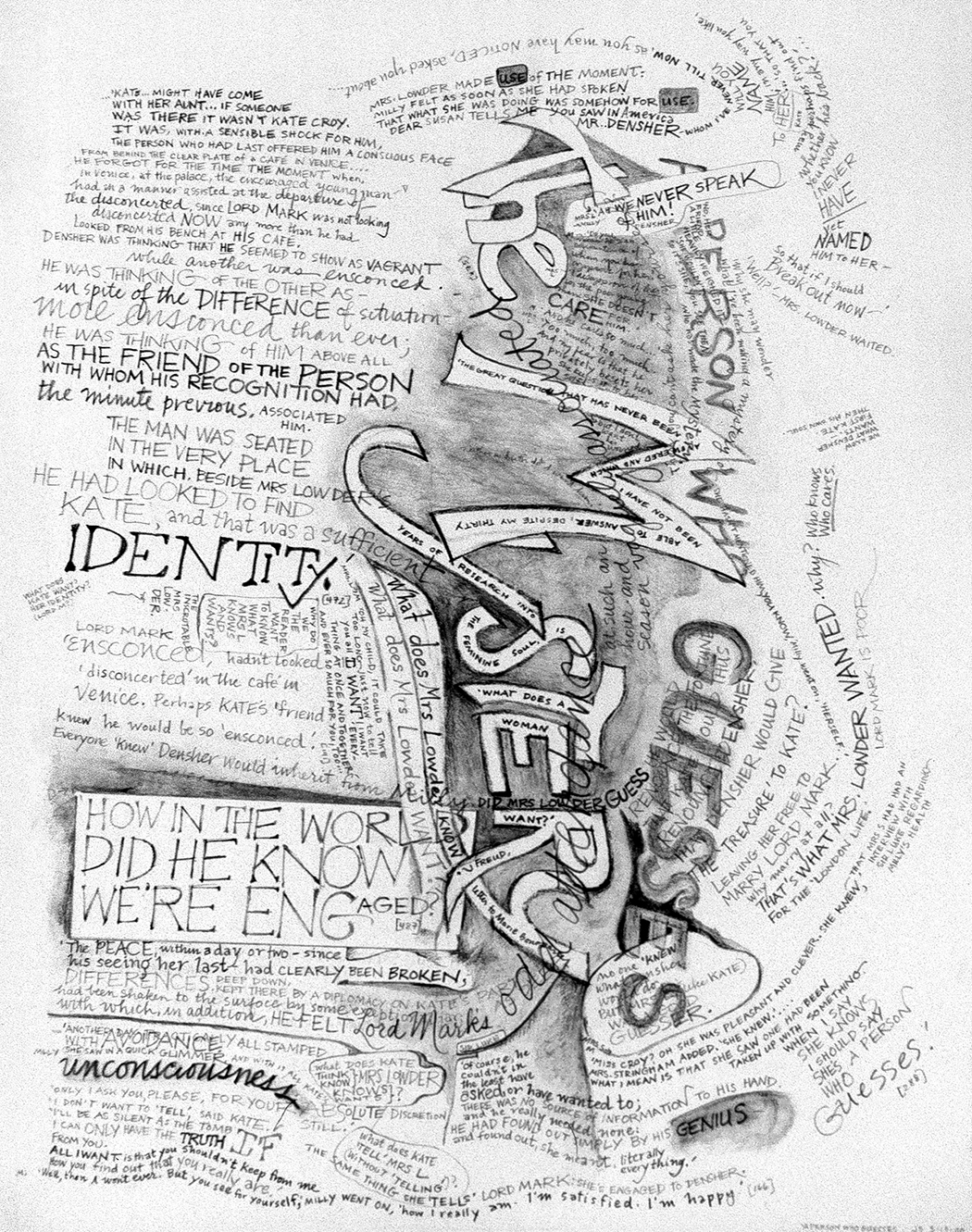 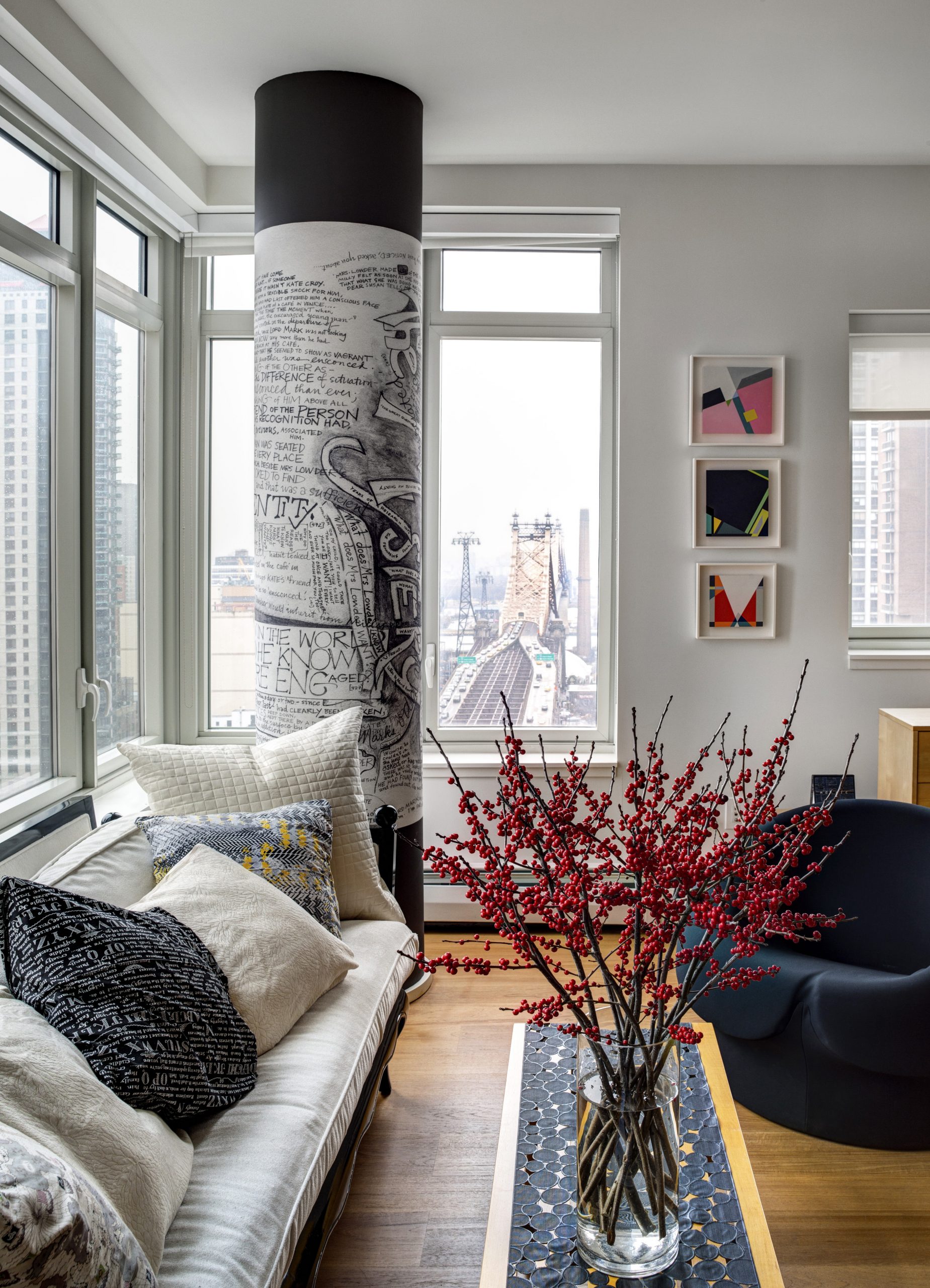 A concrete structural column in a New York City apartment covered with a pigment print on canvas. The print is approximately 50 x 36 inches. The original image is my graphite text drawing, “Person Who Guesses,” one of a series I have called “Pictures of Thinking.” It is composed of strands of text, appearing like neurons, with spaces between them, like synaptic gaps. Quotes include Sigmund Freud's “What does a Woman Want?” The viewer's interpretation crosses the gap between the lines of text, just as a neurotransmitter fires across the gap between neurons.

Allan Greenberg - my husband - commissioned me to do this site-specific work in our apartment. He was interested in the interaction of art and the architecture both in the apartment and out. He wanted to make the column appear to disappear into the vast cityscape. He was sure that one of my text drawings, adhered to the column, would accomplish his goal. Looking at the column juxtaposed to the Queensboro Bridge - whether in the daylight, or flickering night - is a stunning experience. The size and shape of the letters and words appear perfectly scaled to the distant view. Allan took advantage of a deep connection between"text" and "architecture" - these two words have a common Indo-European root, TEKS - to fabricate, make, to weave. The text, at that particular scale, looks like the city streets and buildings far below the 20th floor. Allan also liked the interaction of the large hand-written words with my geometric abstract paintings.

Allan and I chose the particular drawing based on the strong verticality of the word "Mystery." I had been making pigment prints with David Adamson at Adamson Editions, Washington, DC, since 2000. David found the right canvas for printing this project. He was able to capture the special quality of the original graphite in the image - not easy to do. The original drawing was about 14x10 inches, the print, about 50x35 inches, yet retained very high resolution. David sent the print rolled in a tube to the apartment, where Thomas Noble and two others from Allan's office, Allan Greenberg Architect, adhered the print to the column, and then sprayed a fixative on the surface. Very kind of them to leave their drawing boards for this! Allan had the spaces above and below the print painted a medium gray, but then repainted them black - the writing needed a stronger contrast - and the black too, helped create the illusion of a floating column.

The column is indeed a conversation piece. Here is a link to an article about the apartment, Allan and me in the New York Times, December 19, 2013. http://www.nytimes.com/2013/12/19/greathomesanddestinations/the-closet-modernist.html?_r=0