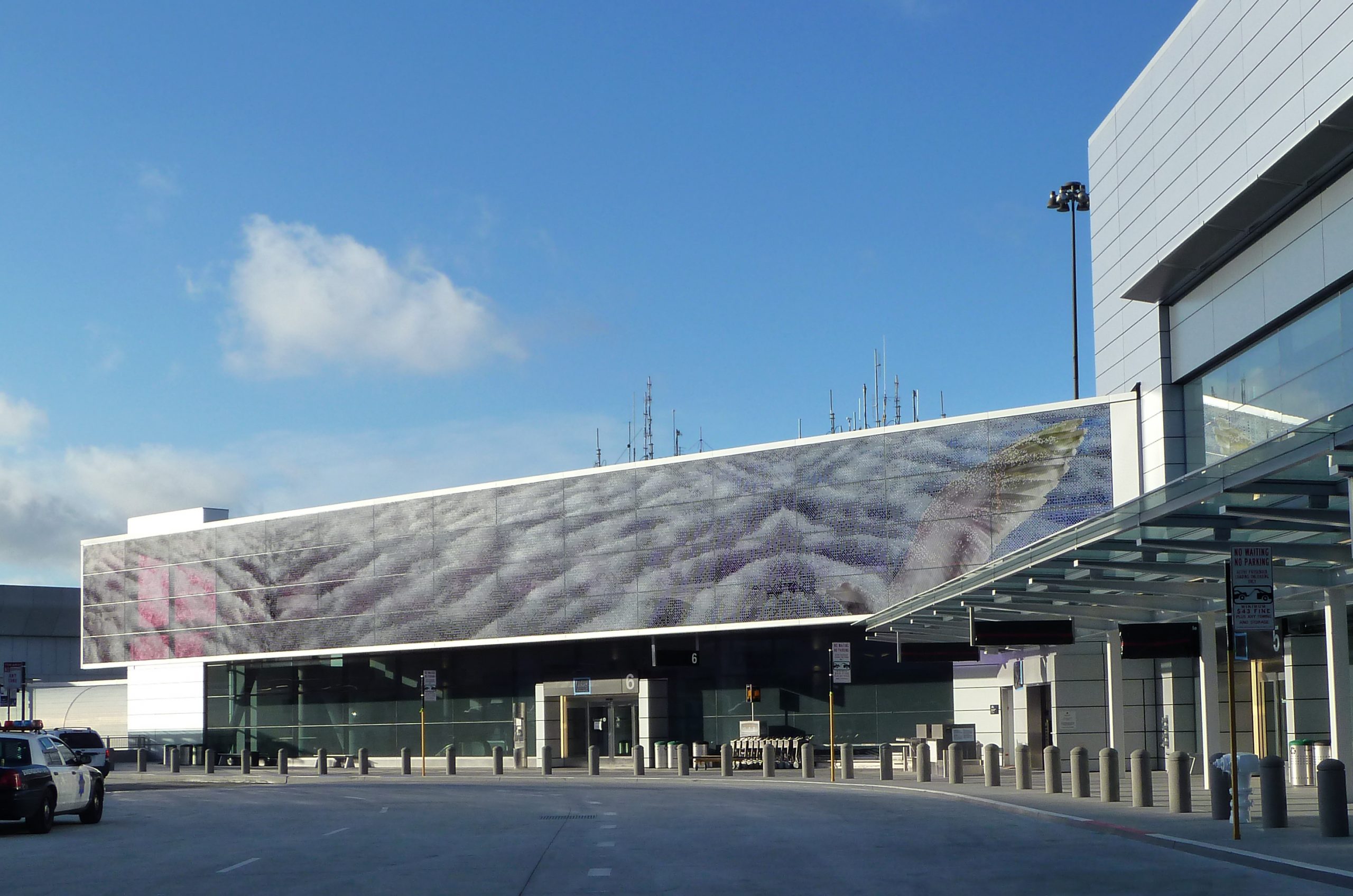 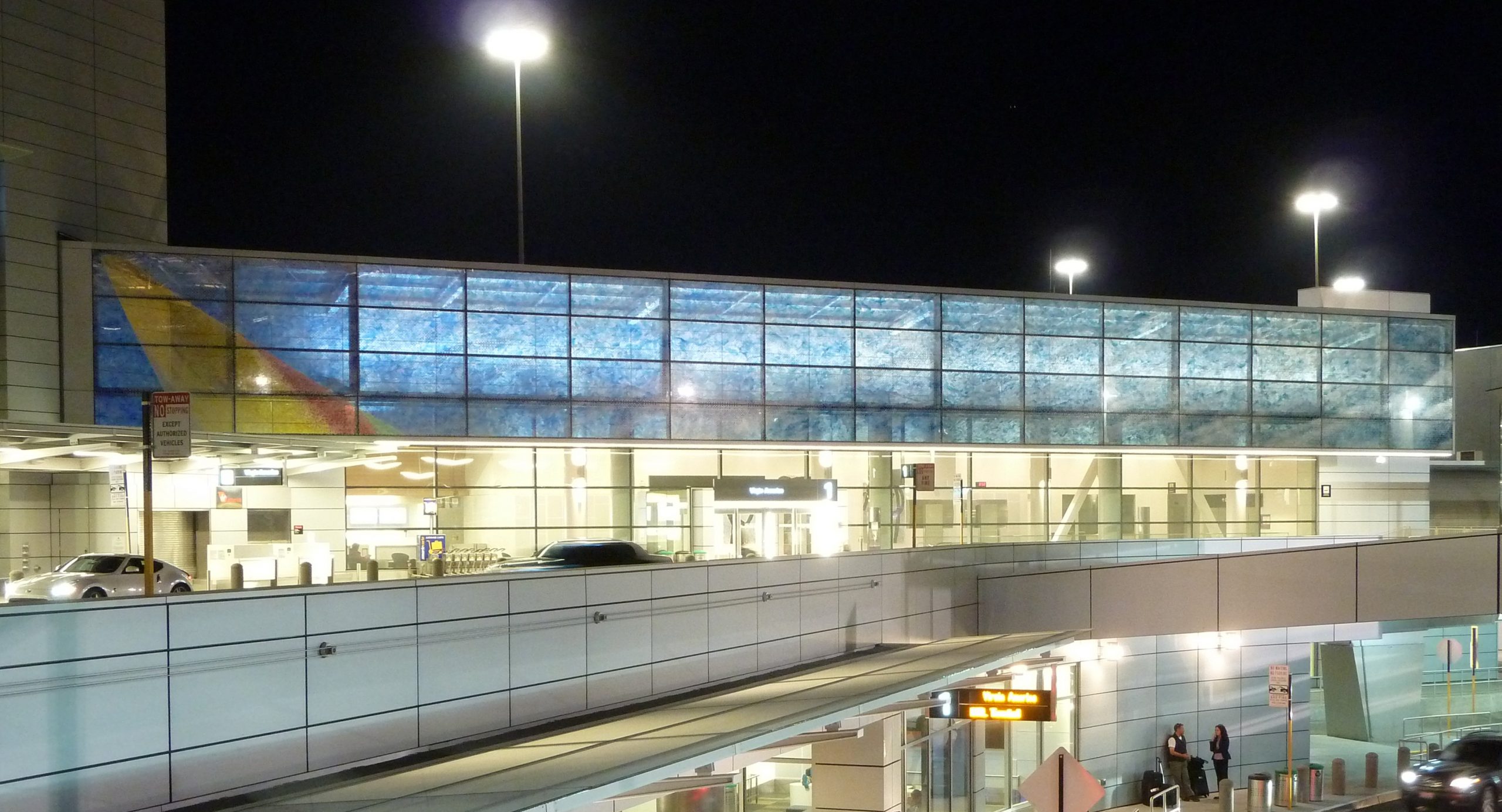 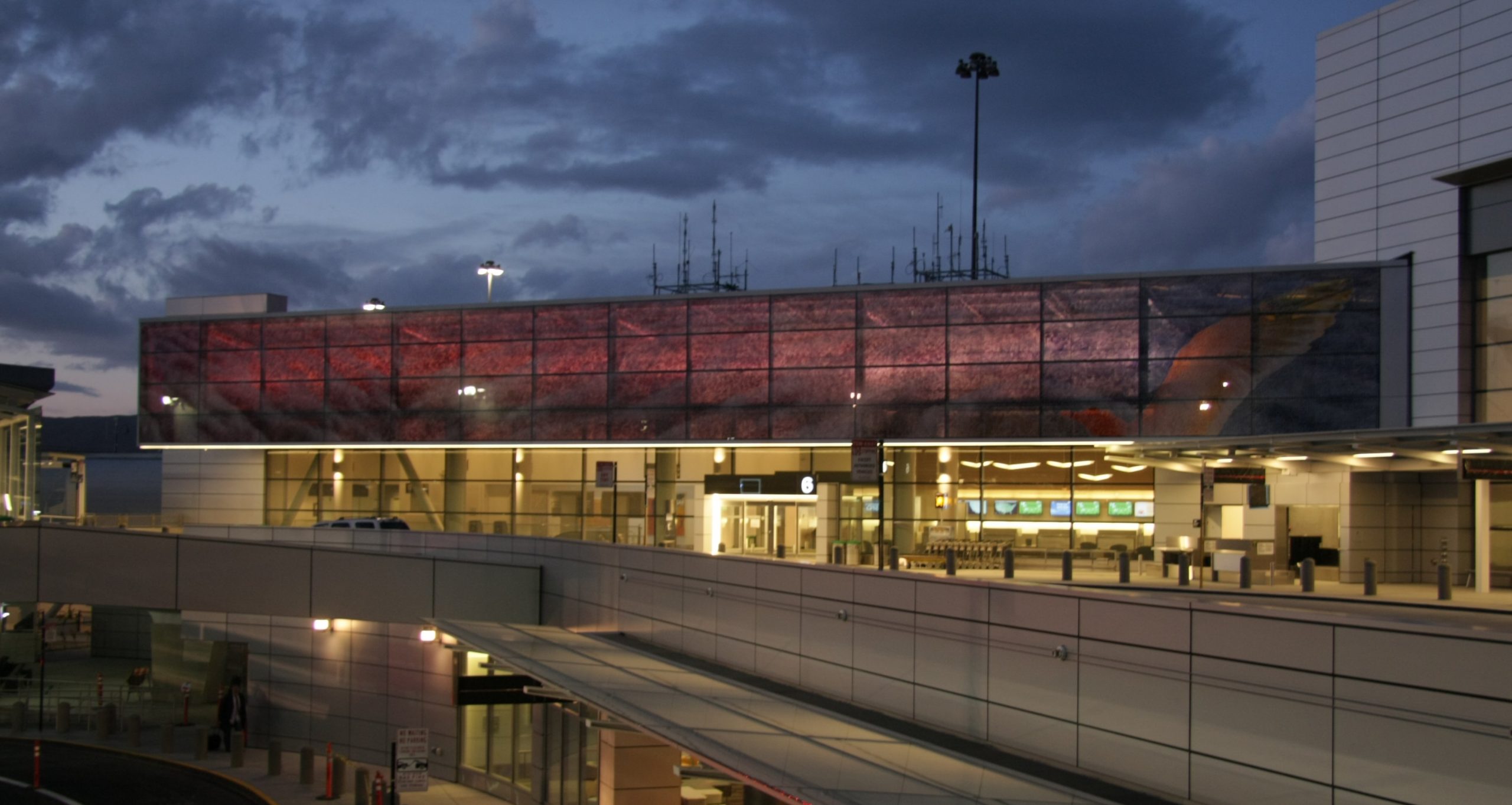 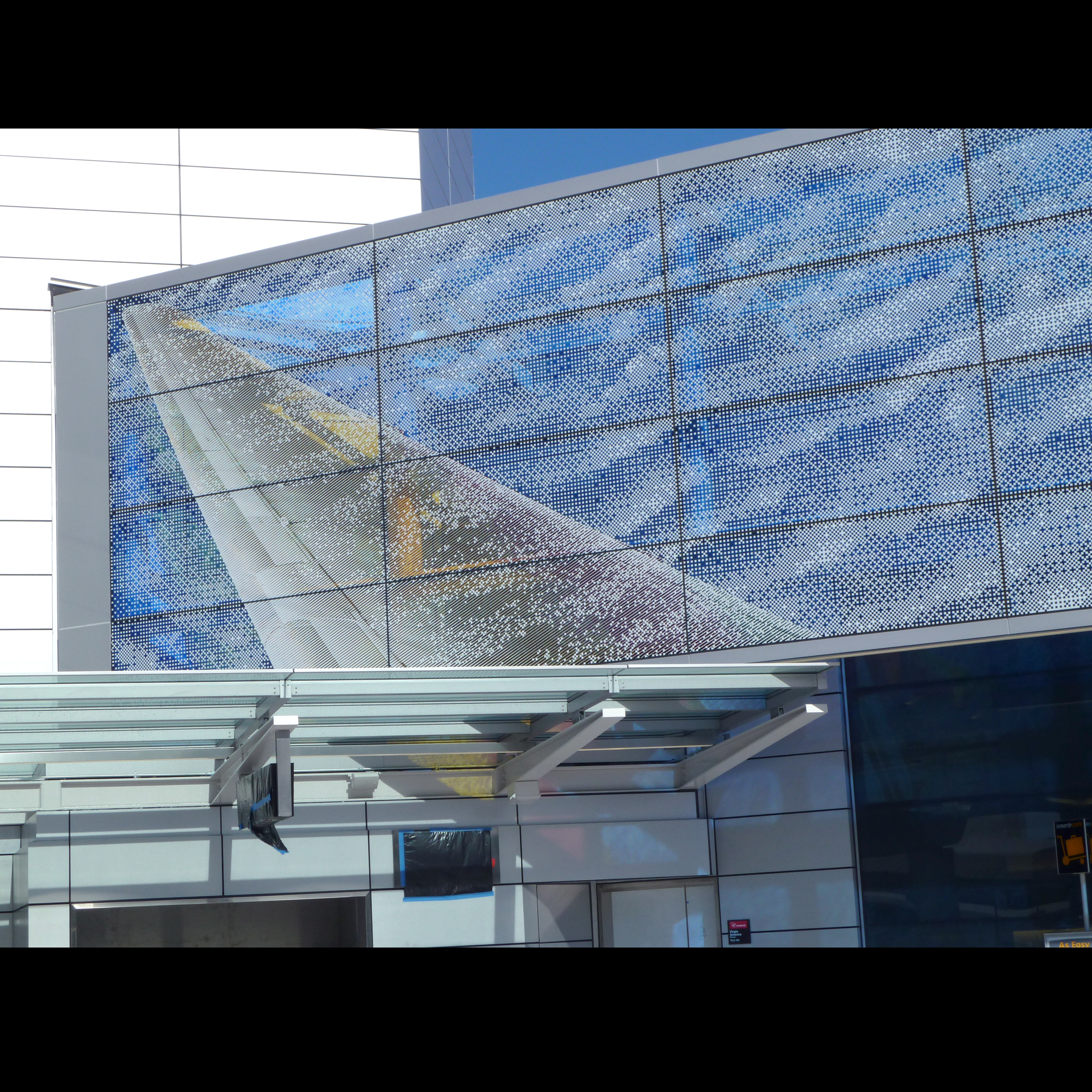 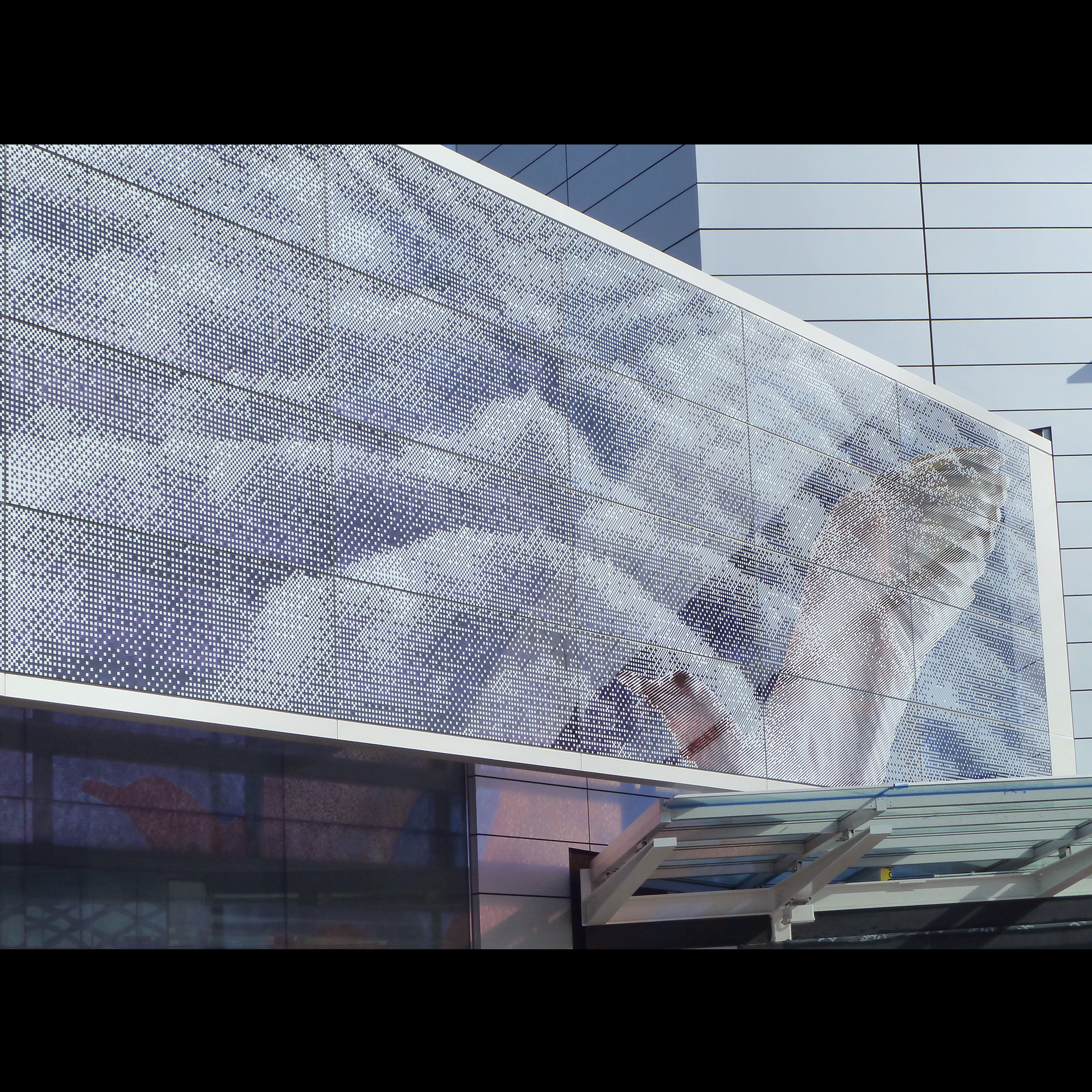 Inspired by our relationship to clouds and flight, the imagery for this vertical glass canopy creates a façade for the Terminal. The images delve into flight’s inherent dualities: ephemeral-permanent, shallow-deep, hard-soft, abstract-real, distinct-indistinct, natural-man-made, symmetry-asymmetry, up-down and constant-change. The façade is comprised of a grid of 120 pieces of laminated glass panels 4’ x 10’ each covering two 16’ x 150’ areas. Produced at Franz Mayer Studios in Munich, Germany, the panels are comprised of one layer of glass hand-painted with glass enamels and another layer that is a silkscreened pixelated image in white.

The unusual vertical canopy on the exterior of the Terminal 2 for San Francisco International Airport was designated as a prime artwork opportunity for this renovation of an existing terminal for the airport. As in all of the projects of the San Francisco Arts Commission, integration is a primary goal whenever possible, with the artist brought into the process as early as possible. Though the vertical canopy was always a designated part of the redesign of the terminal, it was enhanced by the artworks dramatic color and image.

The design and fabrication of the artwork was a collaboration between the fabricator, Franz Mayer of Munich and the artist, with input from the architects, Gensler. The artist also included the glass installers, AGA of Oakland, and Turner Construction company in the process as technical and structural needs also needed to be considered so the artwork could be installed properly and so that it met the codes. The artist visited the Franz Mayer studio several times to develop the exact technique and coloration for the hand painting, the pixel size of the silkscreened pixilated image and worked closely with the studio to refine the project into its final form. Every aspect was tested and considered, from viewing distances to lighting conditions, though as always, upon installation at the site there were some delightful and interesting aspects to the project that emerged.