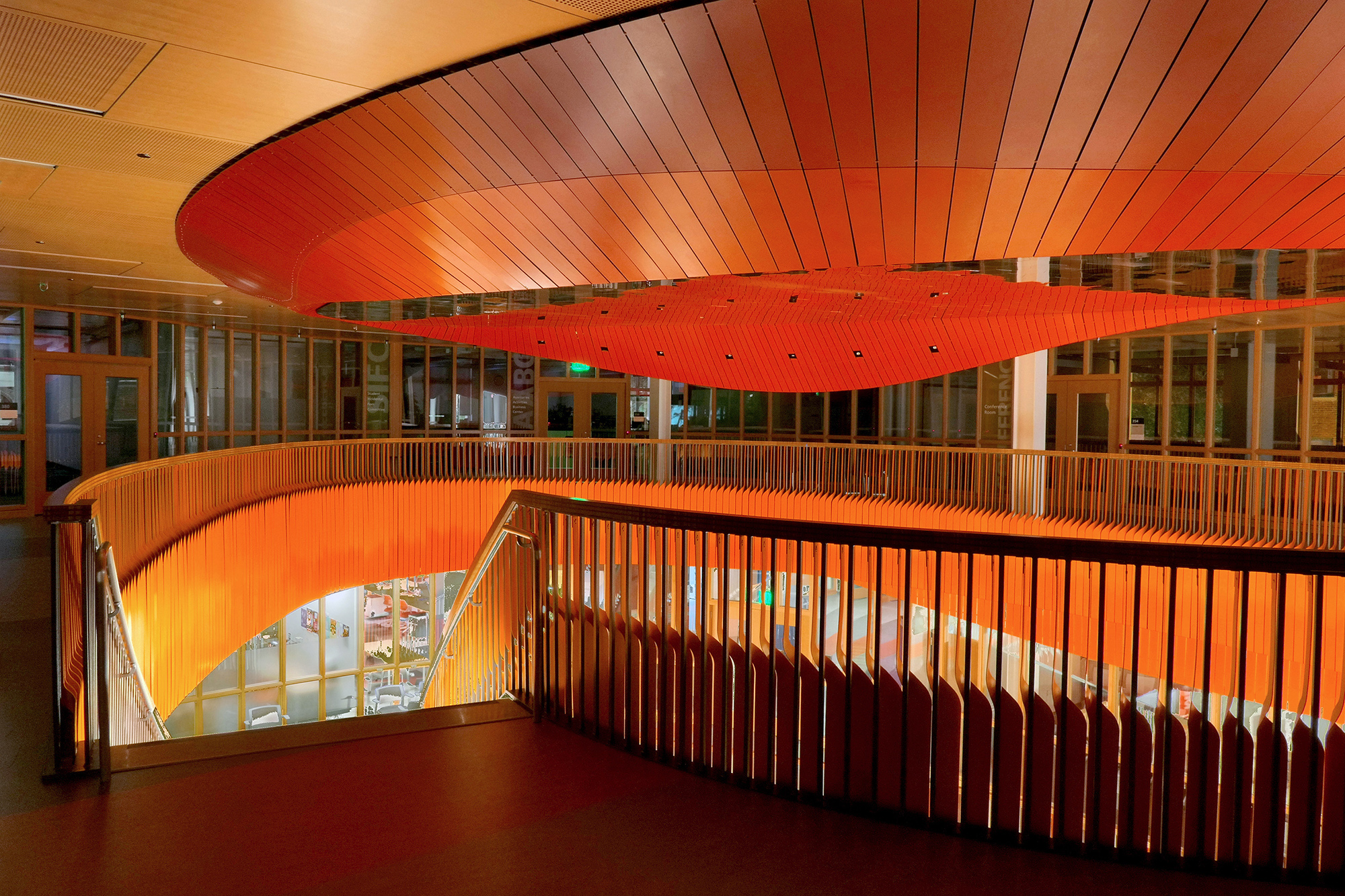 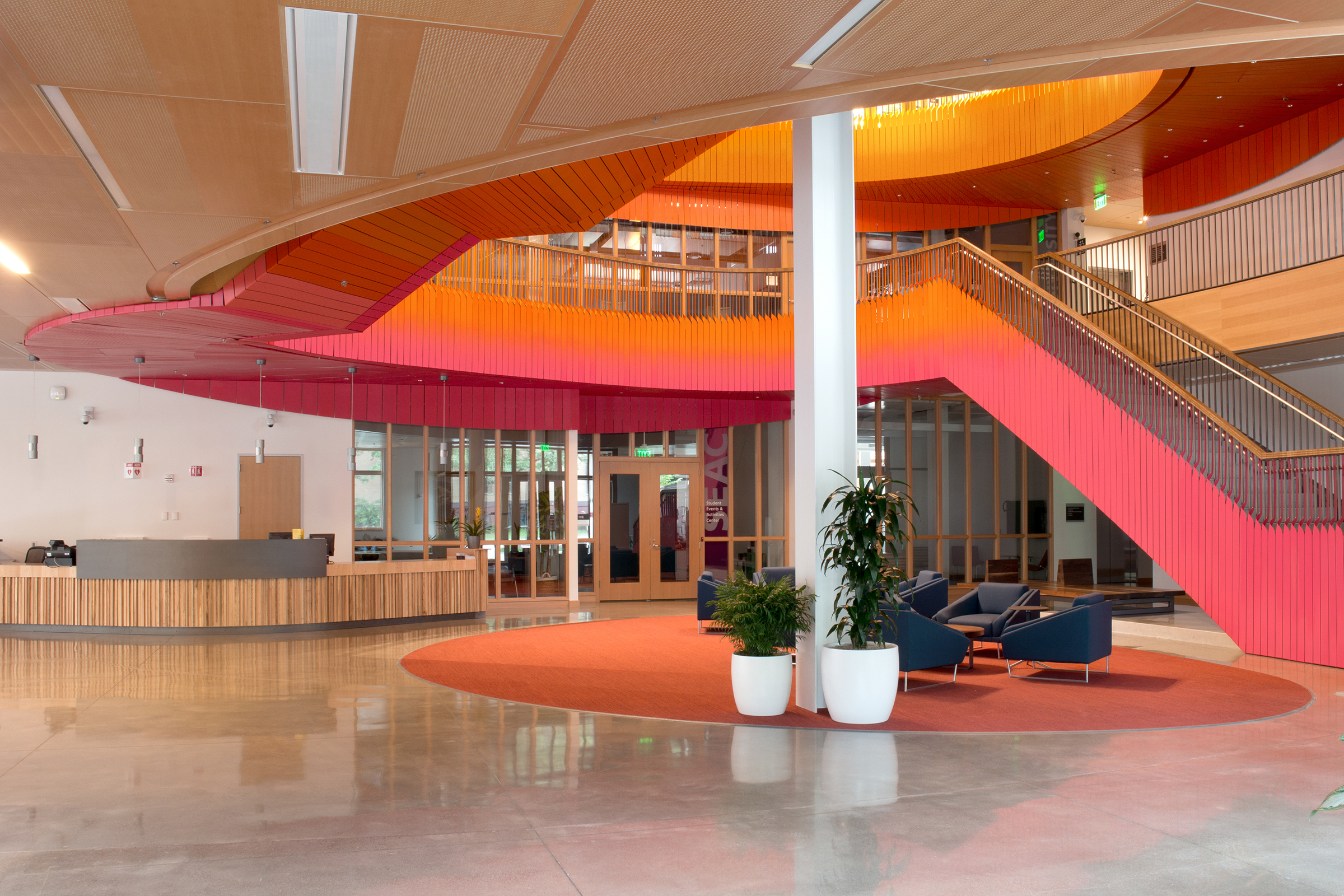 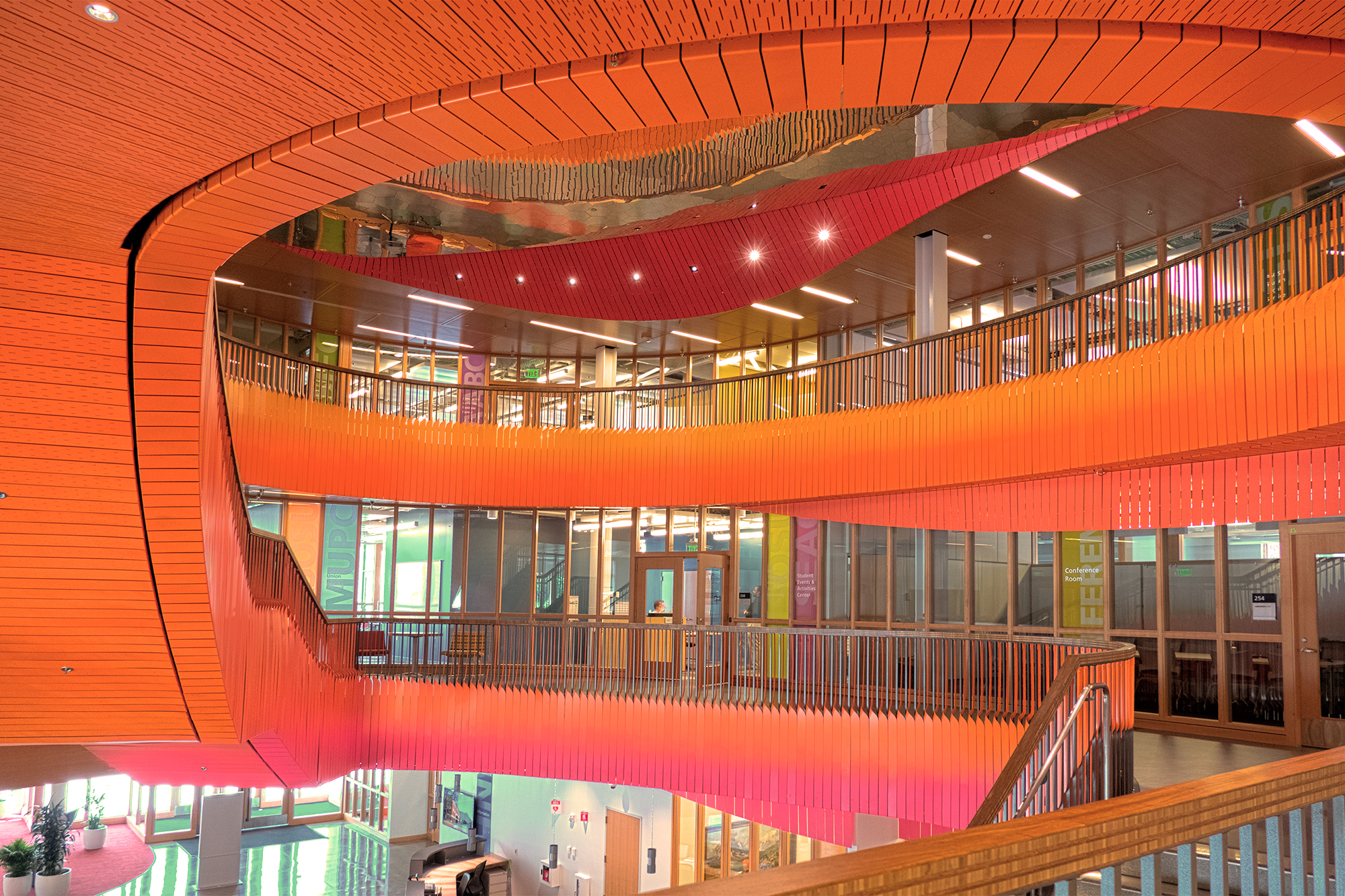 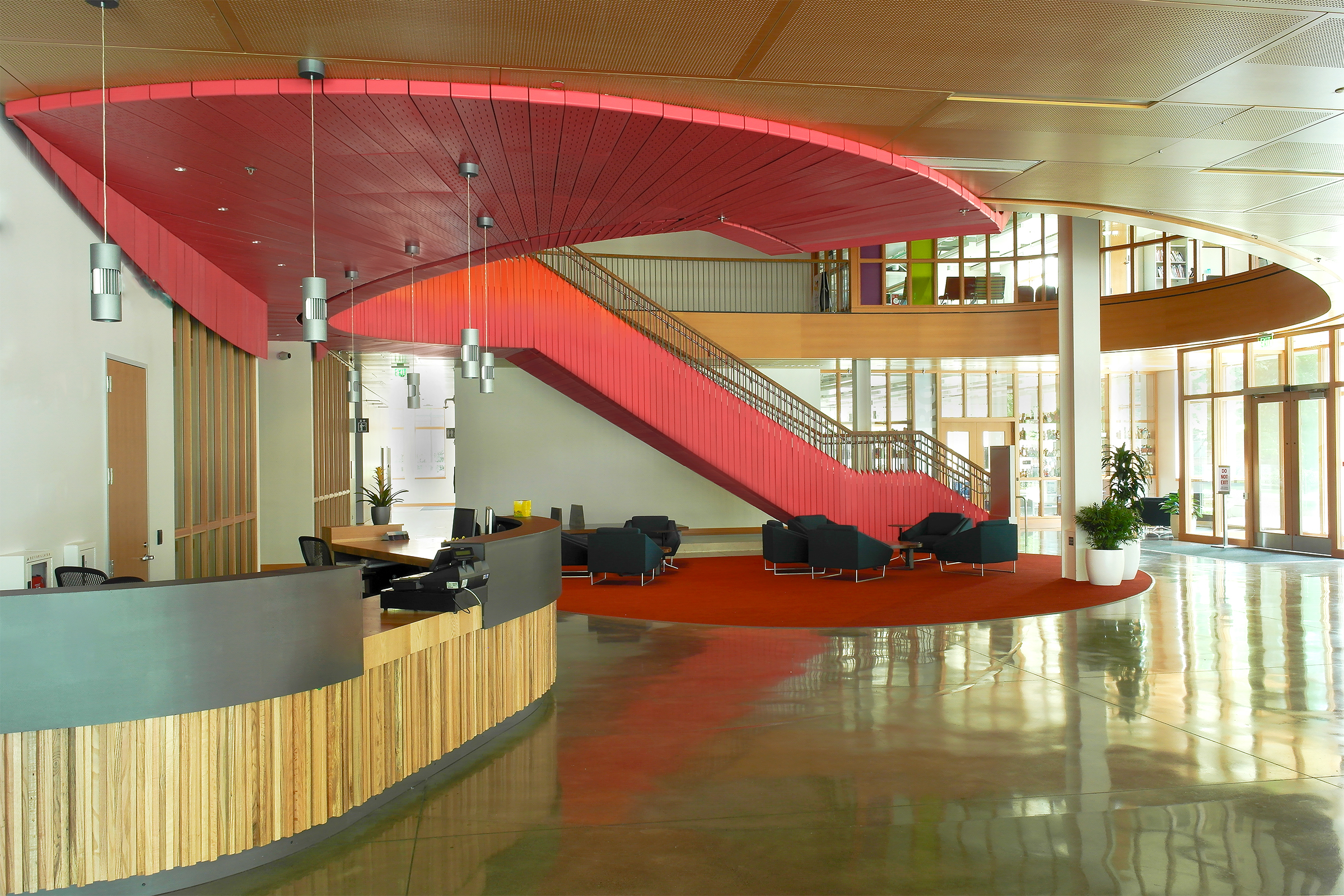 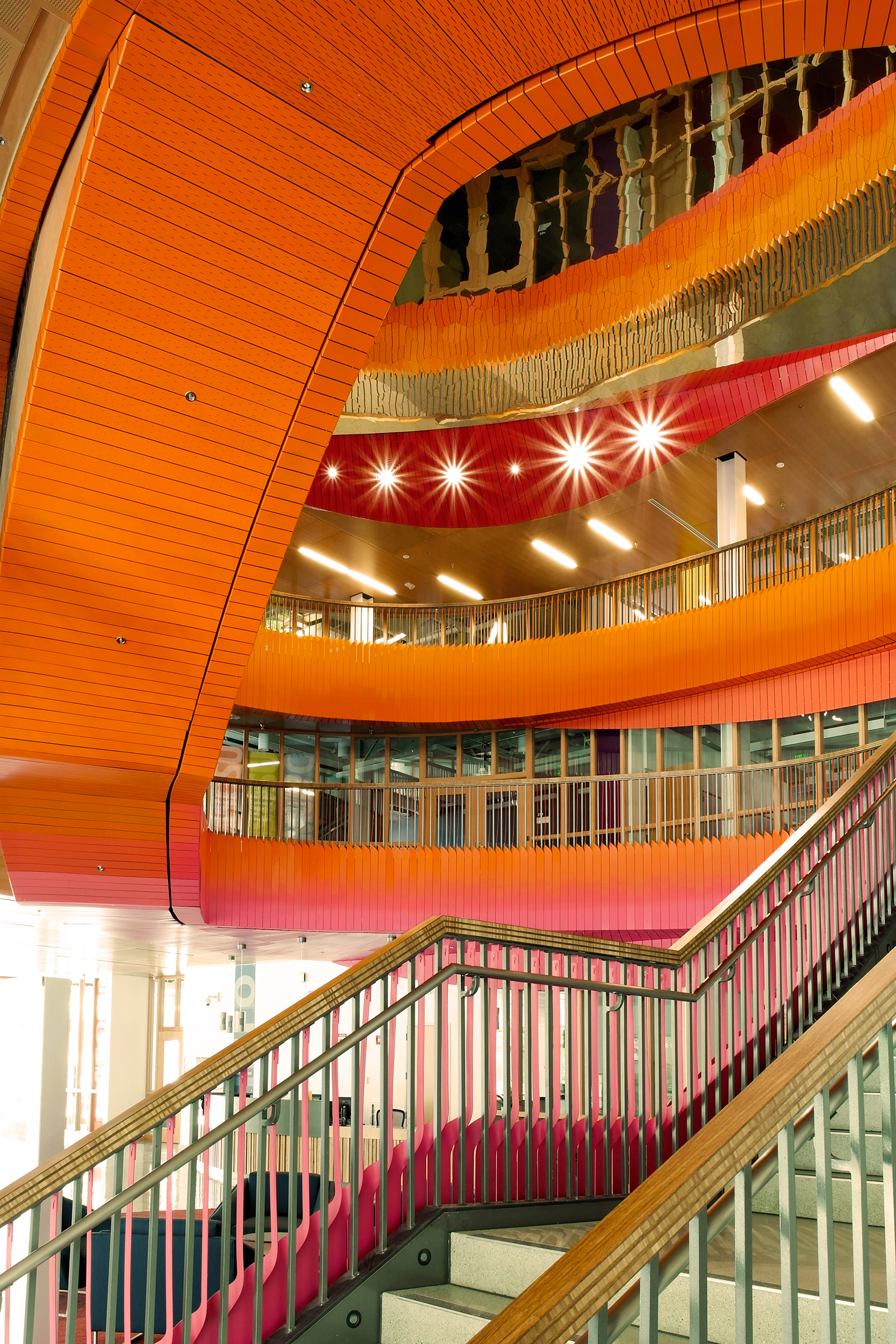 Afterglow is an intervention in a three-storey lobby space of the Student Experience Center. It consists of two primary parts: a central ceiling piece composed of an inverted ridge line figure surrounding an ovoid plane of mirrored tiles and a continuous surface that wraps the stair baluster and extends to the first and second level ceilings. It is composed of just under 2000 powder-coated strips of custom fabricated aluminum.

Lobbies are understood as transitional spaces. In this case the goal was to reinforce the vertical void of the lobby by making people look up and across while passing through and temporarily getting caught within the vortex-like space. The proposal injects a vibrantly colored set of surfaces that produce an atmospheric effect similar to Afterglows. Afterglows are the optical phenomena associated with the scattering of light particles during sunset that produces a range of warm rosy hues in the sky. The surfaces are developed into radiating strips of powder-coated aluminum and are developed according to building performance criteria. The integration of the art with the building was crucial as it replaces the architectural ceiling originally designed, demanding that the art performs mechanically and meets code requirements.The ceiling strips integrate lighting, hvac, & fire protection. A perforation pattern allows the ceiling to perform as a smoke draft plenum with denser areas allowing chill beams to blast through. A 3” gap near the inner edge of the triple height space acts as a water curtain. The vertical strips along the inner area mediate between floor diaphragm and guard rail, rendering them continuous through conic twisting.

The project was installed while the building was still under construction. This meant producing a set of drawings that coordinated the art with the building and the mechanical elements being interfaced with. Four months were spent working with the architect, the contractor, and subcontractors to coordinate all construction issues, logistics, and scheduling.The fabrication process was a collaboration between my team and outsourced professionals. CNC technology was used to laser cut and bend the aluminum strips with various radii. This involved coordinating with the metal fabricator and codifying the pieces accordingly. The color is produced through powder-coating and we introduced a gradient transition along the stair fascia. This involved coordination with the powder-coater and developing a way to communicate where the color transitions occur for each piece. Since powder-coating uses an electrical charge to bond the colored powder to the metal, it is much more difficult to fade the color consistently. We developed a strategy with the powder-coater to randomize the coating order of the pieces so that the inconsistencies would be distributed evenly across the entire surface.

The project was designed with advanced digital tools and custom scripting techniques that produced a pipeline between initial design to fabrication. The technology allowed us to achieve a high degree of sophistication with control and adjustments to various tolerances in the field.