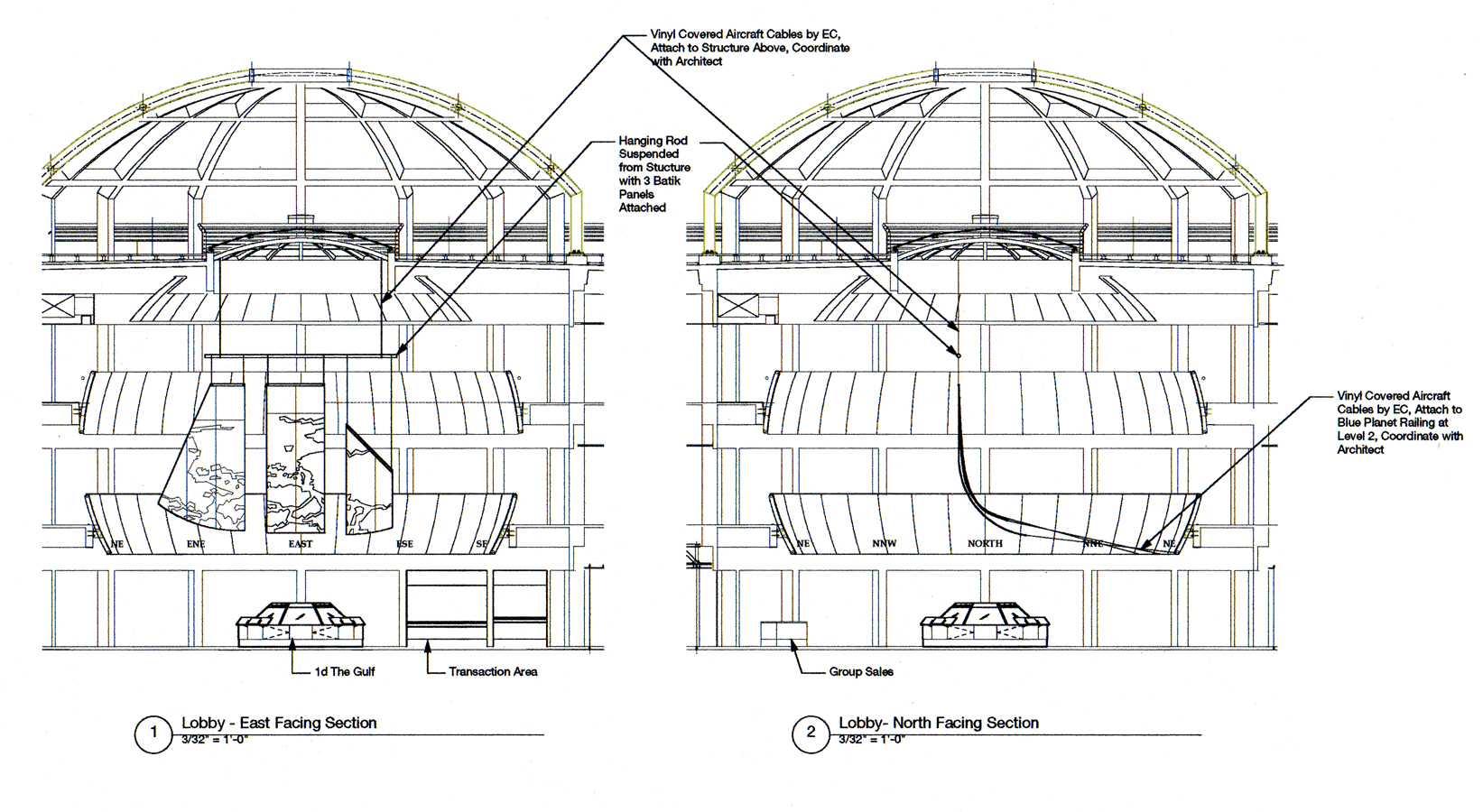 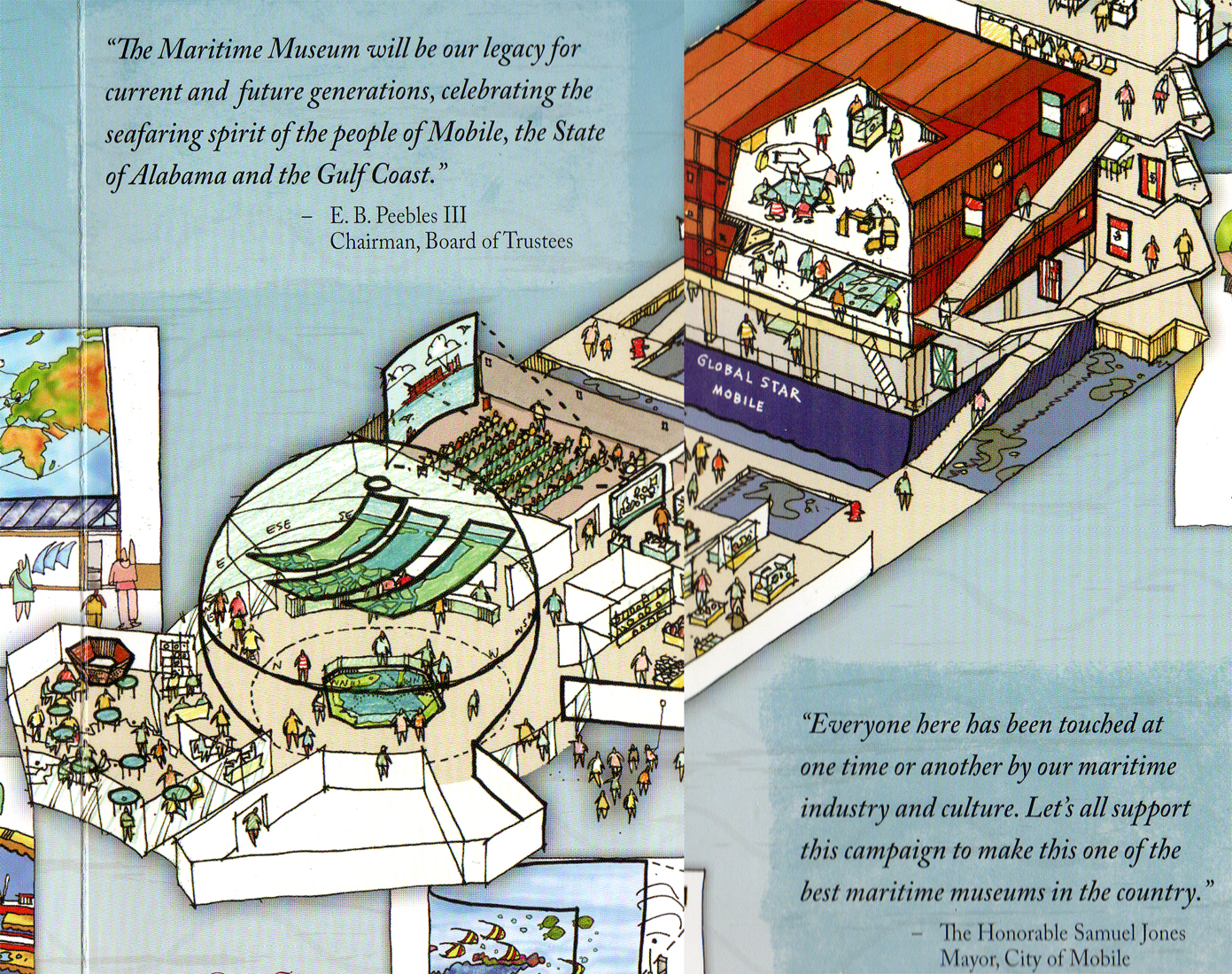 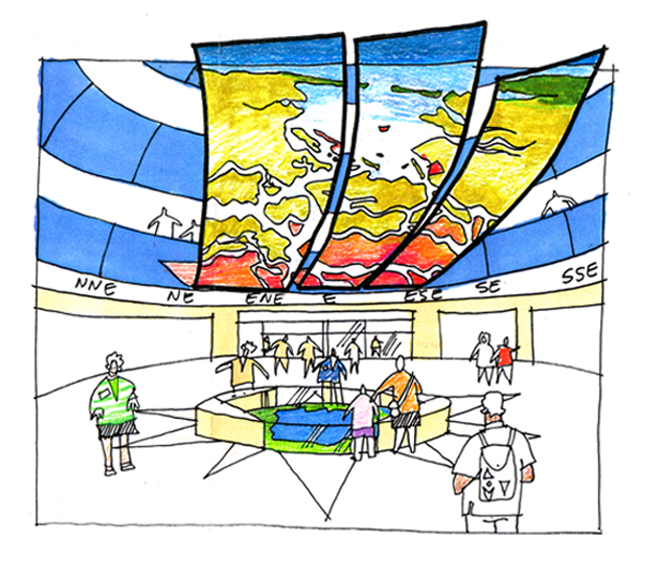 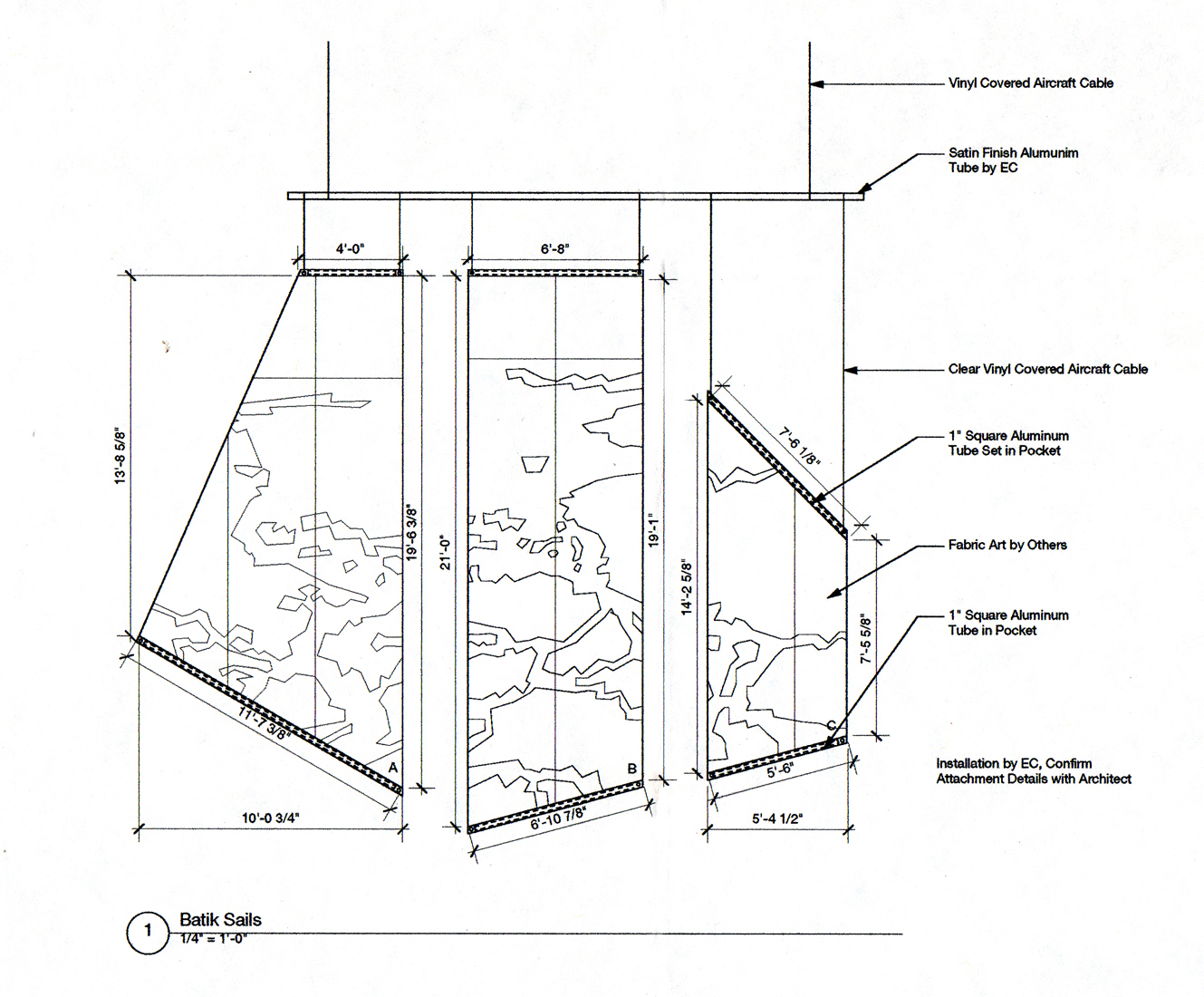 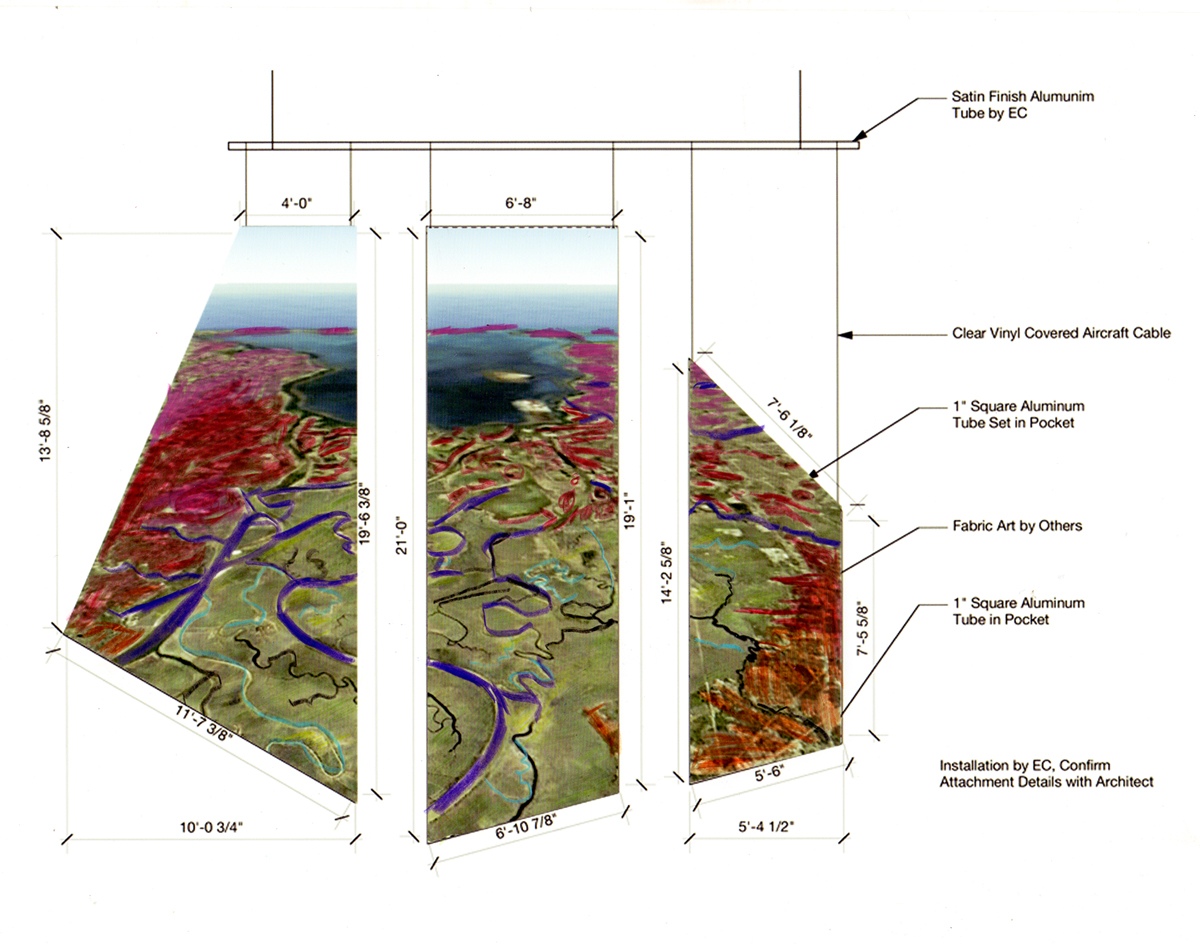 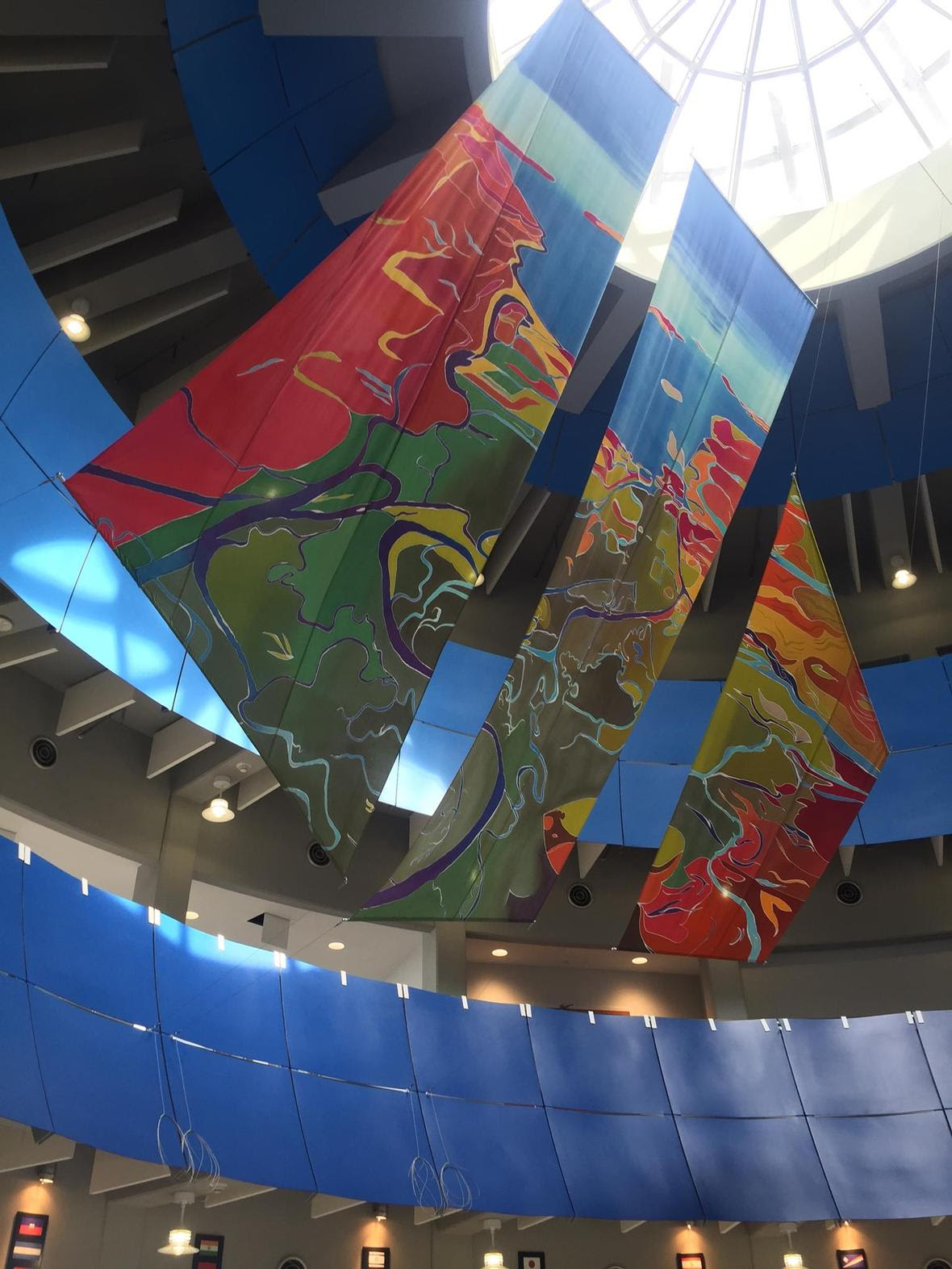 Client: GulfQuest, the National Maritime Museum of the Gulf of Mexico

Above Mobile Bay is a silk sculpture shaped like 3 ships’ sails, the longest 21 feet with a total width of 30 feet, welcoming visitors to the National Maritime Museum of the Gulf of Mexico. The aerial landscape shows the vast, protected bay of Mobile, depicted with geographic accuracy, providing a context for viewing the museum exhibits. The silk batiks were dyed to match the color of container ships, interior paint, floor mosaic, and logo of GulfQuest, the buyer, but expanded the palette. The sails were sewn into triangular and trapezoidal shapes to specifications provided by the architect.

With its rich seafaring culture and central location on the Gulf Coast, the city of Mobile, Alabama opens its new maritime museum in late 2014, the first of its type in this region, to visitors and residents alike. The goal of this commission is to reveal the bays, rivers, marshlands, deltas, islands and peninsulas surrounding the museum, offering a unique sense of place. Positioned above the ticket counter, the iconic map is the focal point upon entering the ground floor rotunda. The graphic contours of Fraser's modern batik art momentously fill the commanding space. The architectural structure of the 3-story building is softened by these vibrant silks which also absorb sound.

Housed inside a 90,000 sq. ft. building shaped like a large cargo vessel, the first impression will be the large-scale batiks floating in the atrium. The silks will move subtly with air currents, draped in an arc shape to give the sense of a 3-masted sailing ship of long ago. The art references maritime history and is a contemporary map of the bay.

The installation will be the last event before the opening.

Frank Zaremba, the architect heading this venture, contacted Mary Edna Fraser in 2011, early in the designing phase, knowing she could meet the needs of the client within budget and on time. Frank envisioned the Mobile Bay sails and sent a drawing to Mary Edna. A telephone call established square footage and costs. An installation team was consulted and the outrigging of aluminum poles and airplane wire was established to make the sculpture appear to float from the ceiling. Mary Edna first traveled to the architect’s firm in Boston to immerse herself in the project asking questions and studying plans of the building. Her trip to Mobile included an ultra light aircraft excursion all around the site with her cameras in hand.

The first design was rejected and after the second conception with a more expansive view, the client agreed on the heavyweight silk, colors and design, signing a contract. Frank came to Mary Edna’s studio in Charleston after the first sail had been completed, happy to see the brightly colored silks made to blueprints provided. Working with architects, planners, designers and builders takes a lot of energy but the process makes for good art.

This was the first triangular work for the artist and the first time she seamed drapes vertically. Each corner has different angles. Exacting measurements were required to draw, cut and sew the seven 44-inch wide panels, which became the 3 sails. Accounting for shrinkage in the final art required Fraser's expertise with textiles. Panels were pinned together, drawn, then separated for the batik process, before sewing the final art. Keeping the hems non-wavering required sturdy French seams. Mary Edna's studio could only fit one sail at a time, so matching colors over a year of work added additional complexity.