A’Salam Aleykum : Peace Be Upon You - CODAworx 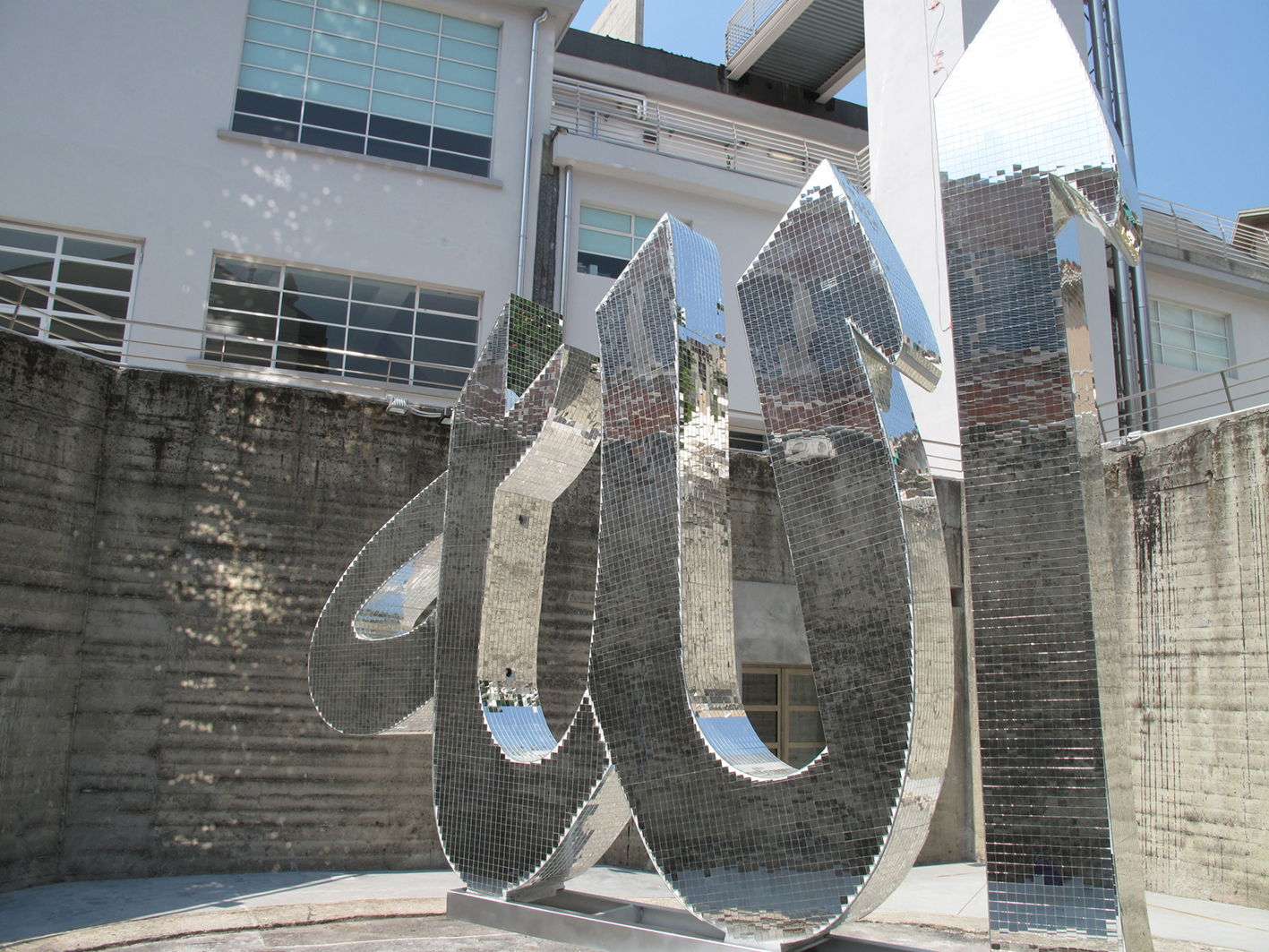 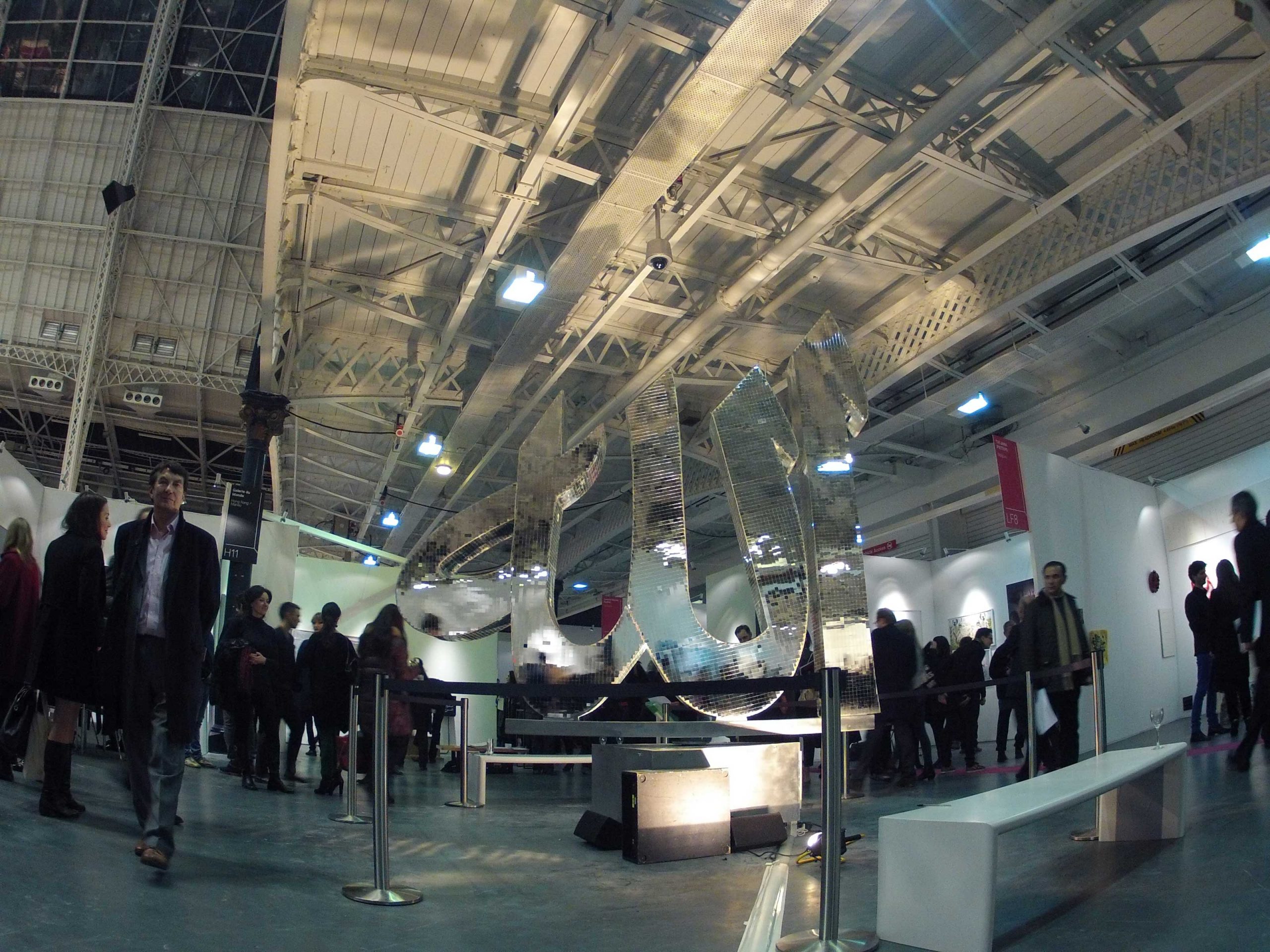 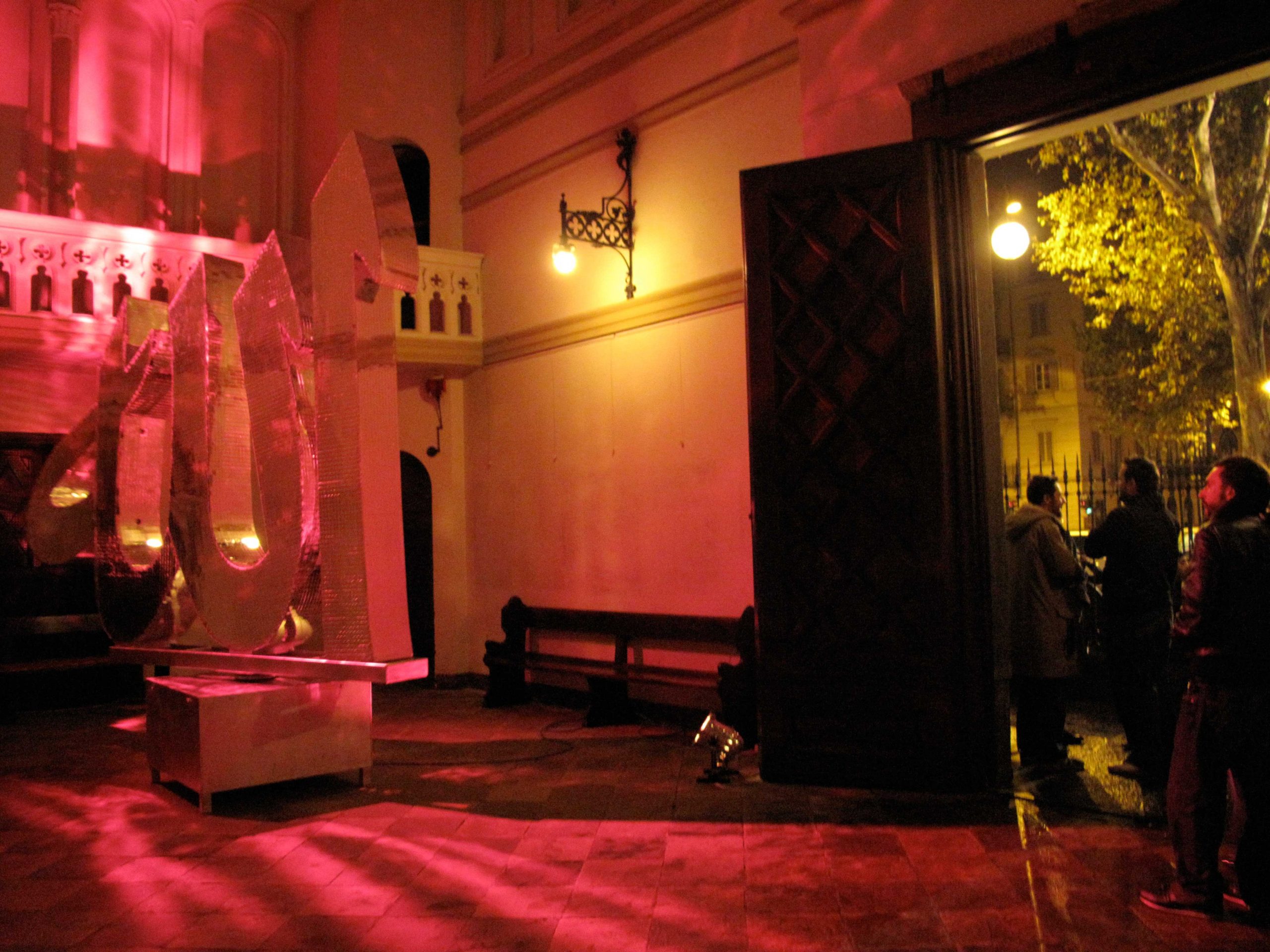 A’Salaam Alaykum: Peace Be Upon You is an interactive sculptural installation that displays the word “Allah” in Arabic. It is a rotating 4x4m sculpture made of glass mirror tiles that reflect the lights and environment around it, including the viewer. The artist portrays a generation living with war as a constant presence, and believes that dance is capable of bridging communities in conflict. Live music or a DJ accompanies this and viewers are invited to dance. As the music plays, the sculpture spins slowly, like a disco-ball born from the history of religion and conflict.

The work was commissioned for the Meteorite in Giardino; a yearly summer exhibition that takes place at the Fondazion Merz, in Turin. The location of this exhibition is the external “basin” where the tanks of the former heating plant used to be. It is a chance for local and international artists to create temporary outdoor site-specific works, open to the pubic. The artist’s objective was to create a work that both informed the public of the artist’s personal experiences of living in a post war country, as well as carry a universal message of peace. In her words, “We live under the constant humiliation of the horrific things we did to each other. During the civil war, militiamen threw people off rooftops, shooting them in mid-air just for fun. Today we stand side by side waiting to get into nightclubs. We dance a lot in Beirut. Dancing, it seems, has become a way to heal. As bodies move together in small dark spaces, we realize that flesh is flesh and we are all the same. As euphoria takes over, we try to forget why we used religion to kill. Why we found each other so different.”

El Khalil collaborated with a family of traditional furniture makers to sculpt the 4-meter lettering. The letters were carefully hand carved at the family studio in the foothills of the Italian Alps using traditional tools and methods passed down from generations. They were then transported to the studio of a local Turinese artist where El Khalil was able to manually apply the glass mirrors herself. The sculpture was assembled with the rotating motor onsite at the Fondazione Merz, with the help of the Foundation staff. The most challenging part of the process was creating an engine that could both carry the enormous weight of the sculpture and make it rotate. In the end, it was a reclaimed lawnmower engine that won out. For the opening, a DJ was flown in from Beirut to play Arabic pop music. The audience was very receptive and enjoyed dancing to the sculpture. But the great surprise was the inclusion of the local Tunisian immigrant community, who upon hearing the Arabic music, ventured into the Fondazione Merz for the very first time and joined in the dancing. Though they were neighbors to the Foundation, they had never visited for any exhibitions or events before.

Due to the success of the work, it was later exhibited in a church in Turin. Local musicians performed and residents from the neighborhood participated in dancing, experiencing the merging of two religions, two cultures. It has since been exhibited in Sardinia, Italy; White Box, Germany; Boghossian Foundation, Brussels; and Art 13, London. Ideally, however, this sculpture should be placed in zones of conflict, with the hopes of bringing people together, peacefully. The piece has only been exhibited in Europe, but the artist longs for it to come to the Middle East, where she feels it is most needed.