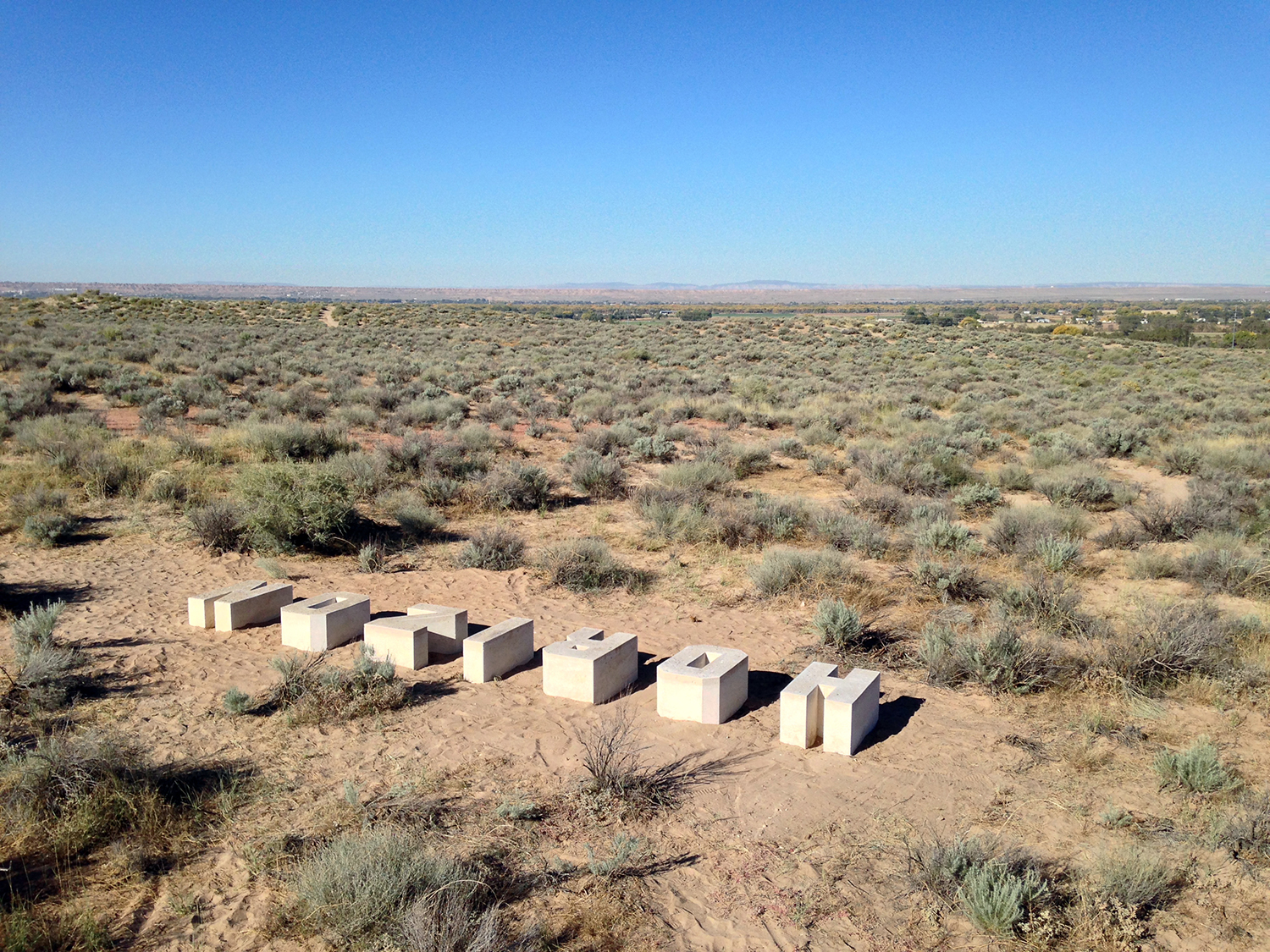 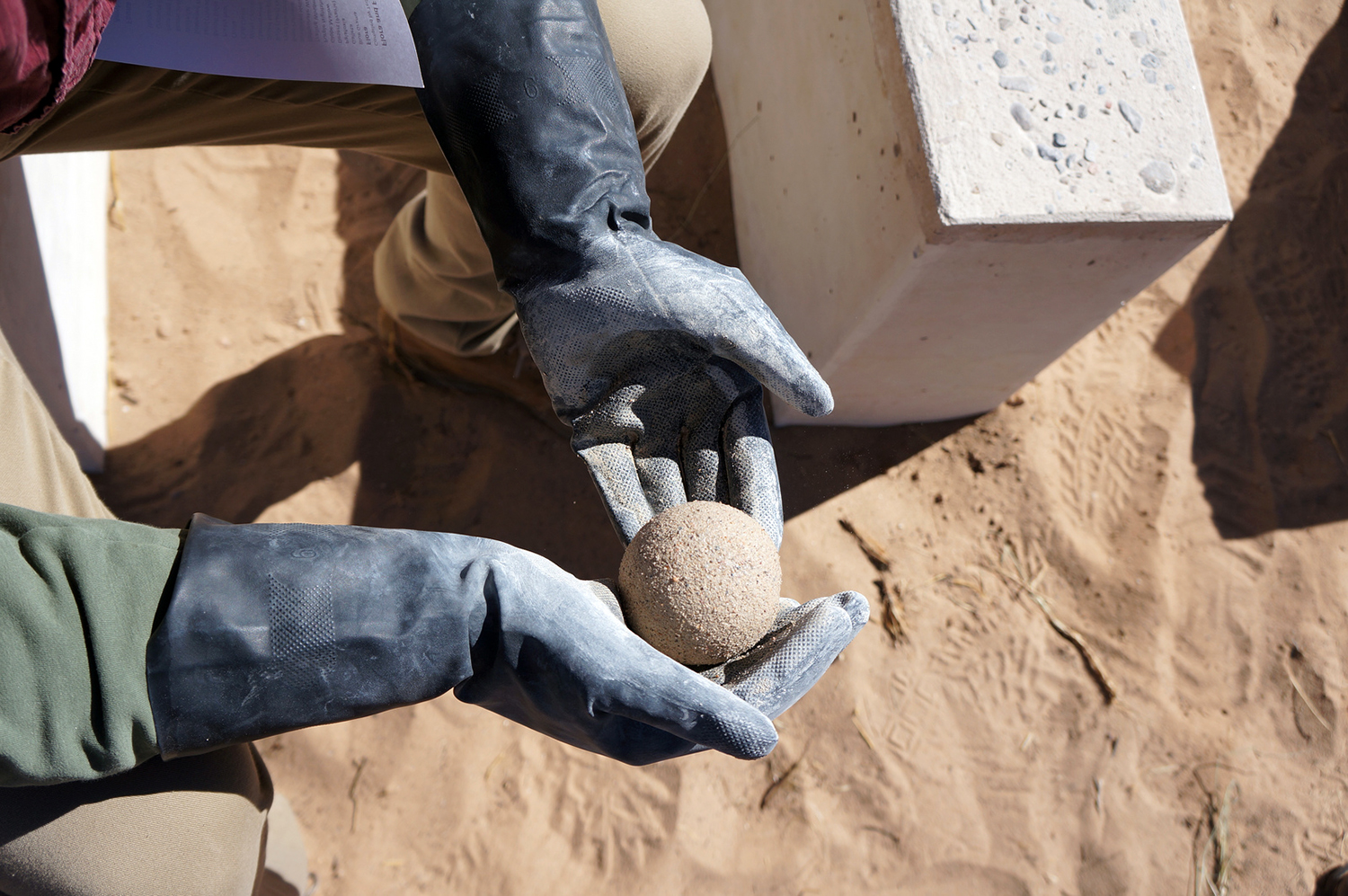 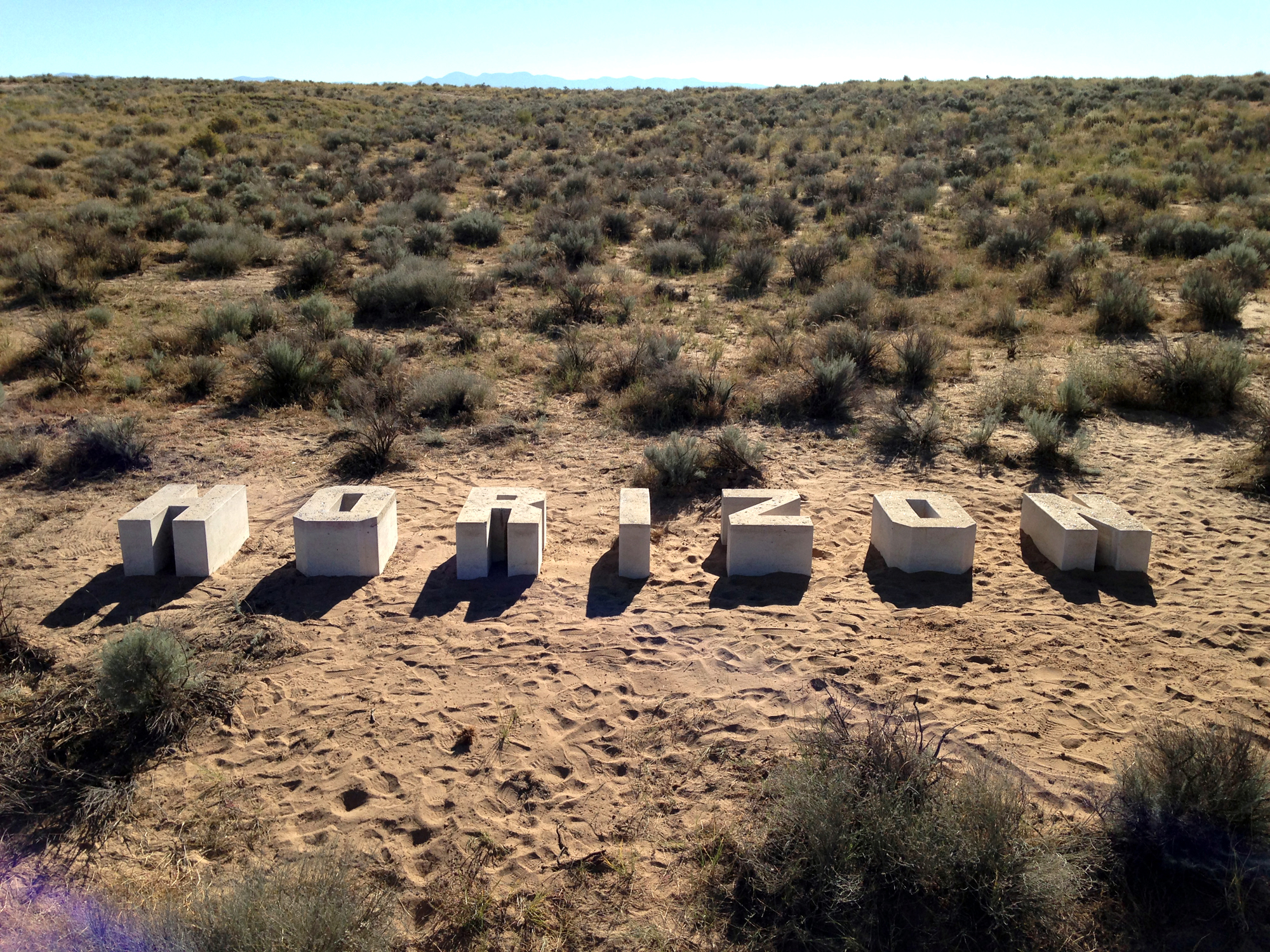 A New Horizon is a permanent, site-specific sculpture located in an undeveloped subdivision near the rural town of Tomé-Adelino, New Mexico, 40 miles south of Albuquerque. The sculpture consists of a series of cast concrete letterforms, each 1 ½ ft. tall by 3 ft. deep with an average width of 2 ft., spelling out the word “HORIZON.” The concrete was mixed and poured on-site, incorporating sand and stones from the site with water and white Portland cement.

The site for this project was originally acquired in a real estate scam and remains, along with surrounding properties, in a state of limbo: impractical/illegal to develop but impossible to protect as a natural resource. Geologically the site is part of a bajada, or merger of numerous alluvial fans composed primarily of sand and small smooth stones, overlooking verdant agricultural land along the Rio Grande. Locally “Horizon” has negative connotations as the name of the now-defunct land corporation that acquired the Tomé Land Grant, subdivided it, and sold the unimproved parcels to tens of thousands of unsuspecting consumers. The sculpture is in part a reminder of that history, but I also wanted to reclaim the word horizon and return to it some of its sense of futurity by pointing to the slippage between language and materiality.

A New Horizon was commissioned by Earthbound Moon (EbM), a nonprofit community arts organization that works globally to curate and produce publicly accessible contemporary sculpture. The project was developed over a period of two years working collaboratively with EbM, community members and volunteers. I also organized a community-based event marking the completion of the sculpture. A hybrid of contemporary Chautauqua and hands-on sculptural demonstration, “Llano Stories & Desert Dumbballs” consisted of a series of presentations and performances exploring the project site and its surroundings from different perspectives. Participants included: geology professor, Thomas Whittaker; naturalist, Ted Hodoba; musician, Gerard Bezzeg; author, Gregory Louis Candela with Sheri Armijo; community historian, Ramón Torres; and author, Shirley Blackwell. Attendees were also invited to make “dumbballs,” baseball-sized, concrete spheres first developed by artist, David Ireland. Dumbballs are formed by tossing wet concrete back and forth as it hardens, using one’s gloved hands as the mold. “Desert Dumbballs” were made of the same site-specific concrete as the sculpture.