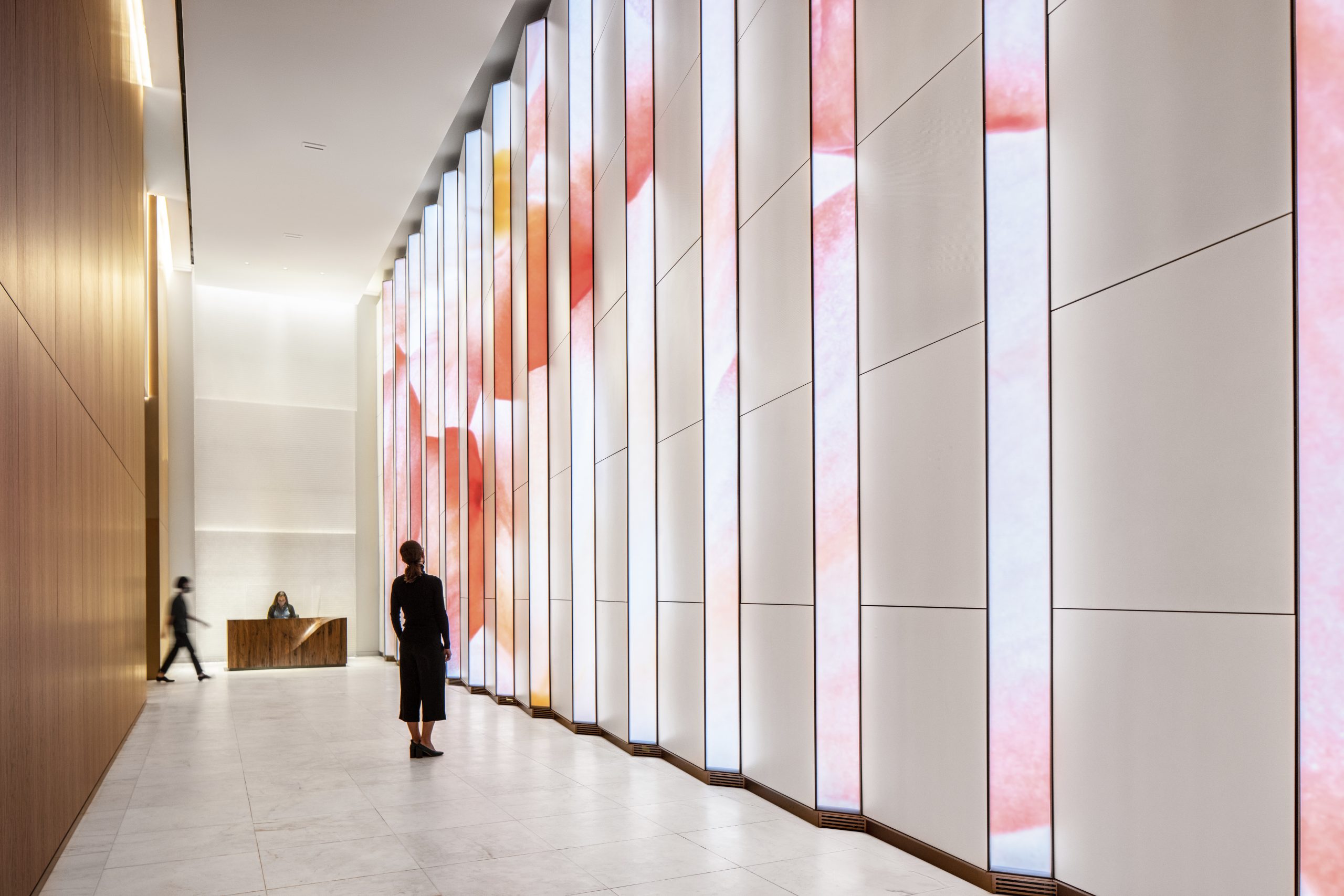 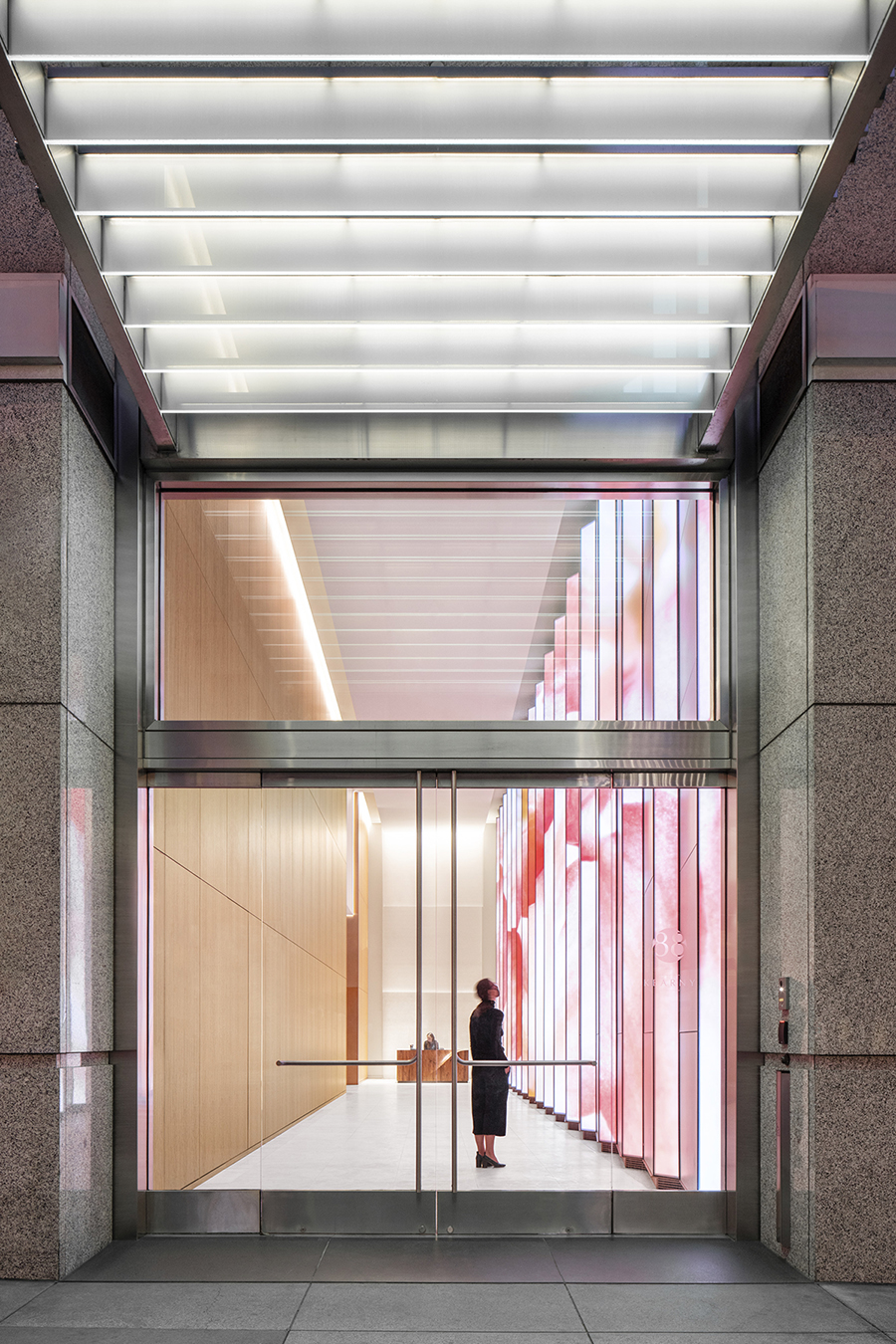 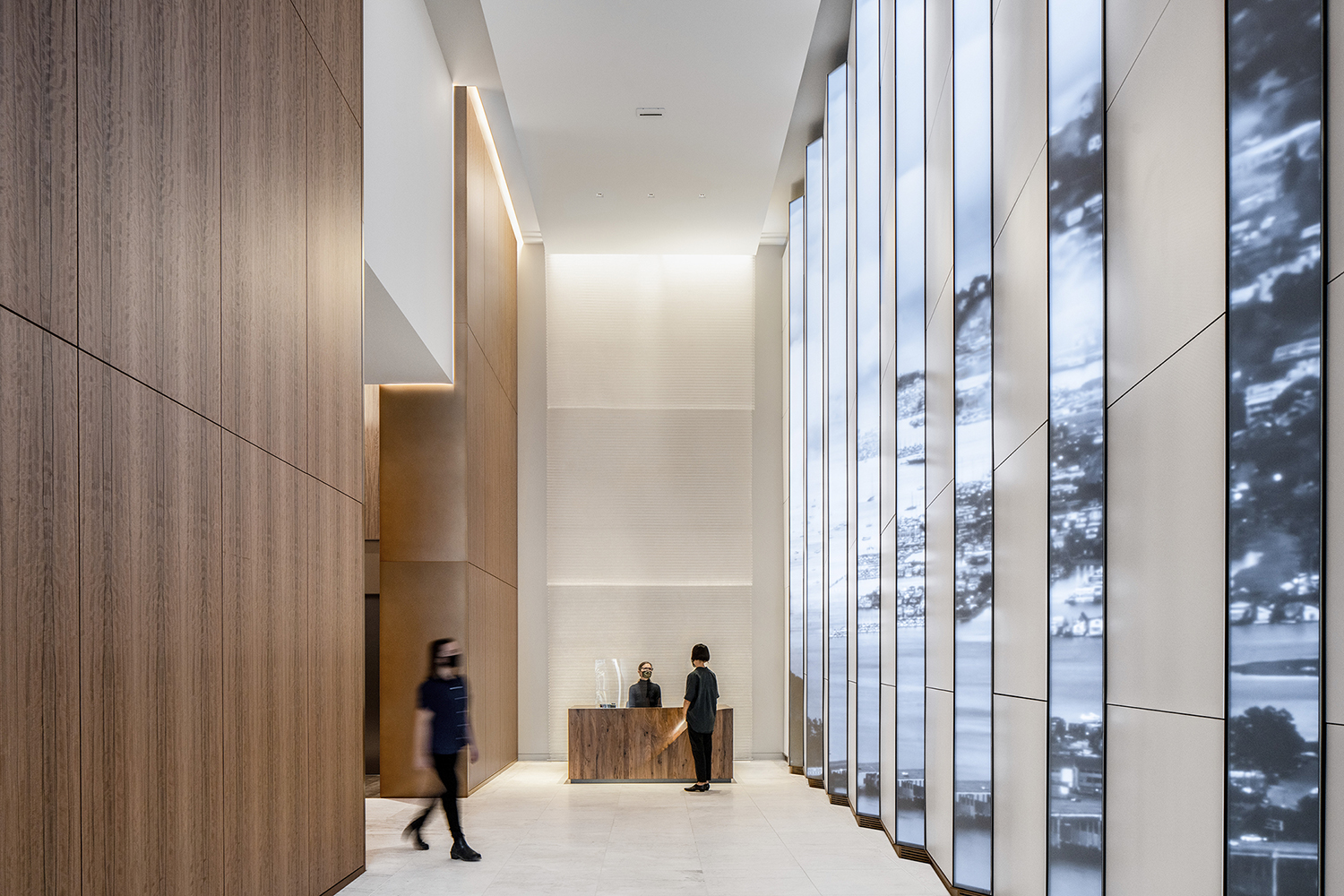 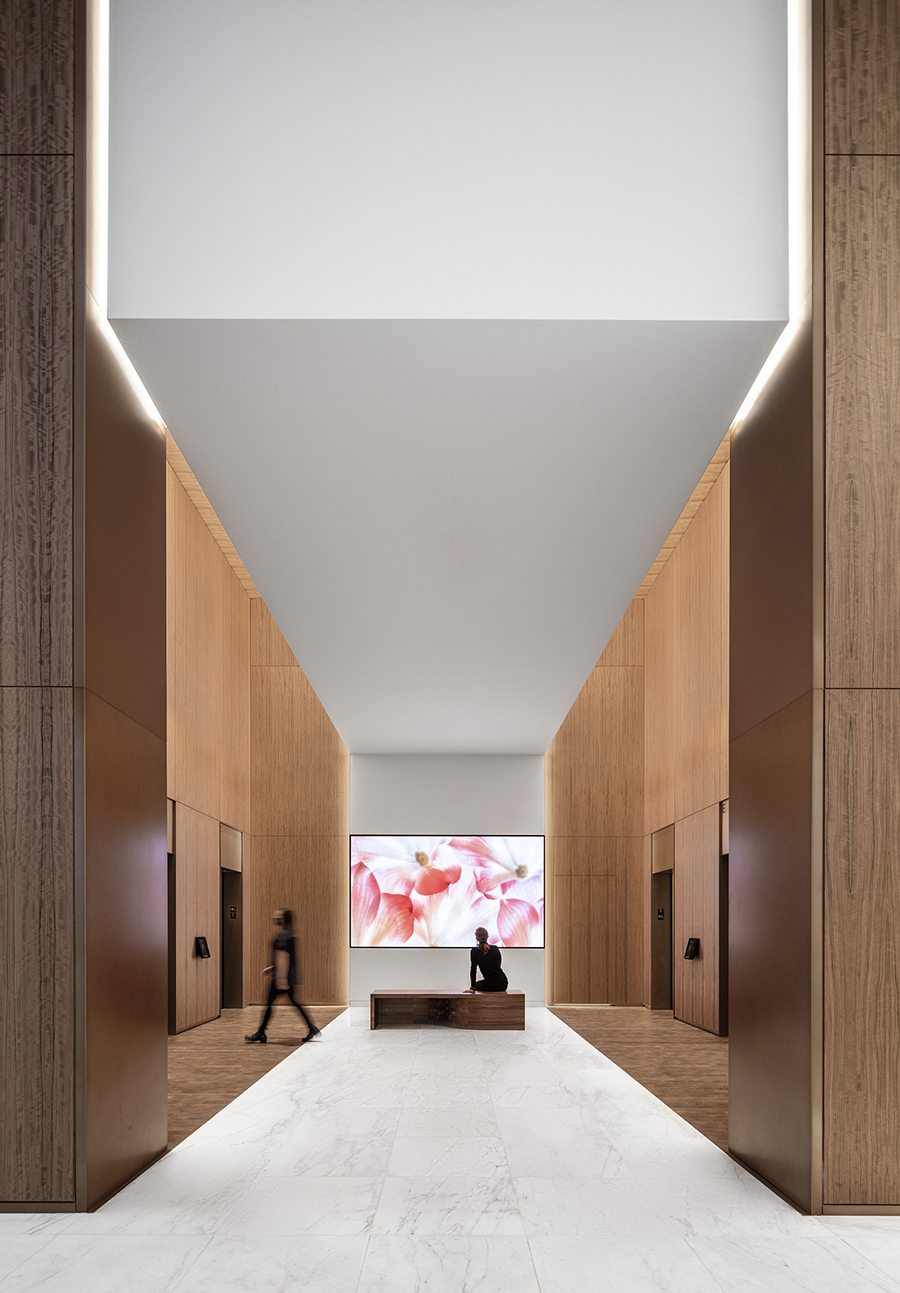 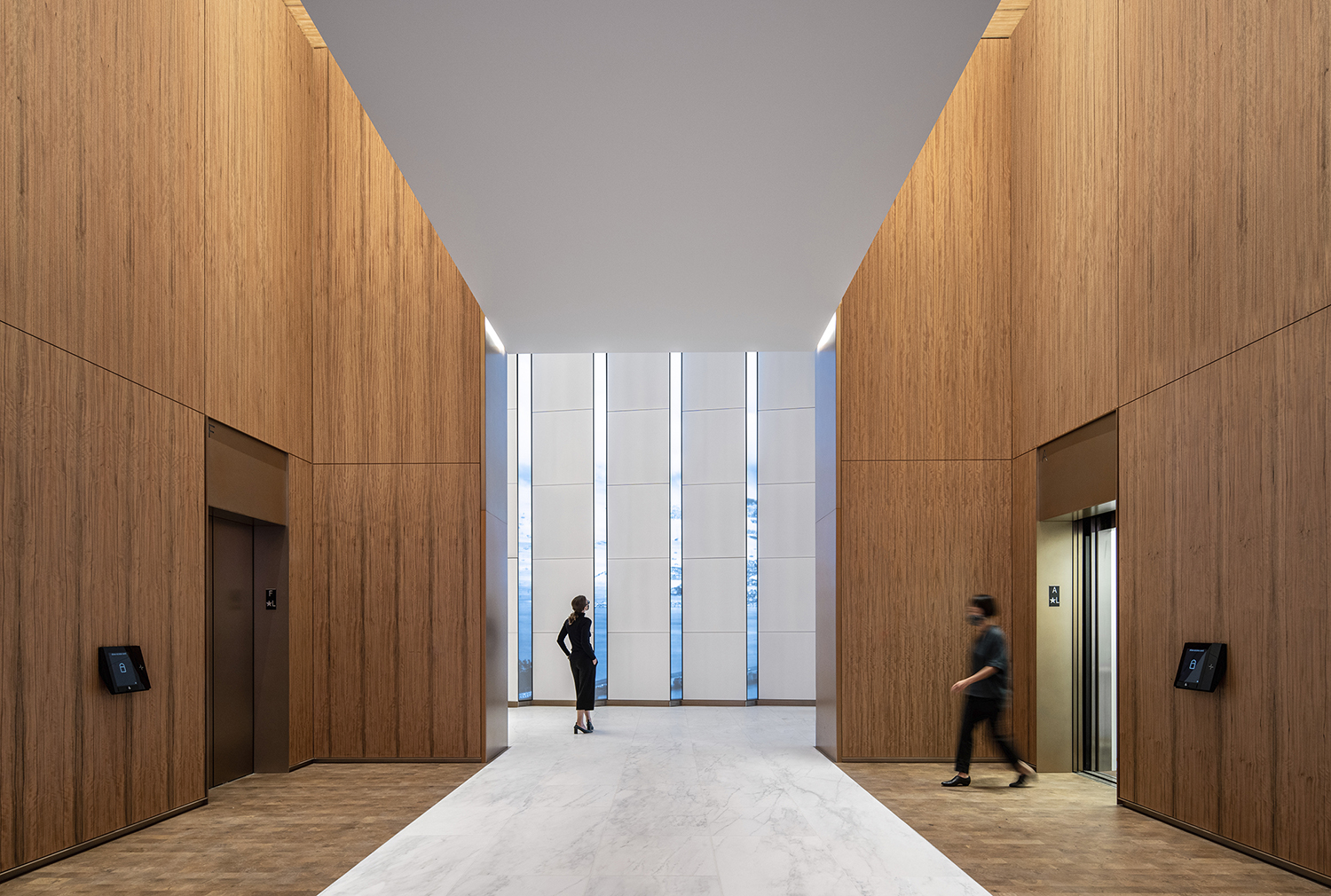 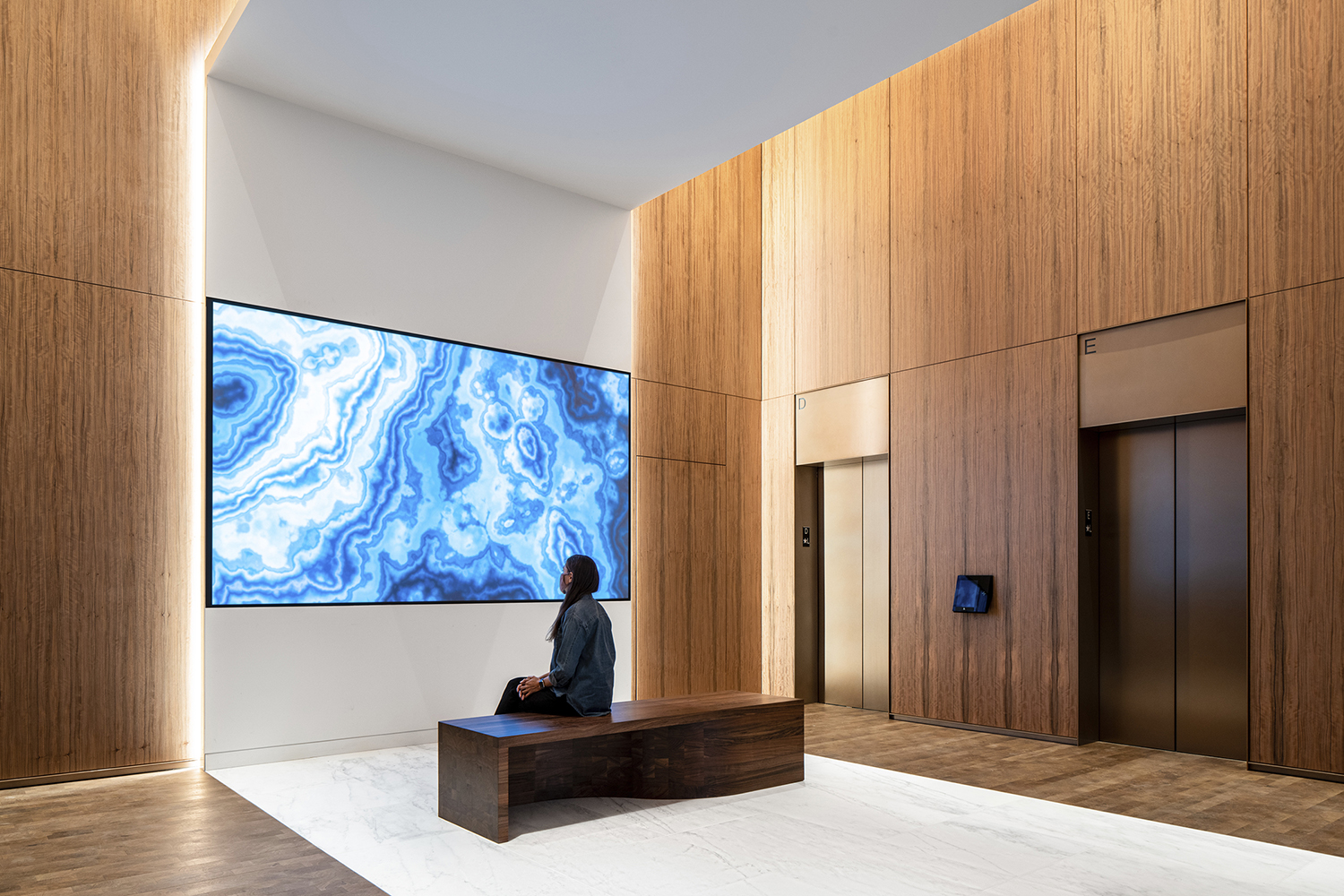 88 Kearny Lobby is a renovated office building lobby transformed by a digital interactive experience. The original space was an 120’ long, oddly proportioned corridor that felt like an afterthought though it was the building’s primary entrance. It was essential to the client to attract tenants in the active tech leasing market but not alienate more corporate tenants who traditionally occupied the building.

The solution was to turn its weakness into its strength and make the journey through the lobby a delightful, energizing and constantly new experience. The approach was to turn the corridor into a digital art gallery, which revealed itself only when viewed axially and walking directly through the lobby. From outside the building, you can see a dynamic image. As one enters the lobby, the image displayed on twenty-five 23-foot LED screens fragments into strips and interacts with guests then recompose again as you enter the elevator lobby. Leaving the lobby provides a different experience that begins with the entire image, then see only fragments, and subsequently only metal panels softly illuminated by the then invisible digital canvases.

The team worked to design and produce a library of bespoke digital content programmed to change and respond to lobby traffic with motion sensitive technology while also appealing to a variety of tenants. The real-time dynamic content maintains relevancy day to day, celebrating Bay Area culture, including events and holidays, natural scenery that shifts with the changing seasons and time of day, and ambient moments that showcase artistic process. Although much of the content is digitally generated, commissioned photography and time-lapse footage was also used to complete the multitude of unique thematic scenes. The content and the architecture were developed together, creating a space that both delights and responds to tenants. the goal was that tenants and their guests would never experience the same walk twice.

When creating a one-of-a-kind digital art gallery, the team designed the art to be revealed as the architecture unfolds throughout the space. To achieve this, our architectural designers worked side-by-side with our in-house digital design team to create a cohesive story and highly integrated solution. The design was studied closely from concept through construction to ensure viewing angles, finishes, lighting and spacing of elements were optimized for the digital art. The 23-foot digital panels narrowly slip between custom painted metal wall panels creating a unified surface while also disguising blind doors needed for access and exiting. The result is a seamless marriage of mediums which allows the content of the art to sing and the storytelling to effortlessly unfold.

Initially, the client sought to modernize the office building lobby that had not been updated since it was built in the late 1980’s. The building serves a variety of office users from design and technology companies to a law firm and even a consulate. It was important to the client to create a refreshed space to attract tenants in the active tech leasing market but not alienate the more corporate tenants who traditionally occupied the building. Once the team began designing, the client became excited about the opportunity to do more, to engage people in a new and exciting way and was an enthusiastic partner in the development of the design. For example, the client suggested we commission black and white photography as an approach. The project was such a success that the client commissioned photography for their annual report.