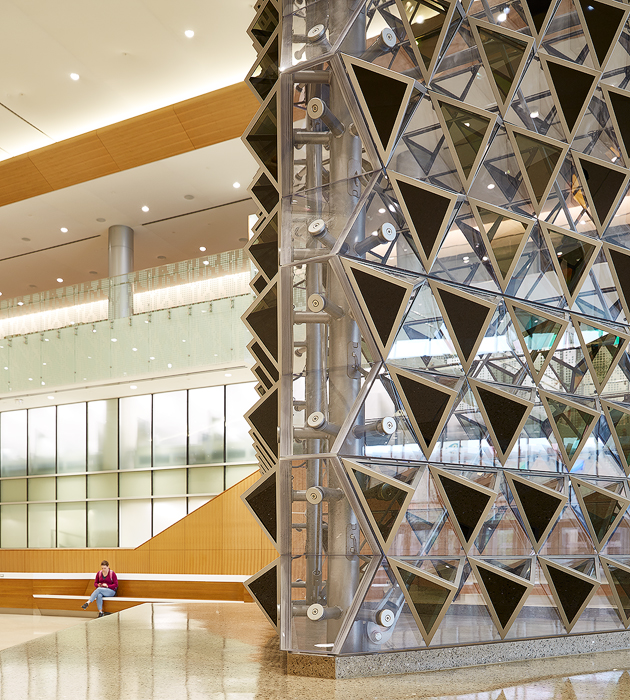 Liquid Crystal is comprised of active digital liquid crystal panels which are controlled to transmit and reflect light to varying degrees, creating an undulating, shimmering effect. Through sensing its environment these effects are influenced by the amount of activity in the space, resulting in a continuously evolving visual spectacle within the atrium lobby.

Jason Bruges Studio were commissioned to provide a focal point in the vast lobby at the Henry B. Gonzales Convention Centre. It was important to design with the location in mind in order to provide a sense of identity. Drawing inspiration from the San Antonio River that runs through the city, ‘Liquid Crystal’ explores the parallels between the flow of the water and the flow of people in the space. Liquid Crystal aims to incorporate the clean lines of the crisp architectural setting while offering movement and animation that softens the experience in the lobby.

Liquid crystal was a highly collaborative project that involved close working between JBS, Eventscape (our fabricator), our UK structural engineer, our Texas based engineer, the art consultant and the general contractor for the building to deliver our spectacular piece on time and on budget.

JBS chose to work with Eventscape, a specialist fabrication company based in Toronto Canada to fabricate and install the artwork. Eventscape were instrumental in helping JBS refine the detail design of the piece, and built several prototypes and samples for review and sign off before the fabrication of the final piece. We worked very closely together through our detail design stages with Eventscape, our UK based structural engineer and our US based structural engineer in order to ensure that the designs met the necessary construction regulations. We worked closely with Public Art San Antonio (PASA), the Henry B Gonzalez convention centre and Hunt Zachary Construction.