This classically-trained sculptor speaks to his process, his background, and how he taps in to fundamental human values in his art.

Humans have used art to transform spaces for the past 64,000 years, since the earliest known Neanderthal cave paintings. Art remains one of our most universal languages, revealing much about how we have grown and evolved. The earliest markings are abstract, showing symbolic thinking, which developed into more traditional representation, then narrative, and finally a rendering of the imaginary, or one could say psyche. With respect to this deep history, Gil Bruvel’s sculpture explores the nature of the mind and humanity’s place in relation to material, technology, sensation, and thought form. Through his work, we are able to consider the real, the imaginary, and the patterns that hold them together.

Bruvel’s immersion in the arts began at an early age, with both parents being working artists, his mother a piano teacher, and his father a pianist and cabinet-maker. Bruvel’s father taught him and his brother to sculpt and carve wood at the early age of six. By age nine, he began formal drawing lessons, painting at age twelve. At fourteen he entered an intensive classical restoration workshop, with over 3 years of coursework on restoring Old Masters. This rigorous program provided training, technique, and appreciation of not just the tools, but of the social and political context that has shaped art history around the globe. This foregrounds Bruvel’s connection to the history and tradition of art, and his desire to transmit truth on a human level, beyond social and political specificities. Bruvel began showing his work in galleries at age sixteen, and from there found patronage to forge a full-on pathway in the arts.

Bruvel’s 40-year history in the arts reflects both public and private creation, using traditional materials like cast bronze, steel, aluminum, and wood. He also embraces new materials and technological processes like 3D printing, sculpting in plastics, nylon, and high density foam. He notes an early interest in Surrealism, and a continued practice of meditation that informs a body of work that scours deeper layers of the mind. Surrealism emphasizes dream logic and the absurd, but Bruvel’s work is very much rooted in the real, a grounded exploration of sensation and mental patterning, using elements of contemplation and play to “penetrate reality,” rather than escape from it.

As an example, Bruvel’s “Flow” series features figures and functional objects capturing the dynamic analogy of a river through undulating ribbons of cast stainless steel. Pieces evoke a specific familiar form such a human skull, as in The Descent, or a face, as in Dichotomy, with lines flowing in organic and yet unusual directions. The Descent is an 8 foot tall, unmissable memento mori, a meditation on permanence and impermanence in a material form. In Dichotomy, we relate to the flow which splits sides, reminding us of right brain and left brain functioning, past and present, seeming dichotomies that are held within the individual. Stainless steel captures the flow as if it were a moment in time that would last beyond a human lifespan, as our impact does in fact live beyond us.

We are aware of the grooves and imprinted pathways that create the essence of these objects. Familiarity is subverted through scale and texture, replacing smooth skin and bone with arcs carved like water through a canyon, suggesting the essence or aura of a form, rather than limiting it to its familiar shape. These works conjure human capacity to observe and learn from patterns in nature seen in erosion, time, wind, and water. Bruvel evokes the flow of emotion and sensation, of life force energy that holds us together and pulls us apart, allowing us to think and act in new directions.

In recent works, Bruvel presents a series of meditating faces, sculpted from wood he calls “burn sticks.” This involves a ritual process of building up layered profiles, bringing the assemblage together sculpturally, and then burning the wood. “The softer parts burn faster”, he says, “and some parts hardly burn, or not at all.” Additional surface treatment leaves the wood’s veins accentuated, the alchemy of the process serving as a reminder that we are all organic, ephemeral beings with a limited time in which to act. Bruvel speaks of our deep human history with wood, how trees adapt and survive, and how we have likewise adapted and survived through their use as a primary tool and material. Interestingly, this series has a kind of pixelated effect, making it both earth-based and of the now, the true human experience. The pixelated outlines mimic our complex neural pathways, while his use of gradient color reinforces  interconnectedness.

As a classically-trained artist, Bruvel works both with and outside the well-worn pathways of art, seeking always to express more, to that which is felt, rather than described or rationalized. He speaks of risk-taking in creativity, a willingness to be comfortable with discomfort, allowing both artist and viewer to expand their preconceived expectations. Bruvel’s interest is captured by change. He says “Art can become stagnant if we stay at the same point of view…. But if we are mobile, open-minded enough, we can access more, even those things we might not understand.”    On a deeper level, Bruvel’s sculpture taps into fundamental human values, states of receptivity and pleasure, fluidity and ease, acceptance and compassion toward our surroundings and others. His work transforms spaces by providing the kind of felt-sense that wordlessly expands our human potential. 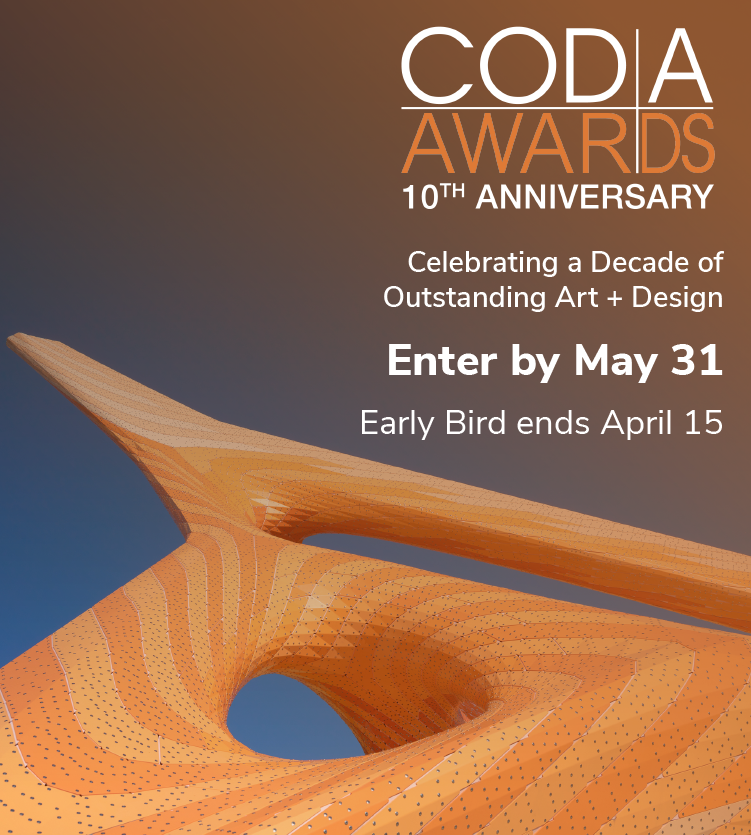 CODAworx welcomes Jessica-Christin Hametner, Editor in Chief of ICON magazine, as a juror for the 10th CODAawards! Hametner is an expert wordsmith… Read More

Creating a much-needed platform for artists working to change the world through placemaking art CODAworx, the hub of the commissioned art… Read More

CODAworx, the hub of the commissioned art economy at the center of the global movement of creative activism, is hosting… Read More