The Transformative Power of Light Sculpture:

The Illuminated Installations of Bill FitzGibbons 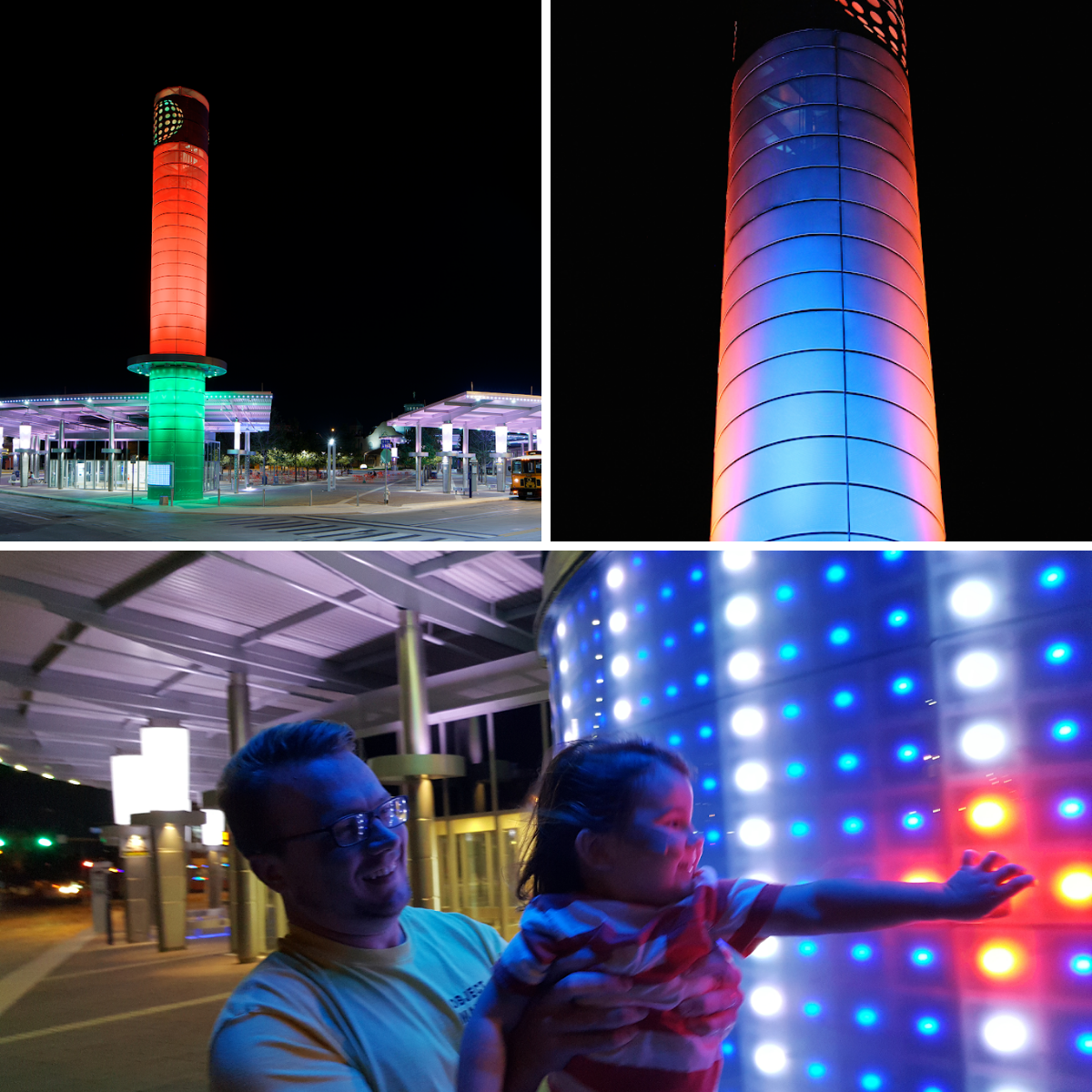 San Antonio based multi-media artist Bill FitzGibbons understands that in order to move people through art, the artist must understand the sense of wonder that is activated by the strategic use of light. His 80-feet-tall Chroma Tower with its interactive base invites passers-by to connect to the wall of lights through touch. Depending on the level of interaction, visitors become participants, and in certain cases seem to be transformed into dancers as their excitement grows and a feedback loop is formed with the lights inside the wall. Others passing by, perhaps not directly participating, become witnesses to a kind of spontaneous performance, and because at any moment one can join the fun, the work becomes a kind of fluid form of improv theatre and collective play. 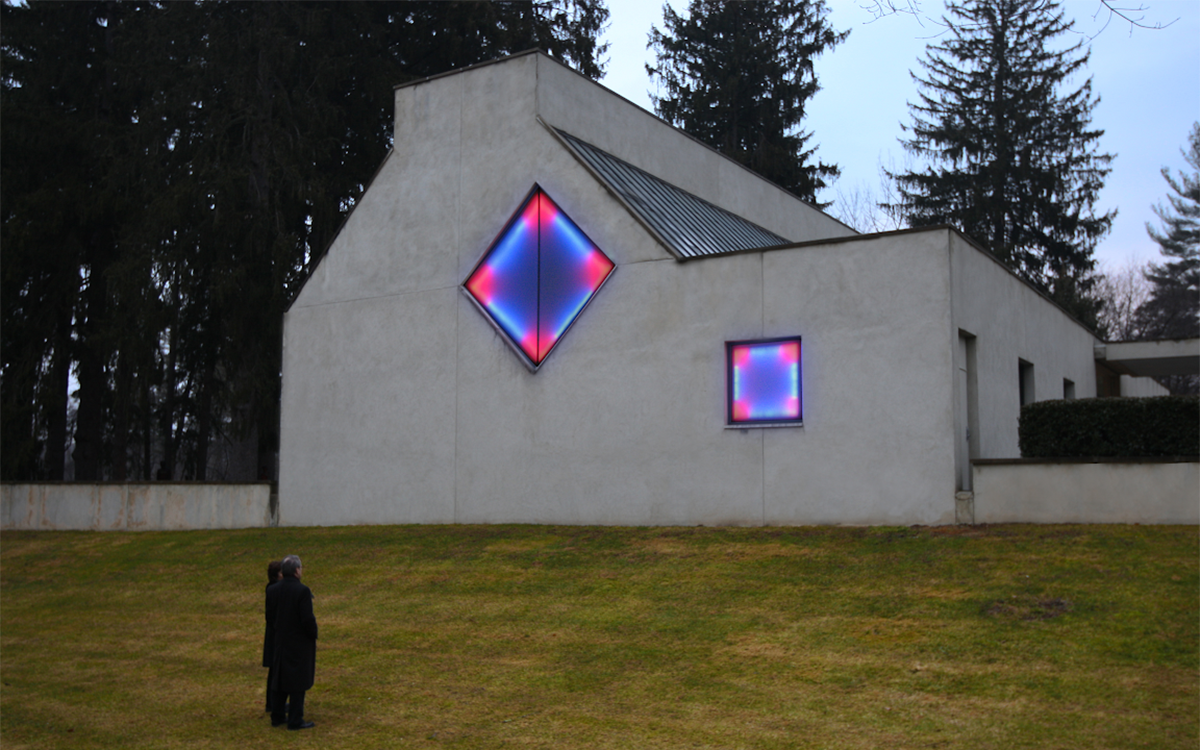 FitzGibbons’ light sculptures and installations share many of the same iconic elements as fellow American light artists such as Robert Irwin, Hap Tivey and James Turrell, as well as pioneers of neon like Dan Flavin.  This body of work emphasizes the primordial power of light, modulated and gradated for maximum emotional impact. His early experiments with neon lighting were an introduction to the possibilities of making colored light the core medium of his work. As a student, he was introduced to the glowing tubes and began to incorporate them into his sculptures. There were two drawbacks according to FitzGibbons: first, the fragility of the tubes, and second, the relatively small number of colors available. Years later, his introduction to the unlimited color choices of LEDs, and their virtually infinite programming capabilities, was like a key opening a gate to a new world of possibilities. This LED revolution in FitzGibbons’ life catapulted him into a new realm of creative endeavor as he began making large-scale public installations, some temporary and some permanent.

With “Katonah Lights,” the artist utilized two large windows of the Katonah Museum of Art’s iconic minimalist building, the work of architect Edward Larabee Barnes for a temporary installation. Slowly changing over-time, the LEDs behind the frosted windows transformed the square and the diamond openings into dynamic canvases, the rough, weather-marked exterior of the building acting as a perfect grounding for the vibrant jewel tones pulsating to create simple but mesmerizing geometry. It is this use of changing color that imbues FitzGibbons’ work as an unmistakable hypnotic hallmark. 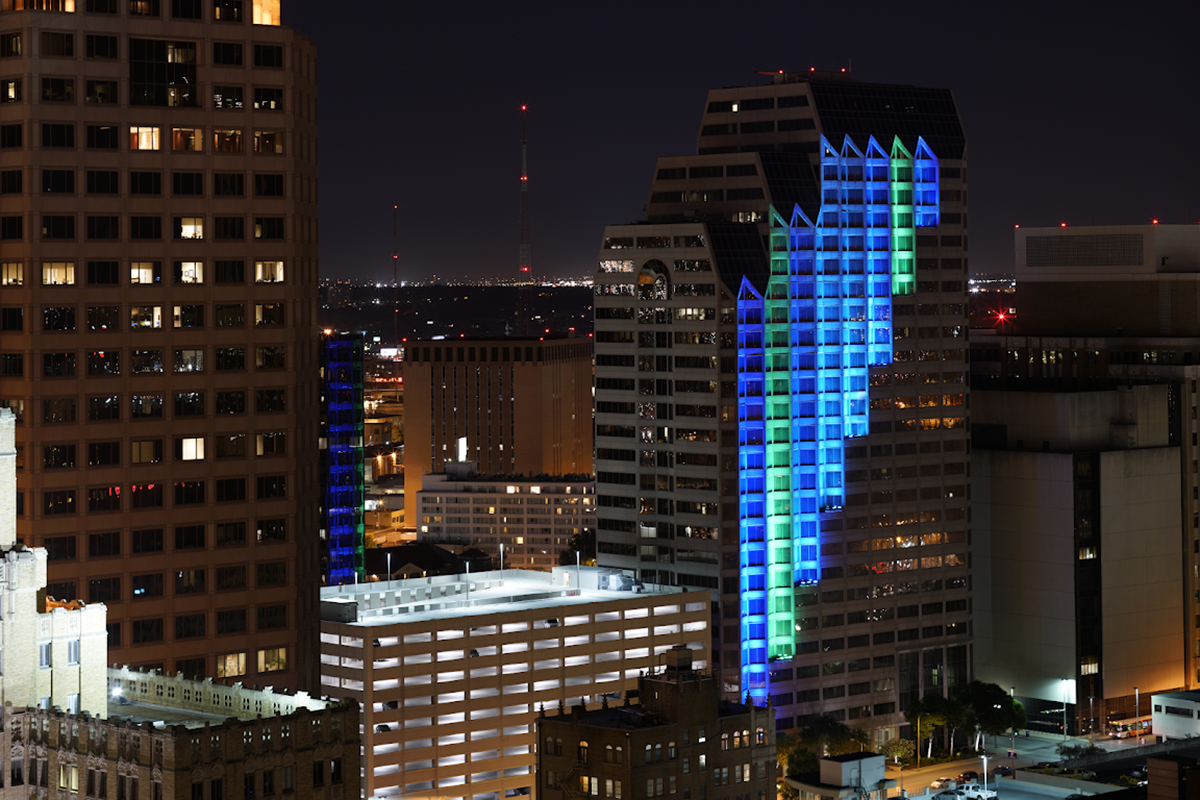 Light for FitzGibbons is a tool to re-shape and re-imagine already existing structures. In "Kinetic Skyline" the Bank of America building in downtown San Antonio had its mundane lighting exquisitely metamorphosed into a series of colorful stalactites: one may be reminded of the beautiful use of colorful illumination on the tours of certain limestone caves. Likewise, there is a musical connotation in the way the artist has chosen to arrange the changing slices of light: there are eight columns arranged in ascending order, just as there are eight notes in an octave. An analogical connection is created in much of the artist’s work between the order of the color spectrum and the harmonics of the musical scale. 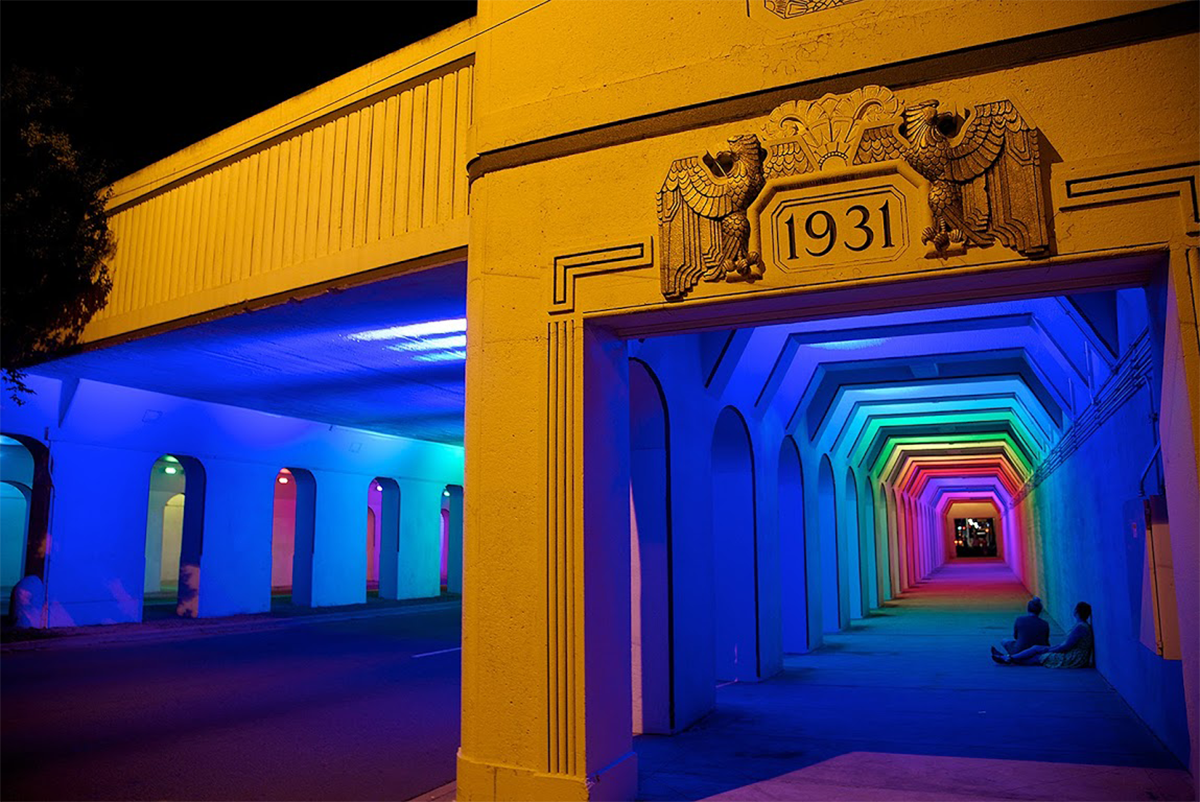 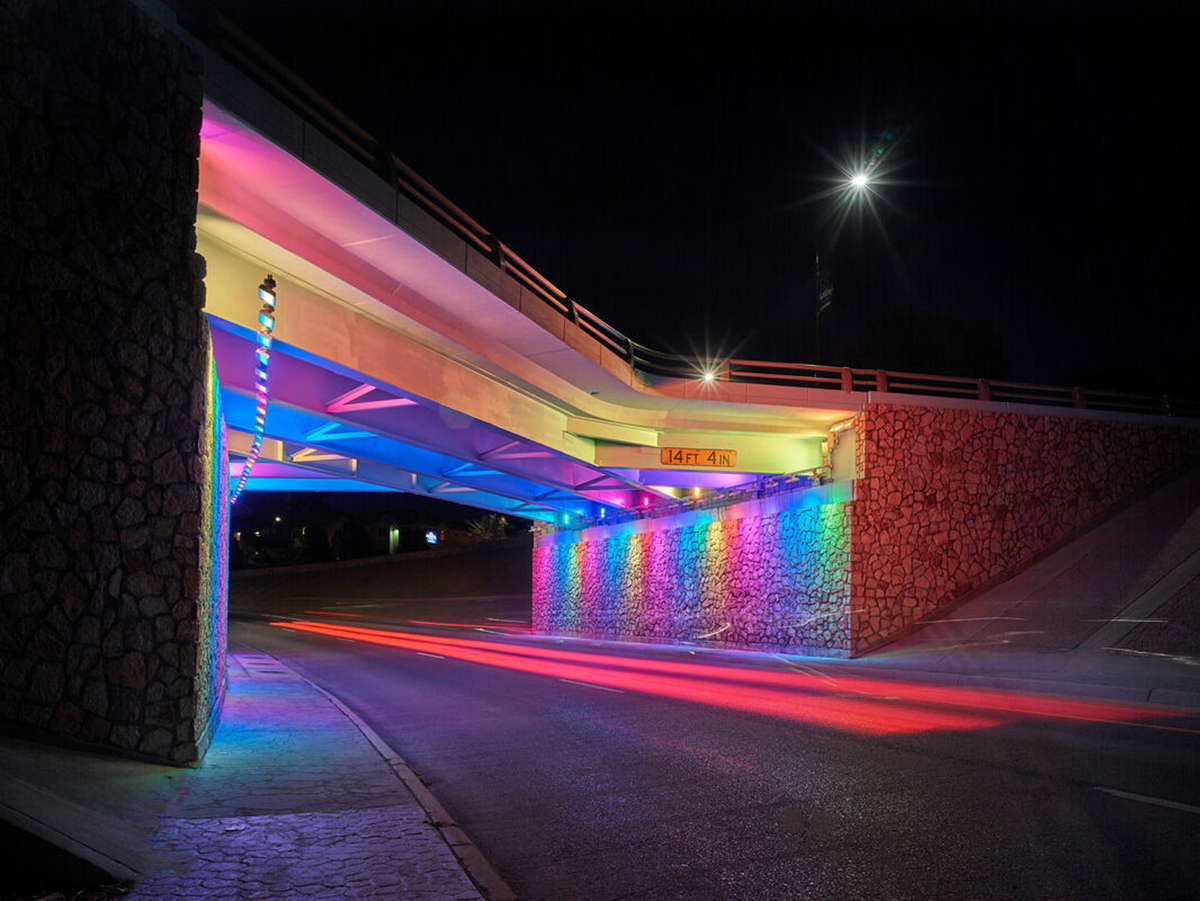 As an artist well-read in the works of psychologists and mythologists such as Carl Jung and Joseph Campbell, FitzGibbons has long been fascinated by the archetypal patterns that can manifest in even the most minimal formats. He has designed for large-scale public performances that partake in the elements of fable, mythology, and the re-enactment of local histories. He is therefore keenly aware of the way that space and light work together to set the tone of experience.

Just as towers and windows offer up a whole range of symbolic interpretations and dramatic possibilities for the imagination of the public, so do tunnels, those most mysterious and sometimes slightly sinister paths leading underground or from one realm into another. His “Light Rails” and “El Paso Passage” alter early 20th century cast concrete and contemporary underpass girders into magical gateways. On close inspection, one is made aware also of the use of side passages and of the overlapping of beams of lights to create the illusion of multiple openings. Fitzgibbons experience in creating heightened, peak experiences for public theatre are echoed in these silent “stages of the night”, inviting the traveler to leave the space of audience member and enter into a realm of enchantment, then exit back into the ordinary world, perhaps having been changed by the experience of being bathed in the passage-way of rainbow-radiance. 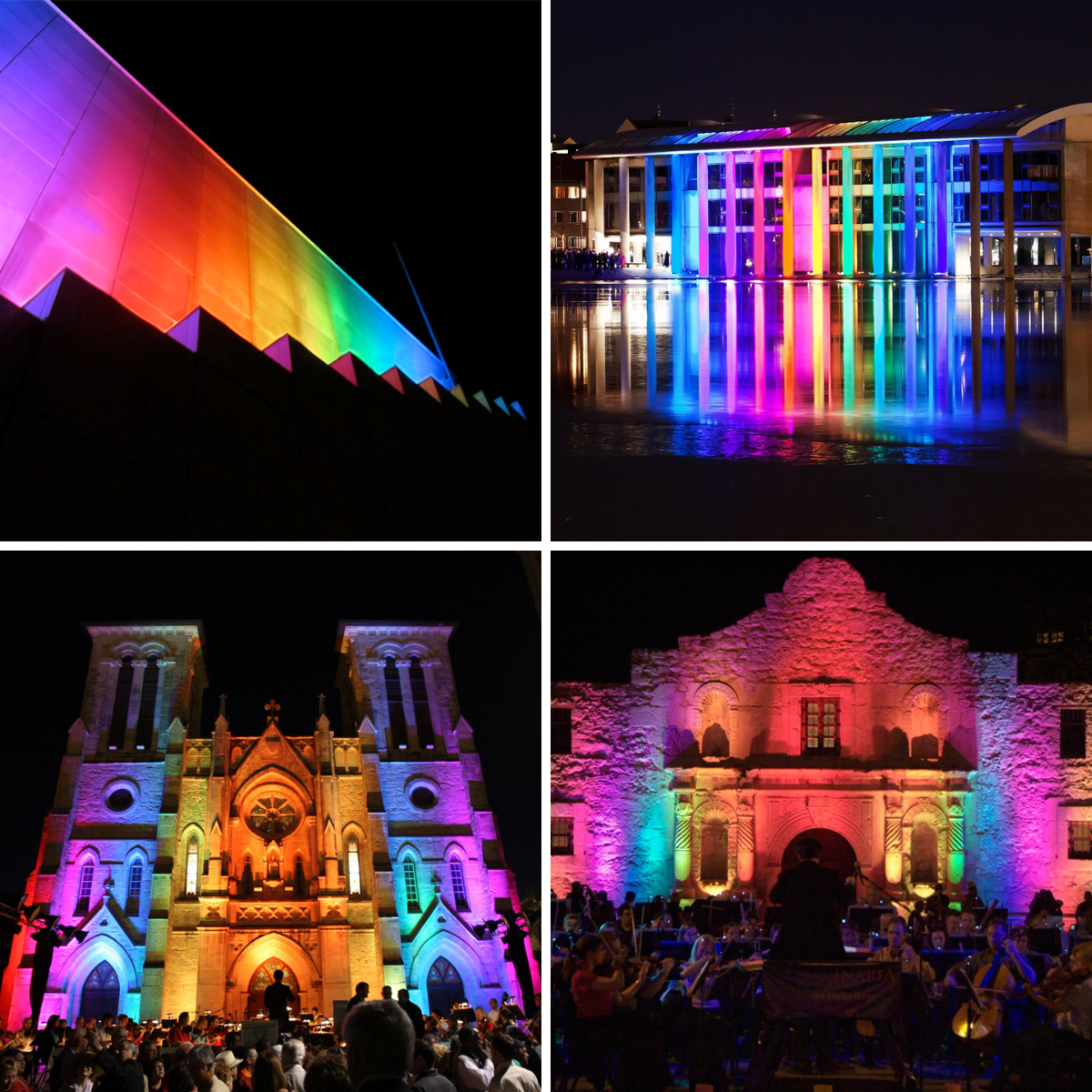 Staircases, colonnades, cathedrals and fortresses are four more archetypal structures found in FitzGibbons’ color-transforming output. In each case beloved community landmarks were transformed through projections often combined with musical performances to match the rhythmic changing of the lights. The Knoxville Museum of Art (another Edward Larabee Barnes’ structure), became a celestial staircase leading through the darkness. Reykjavik City Hall in Iceland glowed like a hovering temple accompanied by the powerful sounds of a full choir performing live for the spectators. The main plaza and neo-Gothic church façade in San Antonio burst into a pageant of changing hues accompanied by the cities symphony. And the Alamo itself also lent its legendary outline along with full orchestral accompaniment to another light-based intervention kicking off the opening of Luminaria, the city’s annual festival of the arts.

For more than three decades, Bill FitzGibbons’ light-works have transformed public spaces, creating a deep sense of mystery, magic and community connection. As the poet Goethe wrote in his famous treatise A Theory of Colors: “The highest goal that man can achieve is amazement.” 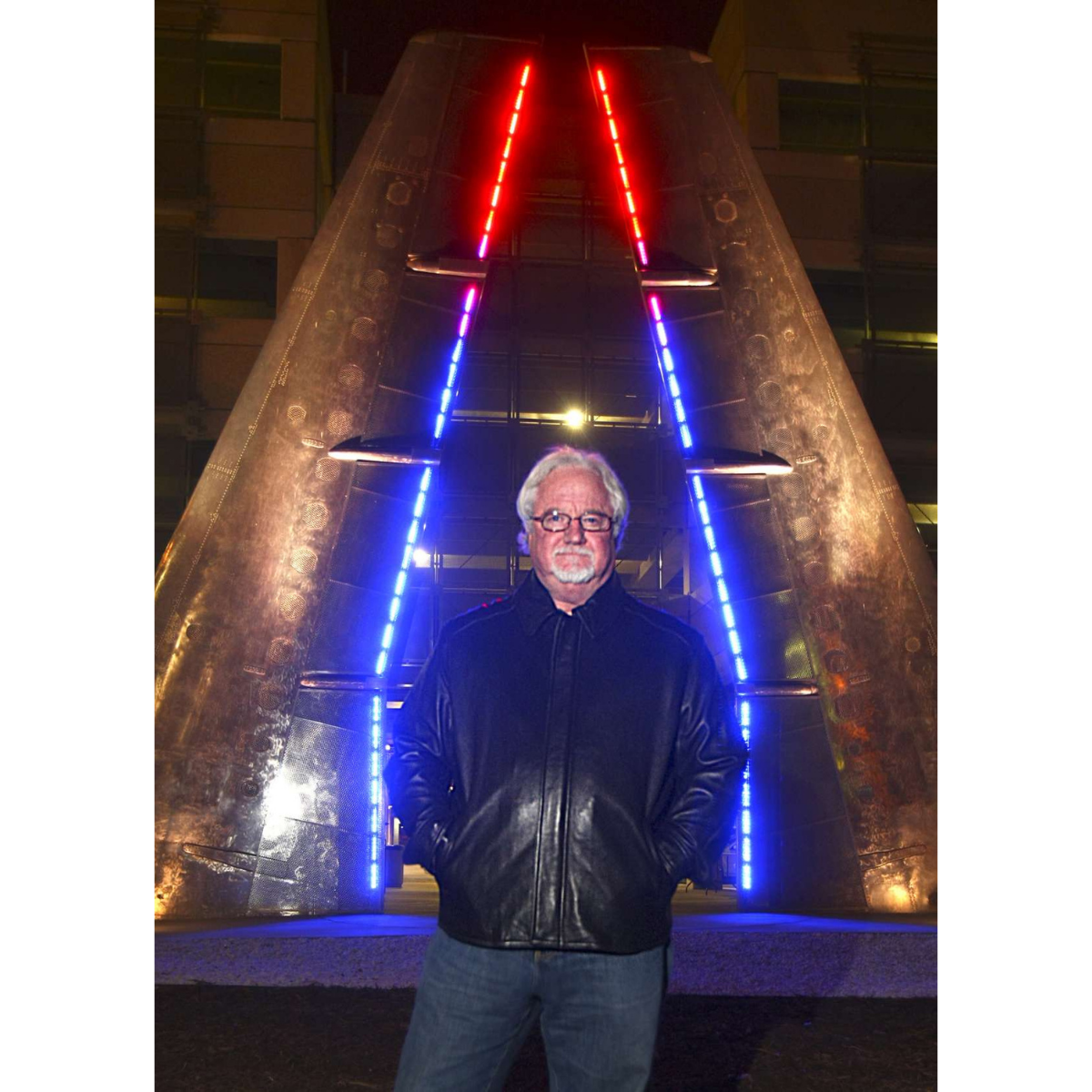 For more information on the illuminated works of Bill FitzGibbons:

Watch: many of these installations in motion

See: his profile on CODAworx

All images provided by Bill FitzGibbons