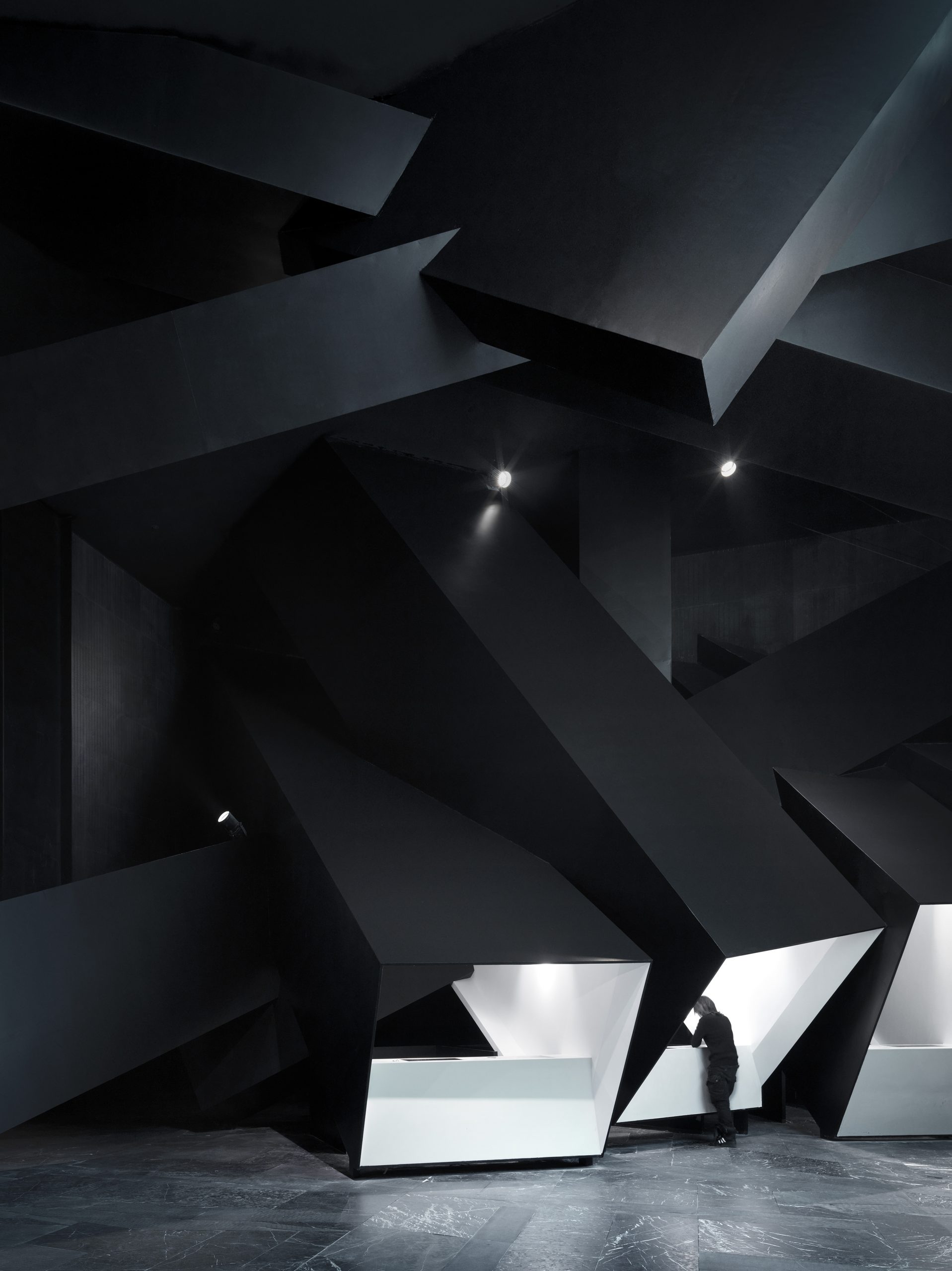 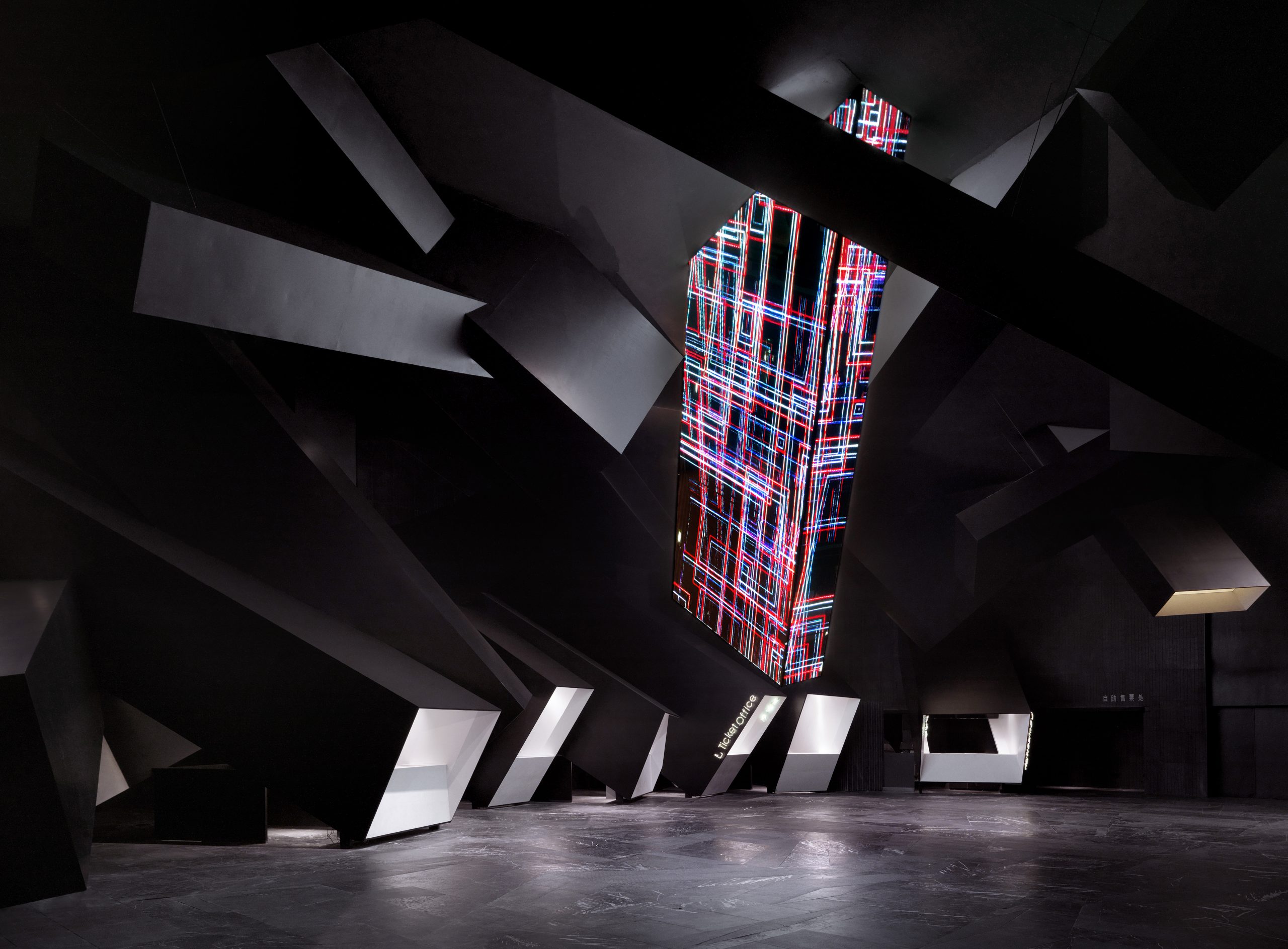 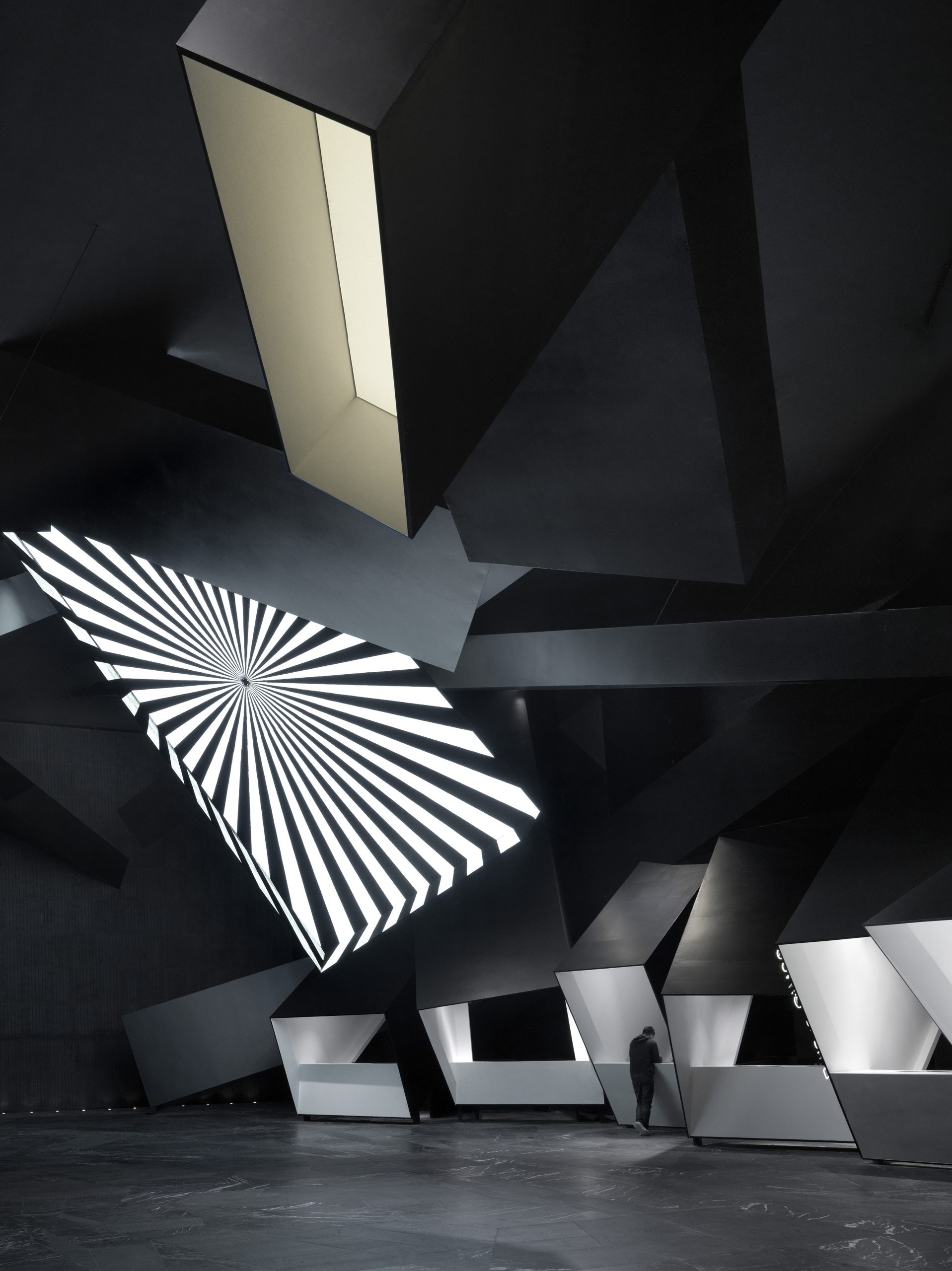 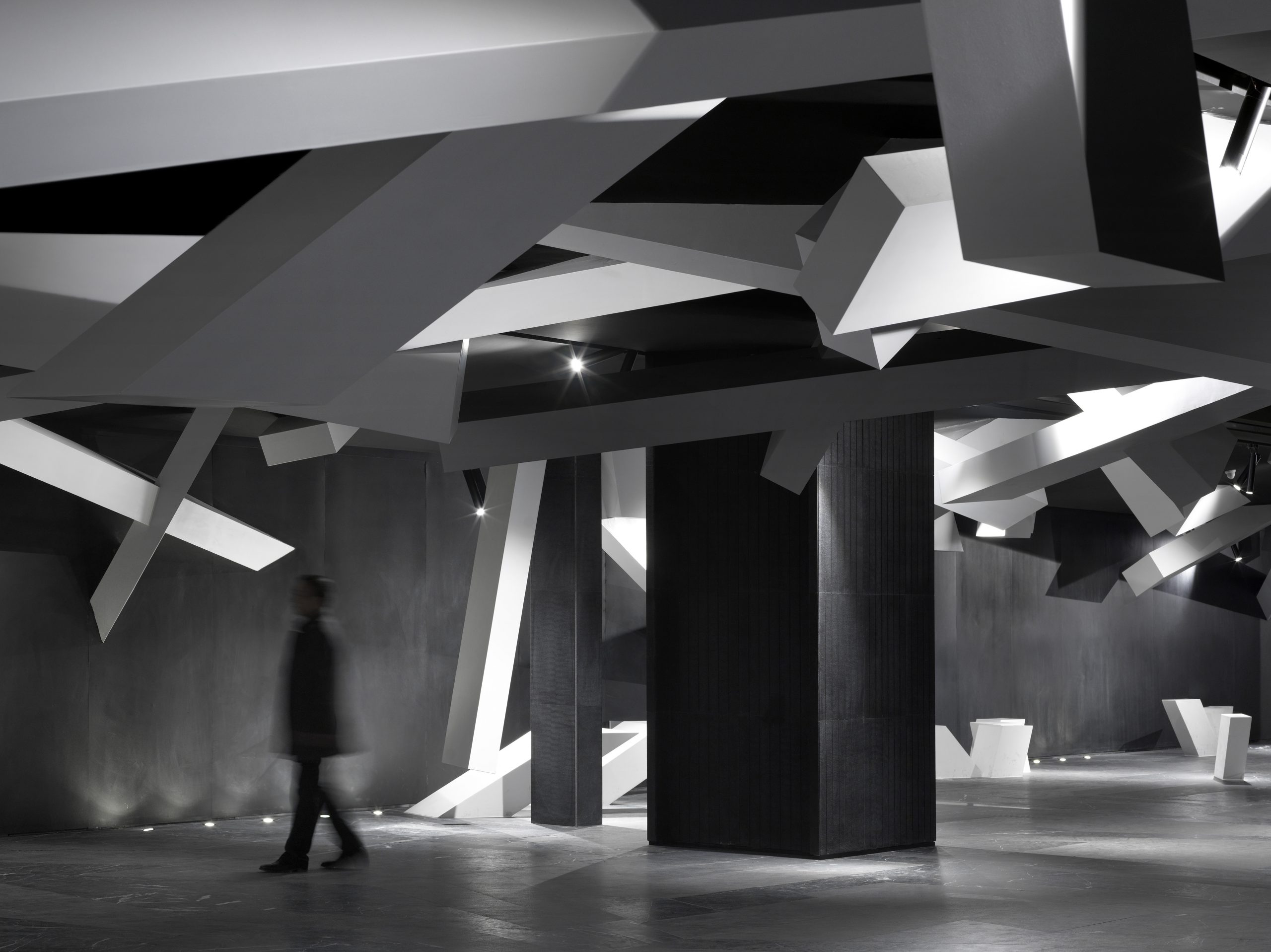 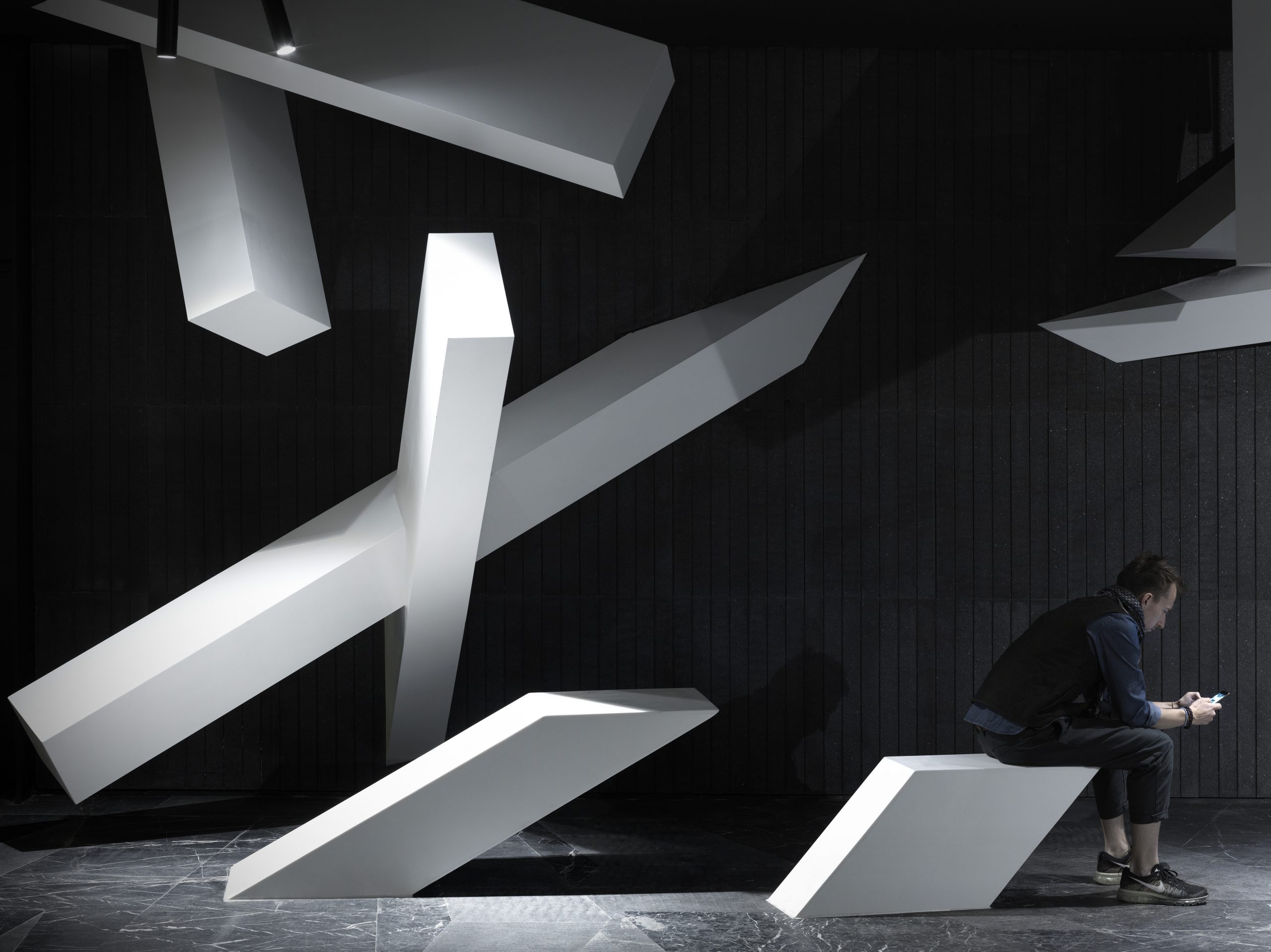 The cinema resembles a dramatic scene after an explosion in Sci-Fi movies. Black and white 3D boxes of various shapes and sizes engulf the entire cinema, conveying a futuristic and multi-dimensional feeling. Rectangular box-shaped concessions and ticket kiosks incline in different angles, camouflaging themselves in the background.

Along the corridor, white metal pillars grow towards different directions, decorations are placed randomly. In the auditorium, 3D square-shaped sound absorbing materials scatter to point towards different angles, creating a spectacular scene. In the washroom, pillars elongate from the ceiling to create a sense of pressure, matching with futuristic square basins.

In this project, we did not integrate any commission artwork. Instead, we believe the by designing our own feature, furniture, lighting, the space is already very rich and can portray the concept behind the design. The size, location, and direction of each decoration were carefully designed, ensuring that it portrays the designers’ message in the best way. The space itself is an art piece.

The designers aim at giving cinemas a new meaning. Instead of merely a place to watch movies, the design of the cinema itself can greatly influence the audience’s movie viewing experience. The cinema acts as a prelude of their experience with the movie, to prepare the audience for immersing themselves entirely in the movie world.

While creating a dramatic effect, the decorations are part of the cinema’s facilities. For example, the “falling” pillars in the corridor serve as seating area, in fact many children treated it as a slide and loved that! In the auditorium, the wall full of sound absorbing cubes is functional in presenting the best acoustic effects. In the washroom, cuboids are lamps, ventilation fan, hand wash basins and rubbish bin. Merging decorations with facilities have created a harmonized atmosphere in the cinema.

The client has given us a lot of freedom in the design of this cinema, without any limit in the design style and direction. Our previous collaborations have given them confidence in our ability. In the beginning of the collaboration, the client had no idea of what design concept they wanted, they trusted us and let us propose the best design proposal we had. We created a few concepts for them to choose from, and they chose the final design based on our advice. We are really grateful for having a client who trusted us whole-heartedly.

As the decorations are located in a cinema, it is crucial to plan where to place them to not block the audience walking around the space. The location and form of the decorates were specially designed by the designers, to balance their aesthetic value and functionality. In order to accurately realize the designs, the decorations are custom-made and carefully installed according to 3D models created by the designers. Even the distribution of sound absorbing cubes in the auditorium was specially designed and required accurate installation.

As the fire regulation is very harsh for cinemas in Mainland China, it restricts the choice of materials used in the cinema design. Hence, black stones were chosen for the wall and floor in the lobby; ticketing counters are boxes made of metal, creating a working space for the staff; in the corridor, pillars on the ceiling are made of flame resistant material painted in white, while pillars on the ground are white artificial stone. These materials created an elegant but futuristic atmosphere, which matches with the theme of Sci-Fi movies in the cinema design.