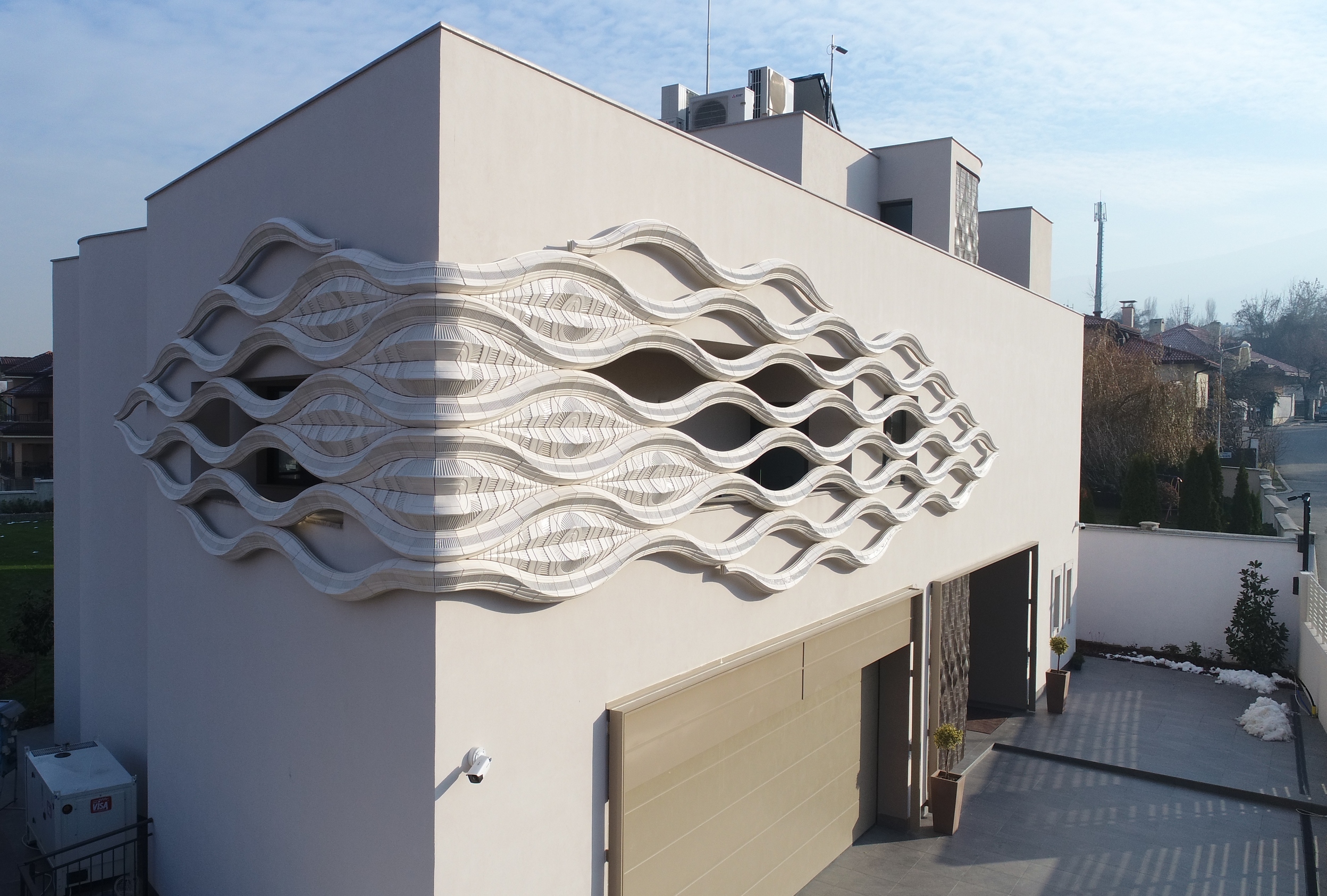 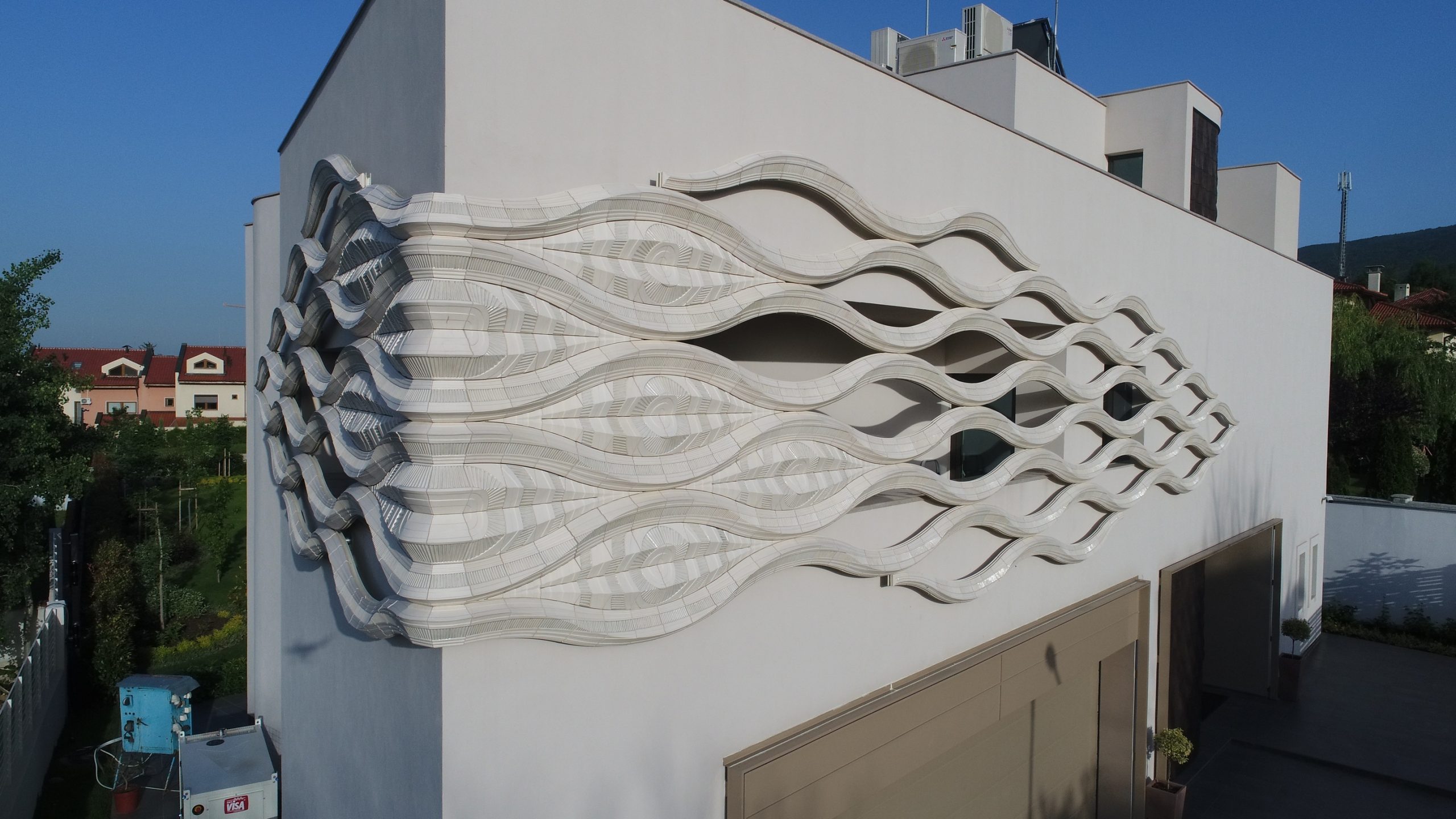 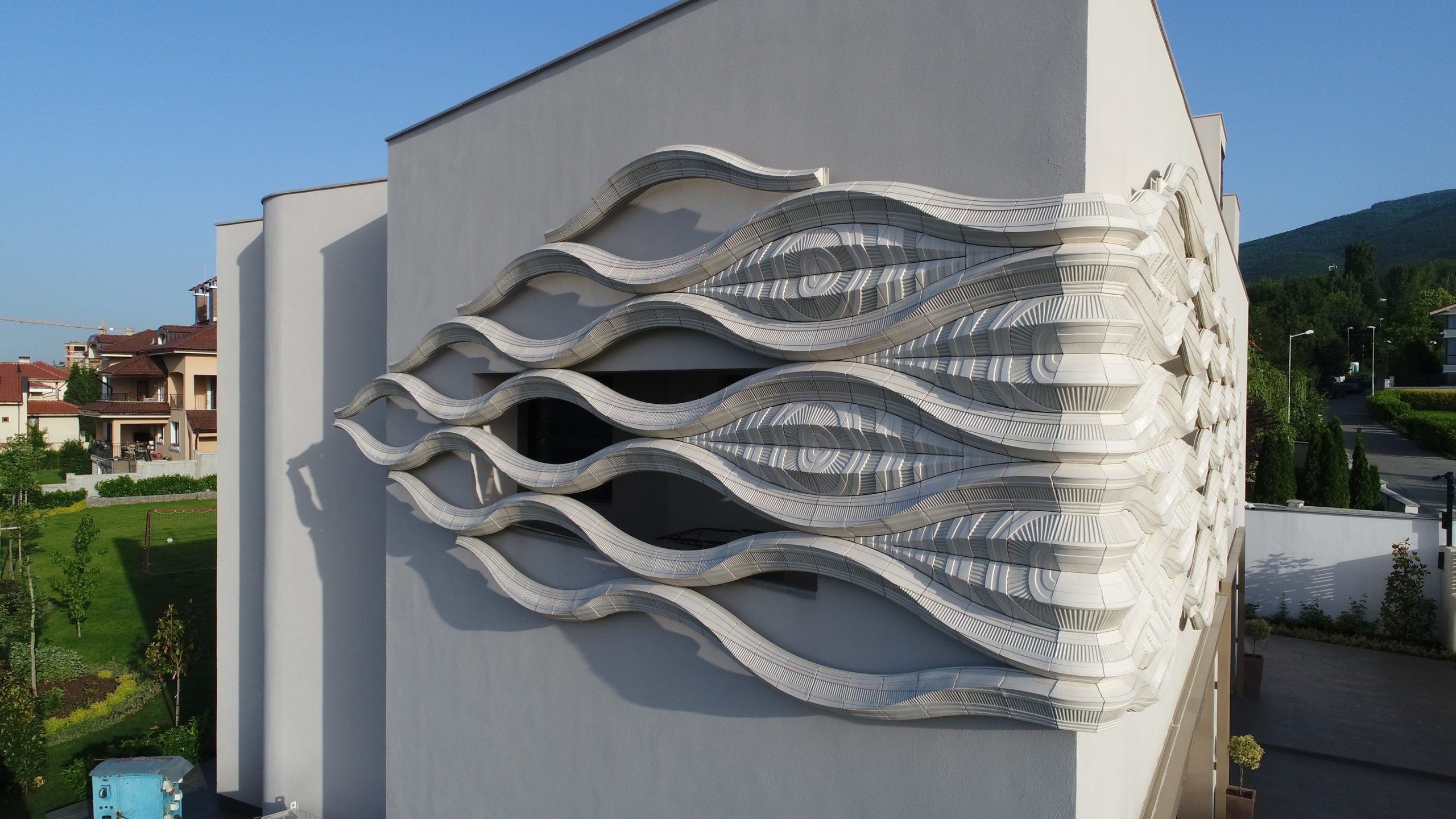 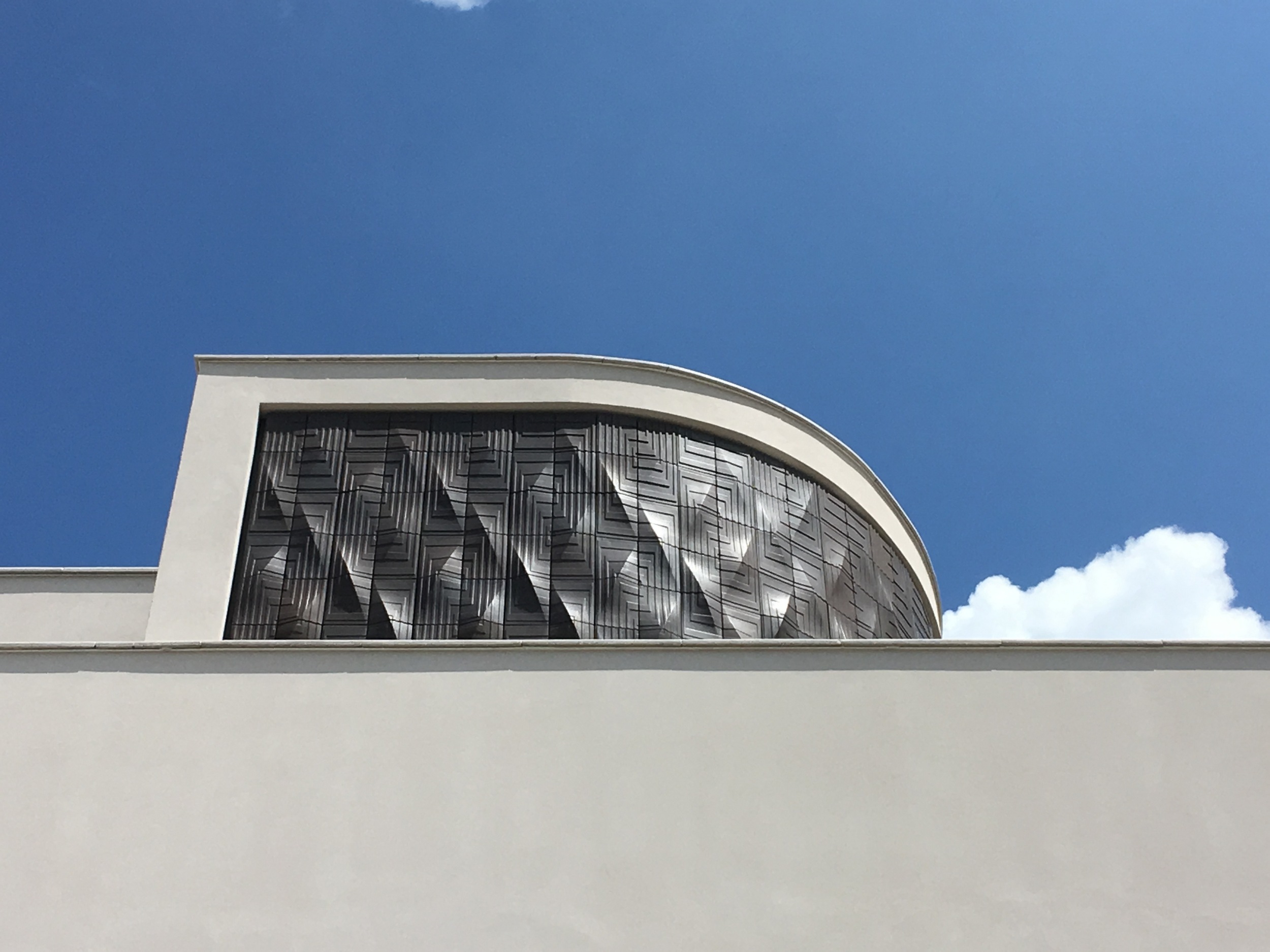 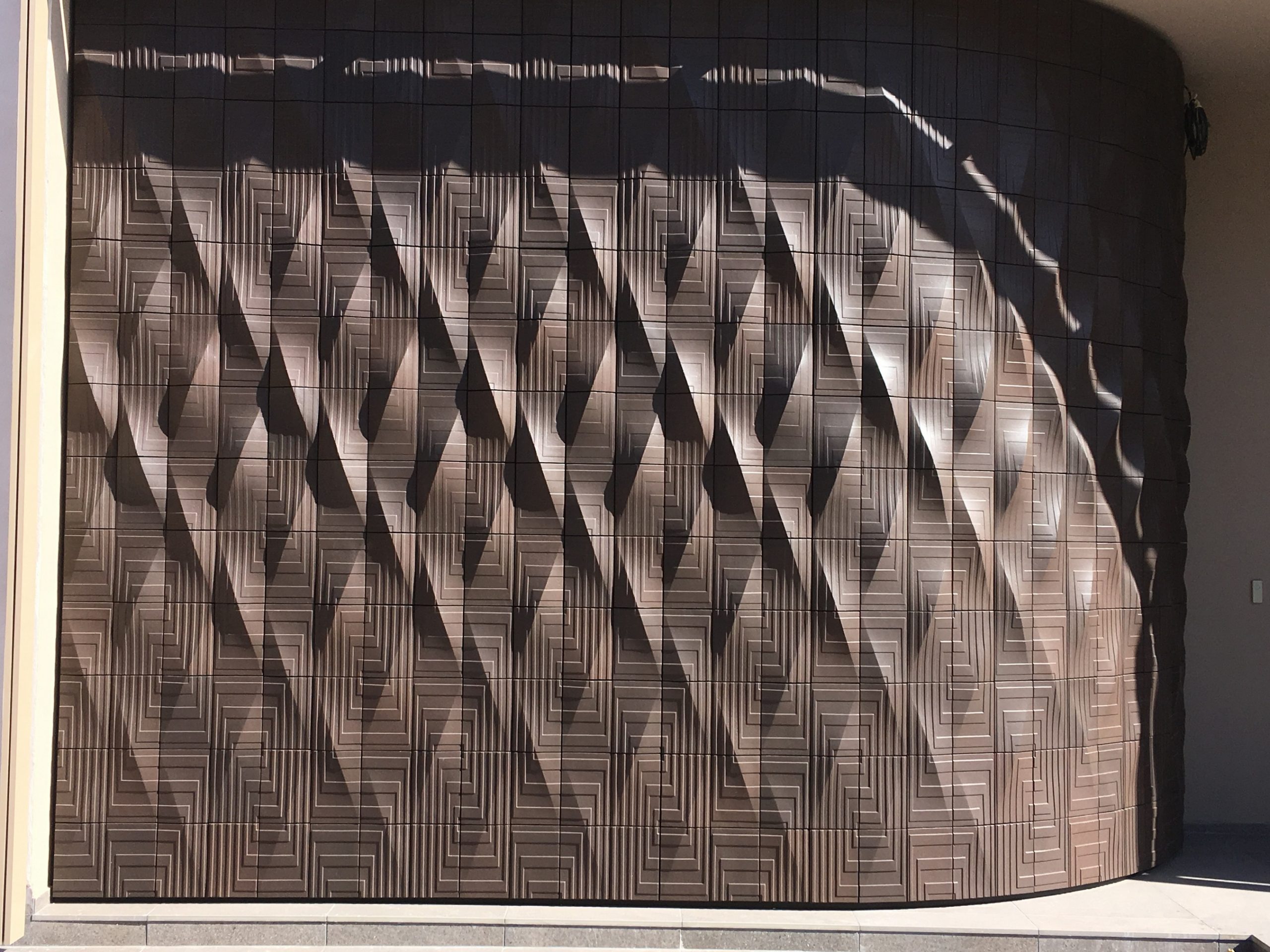 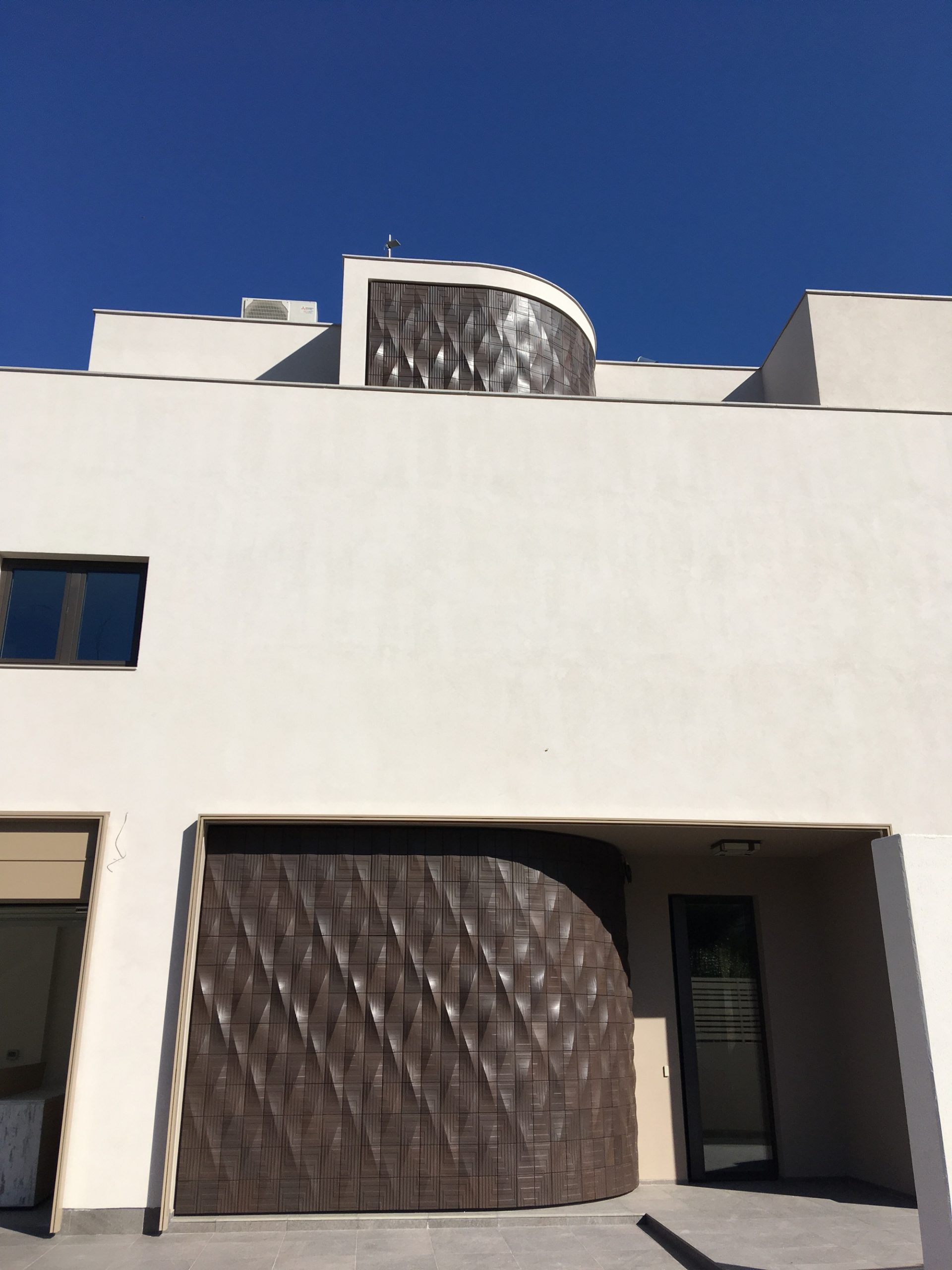 I am presenting two exterior sculptures – The White Waves and The Brown Wall – incorporated into the facade of the Privet Residence House, located in a suburb of Sofia, Bulgaria.

The White Waves has a total length of 74 feet and a height of 12 feet.
The Brown Wall consists of two parts and has a total area of 290 square feet.

Both sculptures are built from handmade, hollow glazed stoneware ceramic modules. The ceramic elements are mounted on the facade by means of a metal structure of aluminum, hot galvanized steel, and stainless steel.

The building is entirely turned towards the courtyard (East), and the façade that is visible from the street (North and West) presents as the face of the house with the official entrance.
I was invited for this project when the house had already been constructed.
The goal was to create two independent sculptural accents for the facade turned towards the street, which would enrich and “break up” the monotonous shape of the building.
The one called The White Waves aims to partially conceal the openings (North and West) of the loggia on the second floor, which serves as a laundry facility.
Instead of making separate partitioned of structures for the two openings of the loggia, I decided to design an uninterrupted structure, similar to lace, “wrapped” around the building, which would justify the sharp corner (71 degrees). I purposefully intended the structure to be non-orthogonal in shape and silhouette in order to counter the general impression of the building.
The other sculptural accent-wall relief, The Brown Wall, is meant to form the official entrance and to emphasize the vertical cylindrical space running through the house to the last floor, which requires the relief to be in two parts.

I was entirely responsible for the conceptual and operational planning, using the services of the Altronics Light studio for 3D computer visualization of the project.
I developed all of the models for the ceramic modules. The White Waves consists of 30 different modules, and The Brown Wall, of 20.
All of the ceramic elements for the project were produced by Taneva Ceramic.
I designed the adjustable metal structures with which the sculptures are mounted to the building. The metal structures consist of hot-galvanized steel frames, laser-cut powder-coated aluminum panels, and prefabricated stainless parts. These were produced in the Ananiev Metal Shop under my supervision and coordination.
The assembly of the two sculptures and their installation on the facade of the building was carried out by Prahov Art Studio under my supervision and coordination