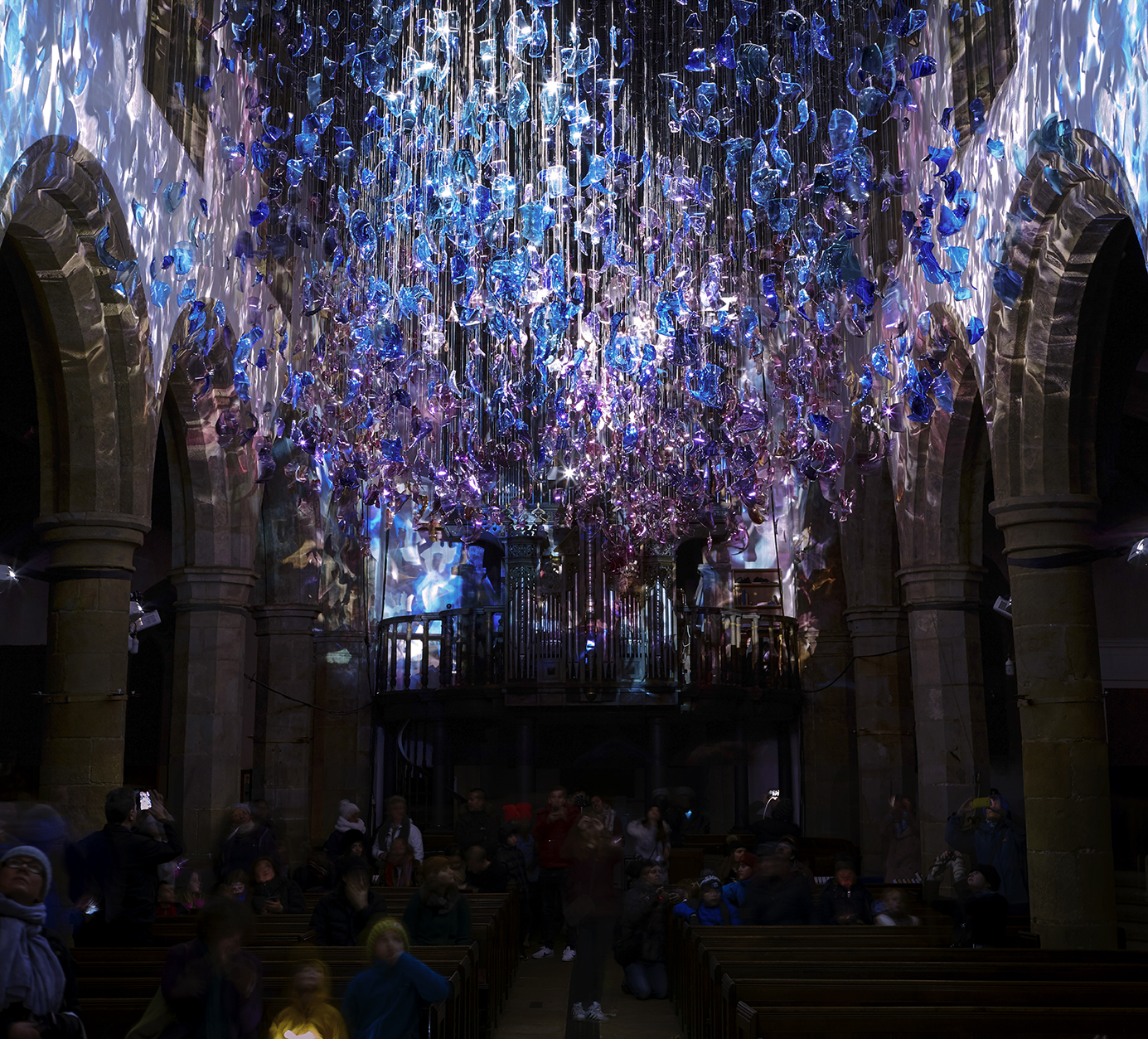 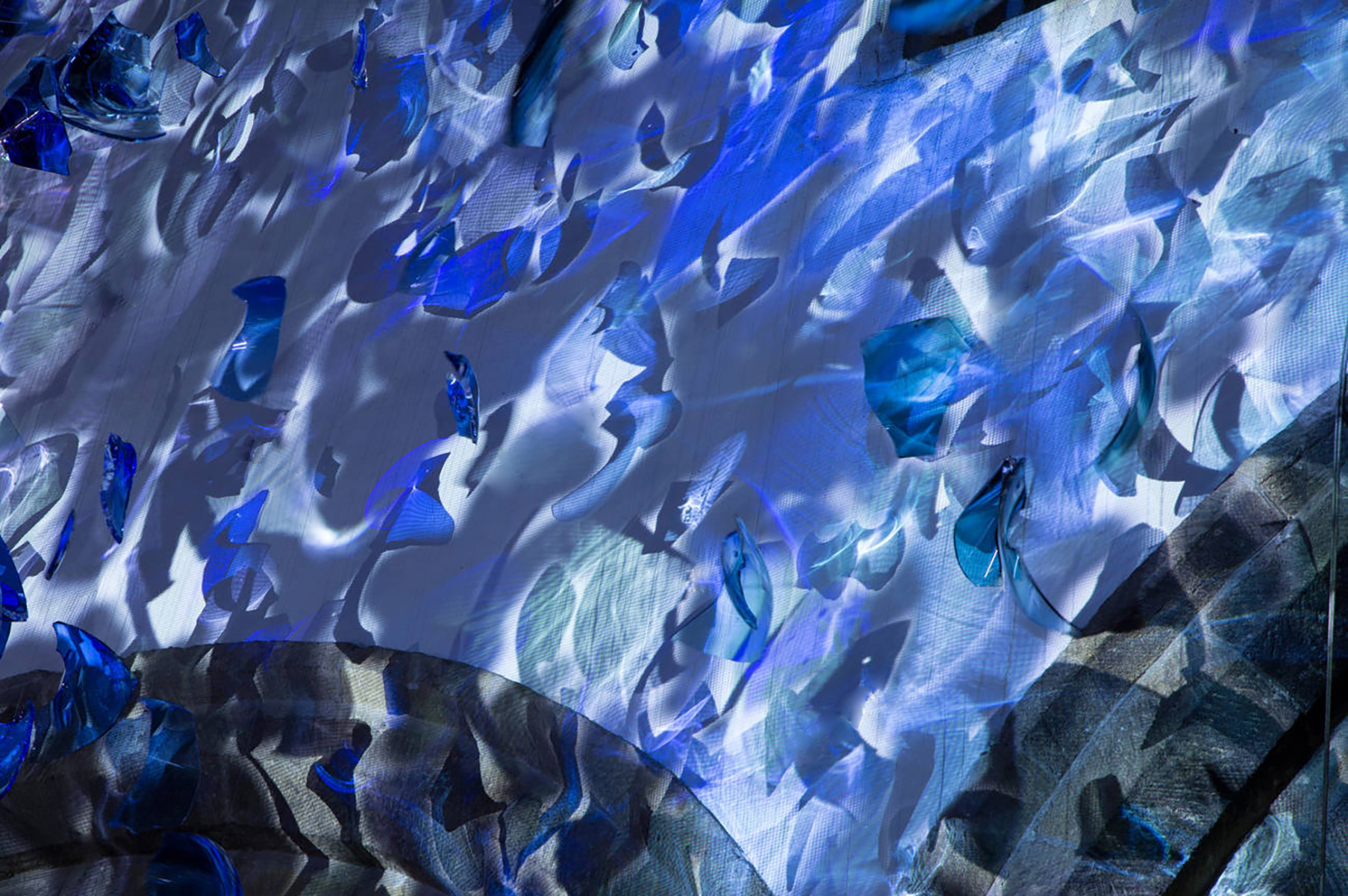 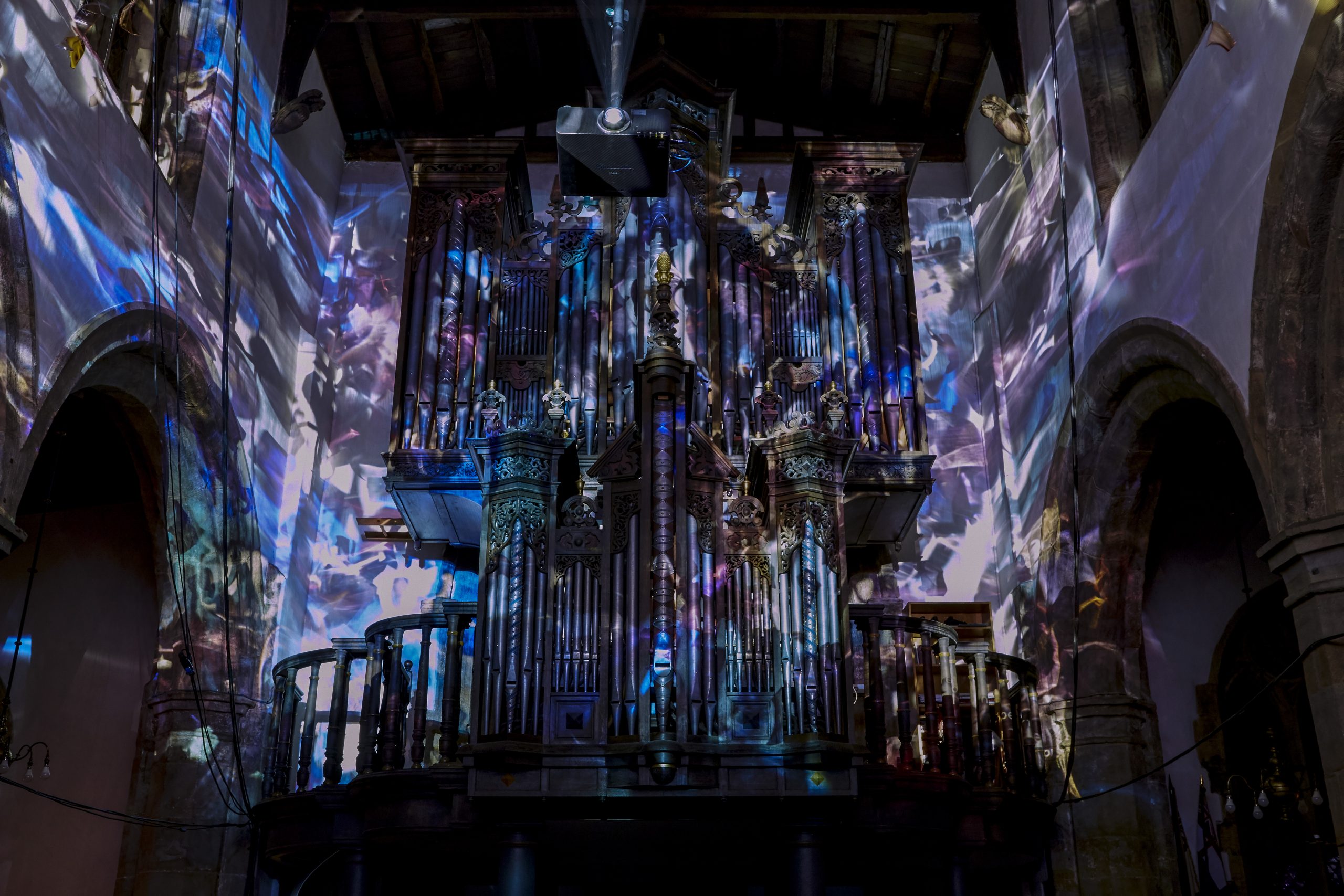 The medieval church of St Oswald’s, with iconic William Morris stained glass windows, provided the setting for this installation, which reflects on contemporary cosmology, evoking thought about how matter evolved, how we model or simulate knowledge and what it means to be conscious. Thousands of hand-blown coloured glass fragments were suspended in specific coordinates according to a spectrum of spherical sections derived from the Cosmic Microwave Background Radiation, thereby depicting the ‘scattering of light’ and stages of cosmic evolution from the very early stages of the universe just after the Big Bang. White light was painted through each coloured fragment which, allowed to turn naturally on their axis, filled the church with ever-changing spectral optical projections. As more visitors filled the church, the piece became more alive with kinetic movement caused by bodily movement, heat and breath.

The concept aimed to create an immersive environment for audiences to reflect on the big questions of life, light and the universe and create a new form of dialogue between contemporary science and spiritual tradition. Developed with assistance from the Institute of Computational Cosmology, the installation reflected on contemporary cosmology and simulation technologies, evoking thought about our place in the universe in the context of a functioning church. By mapping the birth of light in the universe, the work looks at the meaning of computational simulation, projecting light through the glass in order to introduce the aspect of consciousness into the model and inviting the question: “What Matters?”.

Siting the work within the iconic church of St Oswalds, 50m down the road from the Institute of Computational Cosmology, provided the work with a context that allowed scientific and religious outlooks to be in conversation with one another in a new and immersive way.

The work was commissioned by Artichoke Trust as part of Lumiere Durham, 2017. After a site visit to the space with the curator and an initial conceptual discussion, we were introduced to the Institute for Computational Cosmology. A deep dive into their data and visuals of cosmic evolution provided us with a model of the cosmic microwave background radiation, which we then developed with project engineers Cundall to translate into a 3D form, depicting colour variation and spatial coordinates. We then worked closely with glassblowers to blow a number of bubbles, which were fragmented - expressing the expansion model of the ‘Big Bang’. Working with volunteers, each fragment was then drilled and attached with a specified length of suspension cabling and given a coordinate relating to its location in the church. On site, a truss and gridded net was set up by Unusual Rigging and volunteers helped to attach each glass fragment to its specific coordinate on the grid. The glass was then hoisted into position. AV technicians, Art AV, set up a series of projectors, and the artists used these to 'paint' white light so that it projected directly through each piece of glass and refracted and rebounded light throughout the Church.

Overall the artwork occupies the interface between science, technology, spirituality and art - being a precise manifestation of the coming together of these disciplines around the common medium: the substance of light.