We Will Walk Right Up to the Sun - CODAworx 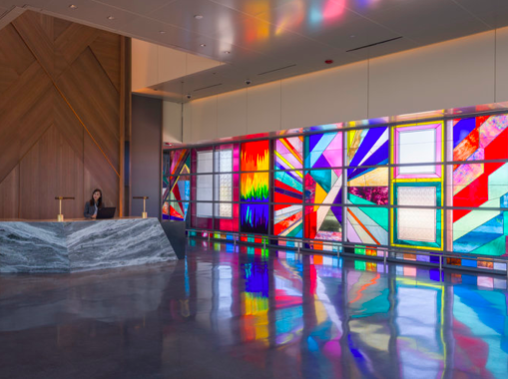 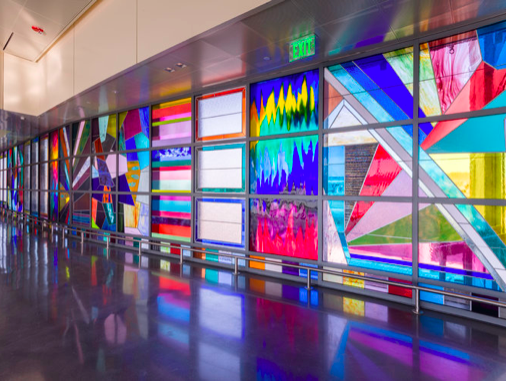 Sarah Cain is an abstract painter who had never worked in glass before this project so she had a lot of questions before the project even started. She was deeply impressed with the variety of glass we had to choose from not only in our own inventory, but also by seeing what was available from the sample boxes we have of our suppliers. She choose dozens of colors to work with through out the project and her selections became bolder as she became more familiar with the material. Initially she was not interested in fused glass when we started, but as she spent time in our studio she realized that she could custom design her own transitions of color that in essence looked like her paintings. Rather than working with the more common material of lead came we introduced Sarah to zinc came to assemble her panels because she liked certain aspects of traditional glass and wanted that element of structure in her wall of glass. By using zinc rather than lead we eliminated the fear of lead in a public space and the stiffer metal makes for cleaner straight lines, which we prevalent in her design. She was also pleased to find out that zinc was the material that Frank Lloyd Wright used in his windows, which is where her initial interest in glass stemmed from.

We worked closely with Sarah, and the SFO Transport Authority to develop a successful installation. We had several meetings with their team on the phone as well as a number of site visits to coordinate the overall physical design of the glass. Most important was identifying the type of frame that was used (Kawneer), how the glass would be installed in the frame behind the protective glass and what allowances we had to work with. During the project we were asked to add a number of panels to the original number and three of the panels changed sizes to incorporate a door as well as some structural work. The ten foot high sections were broken up into four panels for installation and safety purposes. While initially we were not contracted to install the panels, we did send a team to the site to install the panels due to delays in construction and a lack of man power to get the project installed on site on time. We completed the panels ahead of schedule and stored the panels for the owner until it was safe for them to be received on-site.