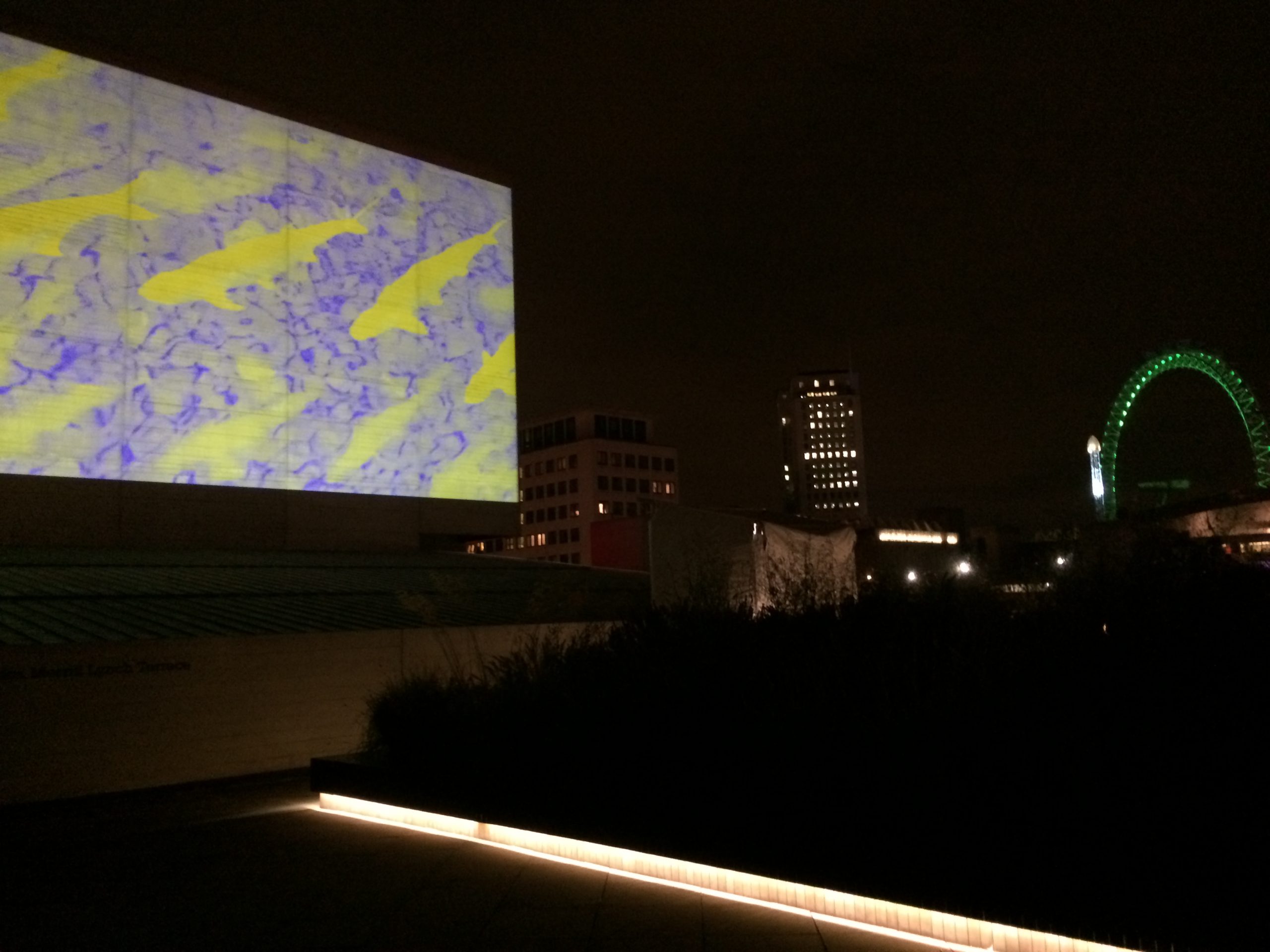 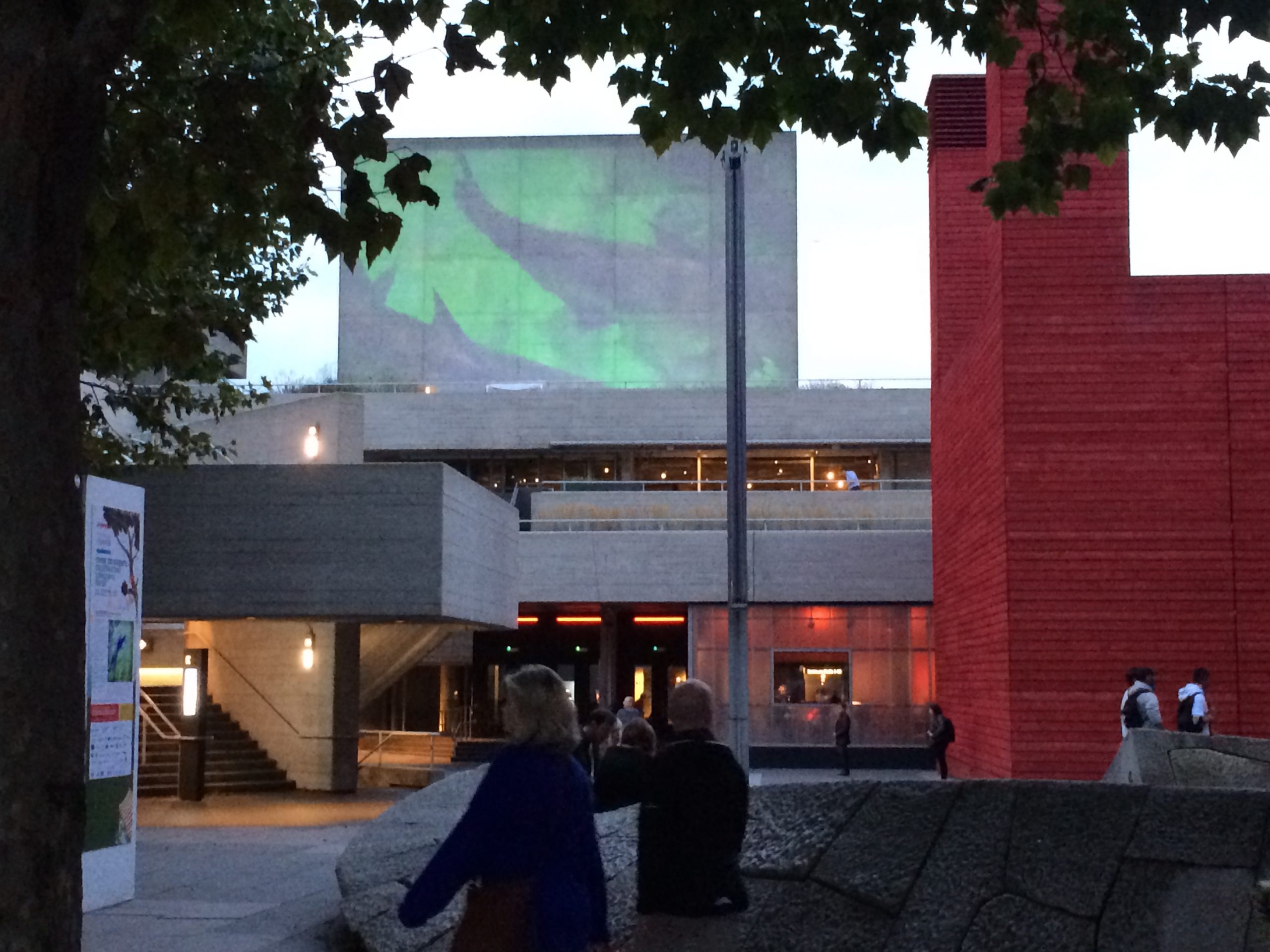 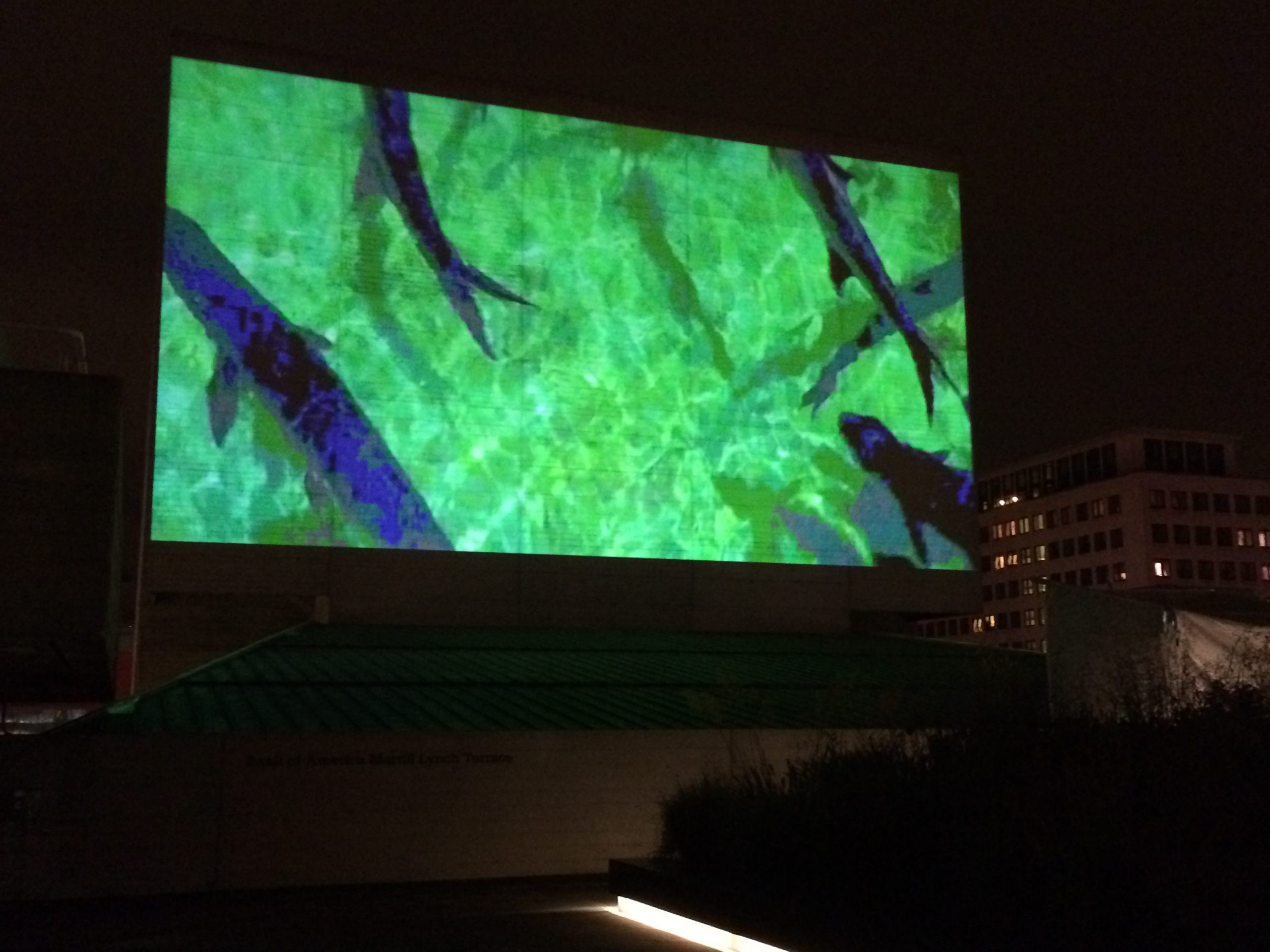 WATERSHED was just inaugurated as a large-scale public art projection on the face of London’s National Theater on the Thames in September of 2015. It was appropriate for London because as another waterfront city, London is a city in a country, which is currently confronting major flooding problems as a result of climate change. As the tides and temperatures of the Thames continue to rise, Londoners are confronted with questions of how best to protect themselves from flooding.

WATERSHED brings the natural world into urban public spaces by projecting large-scale images and sounds of fish and flooding water into the surroundings. Hypnotic imagery of fish and flooding were projected both onto the face of the fly tower of the National Theatre. The large-scale projection addresses climate change through visual seduction, inviting people to learn about global warming as they watch mesmerizing images of colorful fish. Millions of people were able to see the giant fish on the skyline of London for six nights.
I see WATERSHED as a new and different kind of public art/public space initiative. It highlights how climate change is impacting people’s lives in intimate ways, affecting where we can live, what we can eat, and our physical and emotional health. At the same time, this work serves communities in a unique way by providing an engaging and encompassing virtual seascape where viewers are brought into dialogue with each other and their surroundings as well as with the work itself. By transforming the urban landscape into a virtual sea, WATERSHED has entered into the current dialogue about our need for better infrastructure and catalyzes community awareness of the city’s relationship to water.

This was commissioned for the Totally Thames Festival. As the artist I was responsible for all aspects of the work except for the installation for which the National Theater and the Thames Festival were responsible. The fish are the Colombian Piracuru fish, a nearly extinct fish of the Amazon which I went to film. In addition to the filming, I also did the editing. This work is site specific. However, it has had other iterations in interiors and outdoor spaces including the New Museum in 2013 as part of the Ideas City Festival and most recently in April 2016 as a full lobby installation of the Customs House on Ellis Island

I see this work as a vehicle of communication for scientists to use as a moving billboard platform to get out "the message". My ultimate goal is to have this work travel to other waterfront cities and to collaborate with scientists to run text with data about climate change through the moving images. It has been accepted as a projection for NYC at a yet undisclosed location and I seeking sponsorship currently for it to be in situ for a minimum of two weeks