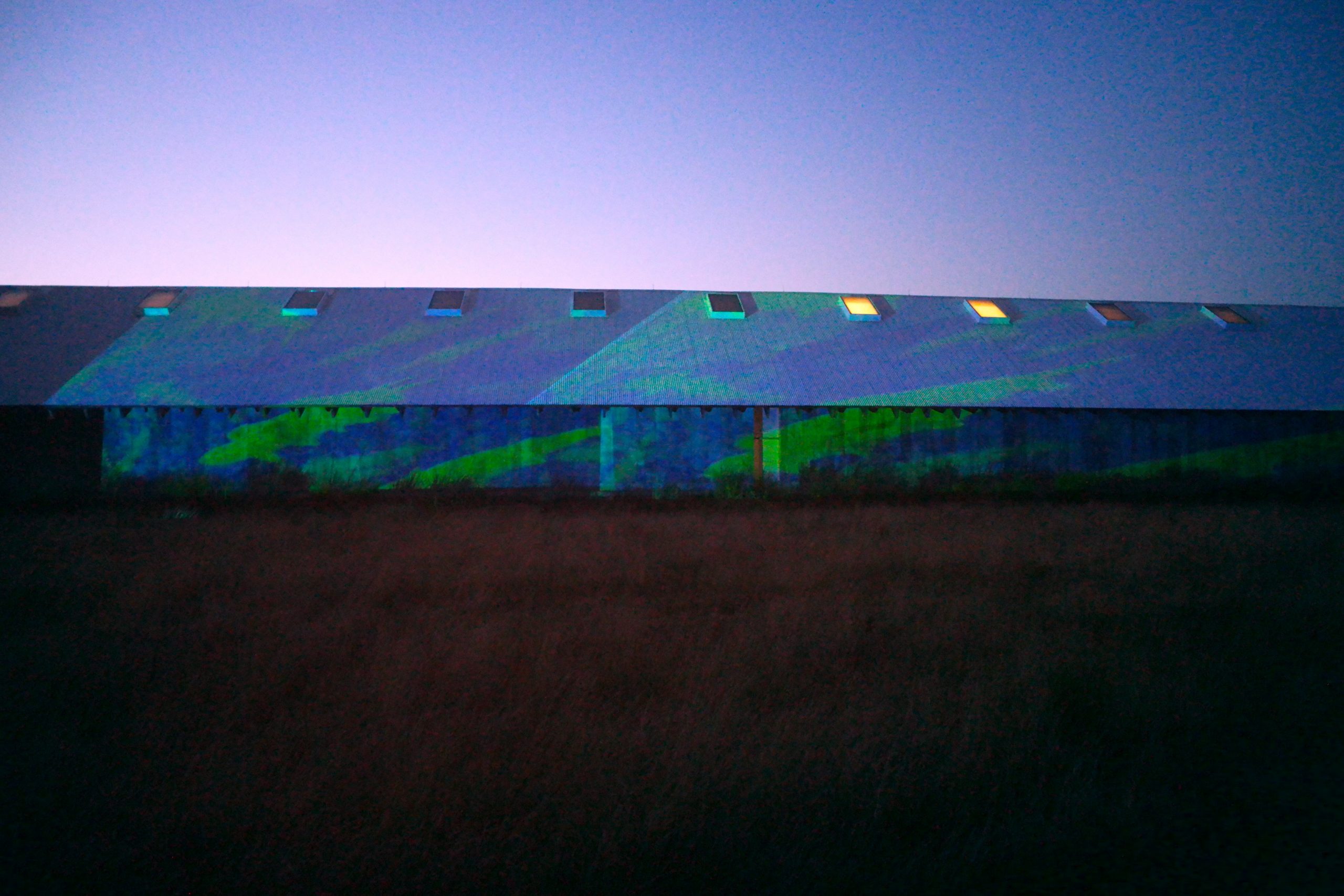 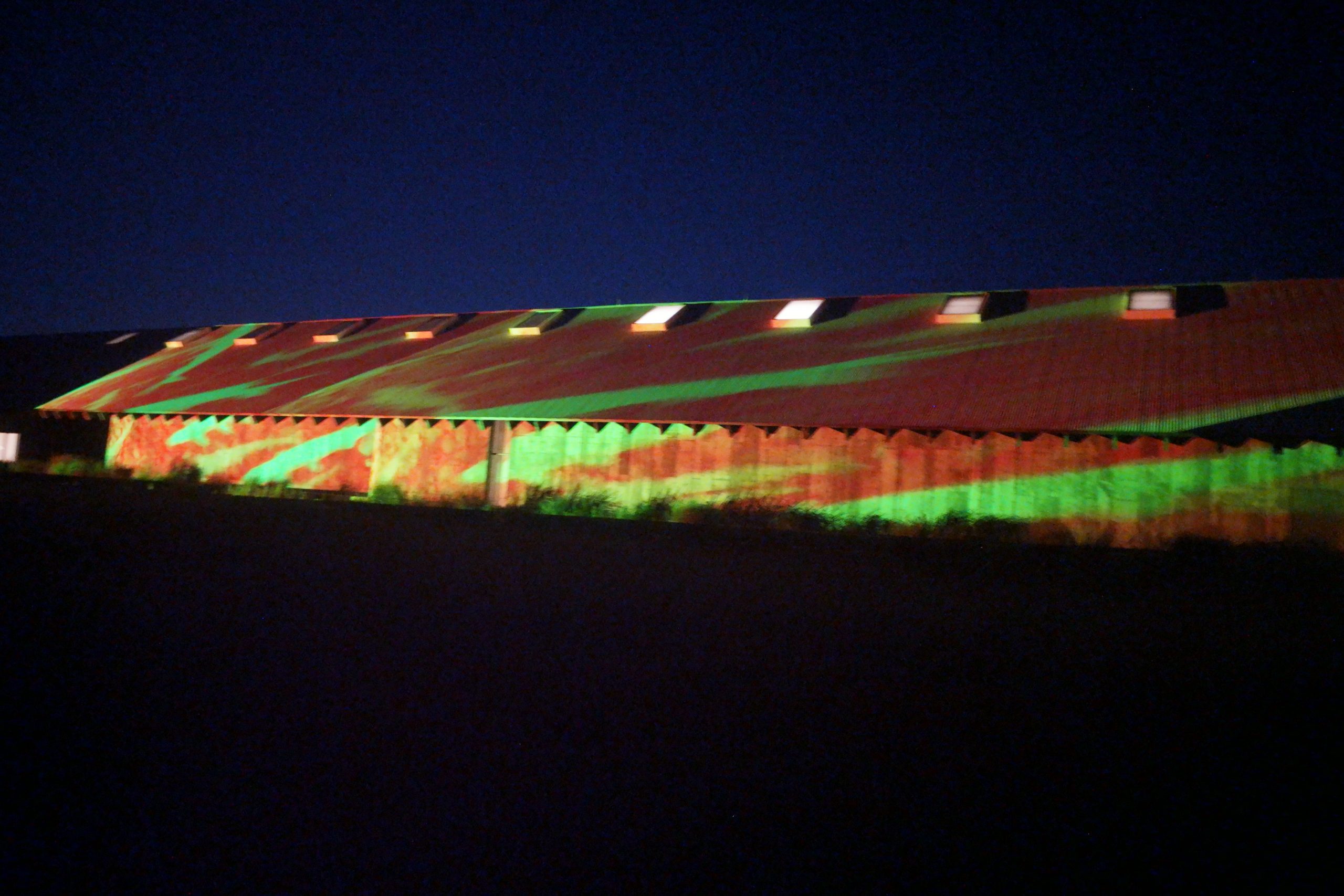 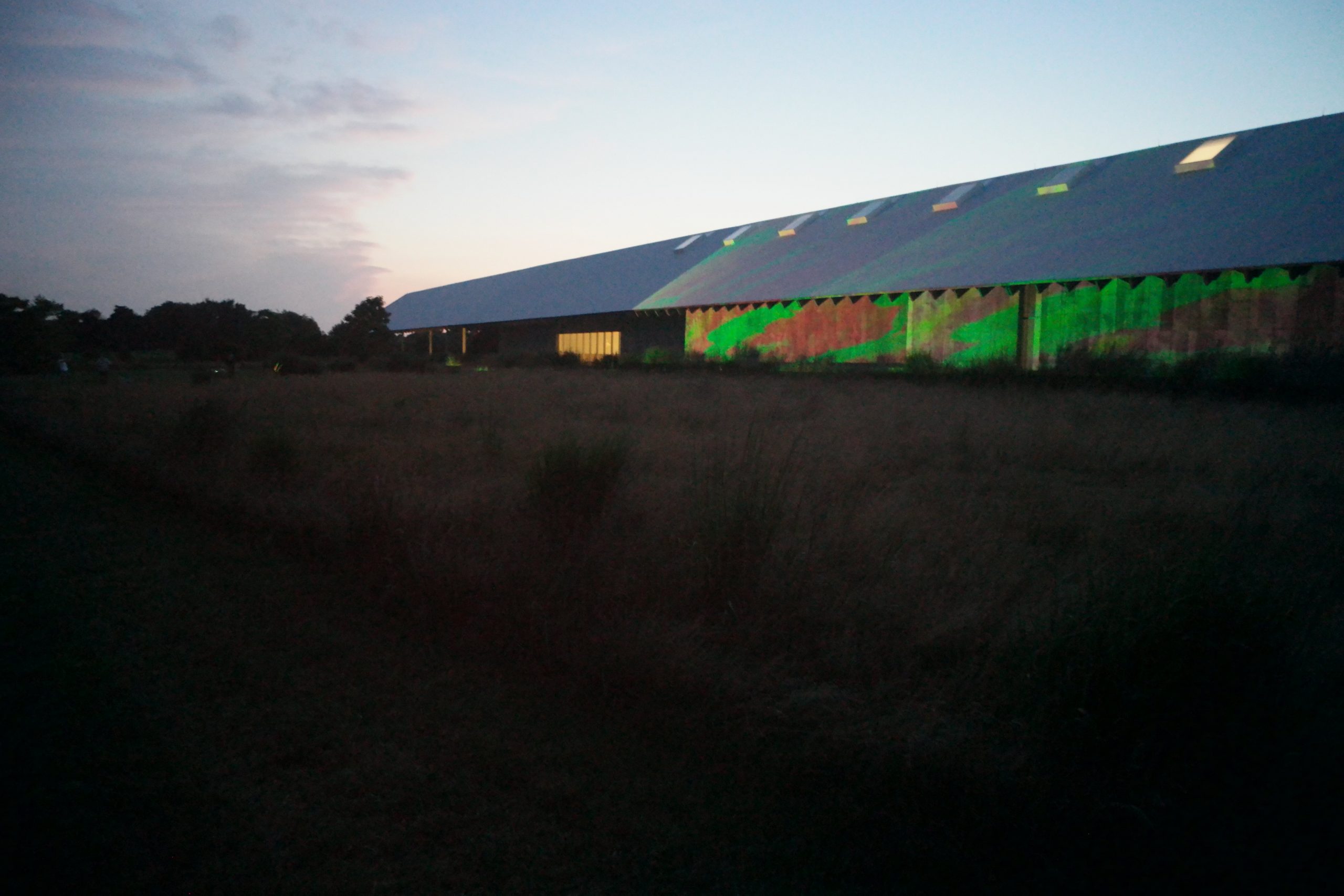 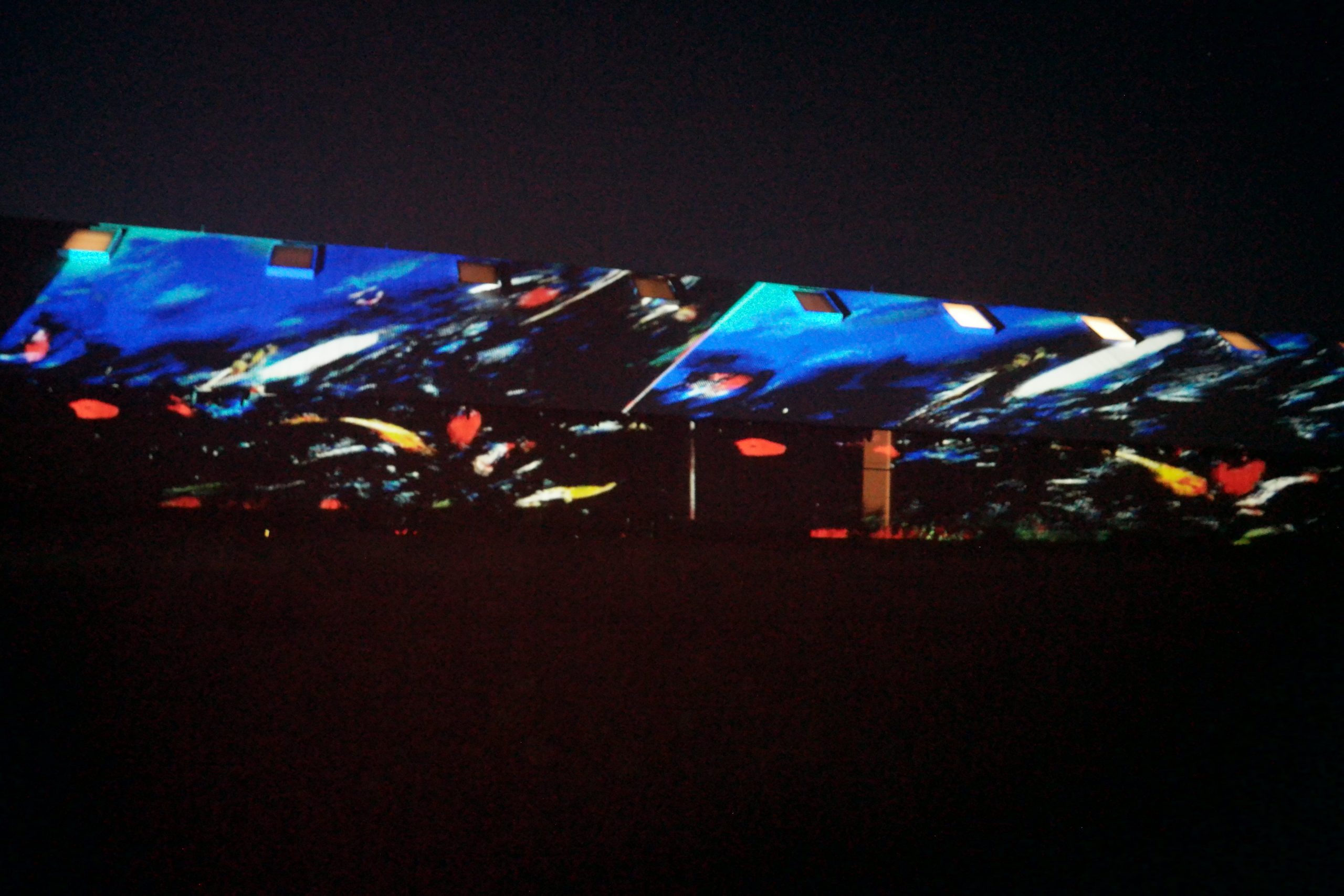 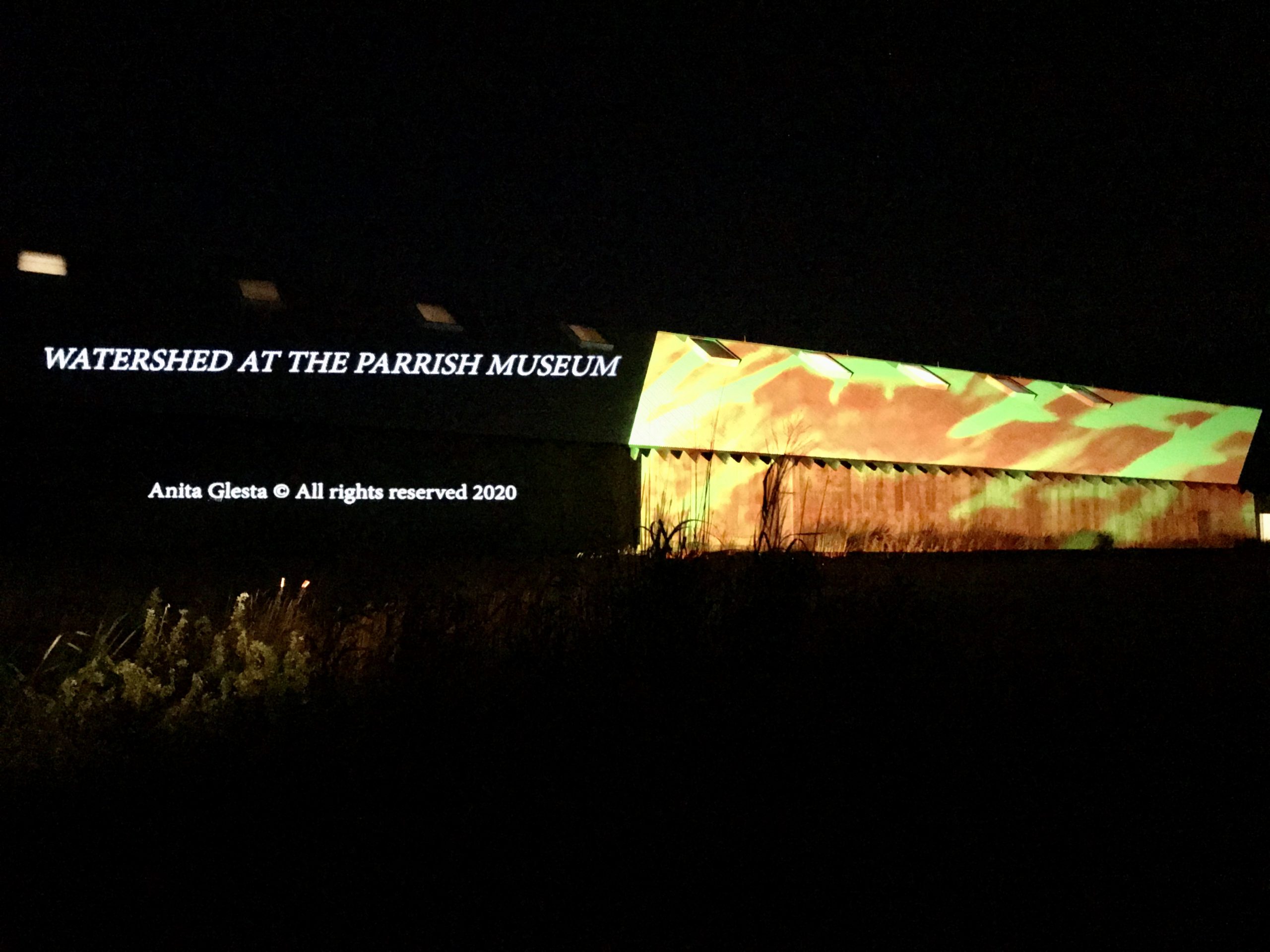 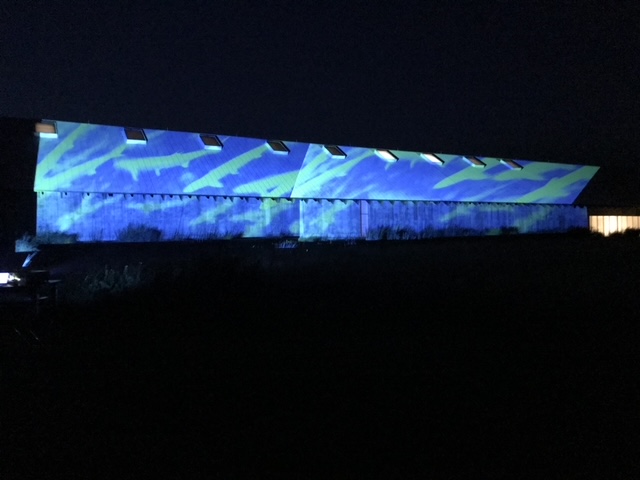 WATERSHED is a site specific immersive public art projection that has been featured in different waterfront cities throughout the world. Its scale transforms the iconic Herzog and Mueron Museum into an ocean of fish. Fish become both a symbolic metaphor and a sobering reminder about dwindling marine life on our planet. Siting this work on the architectural structure highlights the relationship of this building with the shoreline of the Long Island peninsula. Because this structure is inspired by the land and the sky of the 14 acre property, WATERSHED enters the dialogue by integrating the other elements, water and the marine life which is central to the area.
The fish that swim in WATERSHED are the Pirucuru species of South America, a species that were once near extinction in the Amazon that are now returning to the river. The other fish featured in the video are Carp, currently considered an invasive species in North American rivers and, because this work is now installed in Long Island, I have incorporated native sea bass which are a native species.

WATERSHED highlights both the compelling architecture onto which it is projected and the environment where it is sited. Fish become both a symbolic metaphor and a sobering reminder about dwindling marine life on our planet.
By transiting this work throughout the world and locating it at key points along waterfronts, I hope to establish connections about our precarious relationship with the ocean and the crisis we face with sea level rise.
When this work is installed in its various iterations, I always take the opportunity to raise awareness by organizing panels that engage community awareness. In Red Hook Bklyn in 2017, WATERSHED was projected on an 80’ sidewalk, a site that had been underwater during Hurricane Sandy. During the installation I organized a panel of community leaders and urban planners and included residents to participate in a round table discussion about how to intervene with the lingering issues five years after the flooding.
At the Parrish Art Museum, the Curator organized a weekend event that included a film series about sea level rise while WATERSHED was installed. My goal for this work is to continue its trajectory as a moving “semaphore” about the impact and imminent danger we face with sea level rise. Integrating the work into a compelling structure ad

Commissioned by the Curator, Corinne Erni of the Parrish Art Museum in Southhampton, NY, WATERSHED was created specifically for this Museum’s to integrate with the compelling structure. Ms. Erni understood that this work would promote awareness of Long Island’s precarious relationship with the surrounding ocean whose location is practically at the doorstep. As the creator of the video, I saw the iconic Herzog and Meuron building as a beautiful and poignant structure to integrate my work with the vision of the architects for whom the design’s incorporation of the surrounding environment was paramount.
By transforming the urban landscape into a virtual sea, WATERSHED has entered the current dialogue about our need for better infrastructural support in waterfront cities. As an interactive work this has been compelling for those who experience it heightening awareness through a highly colored and saturated visceral experience.
In September 2015, WATERSHED was projected on the face of the Royal National Theater where millions of people were able to see the giant fish on the skyline of London for six nights. In 2017, WATERSHED was an 80’ projection on the sidewalk in front of the Brooklyn Public Library to commemorate the fifth anniversary of Super Storm Sandy.