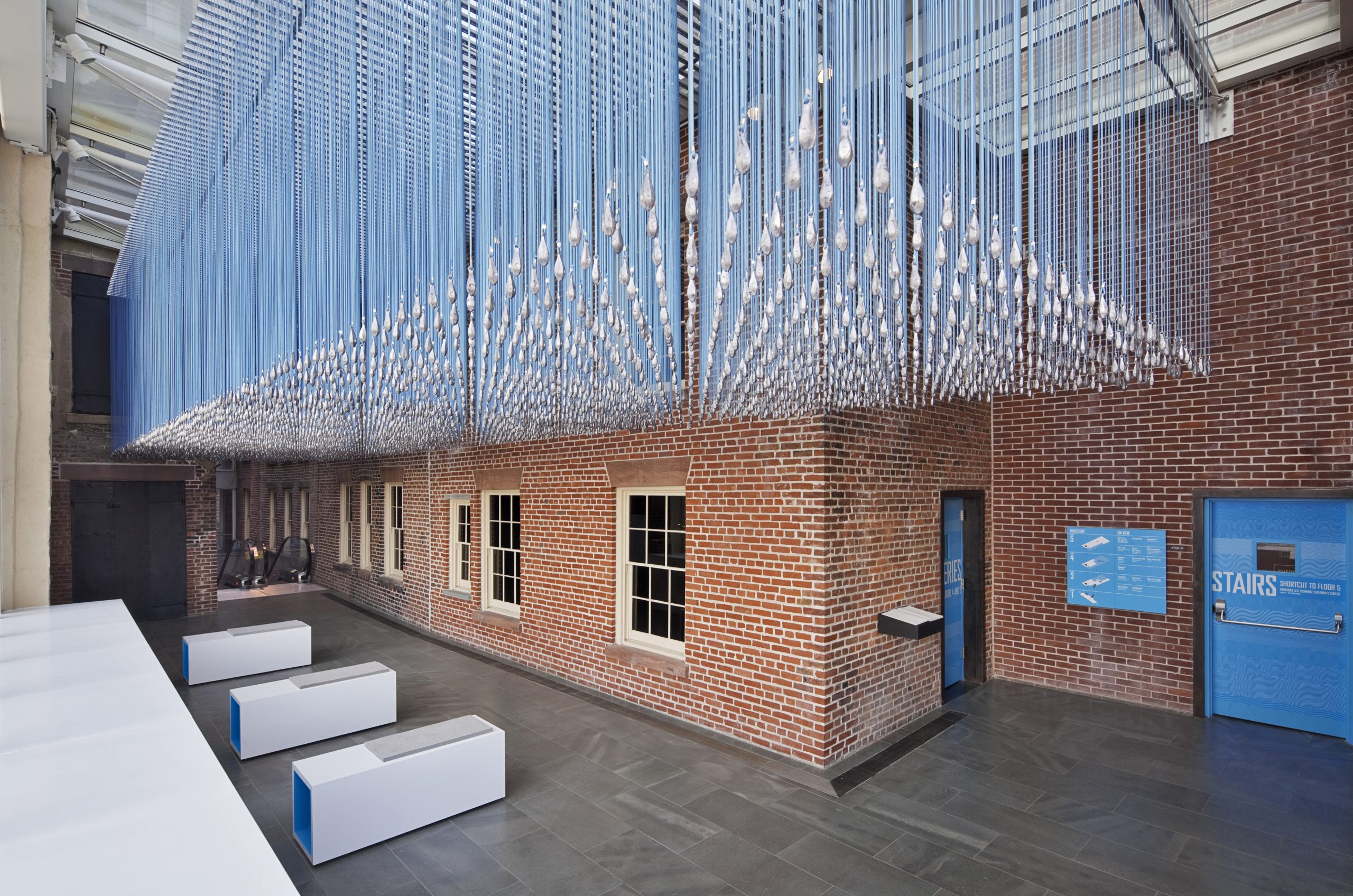 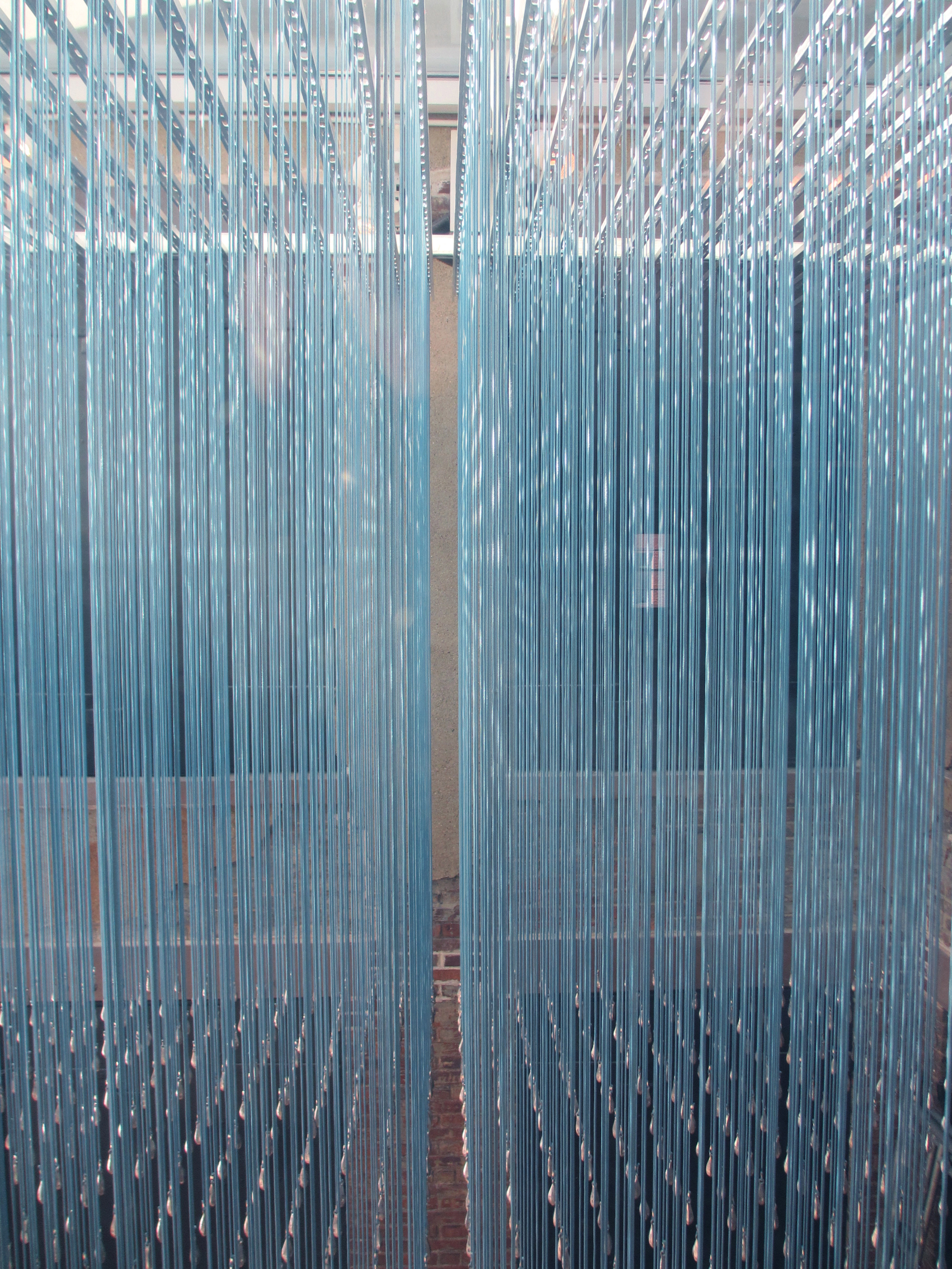 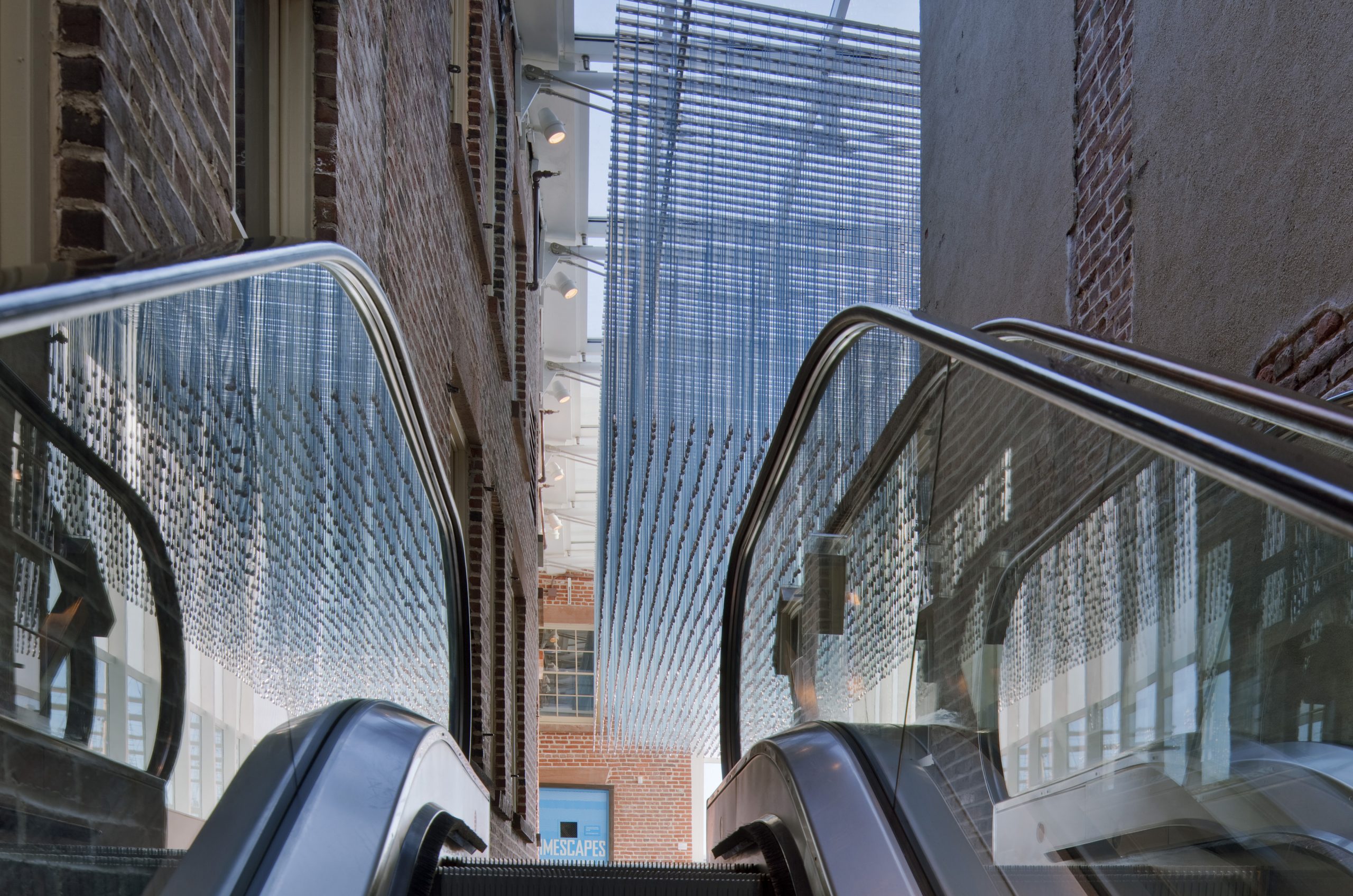 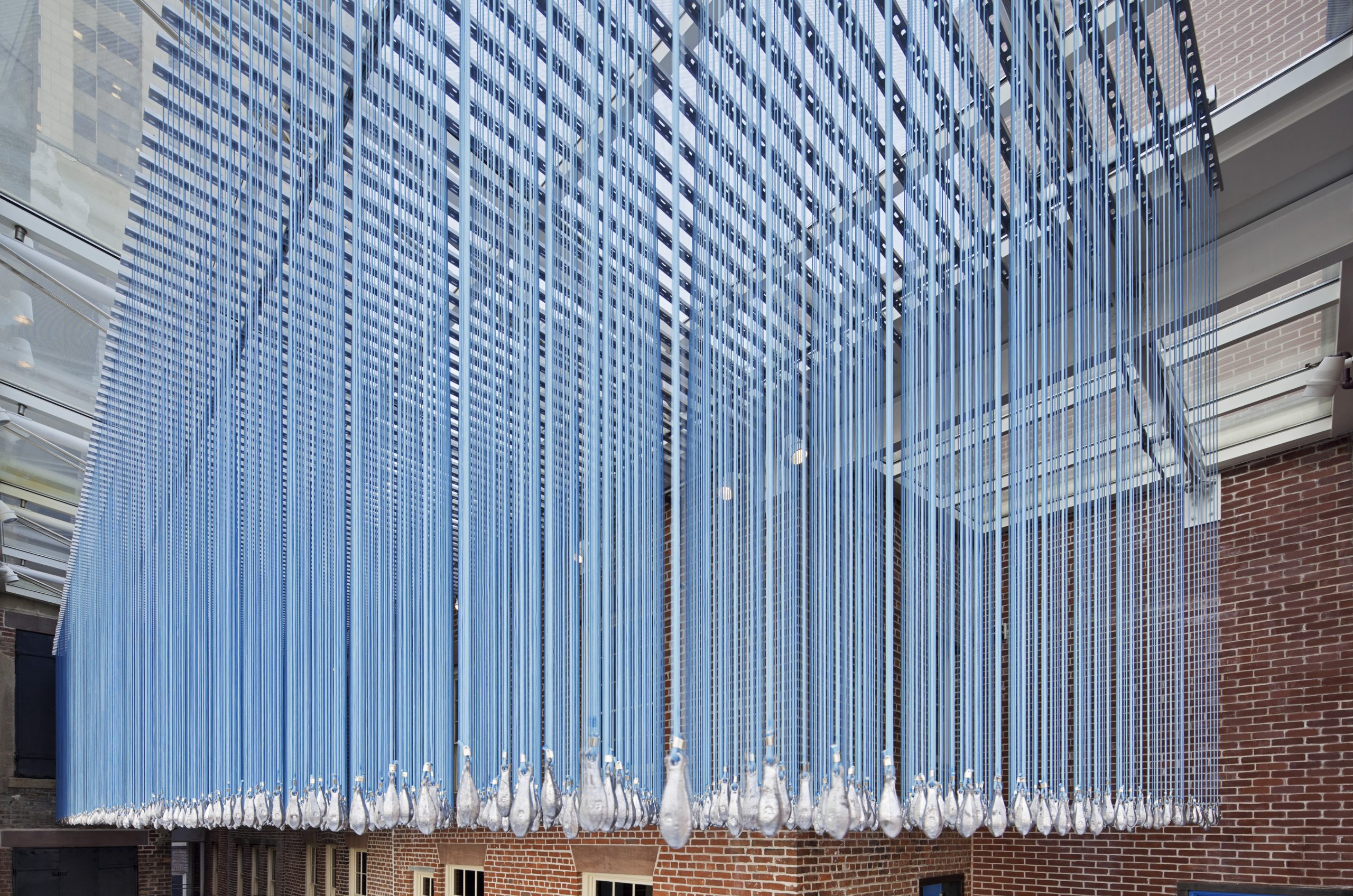 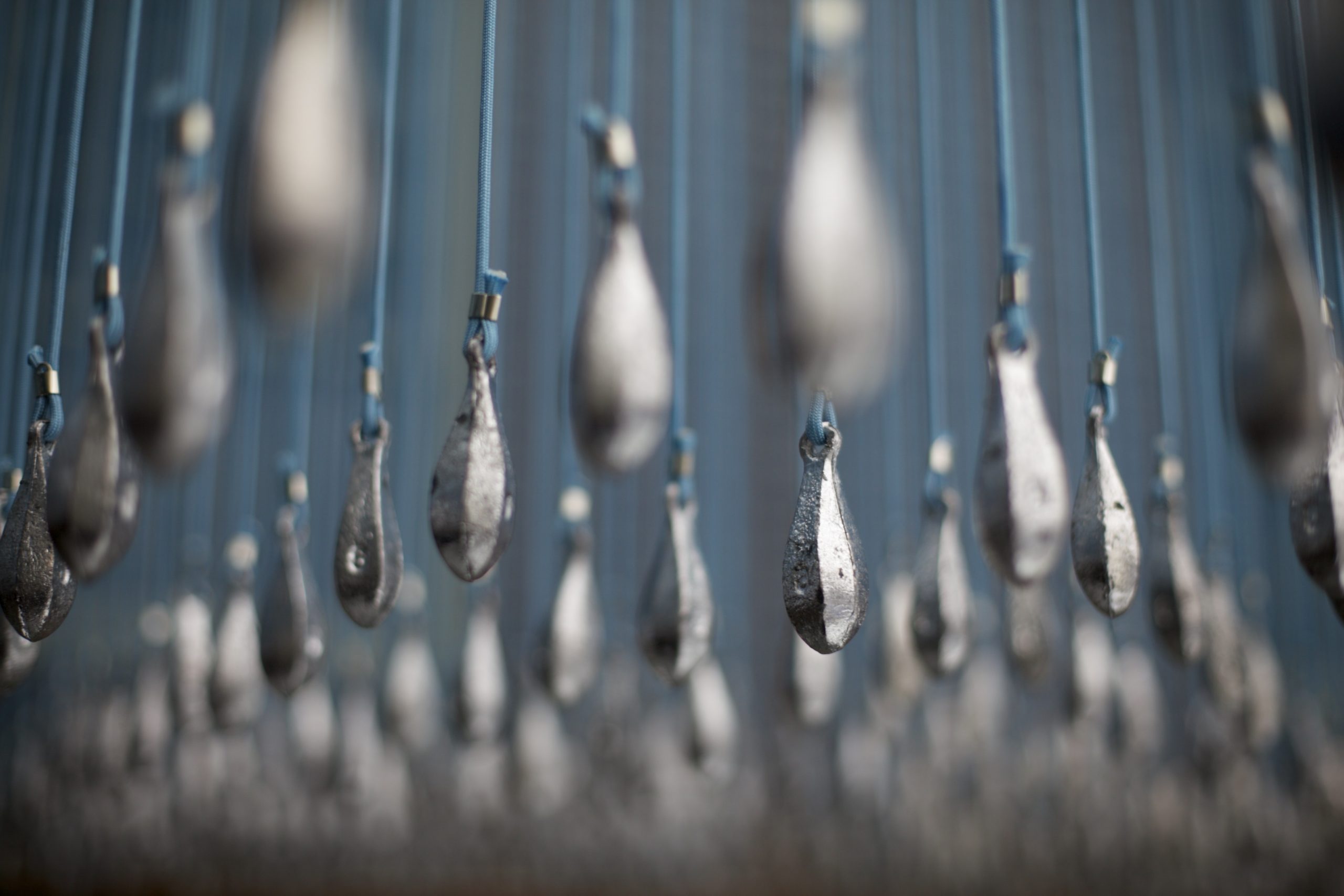 Located within the historic shell of the South Street Seaport Museum in New York City, this installation embraces the toughness the building’s warehouse vernacular while also providing a playful affect. “Waterline” reads as a floating body of water, undulating gently overhead. Acting also as a sunscreen to the south light, it reduces the voluminous scale of the lobby space. The overall dimension of the artwork is approximately 42’ long and 10‘ wide, hanging 8’-4” feet above the floor.

The Seaport Museum was abandoned for a number of years. We were asked to renovate the public spaces in order to give the tired building a fresh new look. The biggest challenges were the low budget and accelerated schedule (design and construction took place within a three month period). We felt strongly that a site-specific artwork would show a commitment to the longevity of the Museum.

The architectural renovation uses cyan blue as a bright new graphic to reference the seaport location and distinguish old and new. The renovation takes a bold stance, reducing design concepts to their essential aspects. Composed of a small number of repeated elements, Waterline fits with this minimal and modern aesthetic but also imbues it with a sense of playfulness. The 4,032 fishing sinkers glimmer at the end of blue nylon paracord, telling a story of new and old.

Everything was hand assembled by a group of local art students and installed in less than a week, as the overall schedule for the completion of both design and construction was only three months. In order to accomplish this task we had to design a series of jigs and create a carefully orchestrated sequence of simple tasks that could be passed from one person to another. We installed a simple system of Unistrut angles to the existing superstructure of trusses and, in turn, hung the cord and sinkers from these trusses. The cord is on a perfect 5 ¾” spacing in each direction so that larger patterns emerge as you look up into or through the field of blue. This abstraction contributes to the water-like feeling of the sculpture.

The enthusiasm of the staff, consultants and design team was palpable and lead to a great deal of public outreach. Local press followed the progress carefully and all varieties of New Yorkers were engaged in the success of the museum.

Sometimes even simple materials and a hand-crafted artwork can have an effect that is greater than the sum of the parts. Although we did a few mockups and a series of design renderings, with such a short timeframe, the client had to take a leap of faith and allow us to proceed and trust that we could work out the details. That type of client is rare, but they are the perfect support for an artistic project for a grand public space.