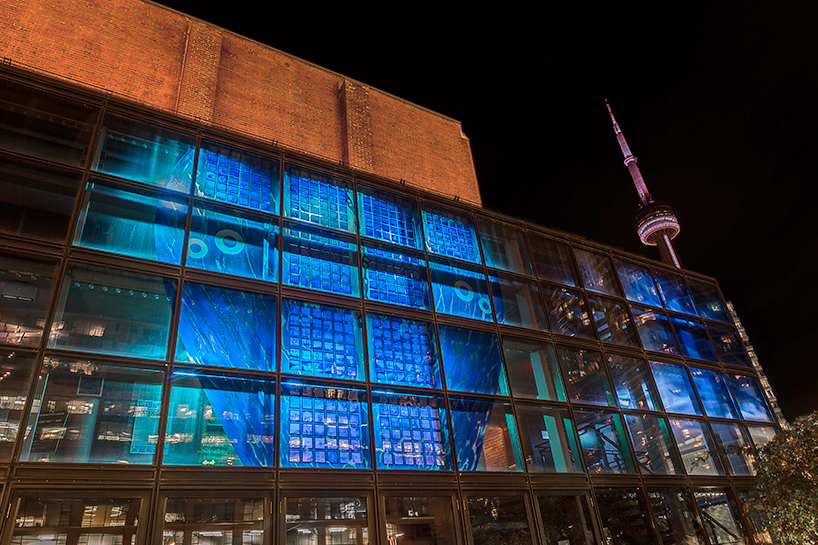 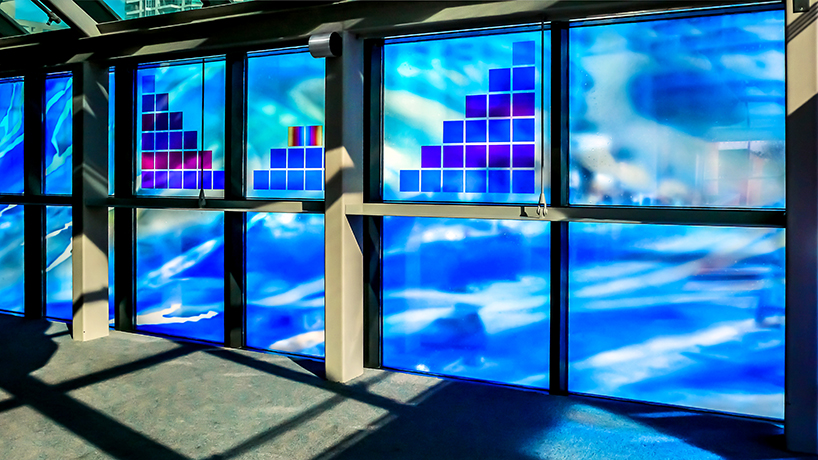 Harbourfront Centre Theatre has a brand new glass skin. The innovative glass envelope that replaced the old thermopanes is a transformation entitled “Waterglass” – an integrated art and solar installation that generates electricity for the site with embedded photovoltaic cells. “Waterglass” is a world first for integrating art glass and photovoltaics with heat mirror technology, bringing it to the highest insulation values possible for glass. Architectural glass designer Sarah Hall collaborated with Canadian engineers plus German and Austrian glass fabricators to create this project.

Harbourfront Centre Theatre was originally constructed in 1926 as a brick ice house where large blocks of ice intended for freight and cold storage were stored. In the 1980’s it was converted into a 416-seat theatre. As part of the recent renovation the theatre needed to retrofit the glass envelope and now has a sleek, three-story glass envelope that surrounds the entire north, east, and west sides of the facility, providing thermal insulation and electricity-generating windows. The glass installation generates electricity during daylight hours from the western canopy photovoltaics. At night the windows are lit by an array of LED’s.

“Waterglass” depicts the changing shoreline and history of Canada’s largest city. It includes 360 images of maps, wildlife, seasons, ecology and historic figures – from first nations to Olympic athletes. The façade is made of a series of painted and photographic images executed in painted and sandblasted glass that wraps the facade in a curtain of transparent blue imagery. Hundreds of embedded solar cells in the art glass façade convert sunlight into useable electricity for the theatre.

An international collaboration between me (the artist), environmental consultant, solar engineer and two major European glass fabricators brought this challenging project into reality. After preliminary meetings with Harbourfront staff, I began design work to encompass the three dimensional glass façade on the east, west and north sides of the building. Livio Nichilo, an electrical and solar engineer, determined the highest collection area for solar energy within the building. My water pattern of waves, mist and mysterious deep pools flowed through various sections of the façade while some leaving areas transparent for vision glass. For images of Lake Ontario and “lake culture”, I spent three months along the shoreline photographing the seasons, wildlife and light fall on the lake. At the Toronto Archives, I went through historical photos selecting images to include in the story of the Lake. Once the design was finalized, I collaborated with Jan Peters at Glasmalerei Peters GmbH in Germany to fabricate my painted and screen-printed art glass panels. The fired and tempered art glass was transported to Mayer Glastechnik GmbH in Austria for a further integration of heat mirror technology and the embedded solar array.

This is art glass with an R-20 insulation value! The retrofit significantly reduced the building’s energy consumption, carbon production and cost of operation. The transformation of the Harbourfront Centre Theatre window walls provides a model collaboration of technology, commitment to environmental sustainability and artistic creativity.