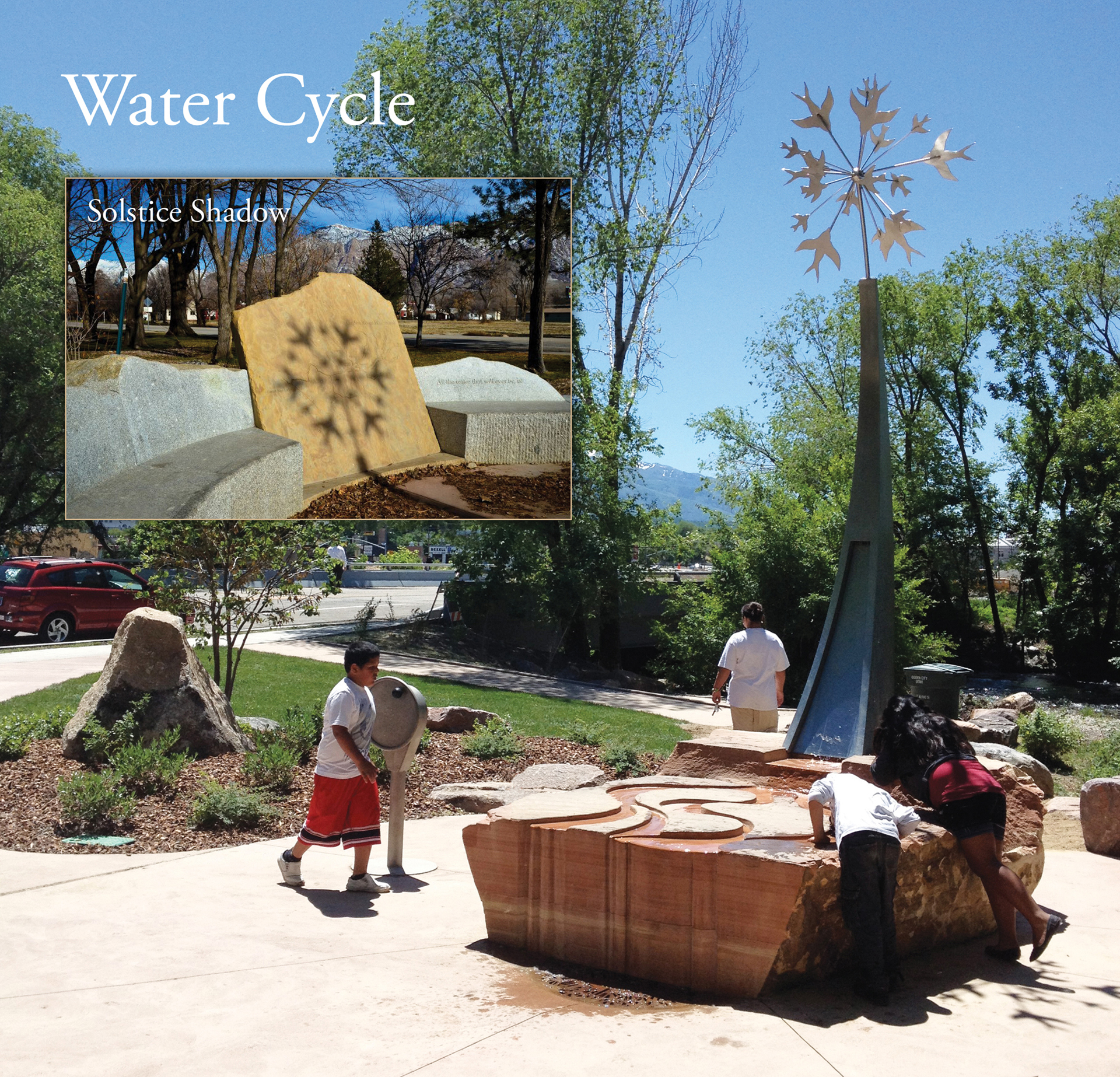 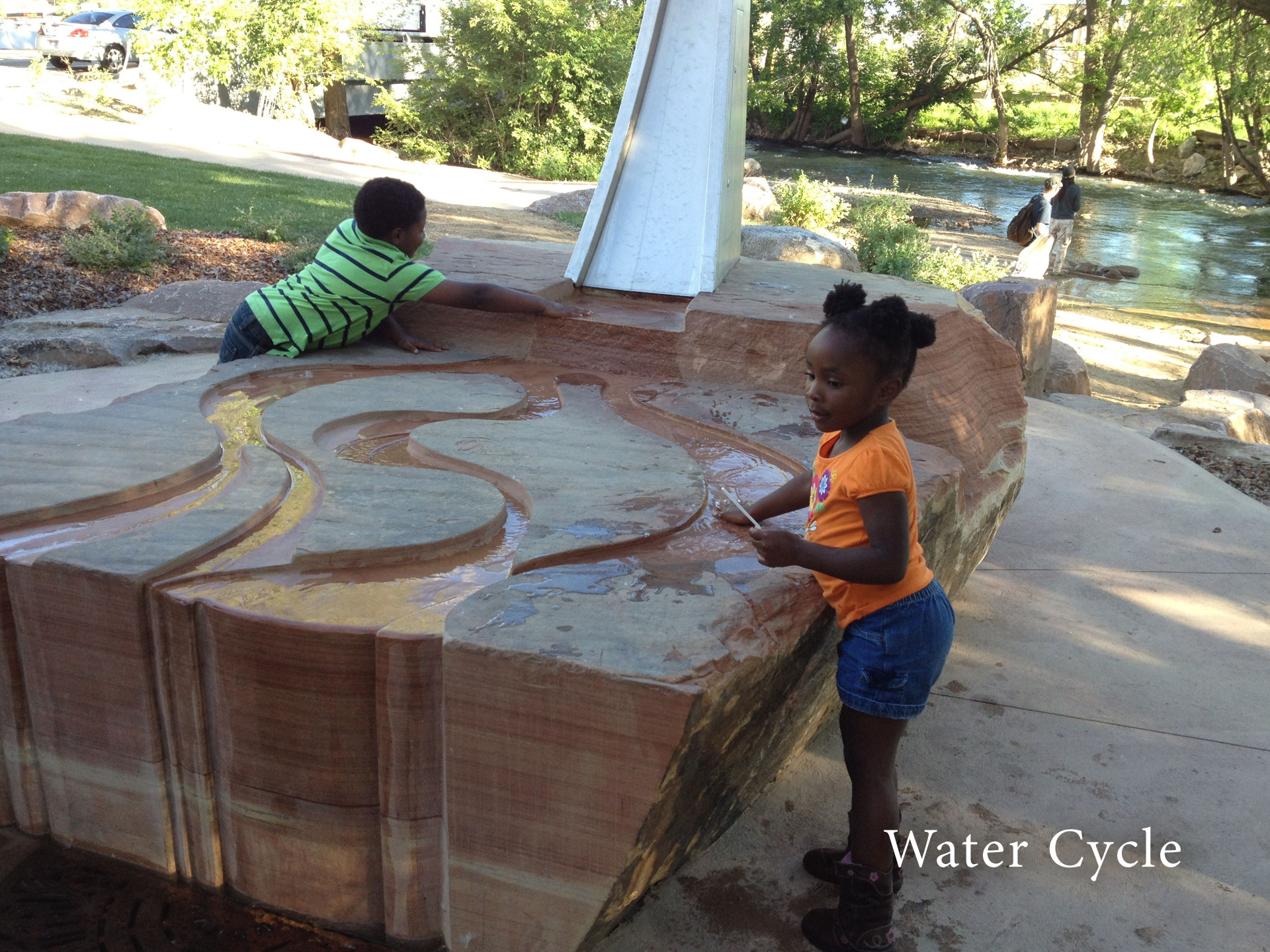 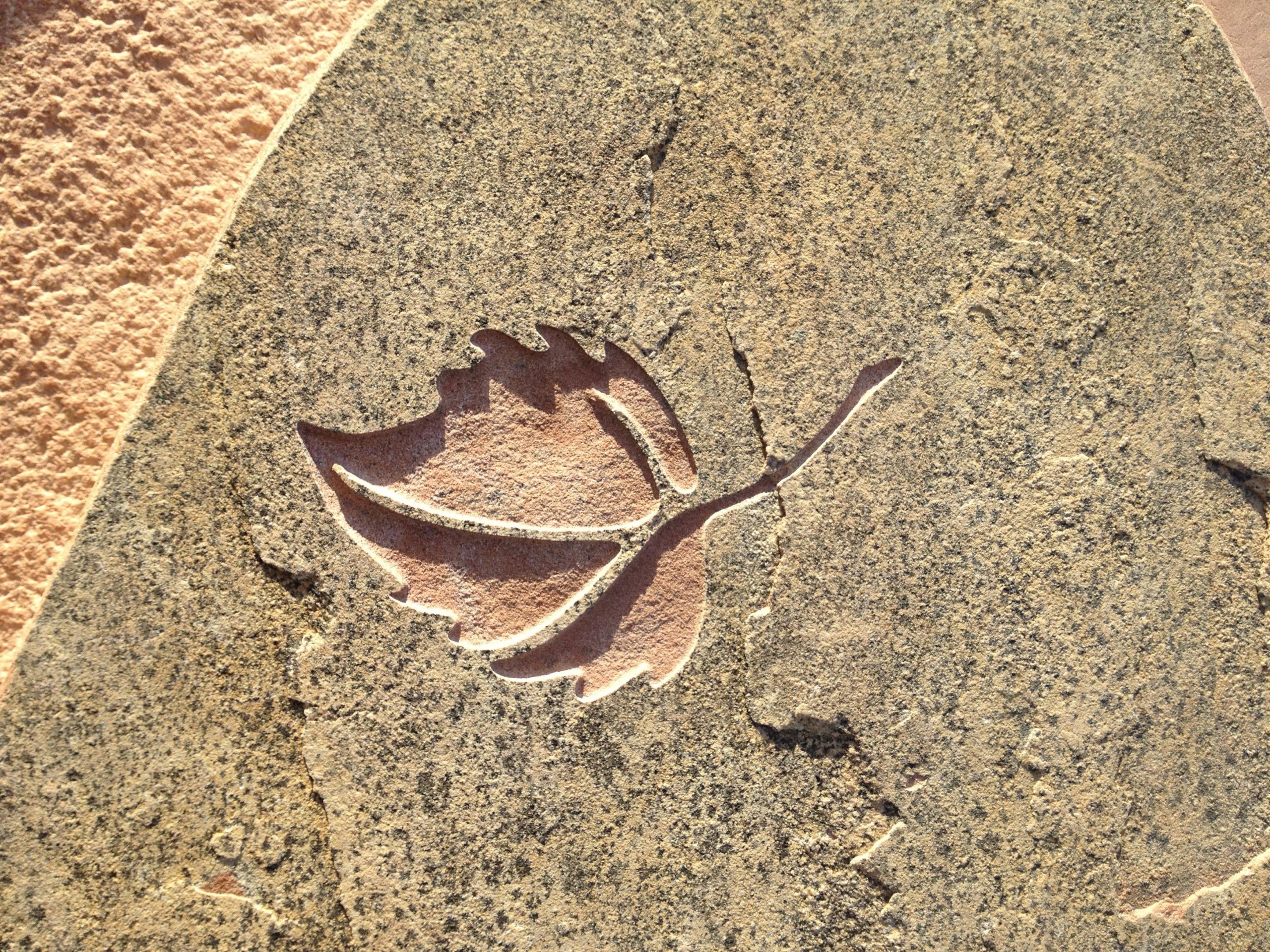 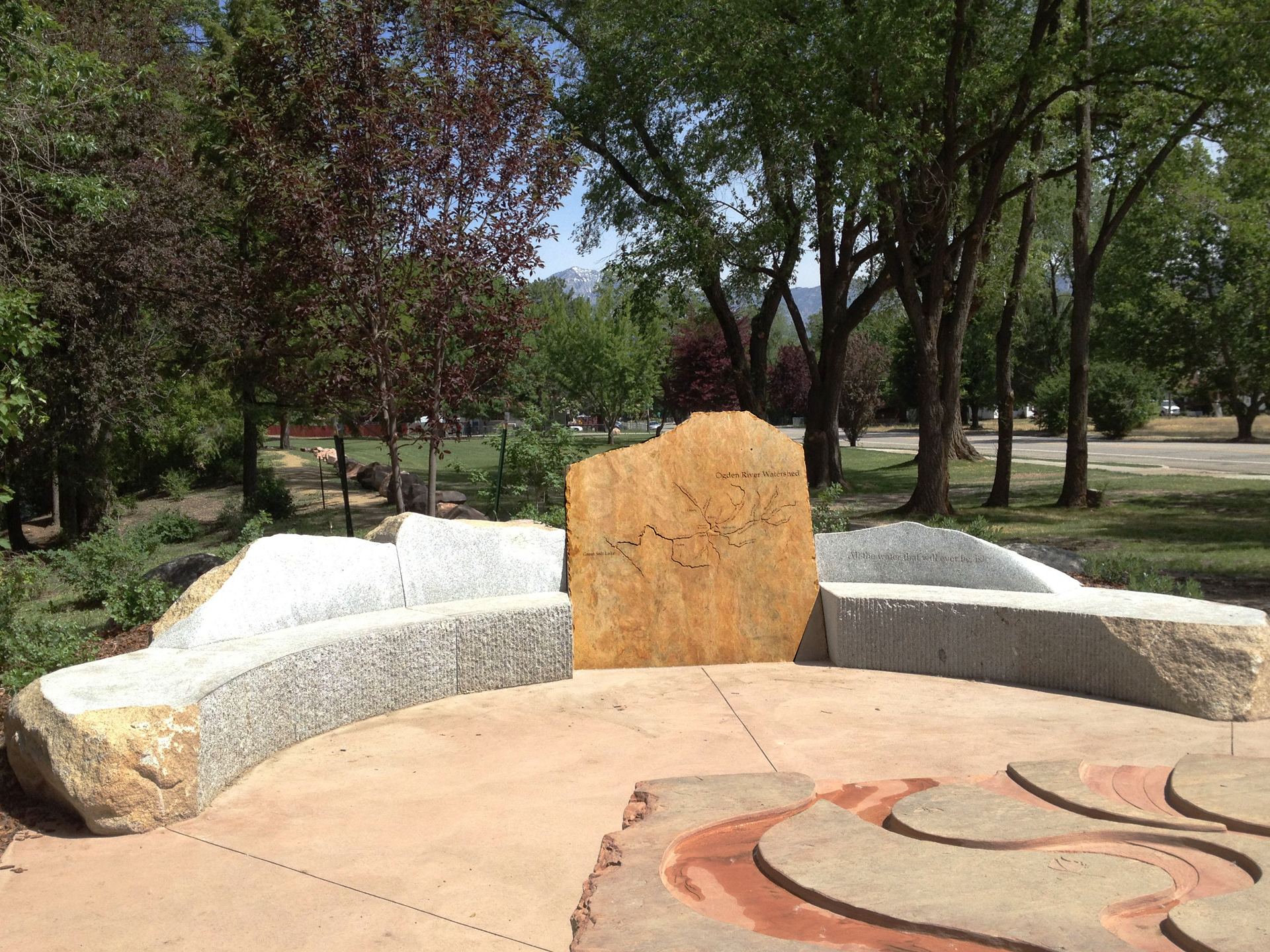 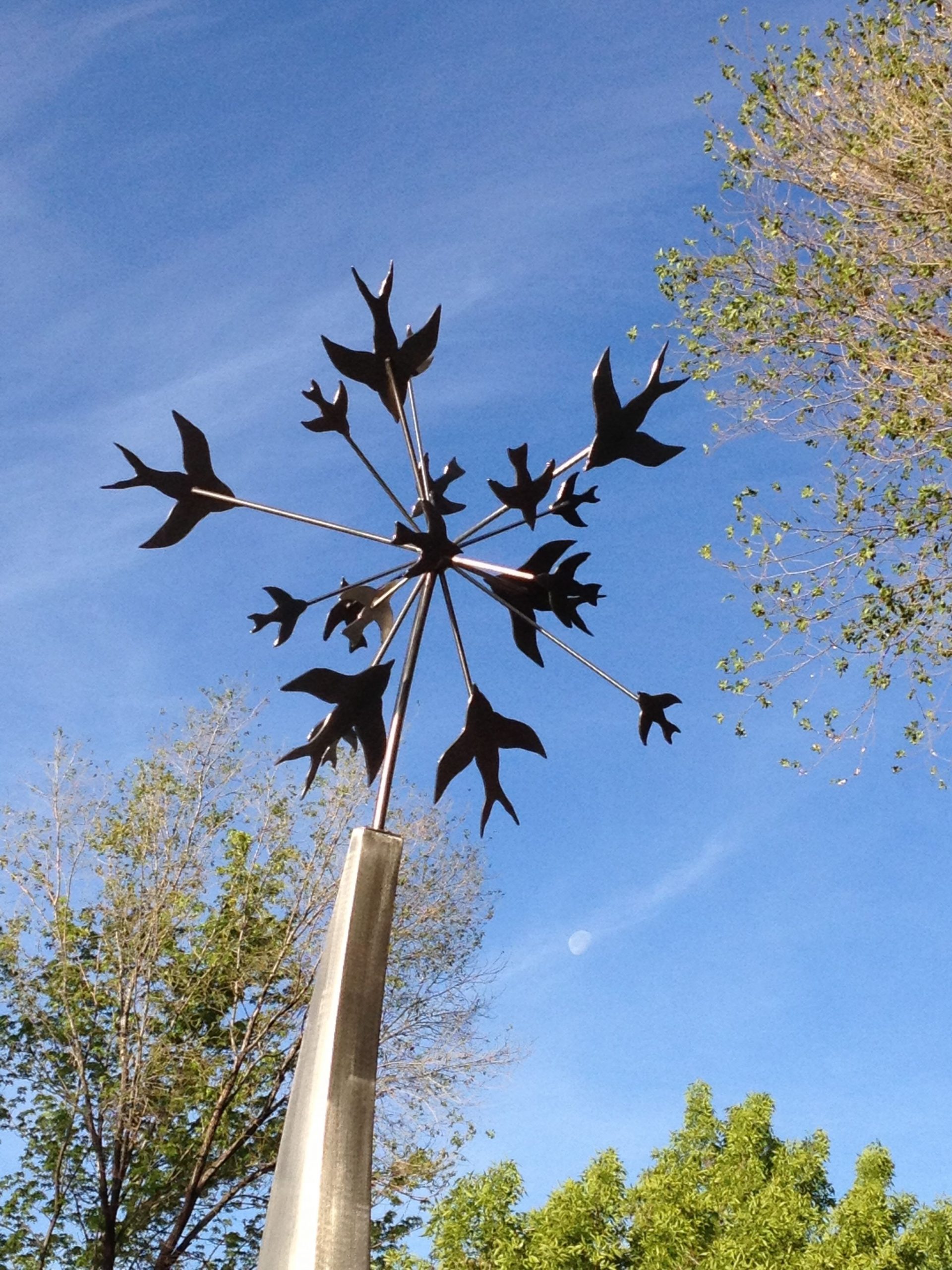 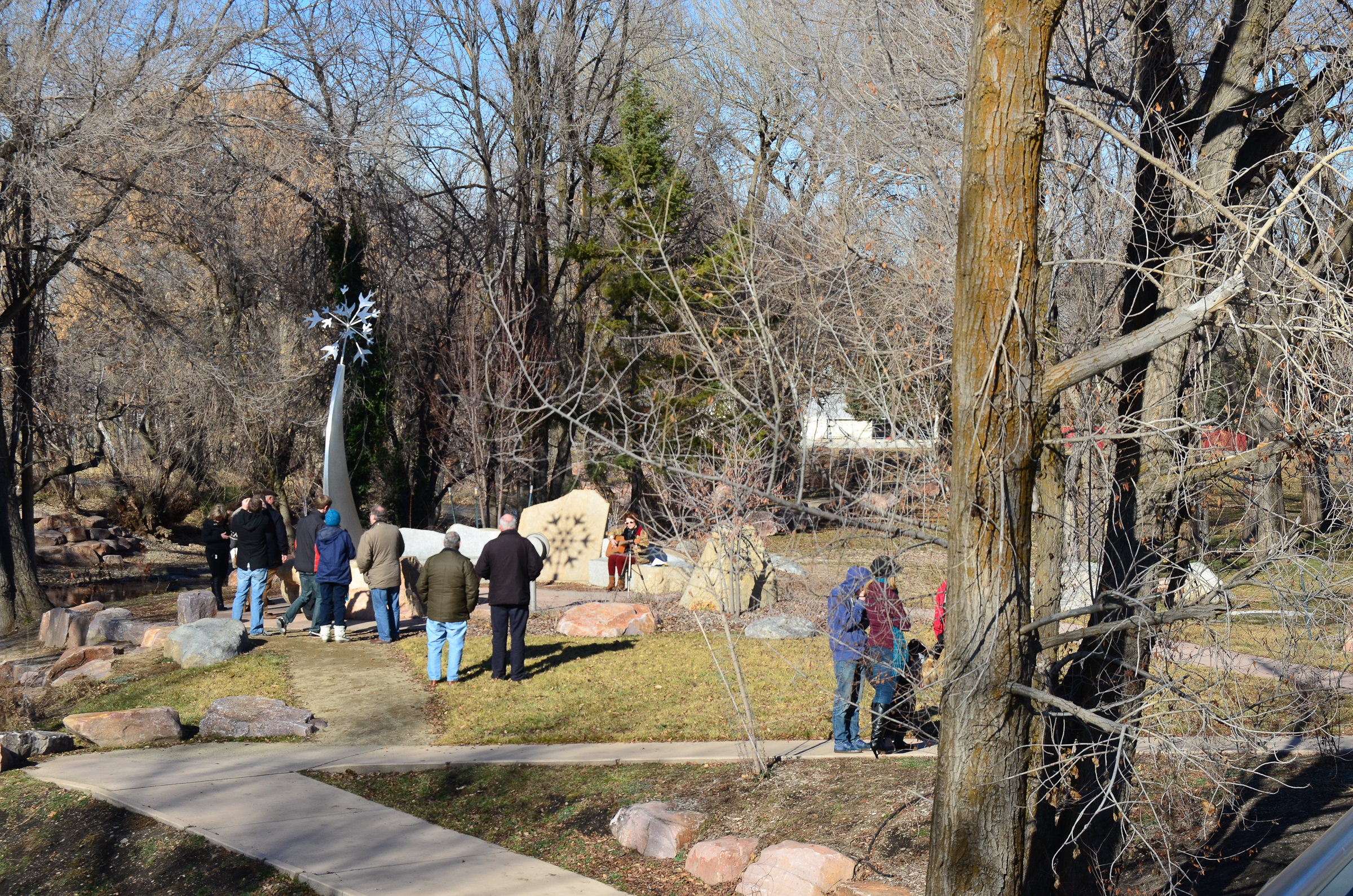 A downtown plaza (22’x32’) on the banks of the Ogden River offers a place for play, socializing, relaxation, and informal learning about the region’s water cycle. A water play table (Utah sandstone, 9’x3’ x2′) is carved with native aquatic species and interconnected river channels that can be filled using a hand pump. A 12’ stainless steel sculpture, depicting birds in flight, is mounted on the water table. On the winter solstice the birds’ shadow resolves into a snowflake, signaling the start of the annual water cycle in the snows of the nearby Wasatch Mountains. A semicircle of handcrafted stone benches flank a granite slab carved with a map of the Ogden River watershed; this stone is oriented to receive the snowflake shadow on the solstice.

This public art project was part of a larger effort to restore a degraded urban stretch of river - to improve water quality and riparian habitat, and create a greenway trail system that encourages recreation. The stakeholders requested that the art support a sense of identity for the greenway system and downtown Ogden, and provide seasonal interest to create a year-round attraction.
The plaza is integrated with a riverside recreational path, and its proximity to the central commercial area makes it an amenity in the revitalization of the historic commercial district. This artful space supports the river restoration effort by helping people connect with the river, and encouraging stewardship for the hydrologic system that supports life in this arid region. The carvings on the water play table introduce visitors to some of the plants and animals that depend on the Ogden River.
On the first day of winter the metal Solstice Sculpture offers a unique surprise: the shadow of the birds atop the sculpture coalesce into a snowflake. This snowflake shadow falls on the Watershed Stone across the plaza, reflecting the origin of area's water supply in the snowpack of the Wasatch Mountains.

I worked closely with the director of Ogden’s public art program, the art selection committee, the mayor’s office, citizens and local businesspeople in designing an artful space that supports a diverse set of environmental, social, recreational and economic goals. The mayor wanted the project to utilize Utah stone, this material being the essence of the state’s many spectacular and world-renowned natural attractions. Through our own and regional networks, we were able to find a beautiful slab of native sandstone for the water play feature.