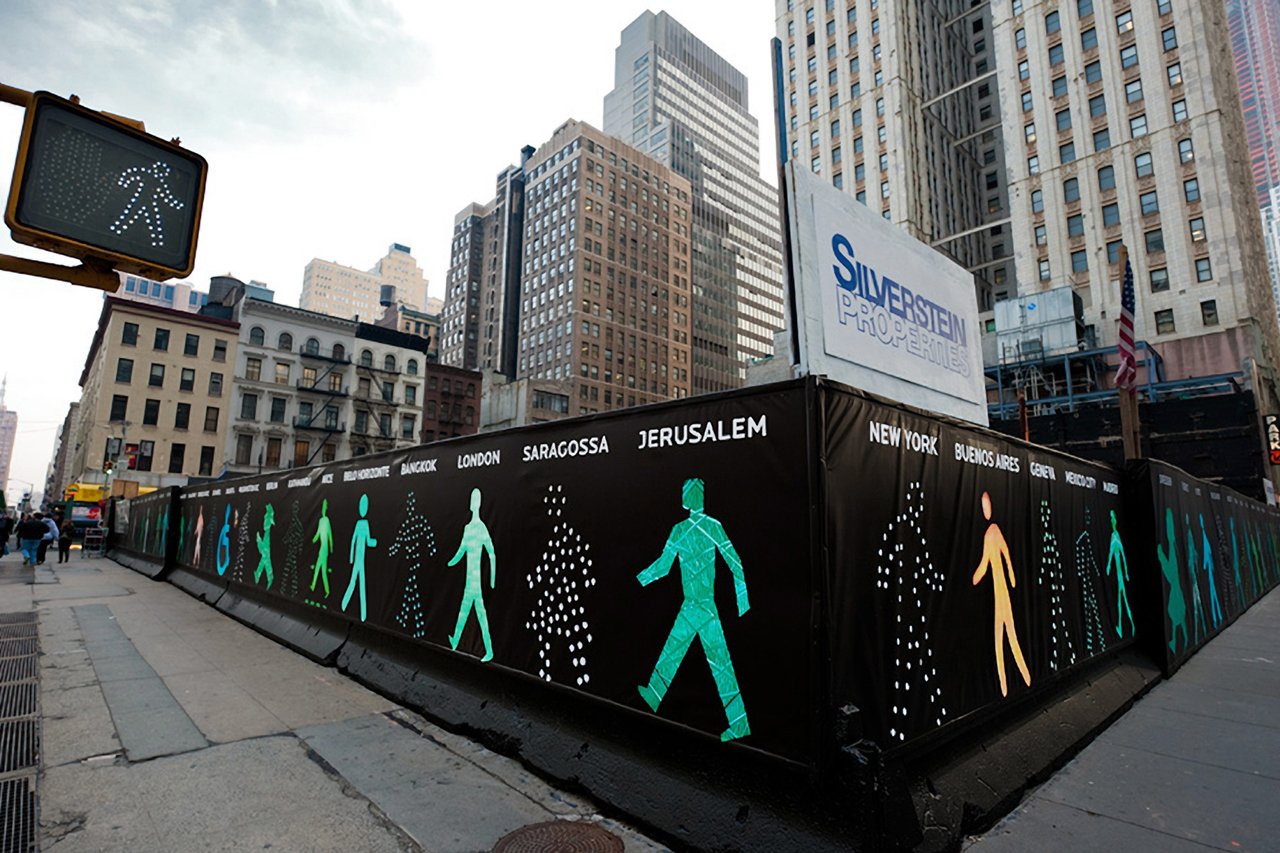 Walking Men 99™ is a site-specific Installation, a photographic collage of 99 pedestrian traffic-light icons collected from around the world. The project was conceived as a collaborative effort of international photographers, each adding a piece to the collage through www.walking-men.com

Numerous traffic-light-characters represent the modern “Walking-Men”. Standardized yet diverse, they commonly show us the safe way of travel. The project explores various representations of this universally rendered 'man', and attempts to examine its inherent conundrum; why is it that while we consider these icons to be typologically identical, they appear to add such a unique character to our urban identity?

Walking Men 99™ is part of Re:Construction, a public art program produced by the Alliance for Downtown New York in collaboration with Artea Projects. This initiative channels the energy of Lower Manhattan's rebuilding process by recasting construction sites as canvases for innovative public art and architecture. As each figure is printed in humane scale, this public art installation becomes visually attractive, inviting the public to engage and interact with the different icons, as they often pose and photograph with them. In the spirit of New York’s multi-cultural makeup, the project can provoke multiple levels of conversation; about how each country chooses to represent the “common-man” in simple pictograms and what that means, but also about the surprising versatility and individual stories that each city carries along its streets. The choice to use 99 icons in the Walking Men 99™ installation was an adaptation to site-specific requirements, which also represent the numerical address of the exhibit located on 99 Church Street.

These human-scale traffic icons have been collected from cities around the globe, and once assembled on one canvas, will represent the ever-growing list of contributors that continuously follows www.walking-men.com and its affiliated social networks, as-well-as visitors of past installations since 2010. The creative process involved in my work is an example for how an artist can gather a group of over thousands worldwide contributors by utilizing the internet as a platform, and motivate people to take part in the creation of a collage that unites them all on one canvas. In doing so, it creates a collaborative process that diminishes all political agenda, and becomes a “graphic Esperanto”. An expert post-production team skilfully processed each of the photographs, vectorizing, scaling, and enhancing the icons before they were incorporated into the final artwork. Once a suitable site was selected for the project, a site survey was performed followed by production of architectural drawings, renderings, and further consideration of materials. A New York City based team, guided by myself and consisting of an Architect and a Graphic Designer, was involved in the production of this composition.