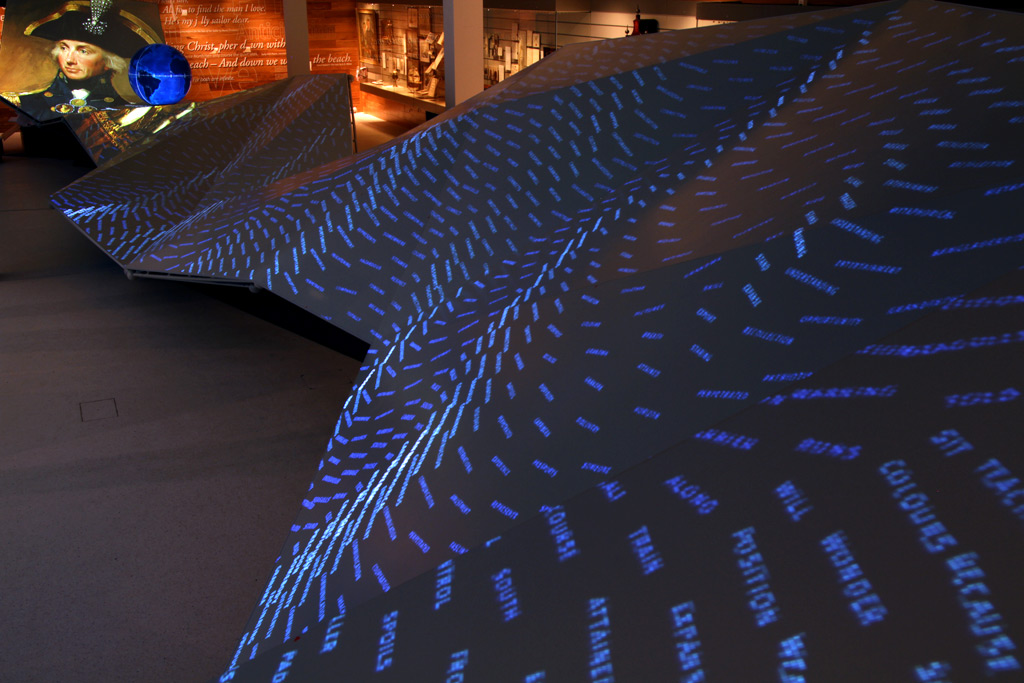 We entered the project after the concept for the new gallery had been established by exhibition designers Real Studios. The brief was to deliver the a-v content which was to act as an introduction to the museum and collections. It had to represent many different aspects of the museum, rather than a single, clear museum style narrative interruption. The layout and approximate shape and design of the triangulated wave structure were already set and therefore became our starting point.

Our response was critical to the success of the space and had to be integrated into an existing concept. The idea of the gallery was to ‘promenade’ visitors along the wave using media and encourage them to the object cabinets at the back of the space using a puffersphere. Although this unit was part of the design there was no concept for using it and we had to integrate this into the overall design for the media content. We were left to artistically interrupt this space and propose what we thought would work and reflect the values of the museum. We thought it best to re-enforce the triangulation of the wave and to use each facet as a display surface for audio-visual assets. The collections of stills and video became a series of journeys through related themes. These triggered an animated astrolabe in the puffersphere that gathered tags connected to each asset onto a 3D word cloud thus allowing visitors to make connections. To give the piece a timeless quality we also designed a typographic approach to recreating the movement of the sea across the wave rather than a CGI render of the ocean.

We worked on this project as a team of artists, designers and creative software developers in consultation with the exhibition designers and the Museum itself.
I acted as the leading artist and director for the project, with Tim Cowie leading on the design, a sound designer Jude Greenaway working on the audio and a software Developer, James George from a US company called Flight Phase developing the whole thing in open frameworks software. The projection distances where very short and we worked very closing with the museums av contractor to plot out the amount of projectors and their exact position along the wave. The project was produced and managed on our side by Alice Ceresole and took over a year to complete.

The installation has been warmly received and continues to be popular part of one of our national museums.