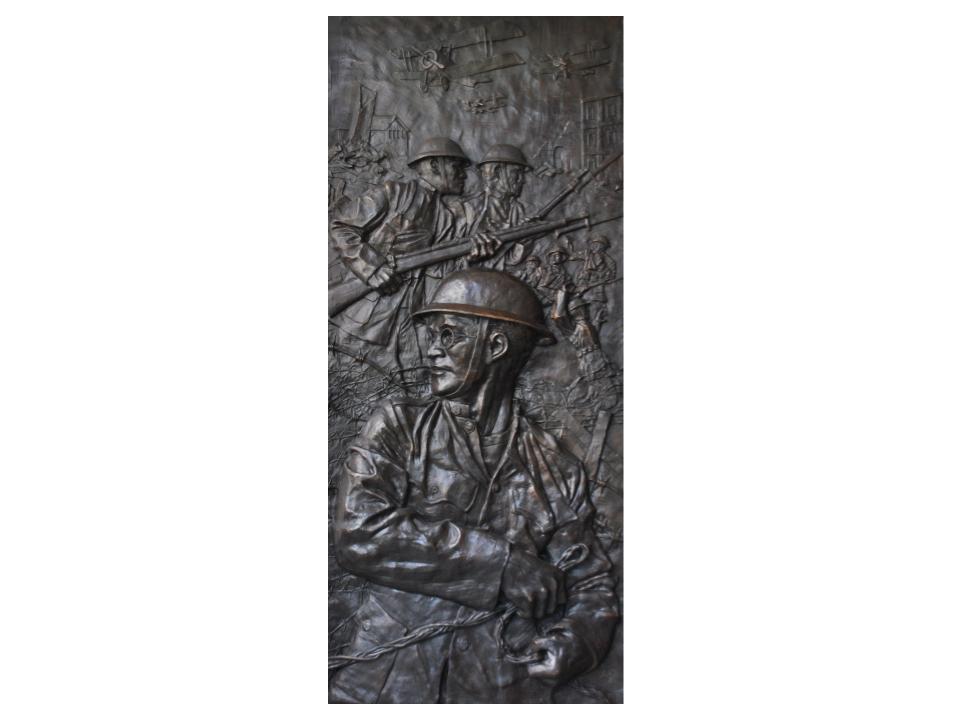 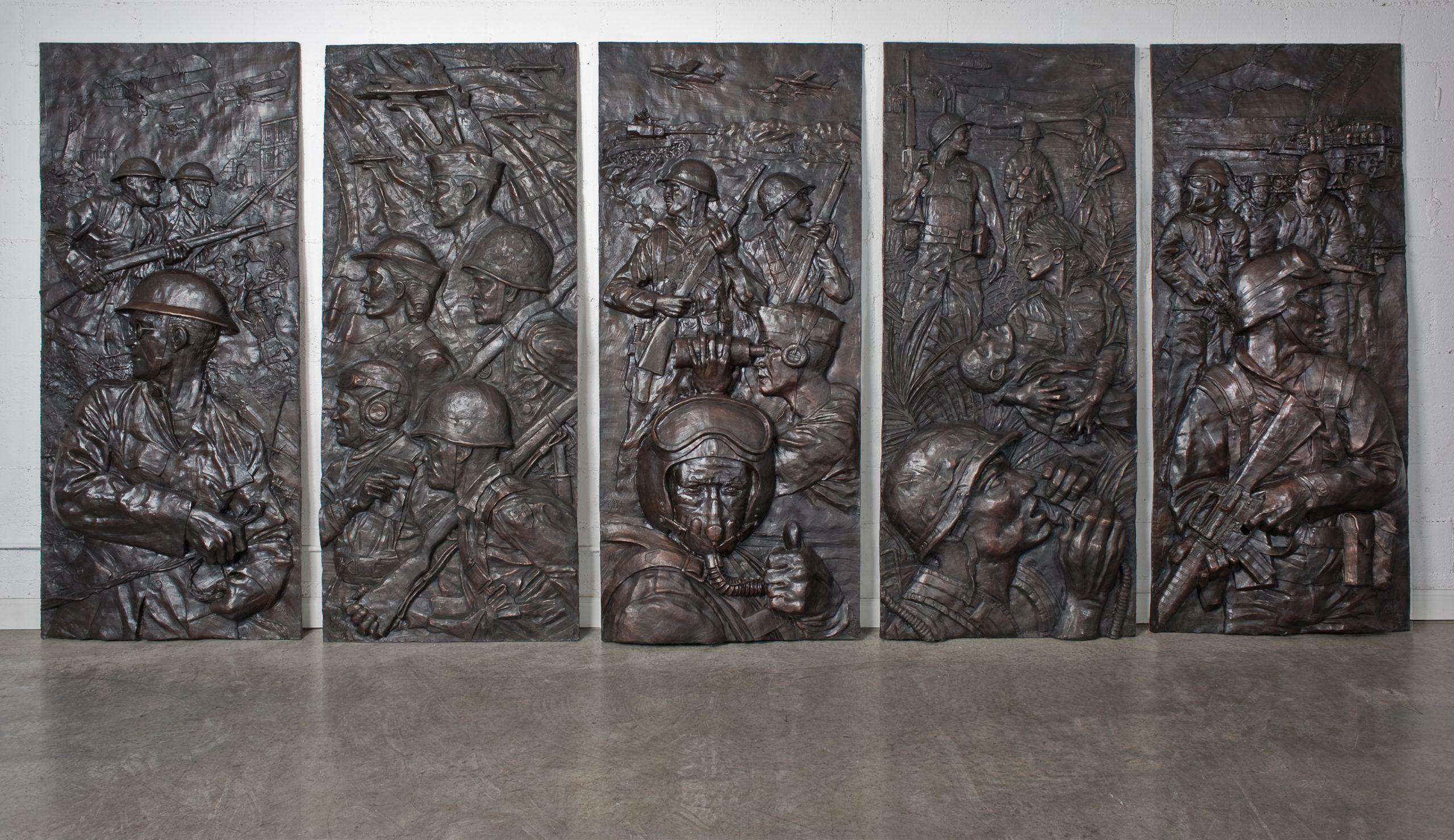 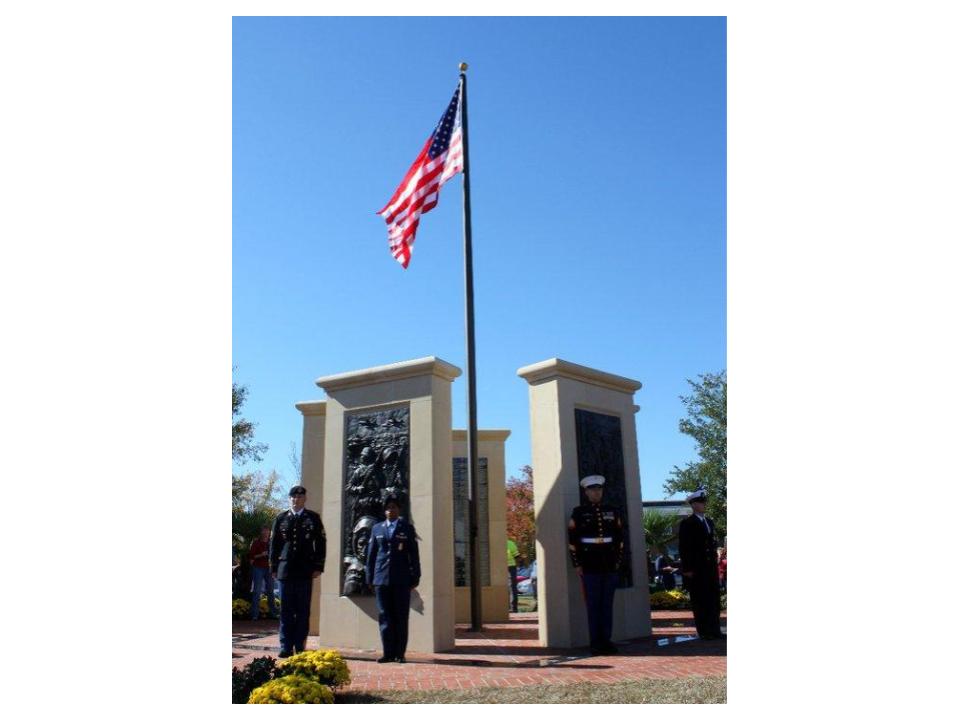 This memorial in Bury Park commemorates the 5 major United States military conflicts of the 20th Century. The installation features five bronze bas relief panels (approximately 4' x 7' feet) mounted on limestone monoliths (6' x 12') in a pentagonal configuration with a flag pole at center. The monoliths are surrounded by brick patio covering approximately 675 square feet with laser cut granite plaques and military seals. The depth of the bronze relief is 5 inches. The Pates' composition maximizes perspective to suggest great distance, achieve a high degree of detail, and include a vast scope of material.

The client made it clear from the outset that they wanted a representational piece that would include both immediately recognizable depictions of the conflicts as well as imagery that would educate and expand viewers' understanding of the conflicts. It was very important to the city that the images be realistic and compelling. The names of service men and women from Darlington county accompany each panel, but the integration of art was highly significant for the commissioning body as the best way to evoke a sense of respect and to provide education to public viewers of all backgrounds and ages. The memorial’s five monuments are arranged in the shape of a pentagon. The sculptures are placed on the outward facing walls. The inside walls bear memorial plaques commemorating individual veterans with ties to Hartsville and Darlington County.

One of their most collaborative projects to date, this project included several committees representing the city of Hartsville and veterans of Darlington County. The Pates also conducted interviews with historians, military personnel, and numerous individual veterans of the 5 military conflicts and/or their relatives. These consultations helped determine what sorts of scenery the vets wanted pictured, which machines, weapons and uniforms to portray, and what stories the panels should tell. Some parts of the composition depict real experiences described by vets in interviews with Charlie and Charles, and other parts feature images that would be familiar to a wide audience. The Pates researched every minute detail, consulting with veterans and experts to ensure that all images were accurate. For example, a Vietnam veteran suggested that the helmet strap be unfastened on the figure in the foreground, because he remembered wearing his helmet this way as a survival tactic. A replica of the Pates' Veteran's Memorial has been on display in the Pentagon.