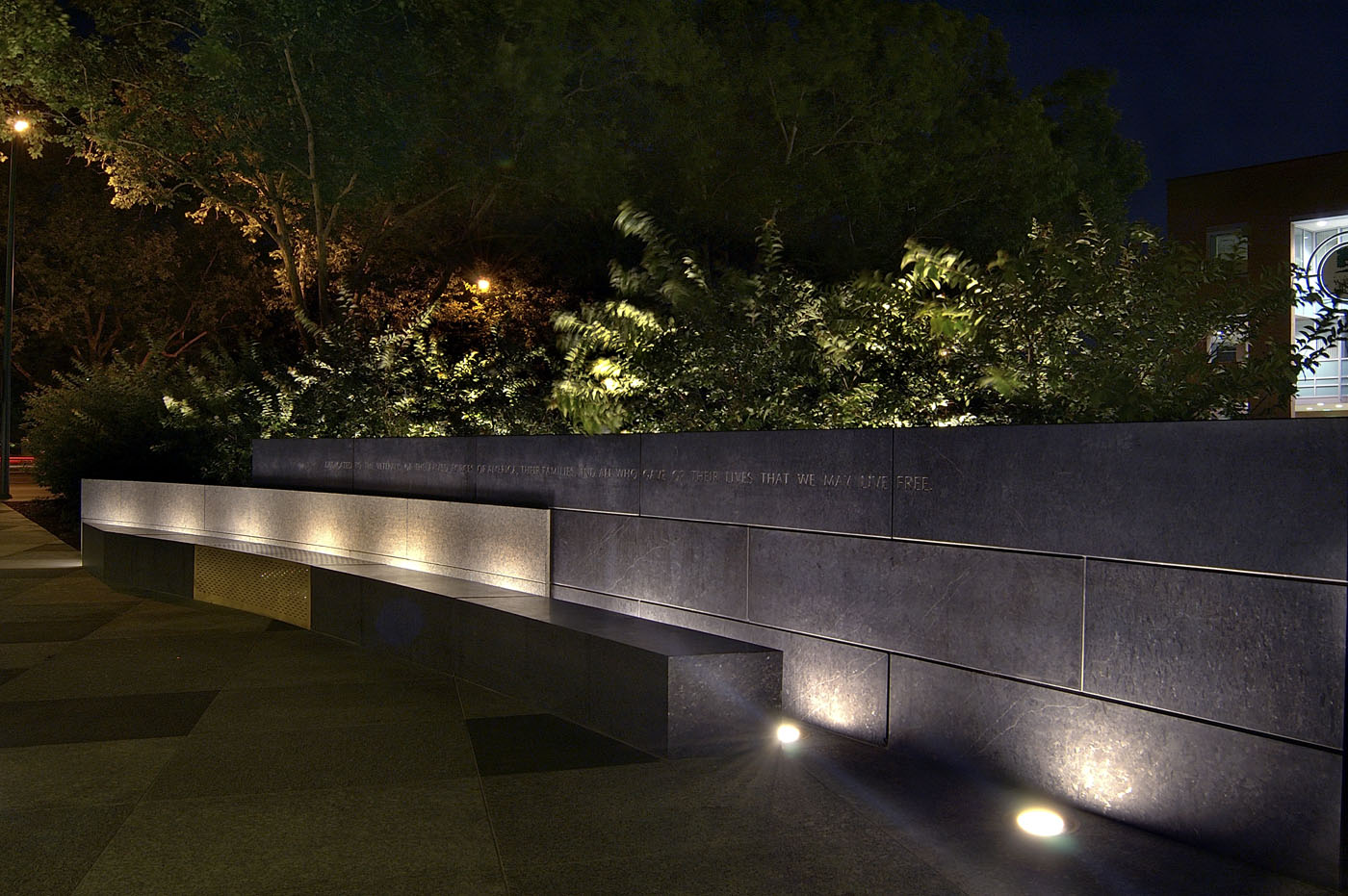 The Veterans Memorial Plaza by Cliff Garten was commissioned by the City of Walnut Creek to honor the five branches of the American military: the Army, Navy, Air Force, Coast Guard, and Marines. The Memorial commemorates all veterans, past, present and future, who have defended America’s freedom and democracy. This project was part of a larger expansion project at Walnut Creek's City Hall. The plaza is approximately 2,500 square feet.

Designed as a series of discrete, changing places within a larger, integrated landscape, the Memorial functions both as a public gathering place and as a place for individual contemplation. The plaza design allows for people of all abilities to traverse the site. The Memorial is composed of five major elements: the Reflecting Pool, the Five Sentinels of Freedom, the Dedicatory Wall, the Paths and Places of Remembrance, and the Grove.

The Reflecting Pool is the central axis of the Memorial. Five granite Paths intersect the pool, inviting the community to enter its space, and are symbolic of the interconnectedness of the five military branches. Each Path ends in a small seating area, or Places of Remembrance, set within the central grove of Gingko trees. The Places of Remembrance each contain a granite bench engraved with a quote associated with military service.

The Plaza of the Five Sentinels of Freedom is located at the northern end of the Memorial. Five elliptical granite columns, or sentinels, are carved with the insignia of the Army, Navy, Air Force, Coast Guard, or Marines on one side, and graced with a gentle flow of water on the opposite side.

The project was a collaboration between Cliff Garten, the City of Walnut Creek and community members.
The process was as follows:
• City of Walnut Creek opened the project for artists to submit designs for a Veterans Memorial
• A panel was convened consisting of the Mayor; a City Council member; a Design Review Commissioner; a Veterans Service Officer; an artist / independent curator; a cultural planner / public art consultant; and an Arts Commissioner.
• A public exhibition of the artists’ conceptual design proposals was held over the Veterans Day weekend in November 2001. Based on extensive community input and a careful evaluation of the design proposals by the Selection Panel, the Veterans Memorial Plaza design submitted by Cliff Garten Studio was chosen for implementation.
• Cliff Garten Studio collaborated with the Walnut Creek Arts Commission and Arts & Recreation Director to finalize conceptual design that satisfied Arts Commission requirements.

The City of Walnut Creek continues to use the site annually for Veterans and Memorial Day events, and it serves as a hub for community gatherings, ceremonies, and other events of recognition pertaining to those who serve and protect our country.