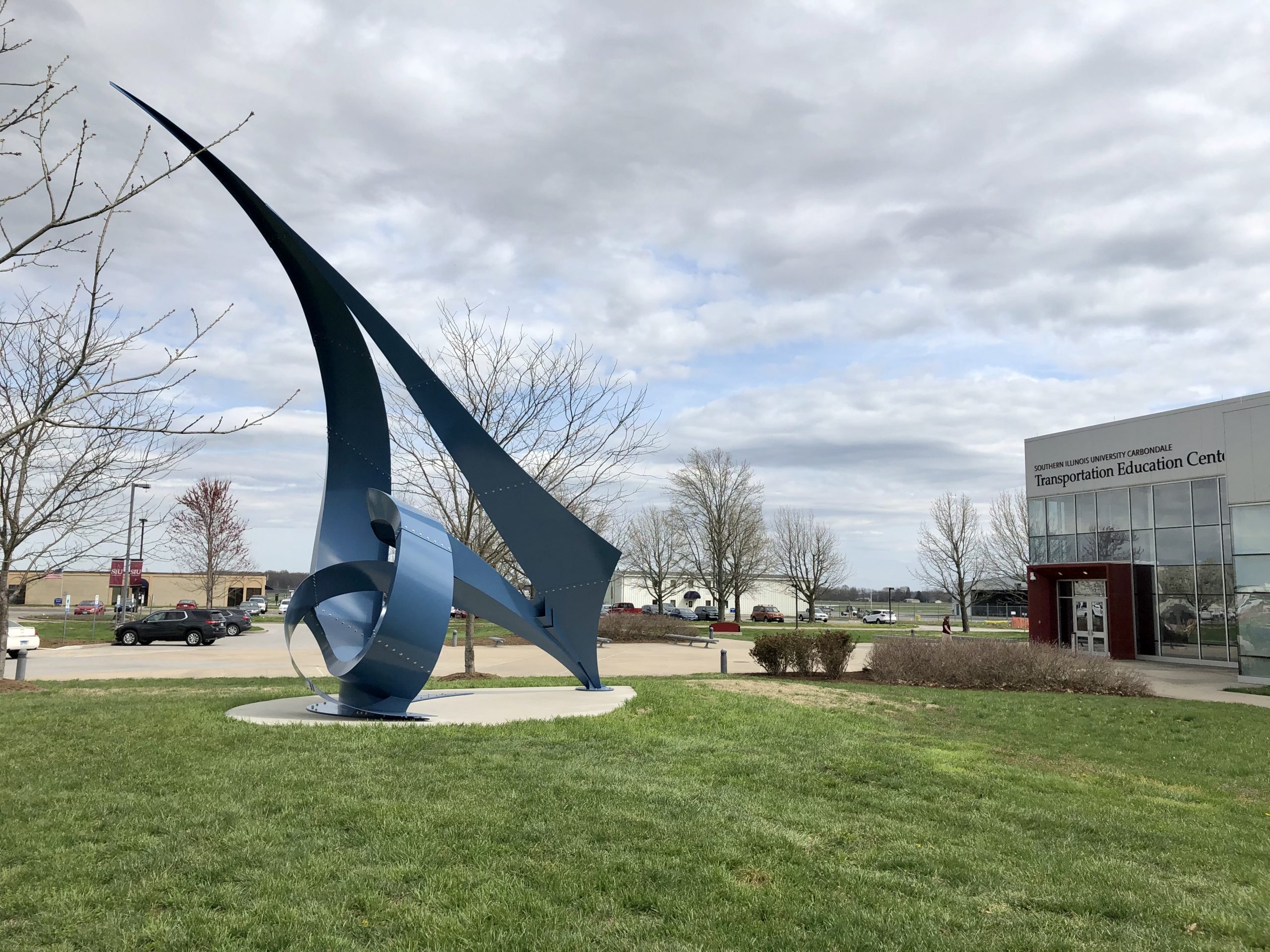 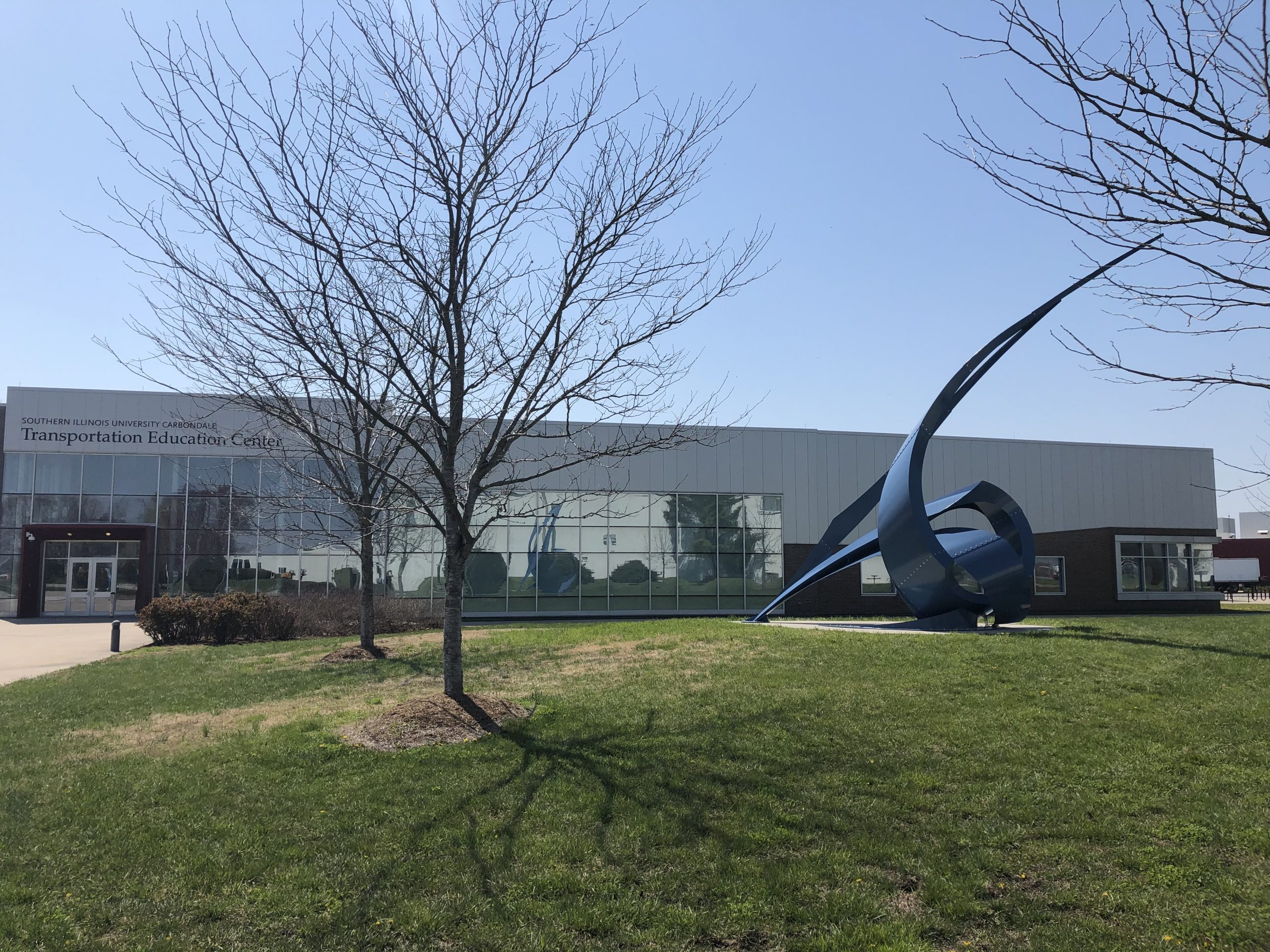 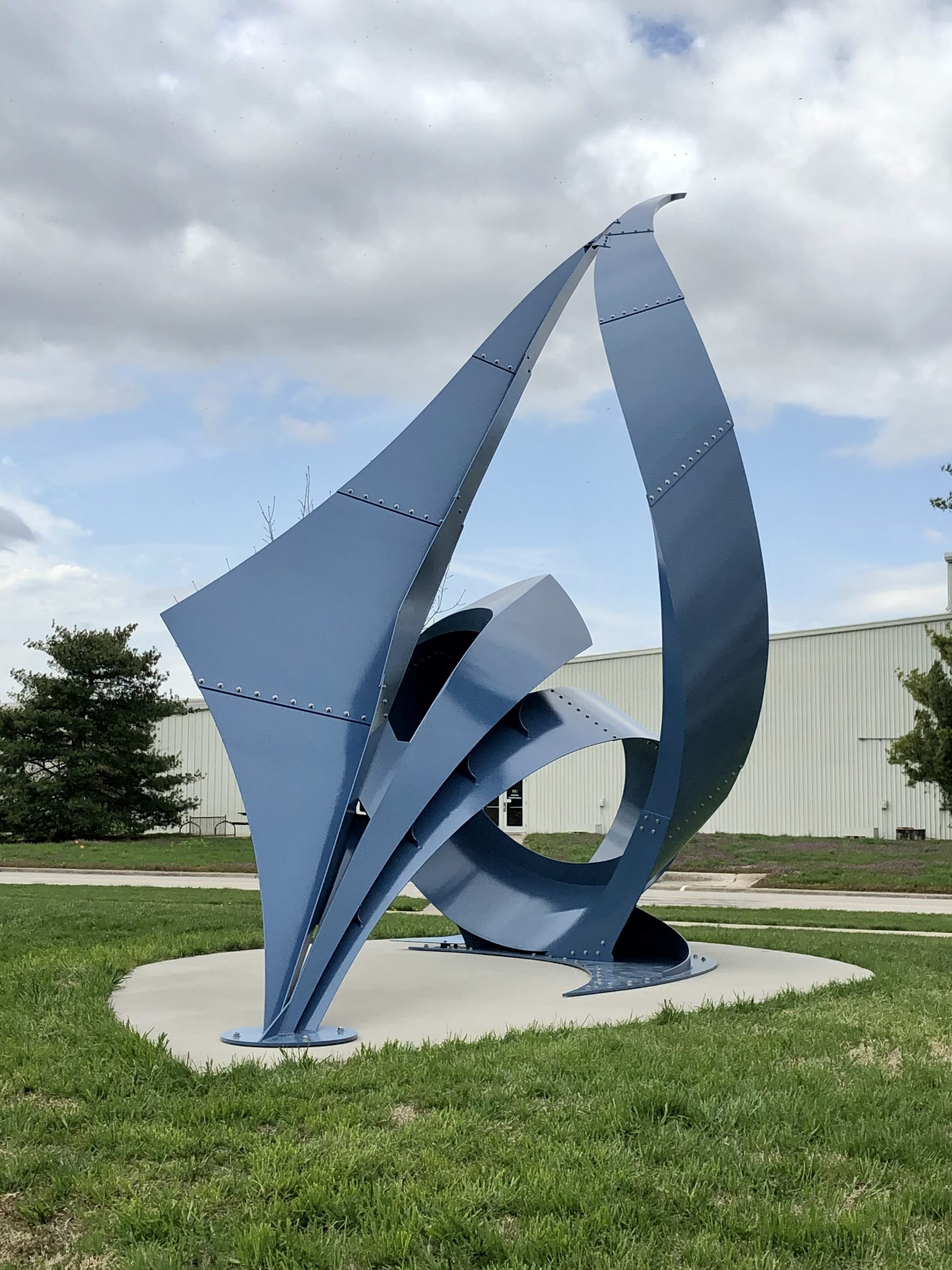 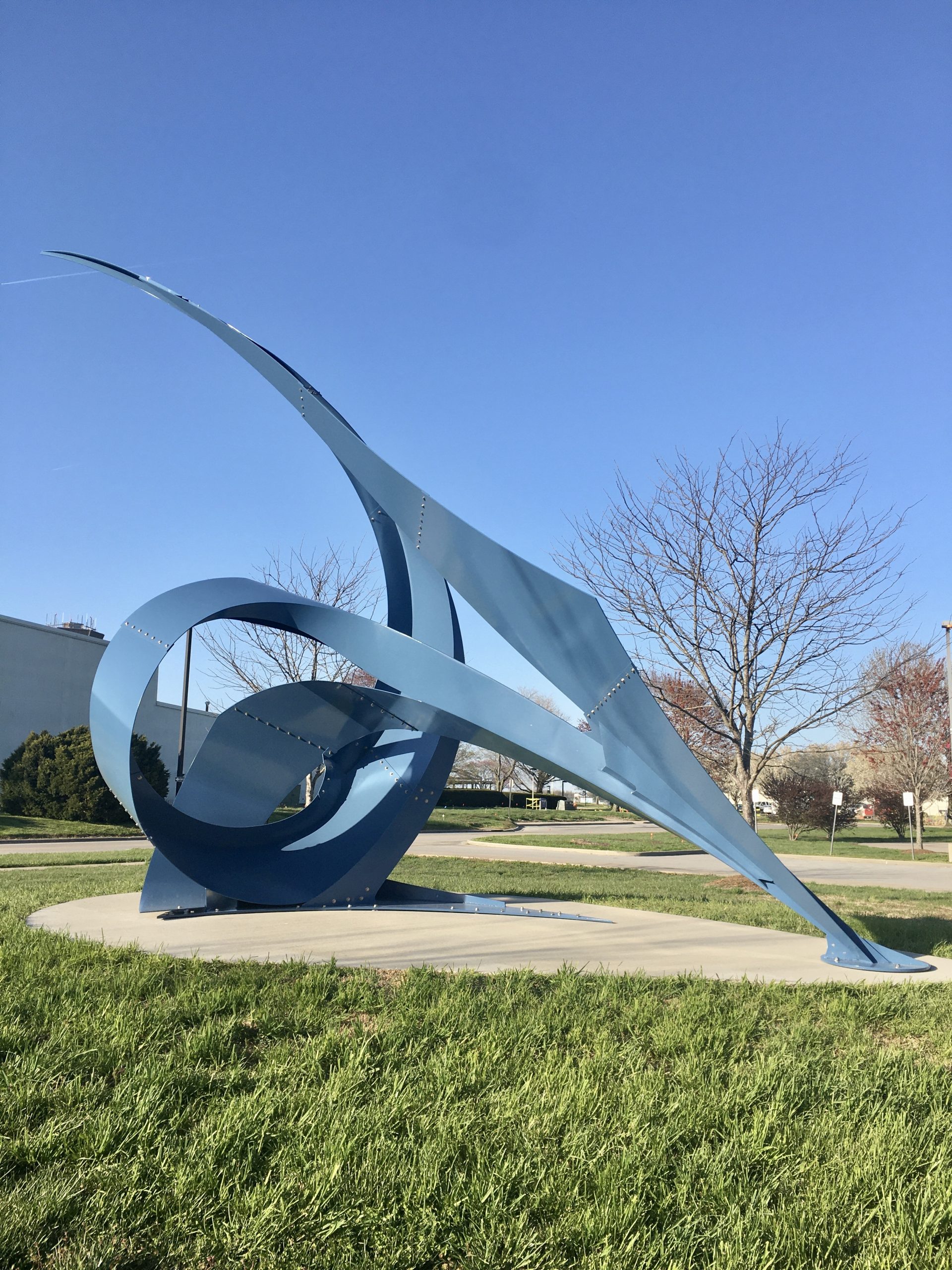 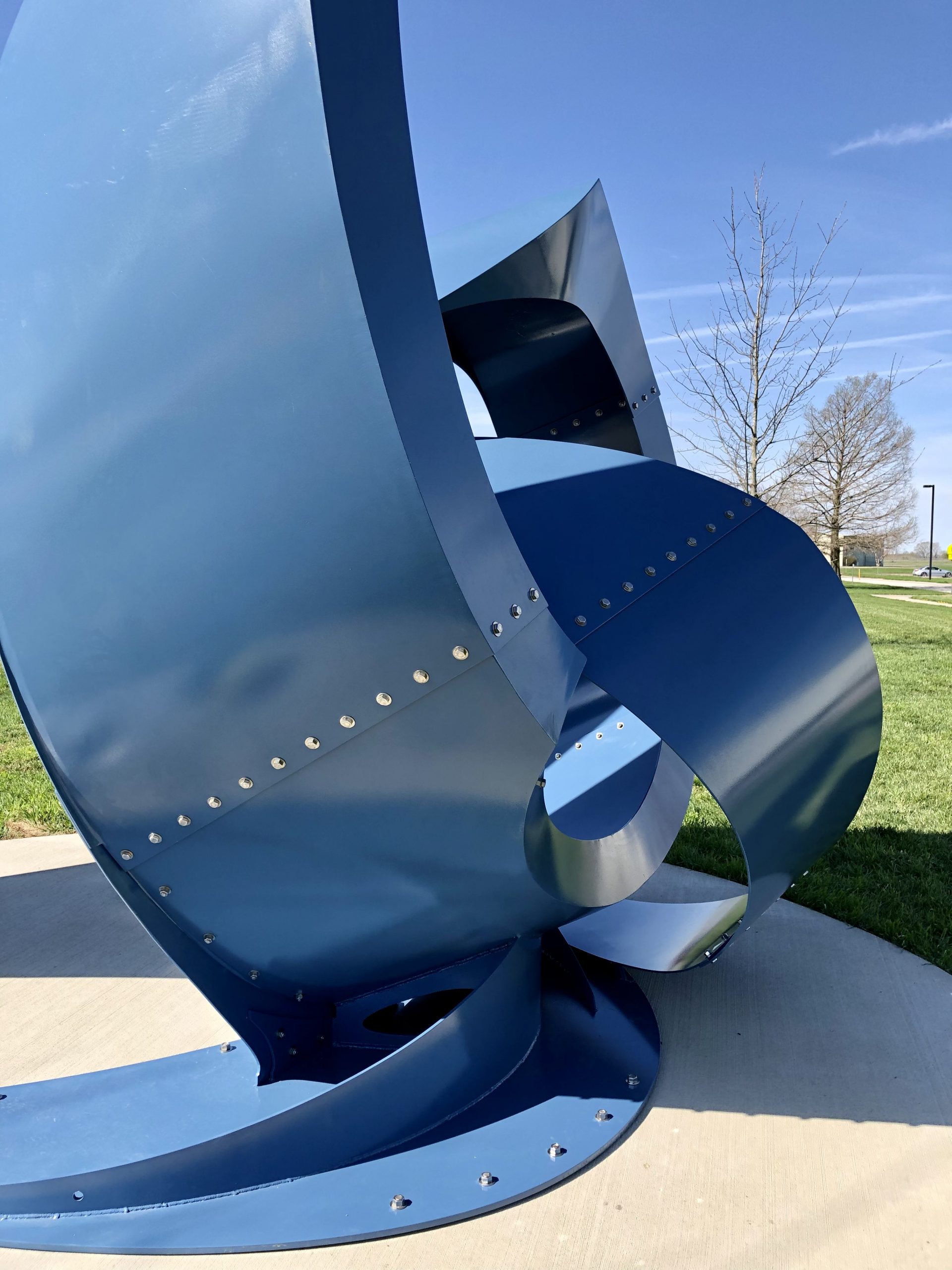 “Velocity,” a 22-foot tall fabricated and painted steel sculpture (with a footprint of 10 feet by 27 feet) by John Medwedeff is in line with the artist’s perspectives with his work, which he notes, “in a variety of ways already has an underlying focus on industrial and organic qualities that I associate with the architecture of motion.” Installation of the 4,000-pound sculpture was finished March 30, 2021, and is one of the largest pieces Medwedeff and his staff have built. The sculptor and metalsmith emphasized that work on this scale requires a team effort, and he credits the Medwedeff Forge & Design fabrication crew of Megan Robin-Abbott and Sarah Dorau with helping him build the sculpture.

John Medwedeff designed “Velocity” shortly after visiting the Smithsonian Institution’s National Air and Space Museum and its National Museum of American History, noting that both institutions “trace the history of transportation from sailing ships to steam power, to jets and rocketry.” The sculpture, near the north entrance of SIU Carbondale’s Transportation Education Center, fits perfectly with the mission inside the building: training students in the automotive and aviation industries. Transitioning from a 1/48 scale model to the actual construction of the full-scale work required a team effort. He enlisted the support of an individual who had the technical ability to scan the model and then work with him and his Studio Supervisor, Megan Robin-Abbott, to develop all the dimensional details down to the last bolt in a 3D modeling program. The pattern drawings were then sent to a machine shop for laser cutting. Megan and Fabricator Sarah Dorau initially built a ¼ scale model that was true to all construction details, then John and his team worked for 4 months to bend, weld, finish and assemble “Velocity” in the studio using a 10 ft wide plate roll to precisely form the parts, matching the measured geometry of the model.

The commission was won in a statewide competition through the Illinois Capital Development Board, Linda Suits, Director. John Medwedeff has been creating sculpture, site-specific architectural ironwork, and furniture for over thirty years. His work is represented in numerous collections and exhibitions in the United States, including the Illinois State Museum and the Minneapolis Institute of Art. Medwedeff has been featured in numerous publications and broadcasts, including WTTW Chicago’s program Arts Across Illinois; the HEPHAISTOS Yearbook 2006 (Peter Elgass’ “Metall Design International,” Germany), Direct Metal Sculpture and The Contemporary Blacksmith (both books by Dona Meilach), and the journals Art & Antiques, Architectural Digest, American Craft, This Old House, Metalsmith, The Anvil’s Ring, Fabricator, and Sculpture. Following a three-year blacksmithing apprenticeship with James Wallace at the National Metal Museum in Memphis, TN, he earned his BFA and MFA degrees in art from SIU Carbondale. As an educator, he has taught workshops at numerous universities, craft schools, and symposia, including Washington University in St. Louis and Penland School for Crafts in North Carolina. He's been running Medwedeff Forge & Design since 1988.