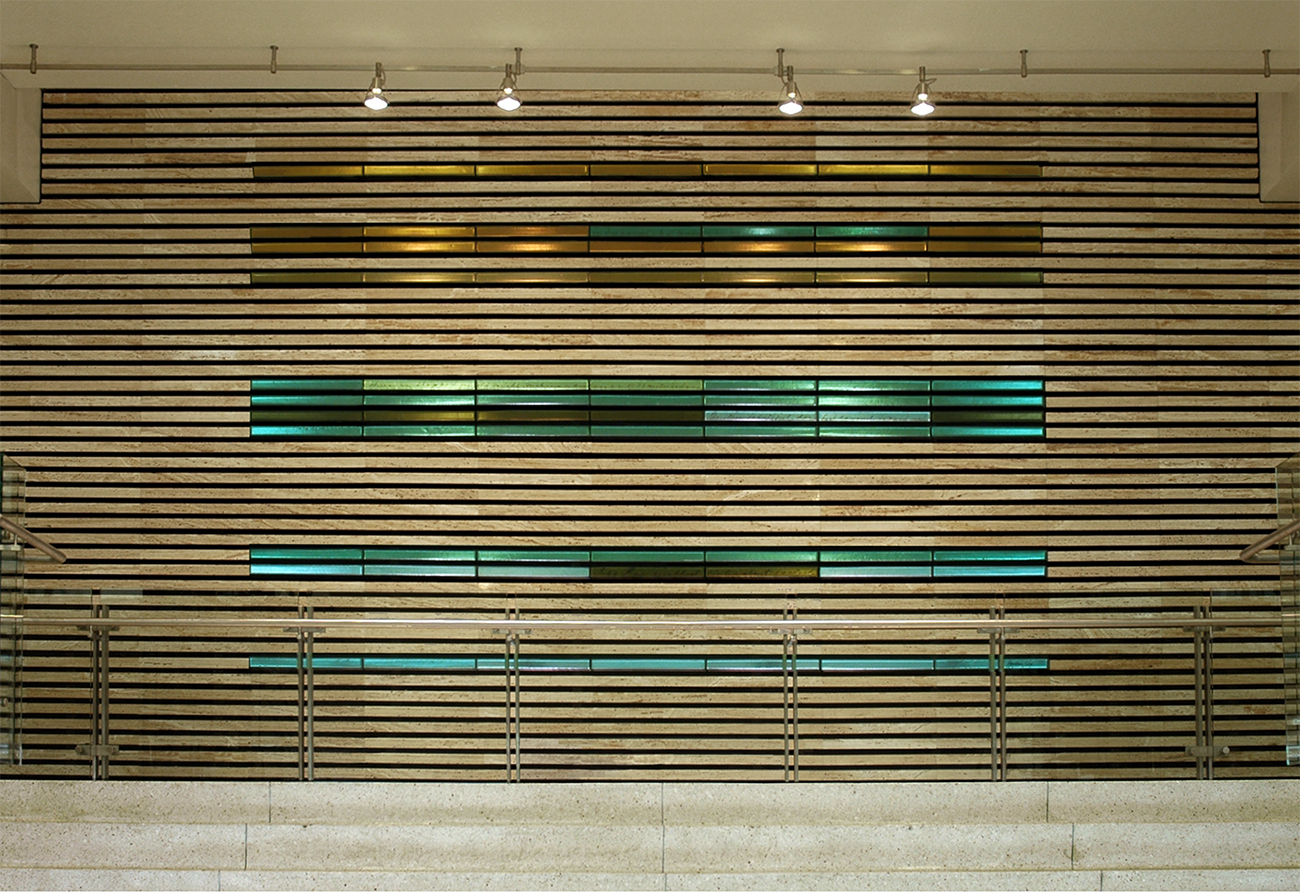 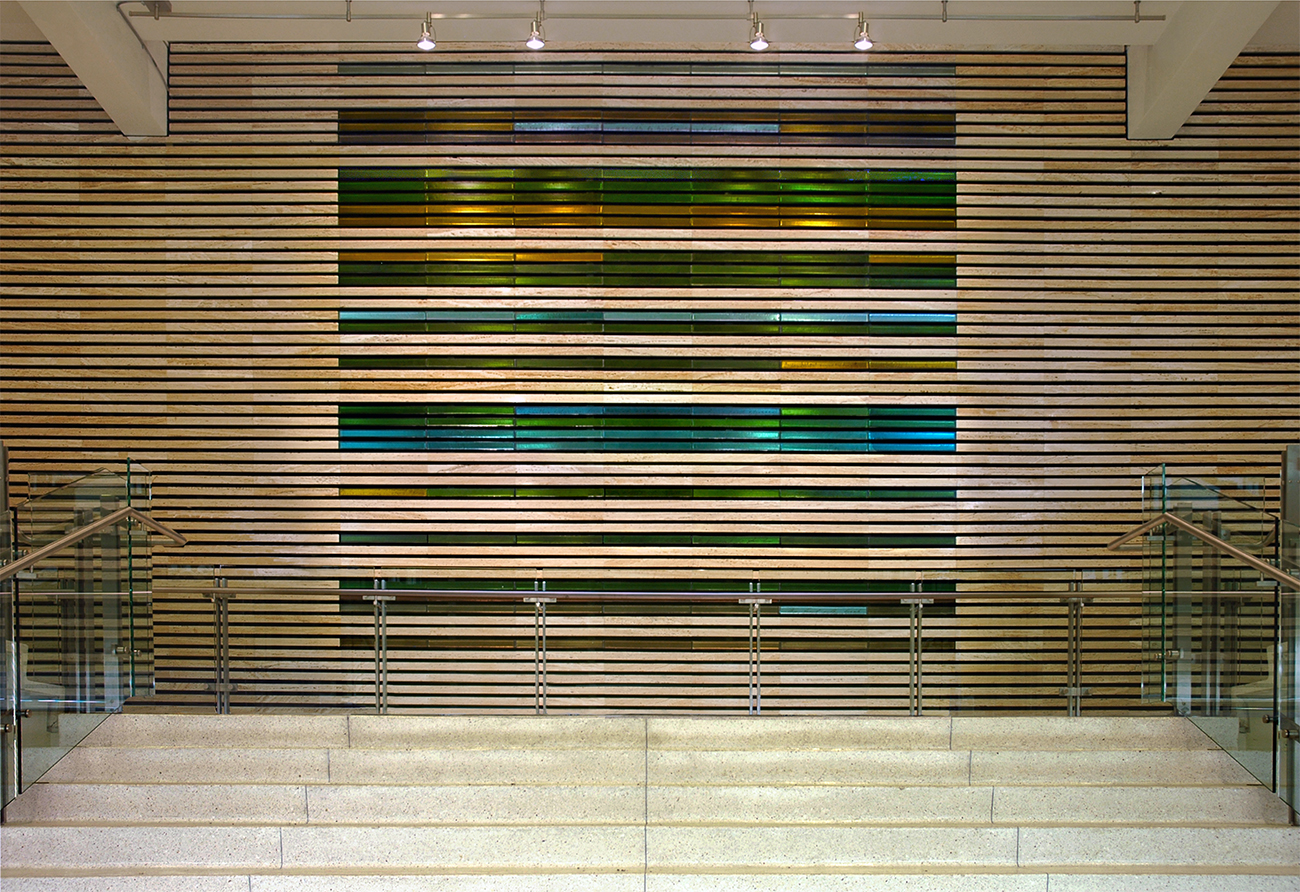 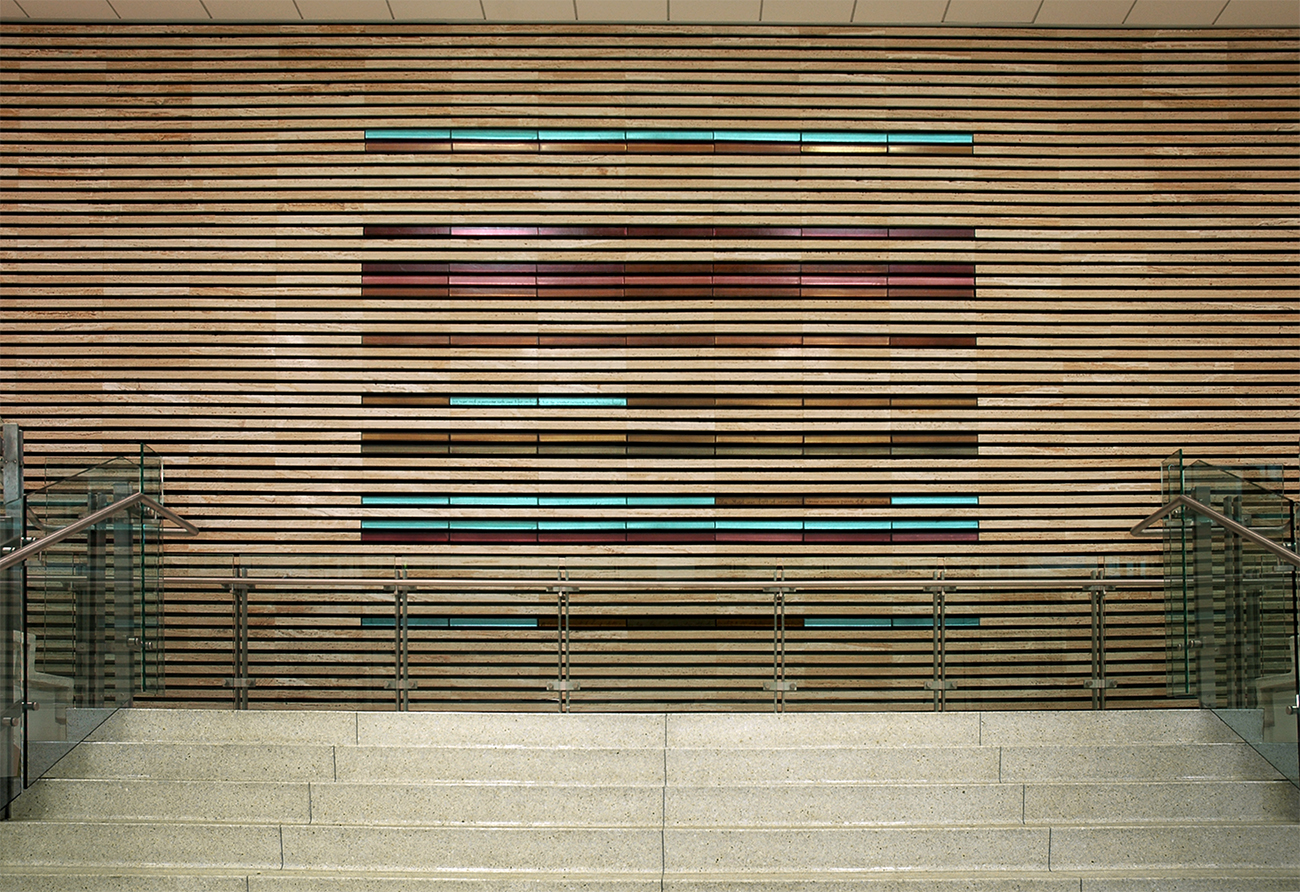 Entitled, “Another Beautiful Day Has Dawned Upon Us”, this work was commissioned by the State of Utah as part of the Utah Public Art Program. Handcrafted, kiln-cast colored glass bars, silvered on the back are integrated into the louvered travertine wall spanning four stories of the original grand staircase. Selected handwritten diary passages, from the Library’s private collection about the westward migration, are etched into the backs of numerous glass bars and appear through the glass.

As part of an extensive renovation of the library, an exhaust system in the event of fire required that the original travertine behind the grand staircase be removed and repurposed to create horizontal apertures behind which a plenum leading to rooftop fans was created. The art glass needed to be integrated into this fixed louvered system. Additionally, the art selection committee wanted something specific to the library’s private collection.

The library's contains a collection focused on the westward migration of Mormon pioneers in the 1850s. Among all the maps and documentation of trails, the collection includes a large number of handwritten diaries that were scanned by the library for easy digital access.

I had a strong impulse to excerpt the texts intuitively, pulling out fragments that spoke to me on a poetic level or purely visual level. I tried the passages out in different configurations until they began to suggest a beginning, middle, and end. As this flow became more apparent, I tweaked it a little more deliberately to solidify the loose sense of narrative. By this point, I was envisioning a work that would span the four levels of the library. I cut the text into small groups that would take readers on a kind of journey up through each level of the space, starting with the first floor and ending on the fourth floor.

Following are several of the excerpts: • You shall be endowed with all the wisdom knowledge and understanding that your heart can deserve to accomplish all you seek • Another beautiful day has dawned upon us • July 3 Prayer breakfast started about 8 oclock • The roads are very bad, it is impossible to travel a great distance in a day. • Were it not that “God is with his people” the thoughts of saints traveling over such a road would be almost unbearable. • This great river is what I love • May joy and peace your steps attend. As journeying to that golden land. • As we travelled eastward the country seemed more prosperous, with less evidence of war. • Saw very large herd of Antelope in the Black Hills to-day It commenced snowing and was very cold. • The boys bought two chickens • The lord was very good to his people and blest us with a good passage • Two men and a woman each over 8 feet in height, but the greatest curiosity was Barnum himself. • A company went to hunt killed one buffalo Joe lent my six shooter pistal to B Baker and he lost it.