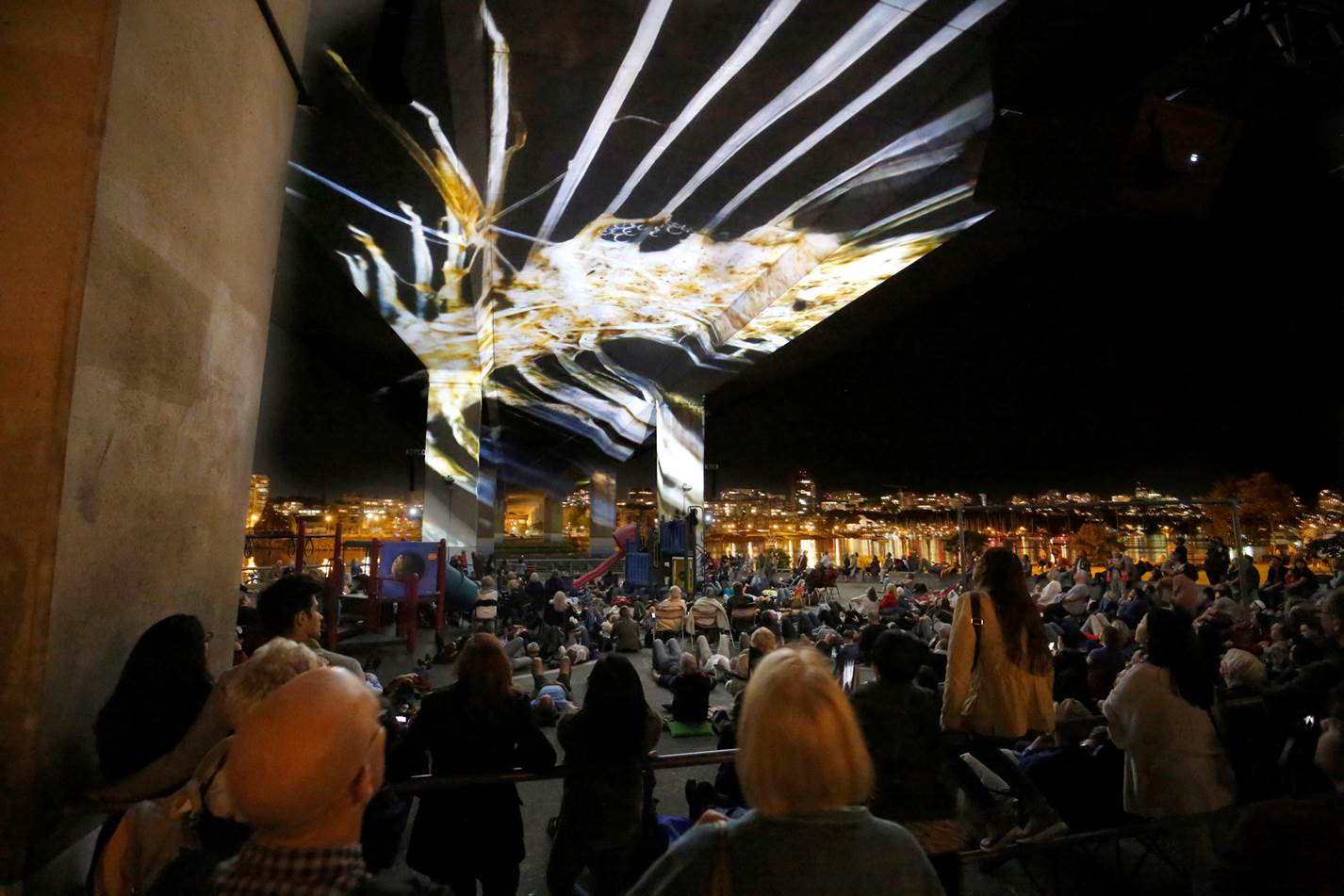 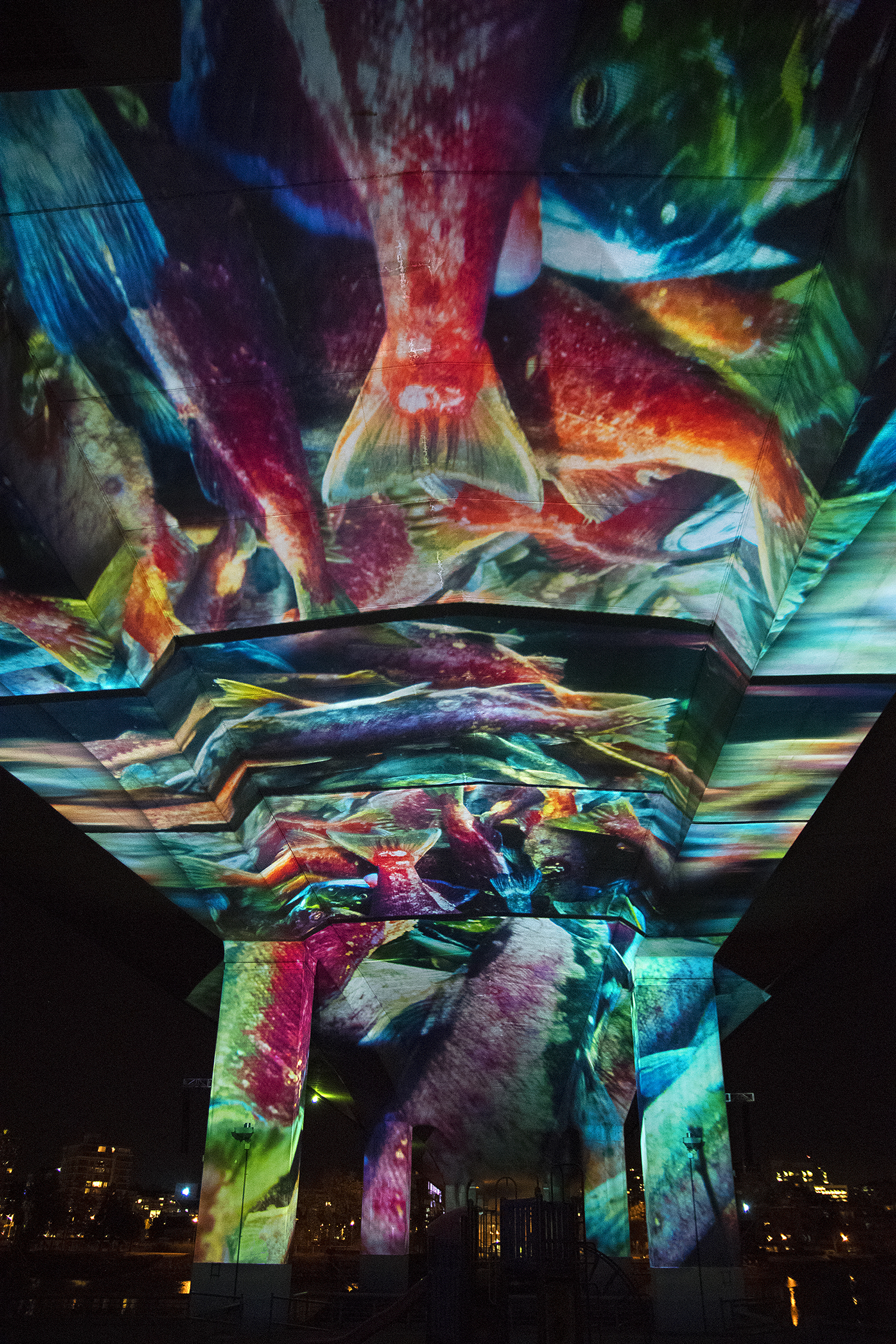 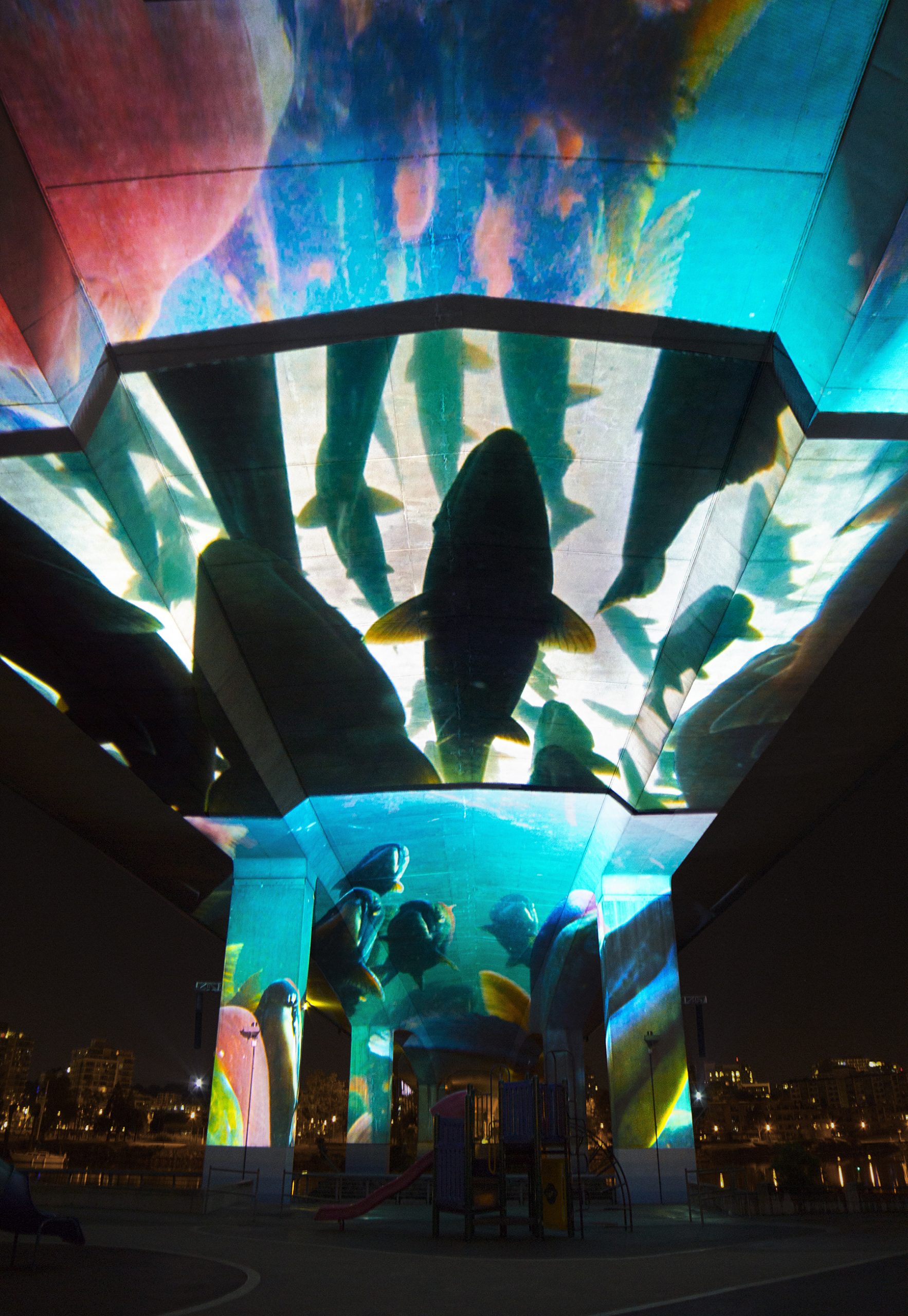 UNINTERRUPTED 2017 was a site-specific cinematic installation that transformed Vancouver’s Cambie Bridge into a wild river, immersing audiences after sunset in the breathtaking migration of Pacific salmon . Conceived by director Nettie Wild, and realized with producers Betsy Carson and Rae Hull and a team of artists and specialists, UNINTERRUPTED was witnessed 30,000 spectators over three months. Several years in the making, the project pushed filming, editing and digital mapping technology to the limit, creating a cinematic event that the international design magazine Wallpaper* called one of the world’s must-see outdoor art exhibits. Please see www.uninterrupted.ca

Our objective was to bring the heart of a river into the heart of our city with abstract art that captured wonder. Combining these images of the natural underwater world with the concrete structure of the bridge shaped our 24 minutes of storytelling in a way that was surprising, big, public and free. UNINTERRUPTED contains no narration, making it an ideal event for visitors and residents of all nationalities. The result? An abstract work that framed the familiar in an unfamiliar way and which resonated with all ages from 7 – 107. Significantly, because UNINTERRUPTED was free and in a public playground, many of our audiences returned four and five times bringing family and friends to play and swim with our fish, culminating in 30,000 visits under the bridge.
The intent was to create a work of art that would freshly interpret the magnificence of the natural world to urban audiences – to forge an emotional connection with one single, extraordinary act of nature – and in doing so generate reflection on the impact of an increasingly dominant urban environment.

Beginning in 2010 with the original inspiration from witnessing the live migration of BC salmon, the project grew to ultimately include approximately 130 artists, technicians, web designers, researchers, editors, graphic designers, and an extensive communications and public outreach team. Our collaborators ranged from our underwater cinematographers (who became scuba divers specifically for this project) and the First Nations on whose territory we were filming and then projecting UININTERRUPTED, to Technical Director Anthony Diehl and his team at Colours & Shapes. The mind-bending challenges of editing for the shape of the bridge was carried out by Editor Michael Brockington. Then there was the accompanying interactive website team of researchers, writers and our social media designers, public outreach specialists and publicists.

Canada Wild has a 30-year history of creating and distributing challenging theatrical feature documentaries, but Uninterrupted stretched our capacity for invention in every way. On the production side we were also collaborating with our stakeholders, including the City of Vancouver, particularly the Engineering and Parks departments, as our location required building significant infrastructure to bring power to the site, and was situated in a well-used playground. A case study can be found here:
http://www.wearecoloursandshapes.com/uninterrupted/

WINNER - DSE APEX Award, Las Vegas March, 2018. Best Projection in Public Space, North America. WINNER - Canadian Cinematographers Association, Toronto April 2018: Best Cinematography, Experimental Category. 2019 marks the International Year of the Salmon, and with that in mind the creative team of UNINTERRUPTED sees an outstanding opportunity to help heighten awareness of this iconic and essential species throughout the northern hemisphere and engage audiences through the lens of this unique work of art. We look forward to finding our new partners to allow the fish to swim in other locations.