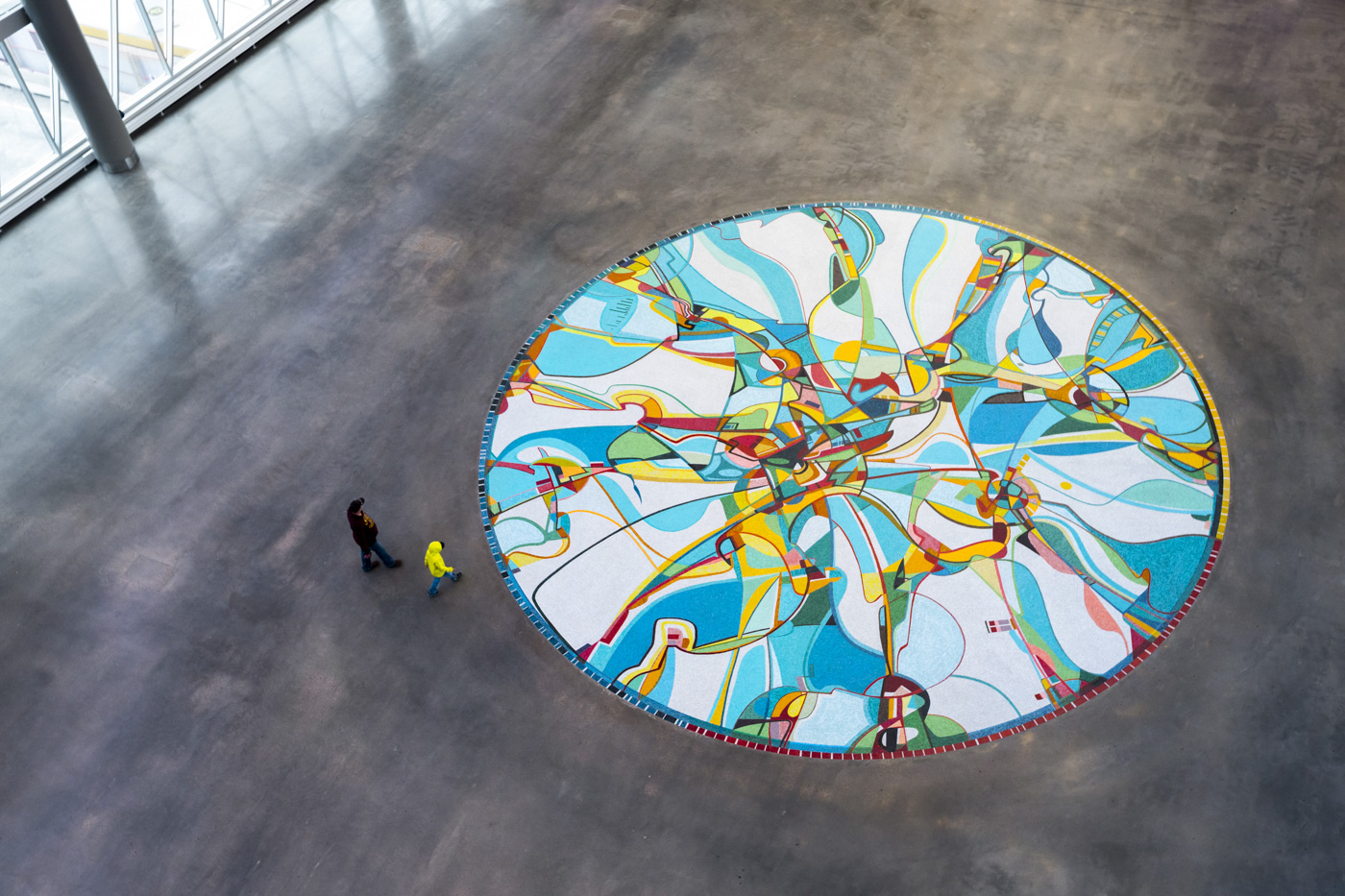 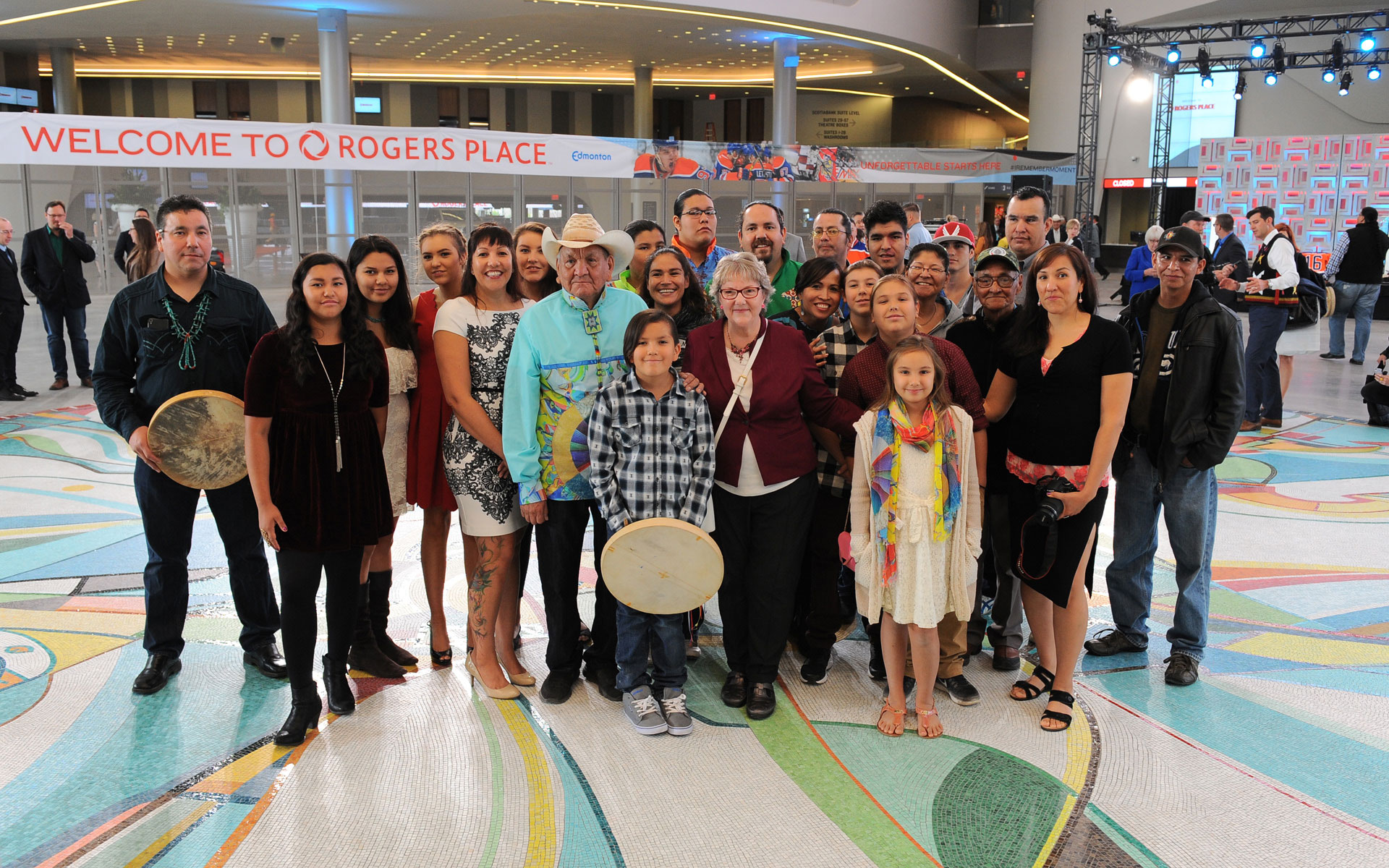 Tsa Tsa Ke K'e (Iron Foot Place) is the signature Percent for Art artwork for Edmonton's Rogers Place Arena. Created by acclaimed Canadian abstract painter Alex Janvier, the 1500 square foot smalti mosaic celebrates Edmonton's Indigenous community and history; the area's role as a gathering place over many millennia; and the city’s stunning natural setting. Inset within the floor of Ford Hall, the Arena’s main public area, the artwork welcomes visitors on arrival and is envisioned to be a backdrop for countless community centred gatherings.

As a municipally funded project, Rogers Place Arena fell within the purview of the City of Edmonton Percent to Encourage and Provide Art in Public Areas Policy (Percent for Art). The challenge was to commission works that not only enhanced the building design and architecture and the activities to take place within, but that would also pay tribute to the city while creating a strong “sense of place” within a new development.

Alex Janvier, a member of the Dene Cold Lake First Nation, a proud Albertan, and one of Canada’s most recognizable and prominent artists, (as well as a passionate Edmonton Oilers fan) was the obvious choice to create a timeless signature artwork for Rogers Place. Public anticipation for the final unveiling of this artwork was unprecedented and the work has been embraced by Edmontonians and visitors alike.

“The inclusion of an artwork of this scale, by an artist of Alex Janvier’s stature, represents a cultural coup and legacy for Edmonton. Placing this powerful Indigenous voice at the heart of Rogers Place transforms the space with a spirit that will enrich, inspire, and provoke those who visit.” Edmonton Arts Council Executive Director, Sanjay Shahani

From the beginning, this project was defined by its spirit of collaboration and enthusiasm. Working with the Edmonton Arts Council and Rogers Place stakeholders, Alex Janvier created eight concepts for consideration – the announcement of the artistic concept was accompanied by a community celebration that captured a sense of excitement for the public. His son, Dean Janvier, as project manager worked closely with the EAC, City of Edmonton, Oilers Entertainment Group and fabricator Mosaika Art Design as well as PCL Construction and trades to facilitate an efficient fabrication/installation process.

The expertise of Mosaika as artisans and technicians was critical to the success of this artwork. Their mandate was enormous: translating a small, flowing watercolour painting into a 1500 ft2 mosaic consisting of nearly one million smalti tiles in myriad hues and seamlessly integrating it within the concrete floor. The mosaic glows within its setting, lit by the massive windows, its colours offsetting the minimalist swoops and curvatures of the surrounding architecture.

This community-spirited process, meticulous attention to detail, and complexity resulted in intense media attention – stories focused on the artist and fabricator were warmly received, and the EAC experienced some of its most enthusiastic social media engagement.

The painting pays respect to the land… highlighting the colours of beautiful sky, the stories of the area, and clear waters from far mountains. The white areas depict the winter snowfalls and also the many days of clear skies… Then comes spring weather, delightful flowers, and farming begins... When the beautiful blue skies become covered with rainy clouds they bring a refreshing blessing to the earth life of plants, and other things flying or living on the ground… All roads lead to the area, Edmonton, a central destiny for all who came before, and who came after. Alex JanvÄ±er.