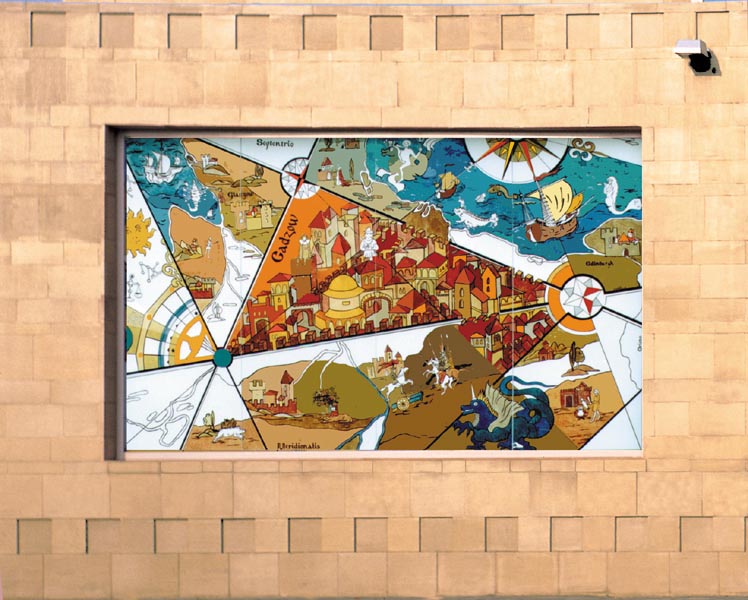 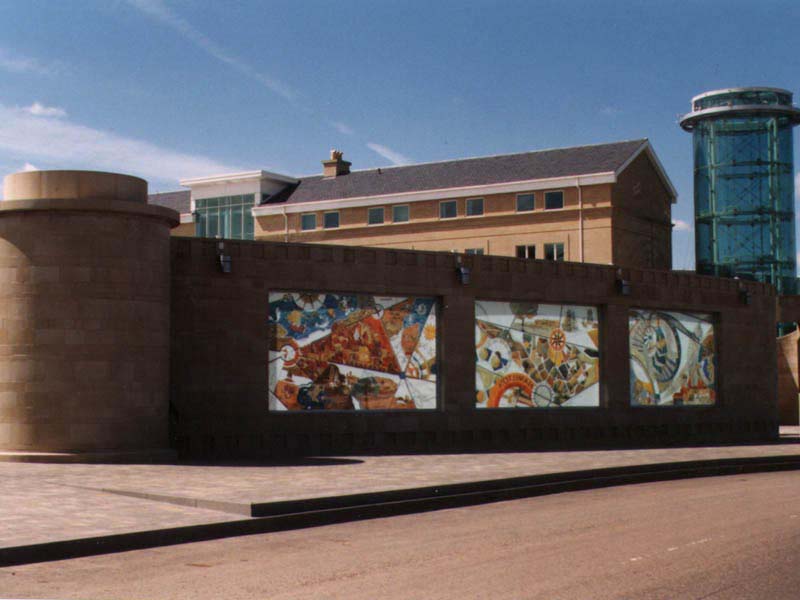 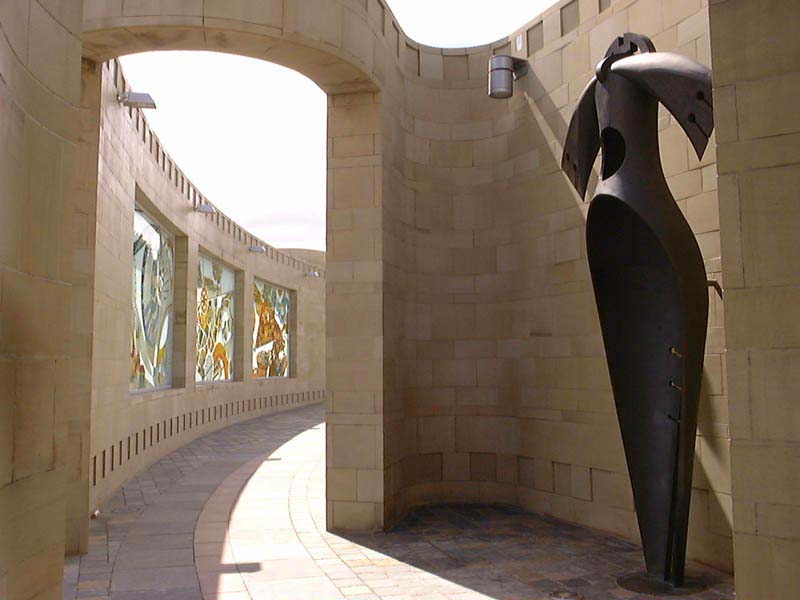 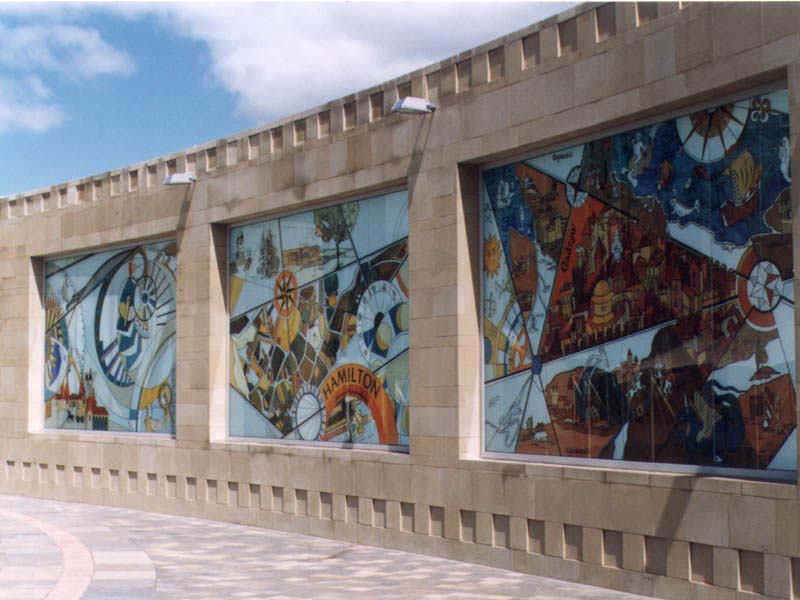 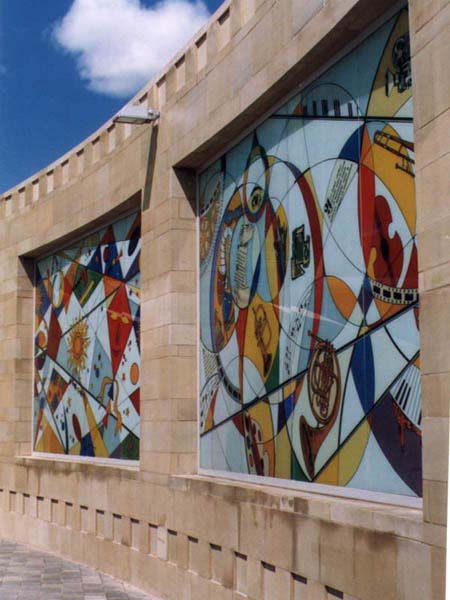 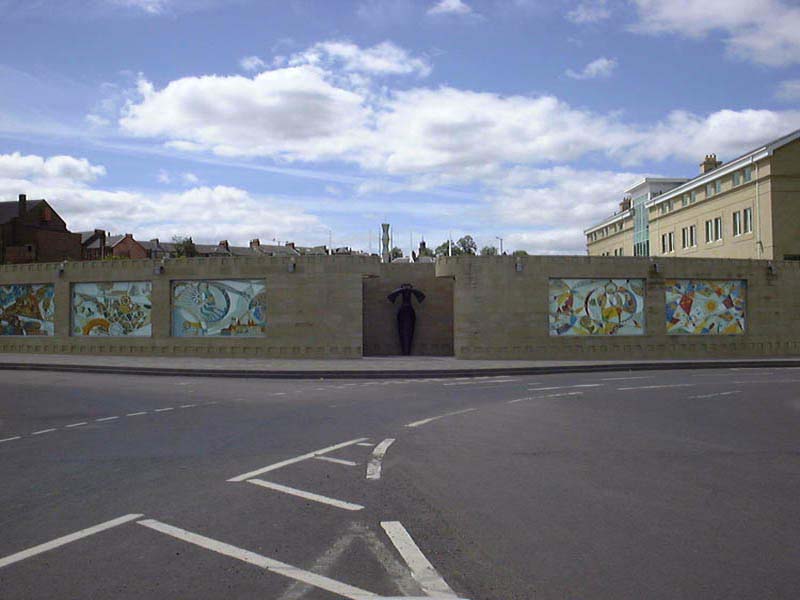 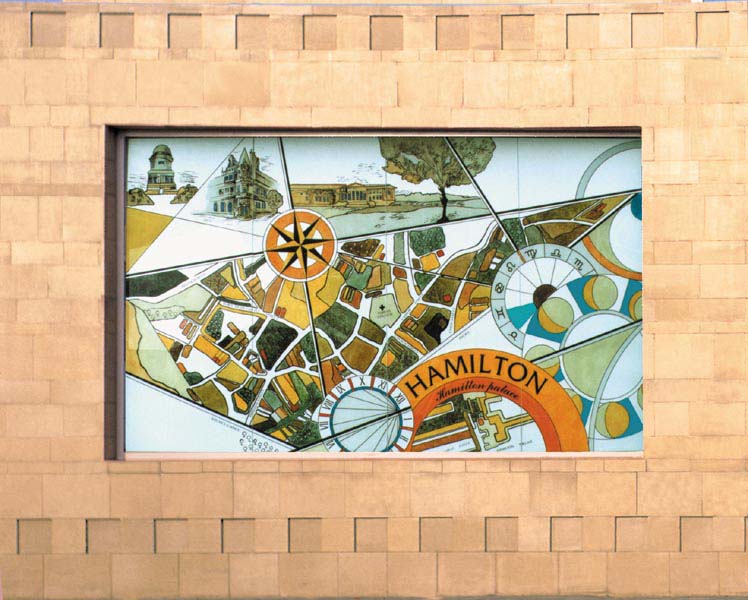 I would like to draw your attention over the projects for the whole conception of the virtuosos placed on both sides of TOTEMS. They represent flashes from the History of the town, its past, nowadays and future. This place is surrounded by entertaining centres, Historical landmarks and cultural institutions. That is the reason to which in both of the virtuosos connected with contemporaneous, the elements of the seven arts are being present, as the symbols of youth and dreams. The five topics are connected between each other in sense and visually. They have two main distances of perceives. Present in the two main dimensions of the place- the dimension of the buildings and the human dimension, and in that sense the degrees are actually the mediator, harmonizing these two dimensions. Coming from a distance the virtuosos are being viewed under one line TOTEMS by which the whole effect is for one horizontal painting, geometric composition with several centres and a lot of accents. The composition is circled towards the flexible centre/TOTEMS/ which is coming from the TOTEMS geometry, smoothly transforming into lines towards the two ends.

The distance of appreciation is from close, coming to the dimension of a human being, on which a lot of details can be seen, illustrative, pictured and graphic images carrying information for the scene of each one virtuoso. By this distance, the intercourse with more than one of the virtuosos is been excluded, which leads to big freedom and variety in the drawings.

The first virtuous is connected with the long past of Hamilton – at the time when it has been called CATZOW. Elements from maps of Middle Ages have been used, which charming naiveté gives the chance for the artistic treatment of the composition. The is build over the general Geometry taking hold of the other virtuosos clearly comprehended by thick white lines crossing the pictorial field. In the centre of the composition is placed a minimized model of the town, and in the other geometrical fields are placed the Geographical lay of the town. The Latin names /Meridionalis, Oriens, Septentrio/ are three from the duration of the world, which are a usual element in the maps, as the resets. The taking turns of picture fragments with graphic fragments are the main idea of the colour conception of the all object. The graphic fragments allow the virtuosos to have air and to be light. The main part of them is been worked to almost seen through so that the picture could be seen without any problem. The colours are mainly warm, contrasting to the elegant toughness of TOTEMS.

The second project is illustrating a latter map of Hamilton and is logical continuing of the first one. An original map from 1848 has been used of Hamilton palace and its surroundings. Since there was a special requirement to be accepted over the Hamilton palace, the place is especially marked even it is written. Graphics of other town landmark are been used. Here could be placed the emblem of the town, as texts, for example, poems, line.

The third project continues the Historical line again, based over the starting industry and techniques in Hamilton. The composition is more free and dynamic, build mainly from circles, crossed by lines. The circle is a synthetic image of the movement, the evolution and the progress. The dynamic of the image is in synchrony with the evolution of the material world that we live in.

The main moving force is the ever searching human soul aiming towards the imaginary – the stars, the cosmos and its rules. Totems and my sense are connected with it a lot. The image is opening in space, goes through Totems and then floats in the next virtuosos. Both virtuosos 3 and 4 are in direct contrast with Totems as its projects have been used, which are giving the illusion for cosmic spaces and tracks of stars and planets. The arts are connected between the visual and not visual world-existence and nonexistence. The symbols used for the kinds of arts are written in these directories, as they are influencing one another and they are inhibiting their own spaces. This virtuoso bears the everlasting harmony and joy which bring the art in the nonexistence.

Finally come to the hope and the happiness in life used as life motive in 5 glass drawings, which part are the children with their endless amazement towards everything in life in which they are living in.. their soul with its honesty, purity and happiness from everything alive – sun, air, and the moon is mixing with the wish to touch them. The wonderful children’s world is full of colours, smiles, fantasies and dreams.

The kite is the most imaginary toy. It symbolizes the fight of the human’s thought and the not overcoming wish to fly. The children are our future and they are the once that bring the light and the happiness in the world.

The project was created for 18 months. First the sculpture and the architectural part of the film were made, and then the stained glass windows in Scotland were made of armored glass for 6 months.
Belfast's McAllevin Architects' Office assisted in the selection of executive industrial companies: a foundry company for sculpture and a glass company for stained glass.