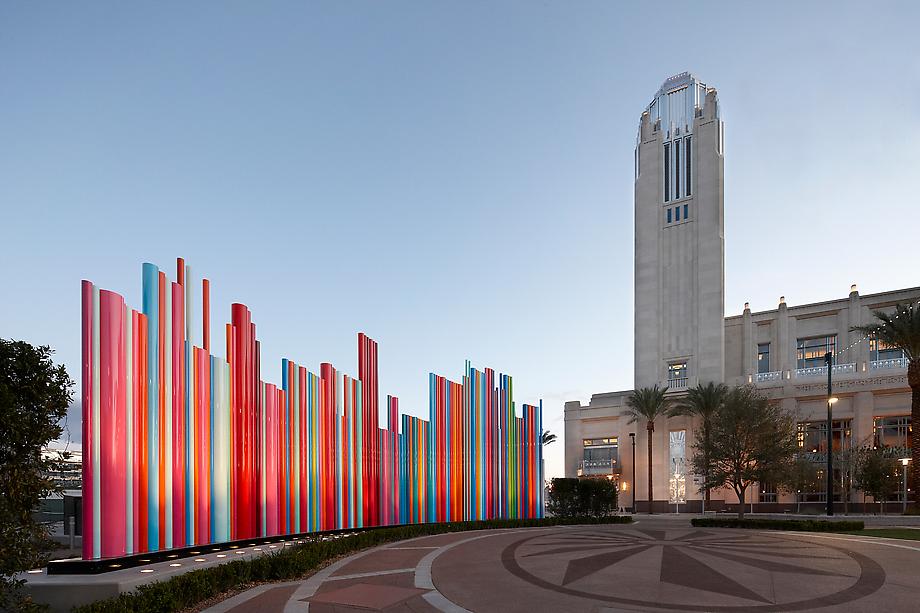 Smith Center of the Performing Arts

The Smith Center for Performing Arts was built from the ground up in 2013. Featured at the east end of the 2-acre Symphony Park, and serving as a frame to the outdoor stage, is a commissioned art piece by internationally recognized artist, Tim Bavington. The Smith Center approached Bavington and Moore Fine Arts to create a site-specific work that would draw visitors into the outdoor park area. Using 128 pipes, the overall dimensions measure 27'- 5″ x 86' – 8″ x 17'- 1″.

Integrating a site-specific artwork into the venue's property was of critical importance, considering that the arts were at the core of its purpose. The Smith Center wanted to highlight the rich local community of visual artists while also creating an iconic landmark for the space - which would act as a meeting point for guests of the Center. Since then, countless wedding photos, advertisements, commercial shoots, and group tours have taken place at the sculpture - and the Smith Center has become a marked destination for the arts in Las Vegas.

The Smith Center approached Moore Fine Art and the artist in the early stages of the building's development, which offered the artist an opportunity to create a wholly unique and architectural work for the space. Moore Fine Art acted as a liaison between artist, fabricator, and advisory board - which worked in tandem to achieve a project that was visually exciting and sound in engineering design. Several mock-ups were presented and voted on by the advisory committee, and the final result was cherished by all involved.

“Fanfare for the Common Man,” by American composer Aaron Copland, was selected by The Smith Center as the musical “muse” from which Bavington would pull his work. The composition was carefully selected by The Smith Center, as it resonated with its message to serve the community. Each pipe represents a single note in Copeland’s composition, and the colors are derived from a sign palette. The last unpainted pole represents a musical rest at the end of the composition. The Lights: The measure of time. Lights at every two feet represent a bar. 40 bars total.