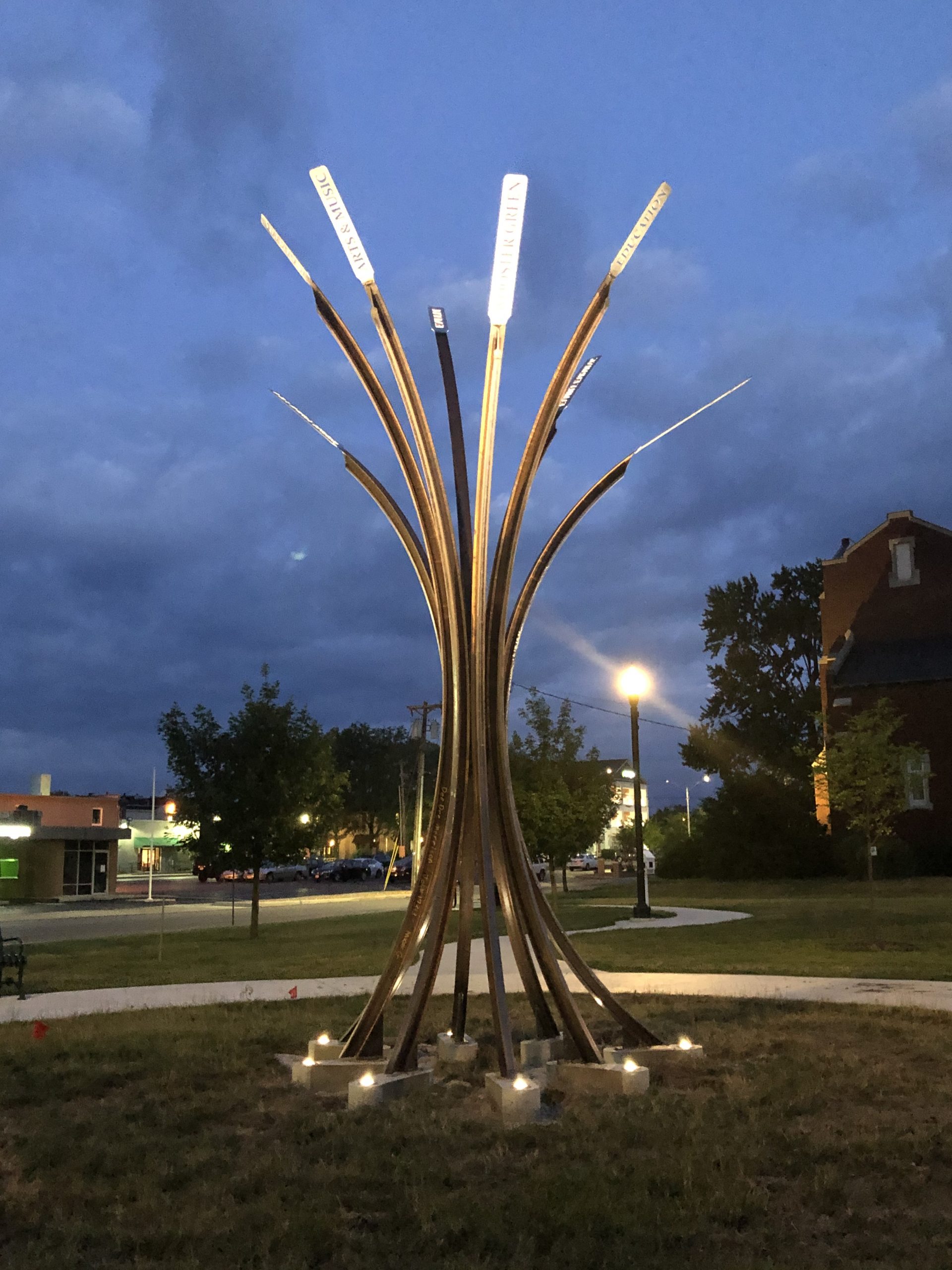 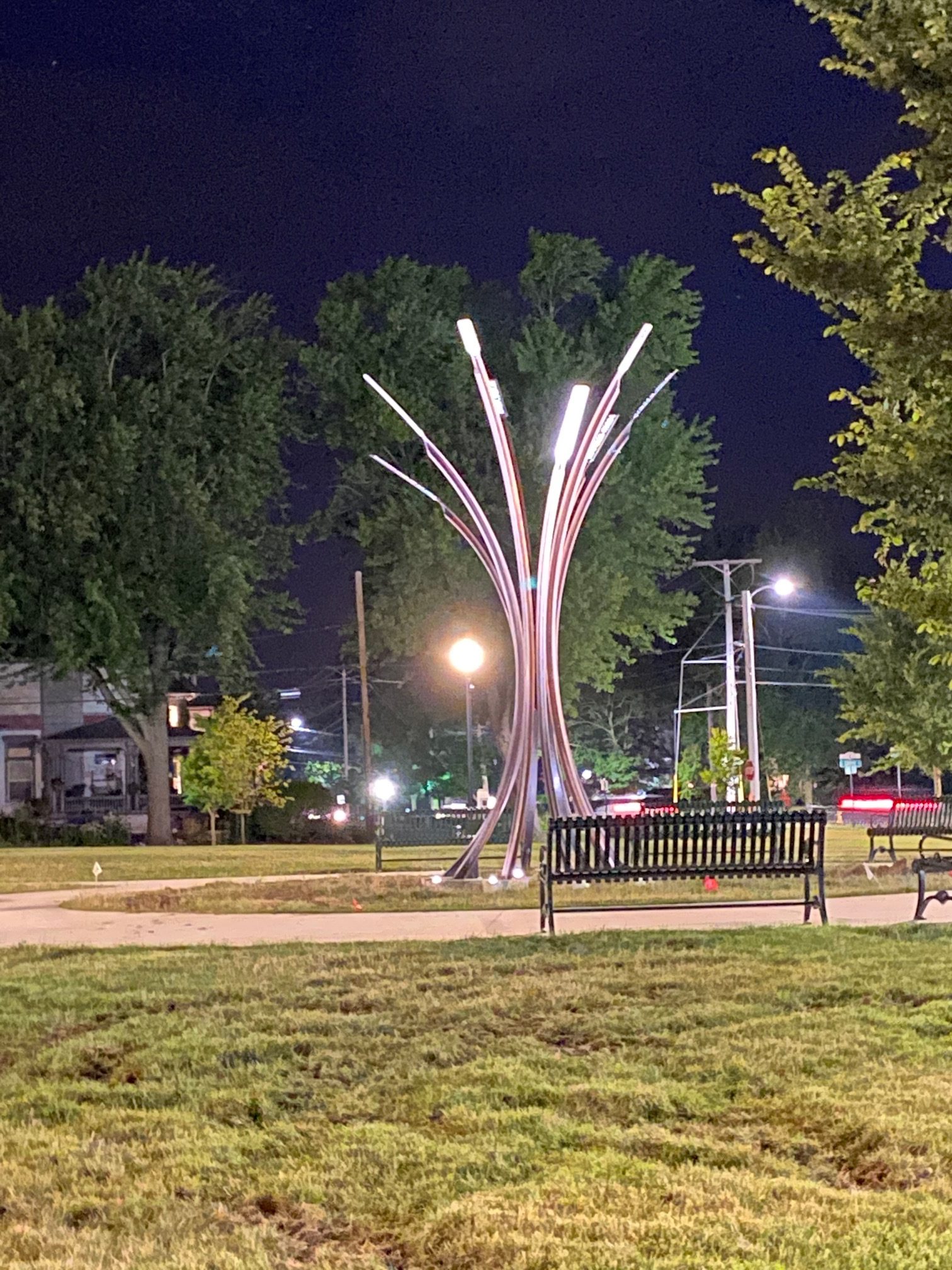 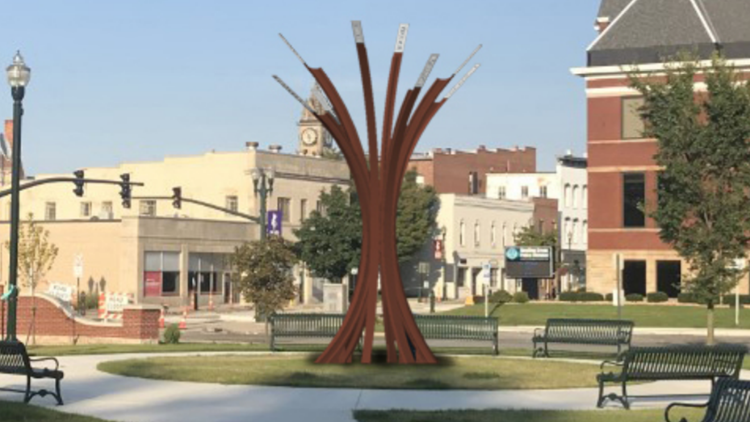 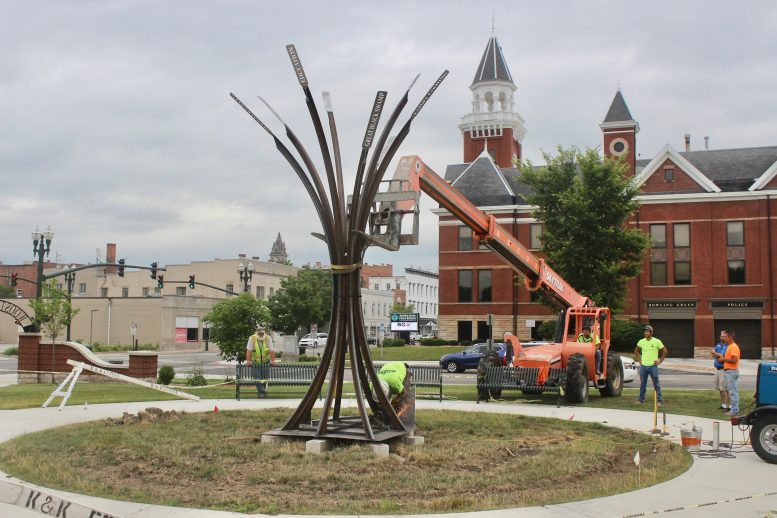 Client: The City of Bowling Green

Ties That Bind embodies the vital identity and values of the Bowling Green community, with eight historic rails soaring 17 feet in the air. Wooster Green is one of the most visible and historically significant parcels of land in the City and the sculpture becomes the focal point, creating the opportunity for people to rediscover Bowling Green and the important natural history of the region.

It all began about 10,000 years ago as the mile-high glaciers slowly receded north, scraping and gouging the land in its retreat. The end of the Wisconsin Age gave birth to the immense, freshwater treasure known as the Great Lakes. Most of the lake’s shore rose above the water, but about a 30 mile stretch on the southwestern Lake Erie shore did not, creating the Great Black Swamp – one of the most famous wetlands in early historic United States. Centuries ago, the area was a wild expanse of wet forest and marsh stretching across a million acres. And those marshes were legendary – perfect for waterfowl. Every spring, billions of birds sweep north to northwestern Ohio, driven by ancient instincts to return to their breeding grounds. The Wooster Green rails soaring high in the air evoke the feeling the wetland grasses were birds found refuge in the annual migration flights.

Wooster Green is the site of a former public school that was demolished. Situated between downtown and the residences in the Boomtown Historic District, the land of Wooster Green has served as the heart of the community. The goal of the public artwork was to celebrate the pillars of the community that built Bowling Green.

Wooster Green’s sculpture reflects the identity and values of the Bowling Green community. Each of the eight historic bent rails of differing lengths is topped by words signifying key elements of Bowling Green’s history and development and its place in Wood County.

Our story began 10,000 years ago when the glaciers retreated and left an expansive wetland known as the Great Black Swamp. The sculpture is inspired the billions of birds that used the flight way, driven by ancient instincts to return to their breeding grounds. Though the cacophony of sound can no longer be heard overhead, the rails soaring high in the air evoke the feeling of the wetland grasses where birds found refuge during their annual migration.

Centuries ago, the area around Bowling Green was a wild expanse of wet forest and marsh stretching across a million acres. Those marshes were legendary and perfect for waterfowl. Every spring, billions of birds sweep north to northwestern Ohio, driven by ancient instincts to return to their breeding grounds, raveling vast distances, navigating with remarkable precision, performing astonishing feats of endurance as they spanned the globe…a huge phenomenon and yet mostly invisible. It is visible only in places where quirks of geography forced the birds to concentrate in unusual numbers - Ohio is unique in being one of those places. In-depth knowledge of the regions natural environment inspired and directed the art pattern and LED sculpture. At night, the sculpture comes alive with added dimension as the LED lights interact in a cacophony, encouraging participation and curiosity about environmental stewardship. The sculpture was inspired the billions of birds that used the flight way for generations. Though the cacophony of sound can no longer be heard in the spring in the fall, the sculpture stands as a testimony of what existed before and a remembrance of the importance that our natural biological systems play in the health and wellbeing.