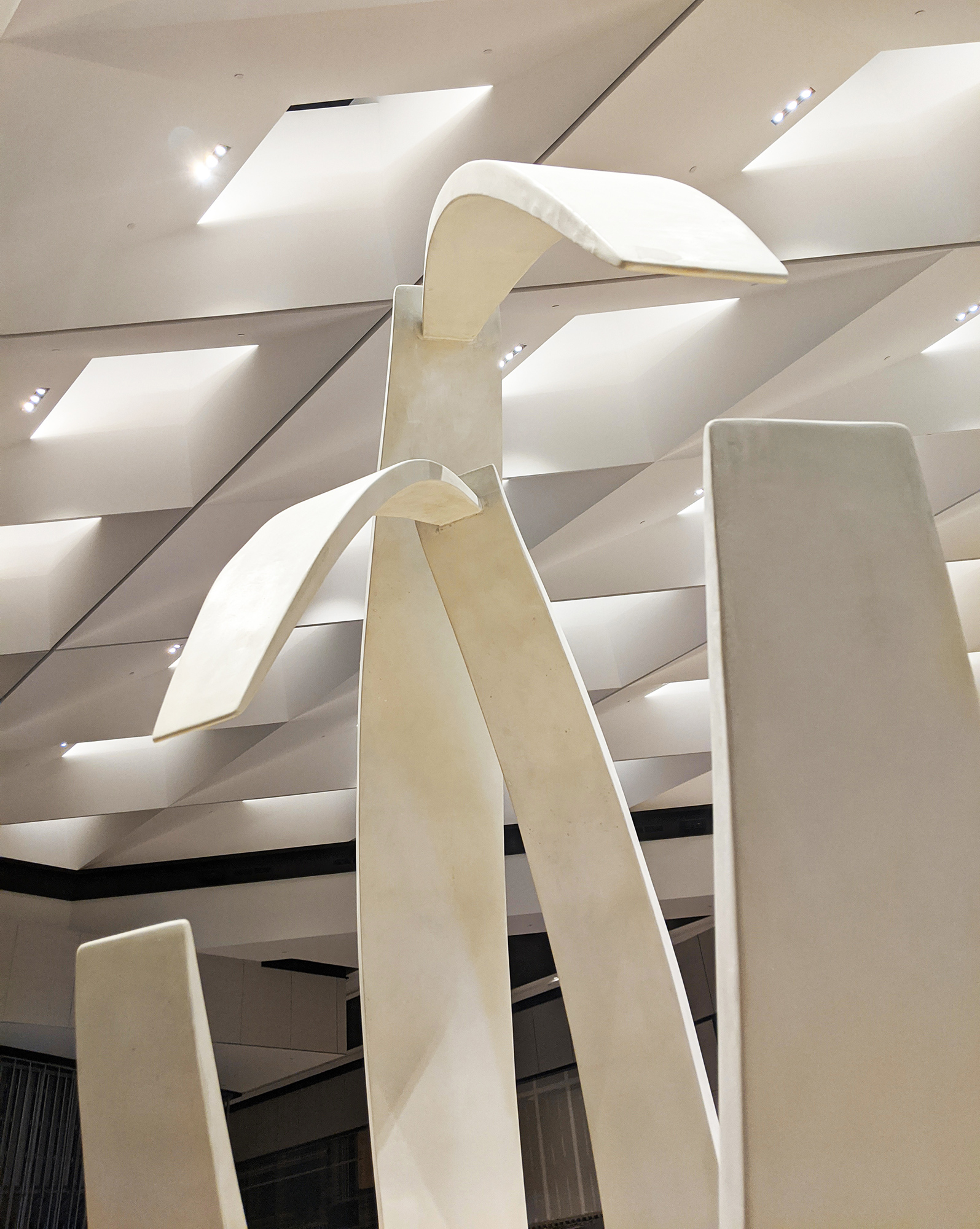 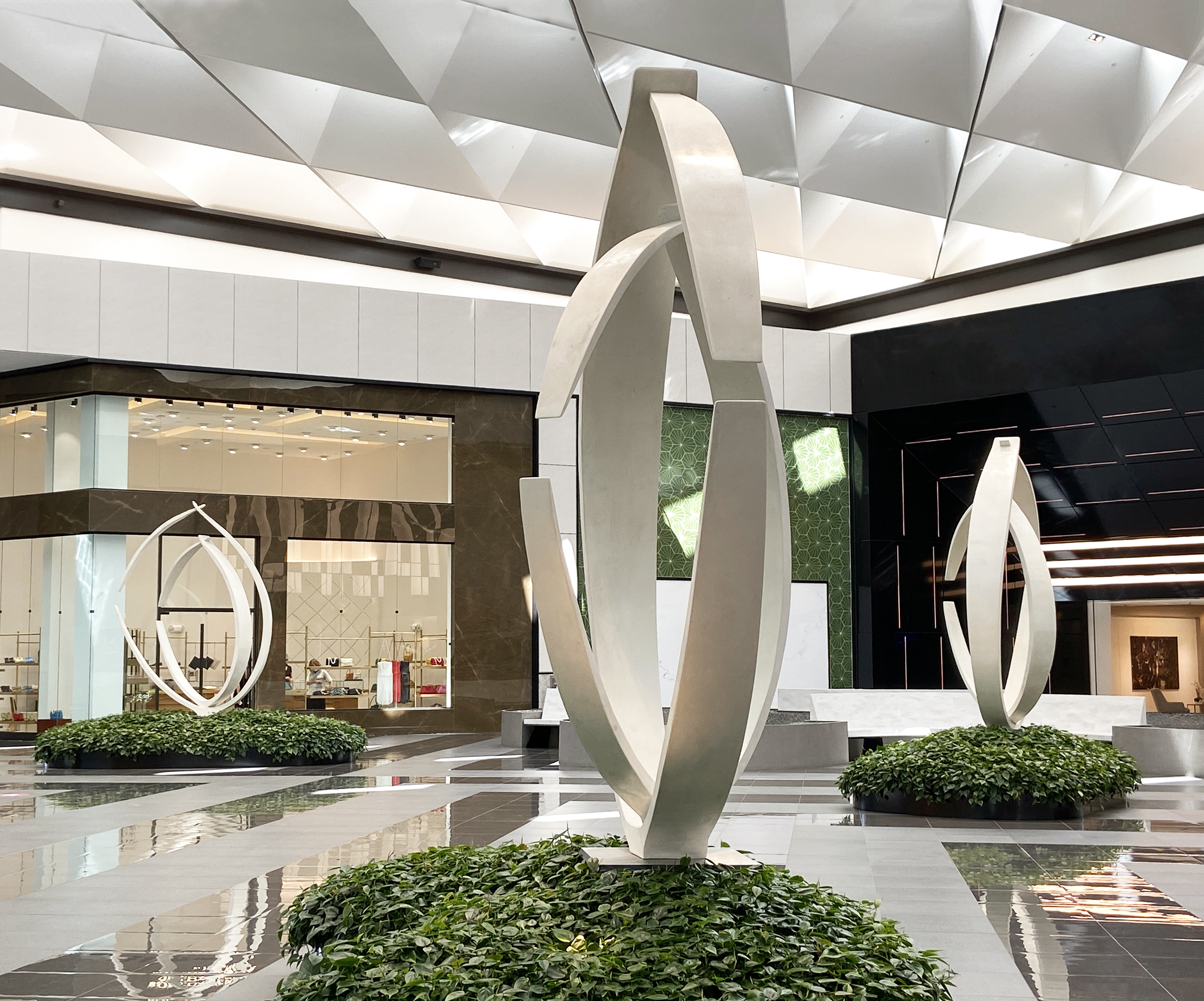 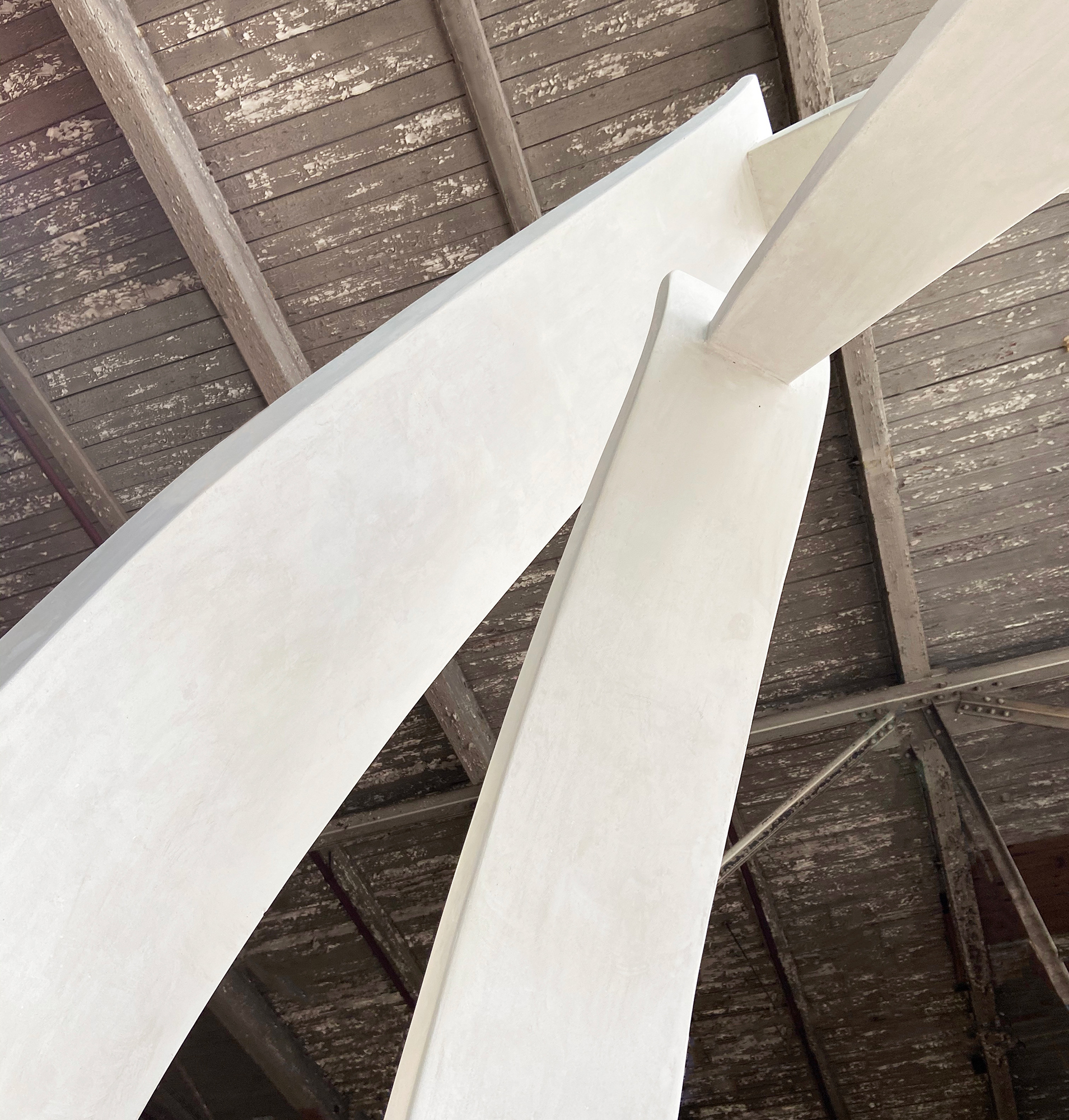 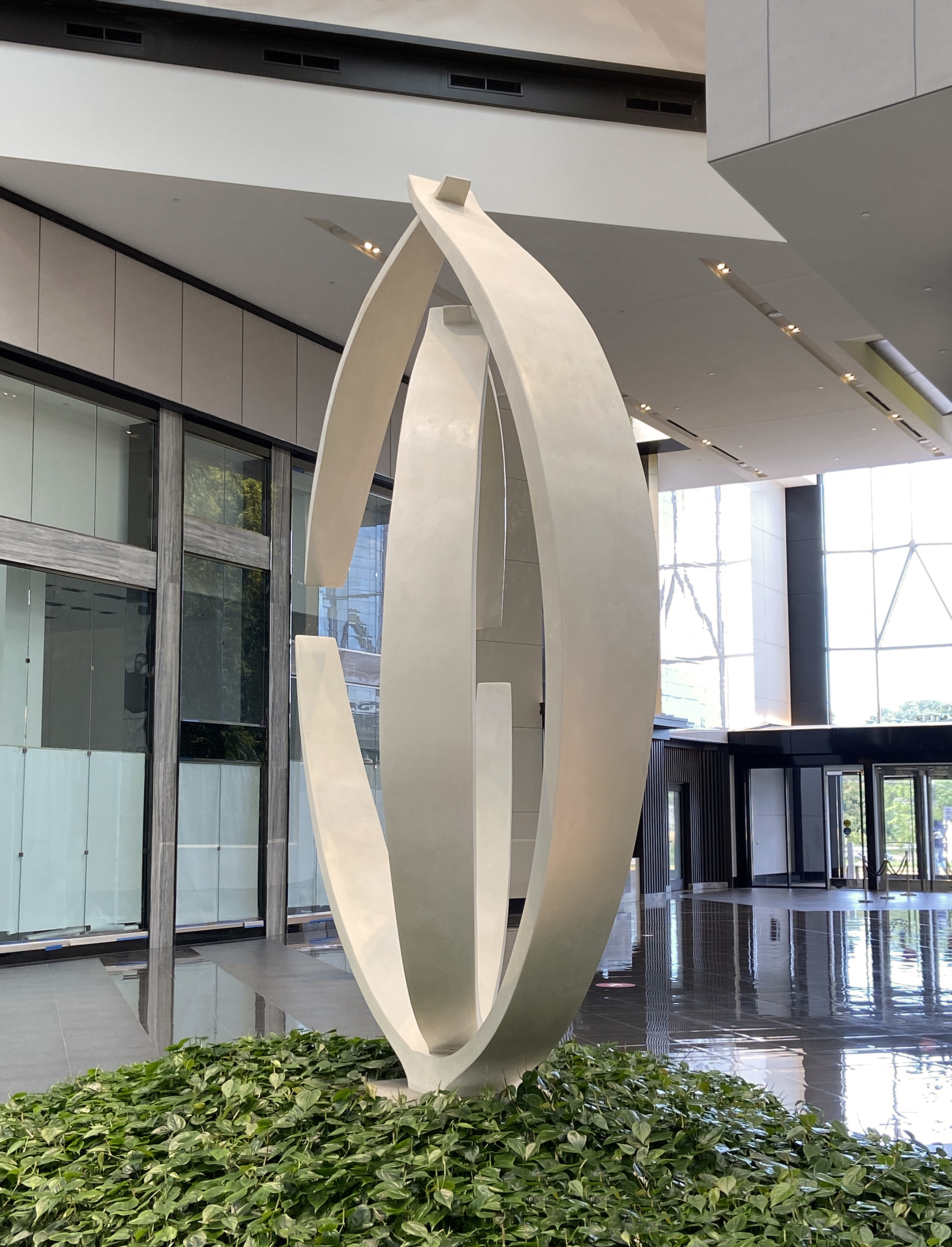 A trio of sculptures set in conversation with each other, ‘Three Enclosing Forms’ fills a large public space in a new commercial building in Hackensack, NJ. My client’s aim was to bring a unique, innovative, and iconic work to their project, to introduce a focal point that would draw people to the sitting areas around it, and activate the space. The sculptures each stand 10.5 feet tall, their parts intersecting in cantilevered joints, standing in equilibrium on small feet (all securely attached for safety). The three sculptures are comprised of the same components, but I distinguished them from one another by changing the relationship of the inside to the outside form.

Instead of metal, I proposed to my client that they be cast in ultra-high performance concrete (UHPC), a material with amazing structural and aesthetic properties, that I had satin-polished to gently reflect the ambient light in the space. The material was a perfect fit for my vision for the works, as it’s understated, not distracting from the forms themselves, while also emphasizes the sense of a heavy material transcending its mass to achieve a moment of near-weightless poise, pushing the limits of both material and engineering.

My client wanted a trio of substantial, yet graceful forms for the large public space at the center of their new building. From the start, they made clear that it should be a “museum-caliber” work that would stand the test of time, while also being complimentary to the architecture and interior design of the building. The site for the work is a relaxation area for visitors, with seating, a water feature, and indoor plantings. It sits at the confluence of three major corridors, so I carefully considered site lines and wayfinding from each direction. All of this played into my design for the sculptures, their scale, form, material, and placement.

I wanted to create a very organic form to contrast with the geometric architecture and ceiling, while connecting with the indoor plantings and water feature. I call them ‘Enclosing Forms’ because they suggest a gesture like an embrace — a quiet, introspective moment, which helps counteract the at-times frenzied feeling of a busy commercial building.

Lastly, because the sculptures would be in contact with countless visitors’ hands, as well as irrigation water, they had to be weather-proof, resilient, and low-maintenance, and UHPC’s micro-granular structure and hydrophobic coating excels in each of those qualities.

From start to finish, this was a close-knit collaboration between the client, project manager (Cynthia Byrnes Contemporary Art), fabricator, engineer, installation team, and the building's general contractor. I relied on a mix of physical and digital (2D and 3D) models, plus virtual placements and multiple material samples to communicate my ideas to the team. The material, UHPC, is relatively new — and this was my first time working with it — so the engineer, fabricator and I had to work particularly closely to ensure that the final design was not only true to my vision, but would meet the client’s structural requirements, while being feasible for fabrication.

Cynthia Byrnes, the project manager, was instrumental both on a high level (such as ensuring that the client’s needs and my vision were aligned), and on logistics (including making sure that the works, when delivered, could actually fit through doorways that were smaller than the dimensions of the finished sculptures). My fabricator also went the extra mile by crating and driving the finished works from the foundry to the site, and helping to oversee installation, as in-depth knowledge of this material is key to avoiding accidental cracks during while moving and un-crating them.

While the sculptures each stand on a small foot atop landscaped mounds, there was much thinking that went into how to achieve that clean, effortless appearance, especially given that each sculpture weighs approximately 1,250 pounds. First, concrete pedestals were poured to the engineer’s specifications. That had to happen months before the works were installed, during the building’s construction. Four anchor bolts were cast into these pedestals, with ends protruding above the top surface, and we placed a series of thick steel plates onto these, separated by heavy-duty nuts, which allowed the stainless steel plate on top to be adjusted in each dimension, to ensure that it was perfectly level at the time of installation. Lastly, I want to mention the reason for leaving out my client's name here. We installed the works at the end of February 2020, and the grand opening was to take place at the end of March. Due to Covid, the building did not open then, and only finally had a 'soft' opening many months later. The client is still hoping to have a grand opening and 'unveiling' of the works, and has asked that identifying names not be used in public, at this point, so that their PR push won't be undermined.