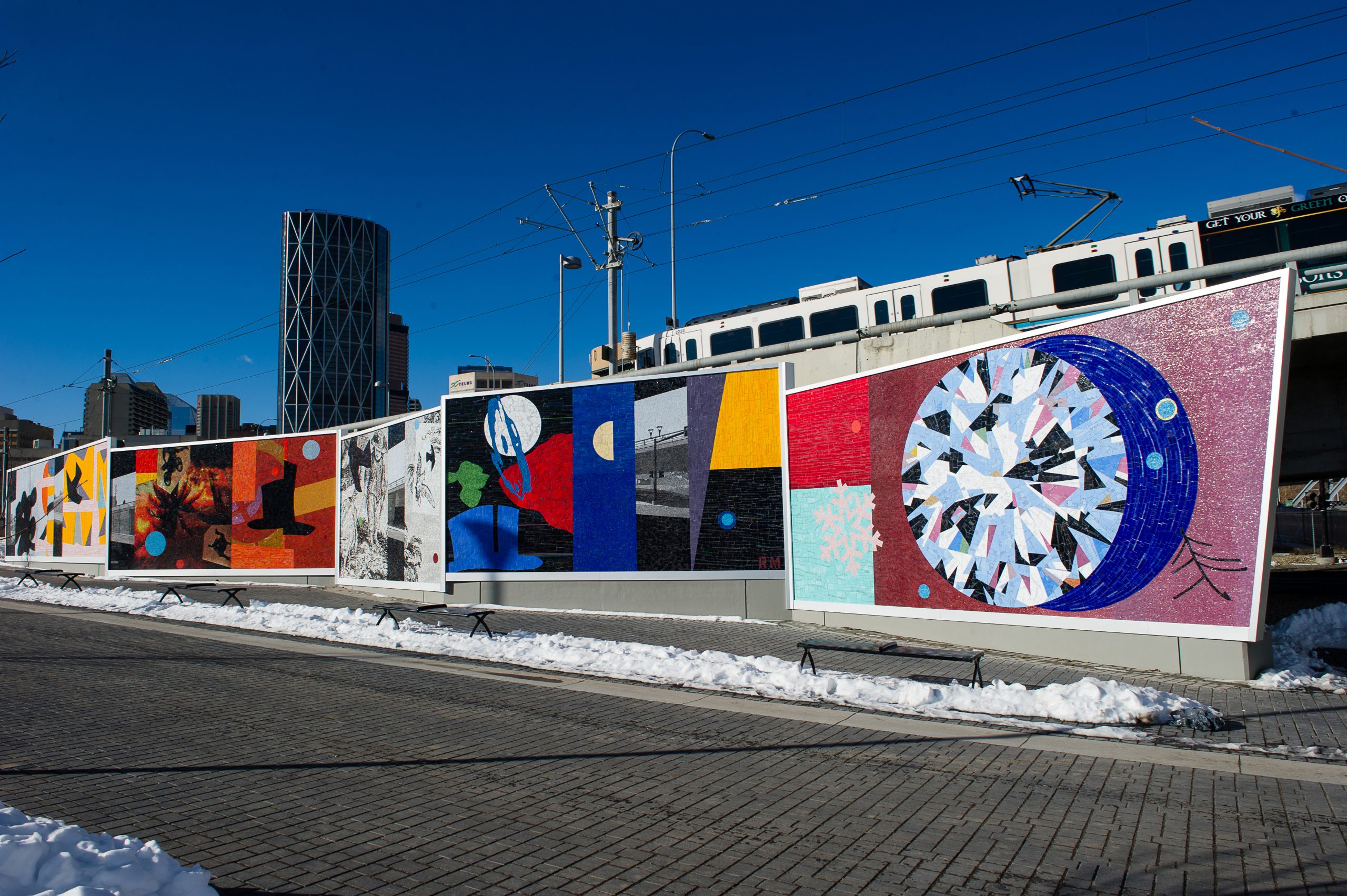 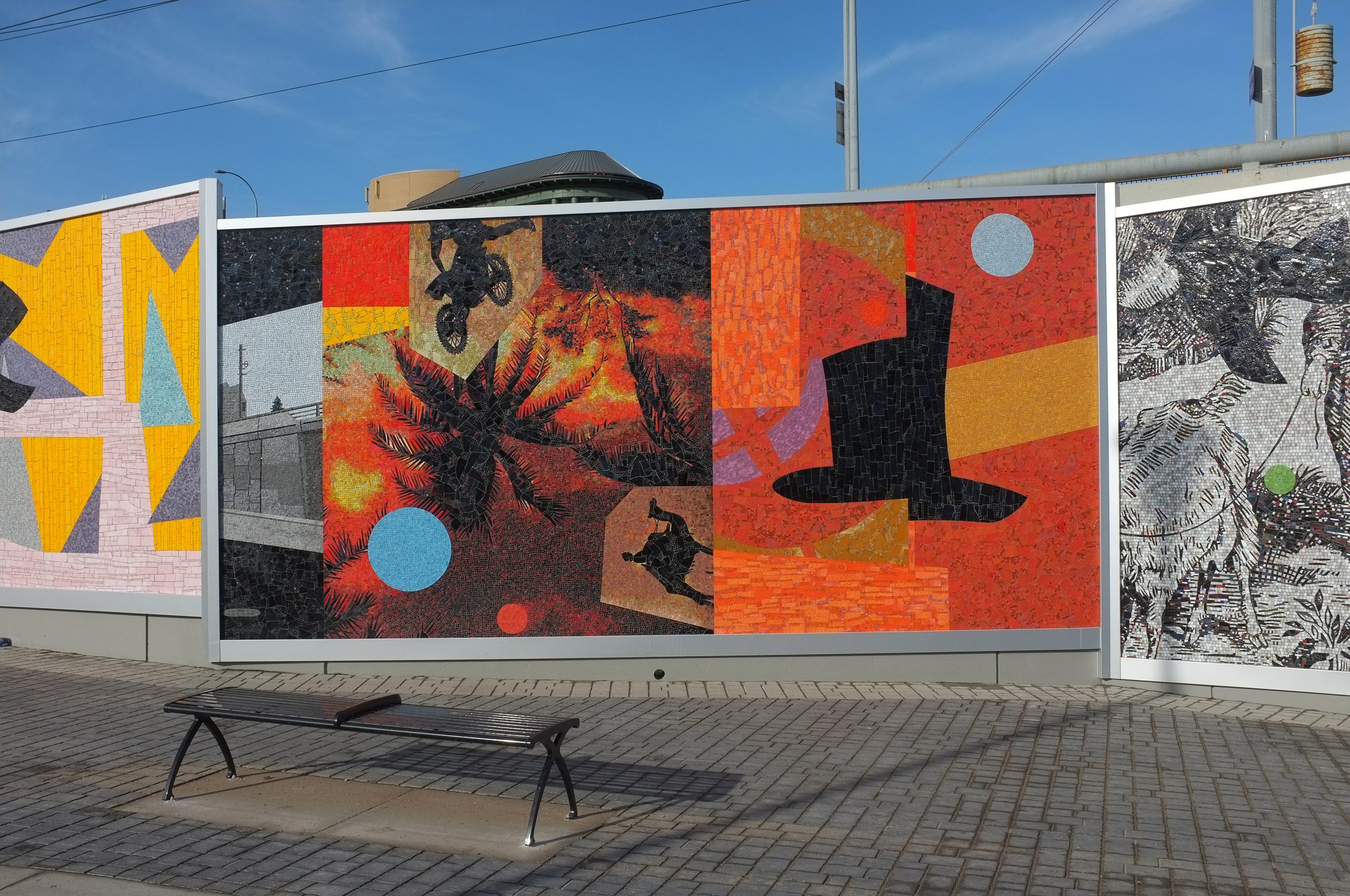 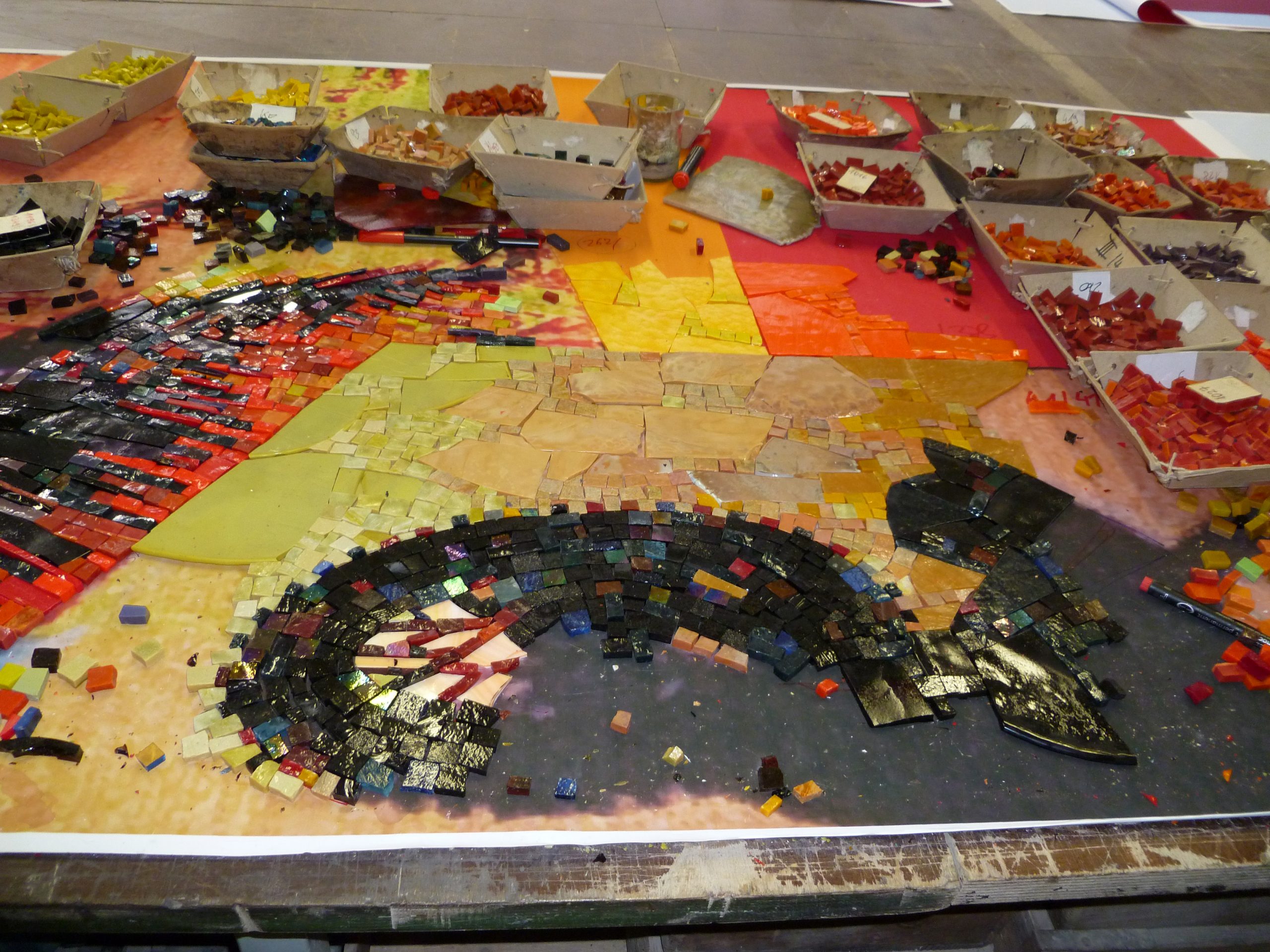 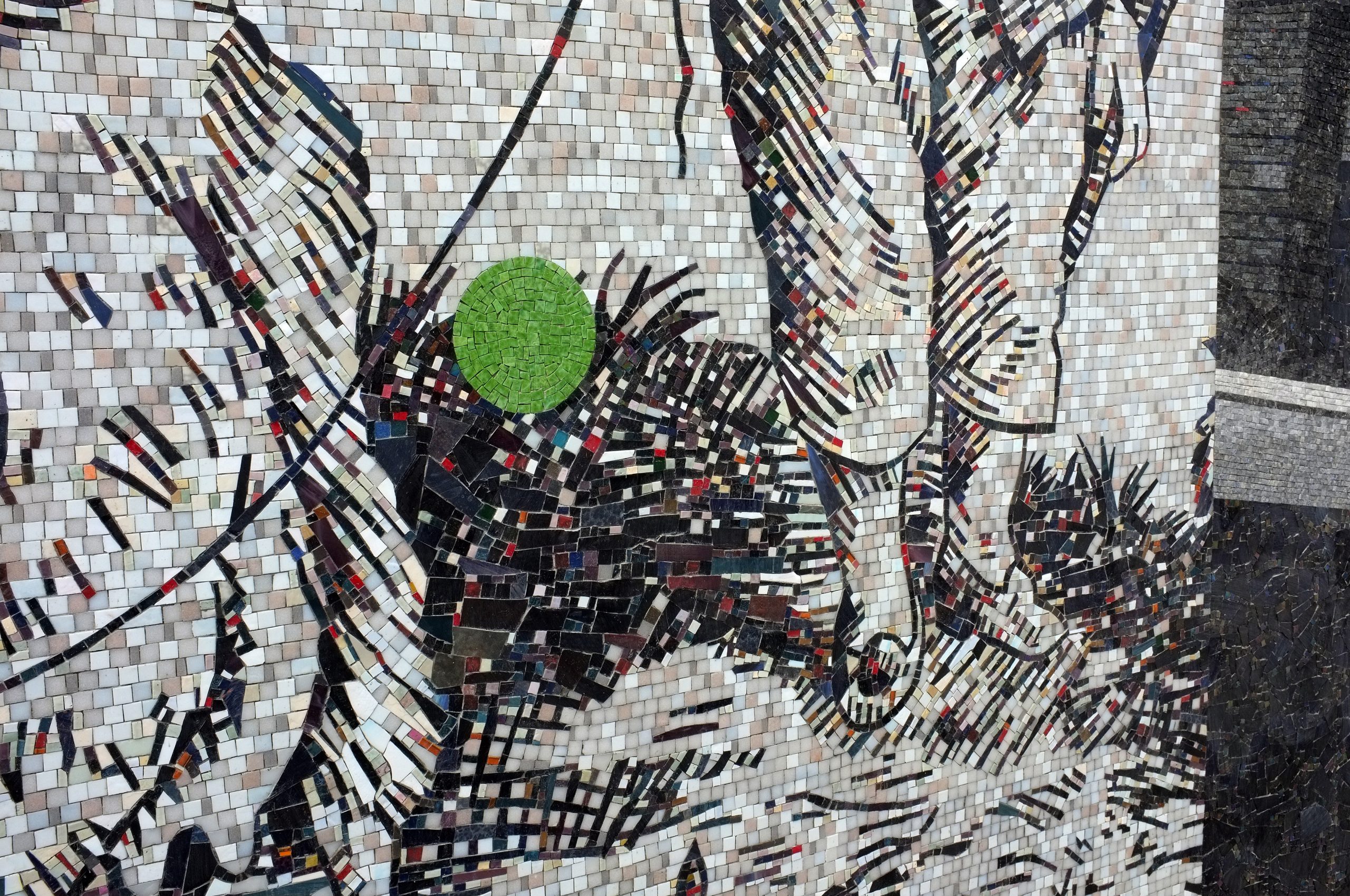 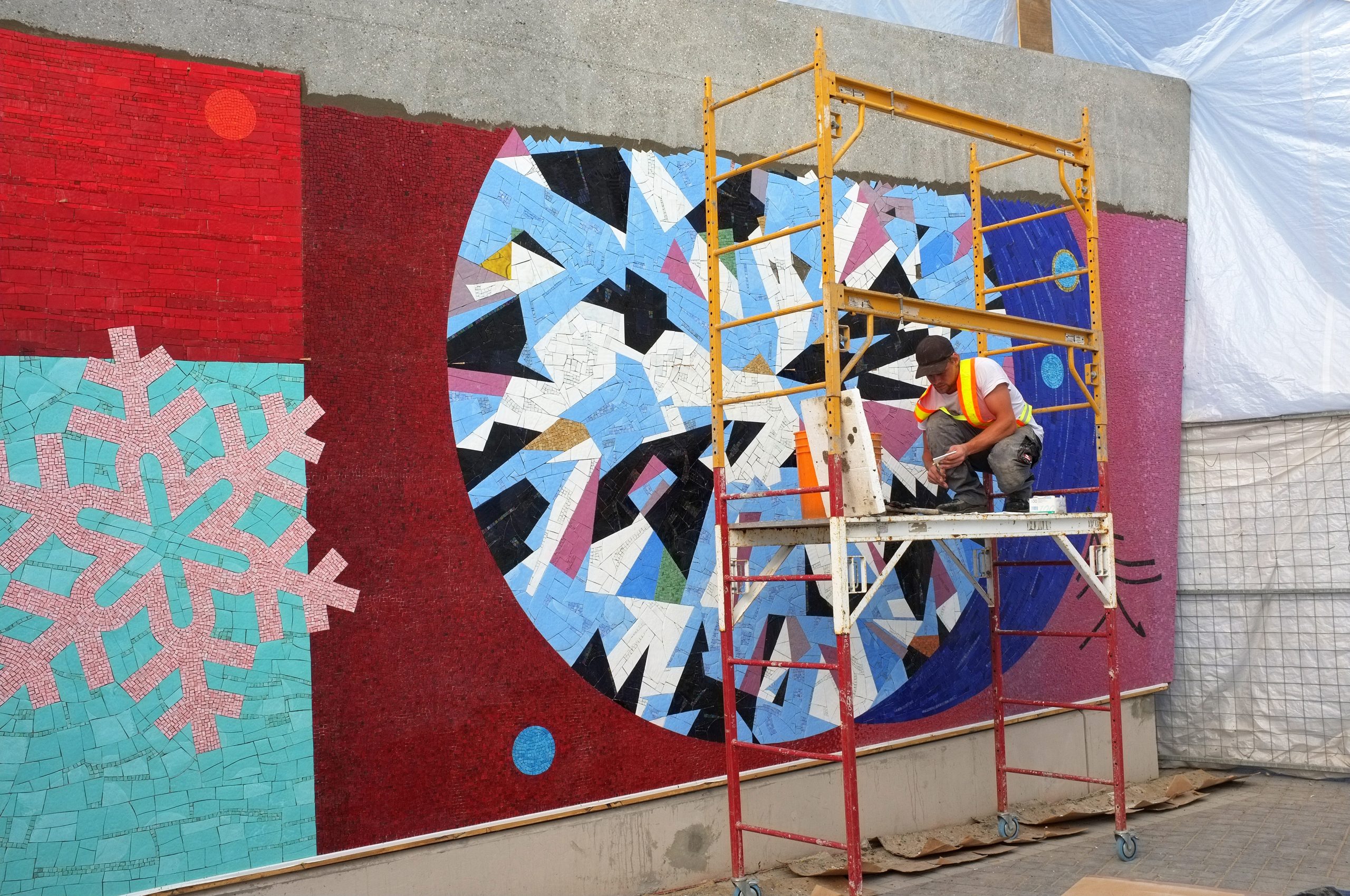 THESAMEWAYBETTER/READER is a public art installation for the East Village Redevelopment Project in downtown Calgary. Five articulated panels run over 110 ft long. With approximately 12,000 square feet of glass and stone mosaic, this is the largest outdoor mosaic in Canada. The mural has five free standing accordion panels that are sited adjacent to a light rail transit flyover.

Calgary identified a significant revitalization project for East Village, located directly behind City Hall, very near the confluence of the Bow and Elbow Rivers, near Fort Calgary, the site of the founding of the city, a significant tract of downtown land (48.5 hectares). Calgary Municipal Land Corporation was created to implement a public infrastructure program that facilitates the reclamation, redevelopment and revitalization of the area. Believing public art shapes community identity and creates opportunities for dialogue and interaction in public spaces, it set a goal to use public art as a place making tool . The East Village has been master planned to be the most walkable, liveable and connected district within the downtown core. Pedestrian focused streets in the village are designed to improve the public realm and quality of life for residents, visitors and commuters. This mural defines a pedestrian street that runs adjacent to a light rail transit flyover and leads to River Walk, an inviting treatment of the river's edge. THESAMEWAYBETTER/READER is one of the first installations of significant public art in the area and stands as one of the first signs of development in this dynamic project.

Moppett's initial proposal took the form of a collage of paper, photograph and fabric that he replicated as a model which earned him the commission. Through every step of the project, from the changes of siting through the facilitation of the installation, lighting and unveiling, the client, CMLC, and the public art competition facilitator, TrepanierBaer Gallery, were involved and supportive, helping to make the project better and grander. Digital files of each of the five panels were sent to Mayer of Munich. Over a year, a team of more than eight artisans at the Mayer studio assembled the work to size with over 900,000 handcut Venetian and Mexican glass tesserae and stone mosaic. Moppett made three trips to Munich during that year. As a resident artist, he collaborated closely with the highly trained artisans, determining the most effective palette of colors, the textures and patterns of different courses, and coming to understand the variations that could further amplify the original designs. Sections were carefully cut out, numbered and shipped to Calgary where Moppett oversaw two master craftsmen as they assembled the work over five weeks, bottom to top, like a jigsaw puzzle.

THESAMEWAYBETTER/READER is a large and visually complex "zipline" of colour that references Calgary as a dynamic multi-faceted narrative. Starting from the south and moving north toward the Bow River, each of the five panels tells a story of genesis. The dream story tells of the genesis of a place and neighborhood, of a city and province, delivered in the artist's unique manner, which is abstract, poetic, ambiguous, open, joyful, colourful and playful. This piece was made by Ron Moppett, a senior and internationally exhibited Canadian artist.