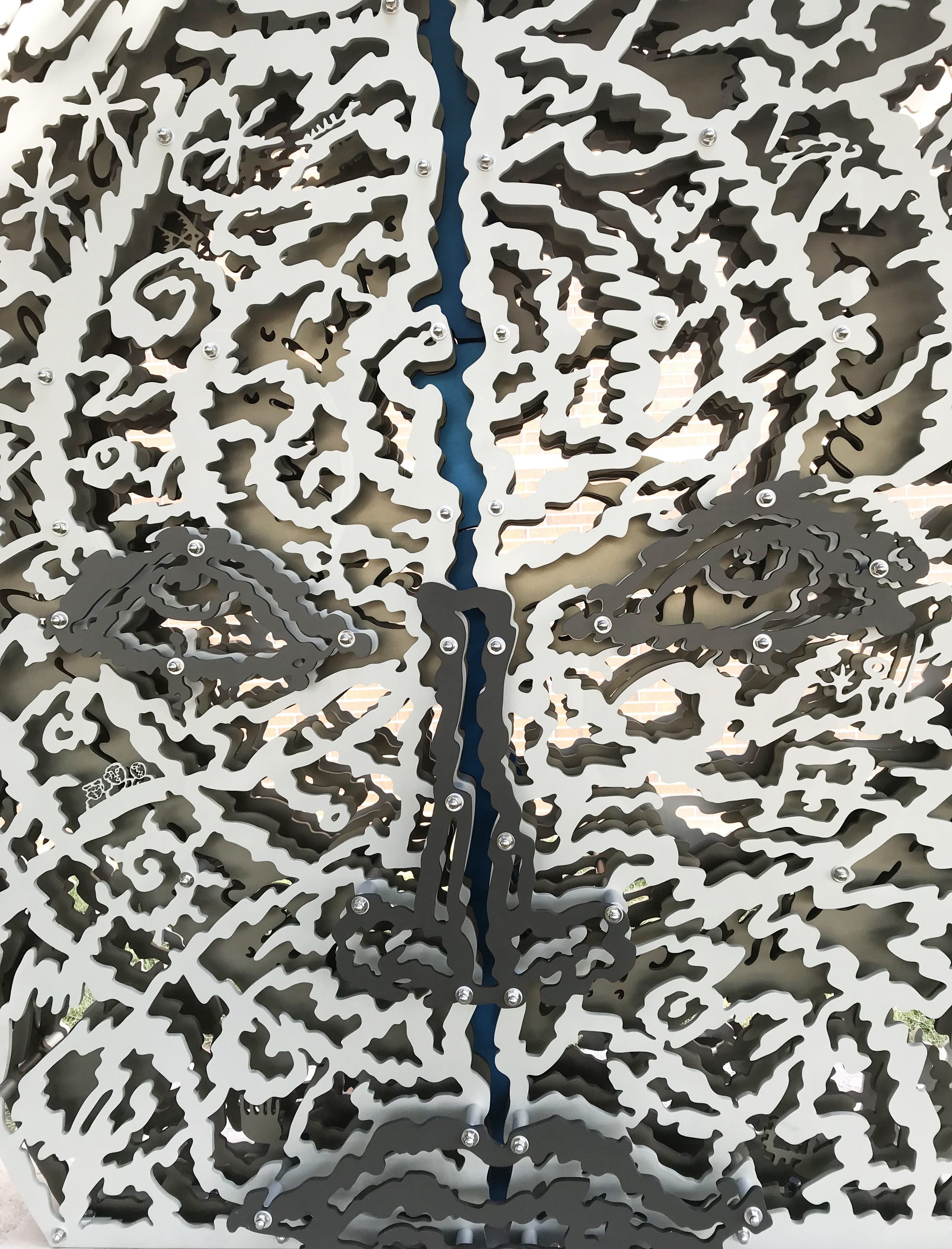 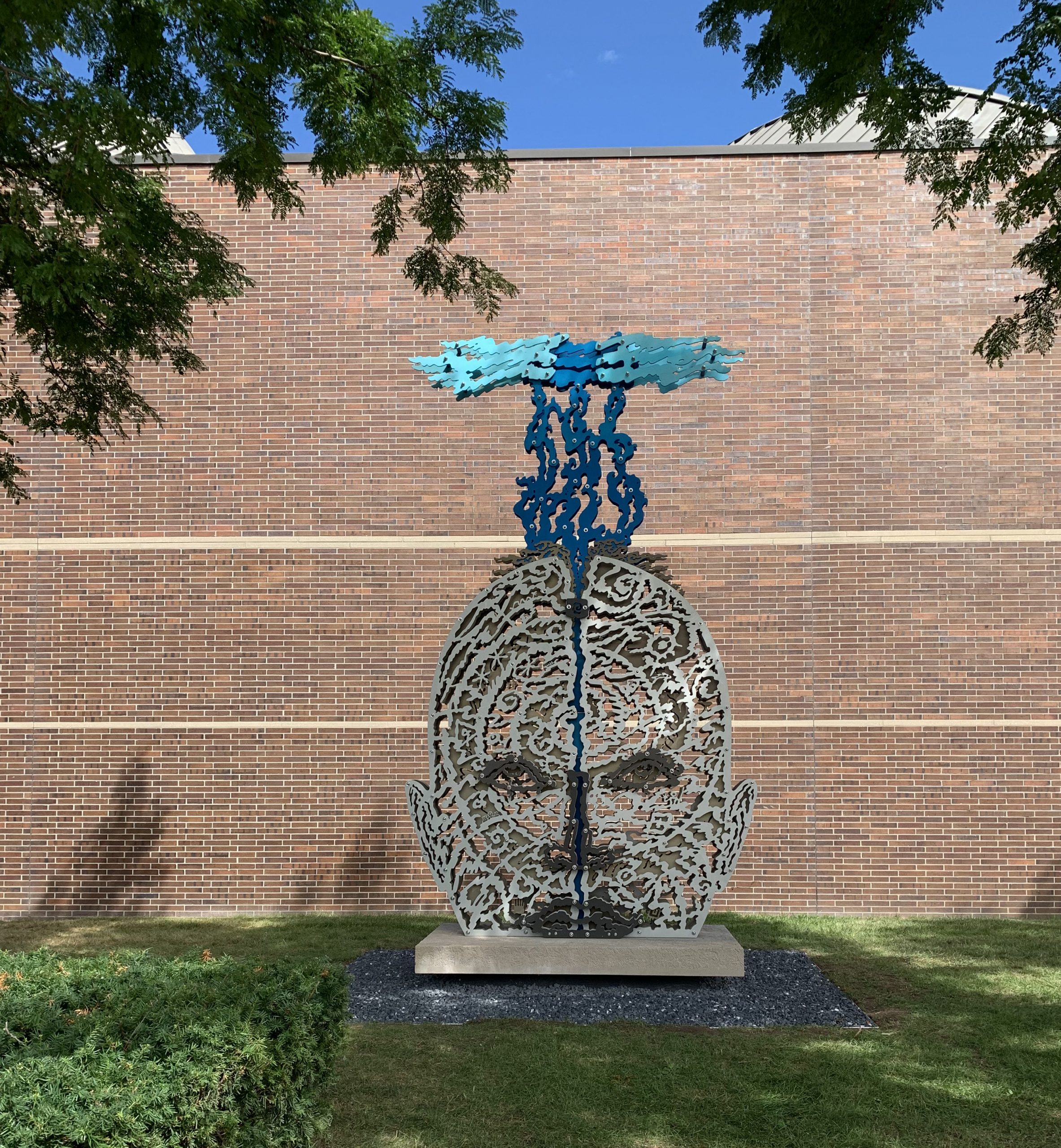 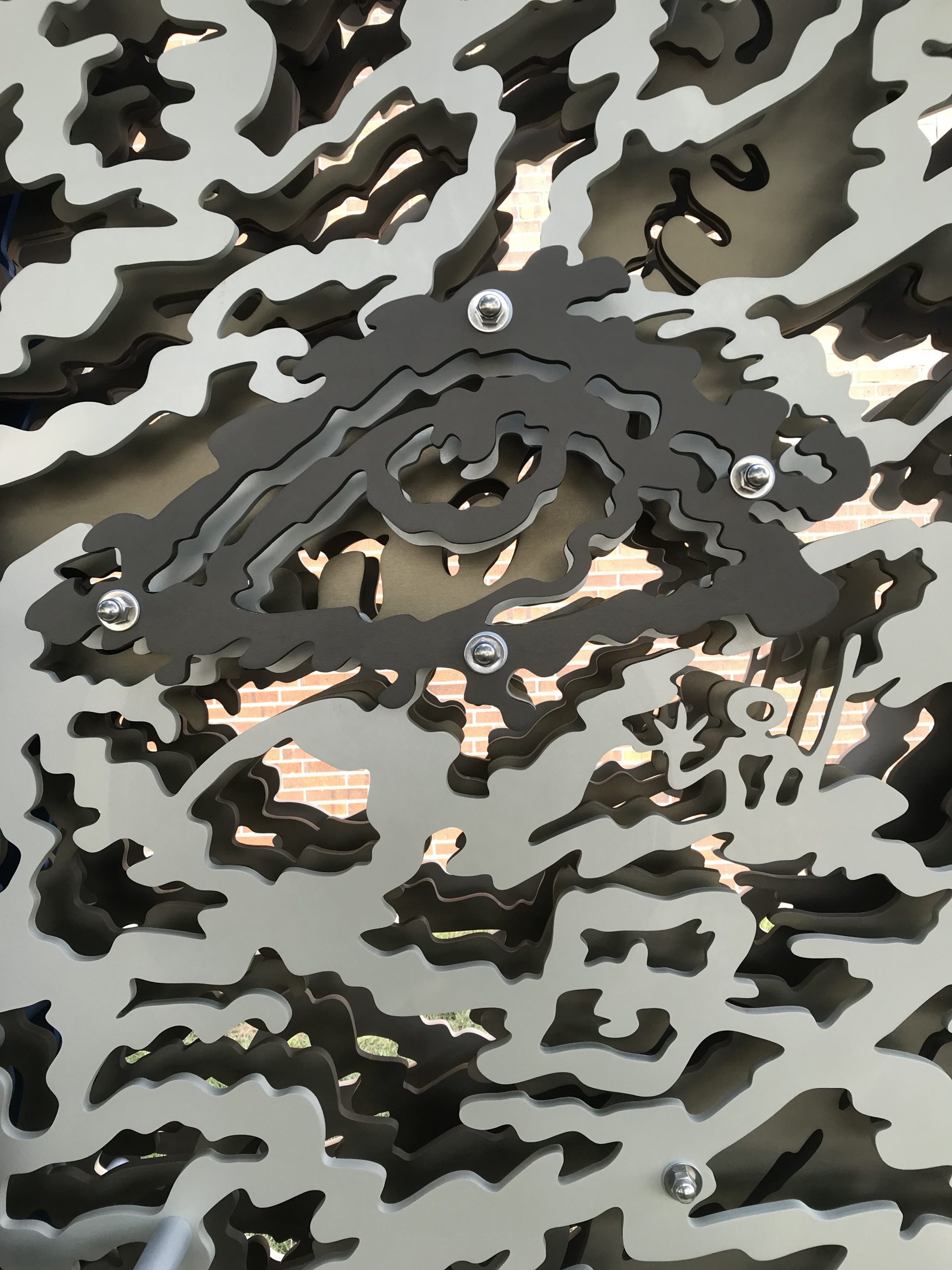 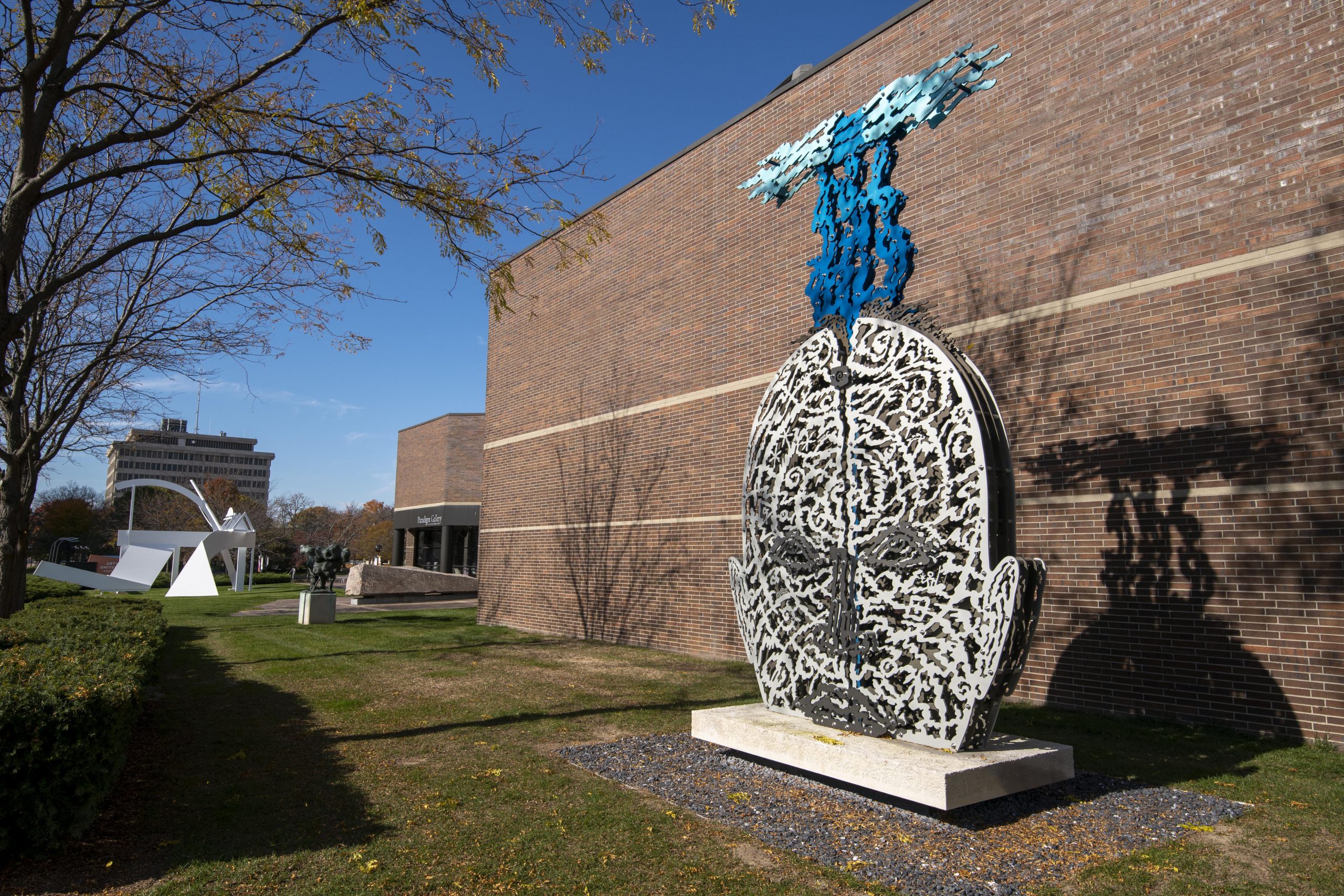 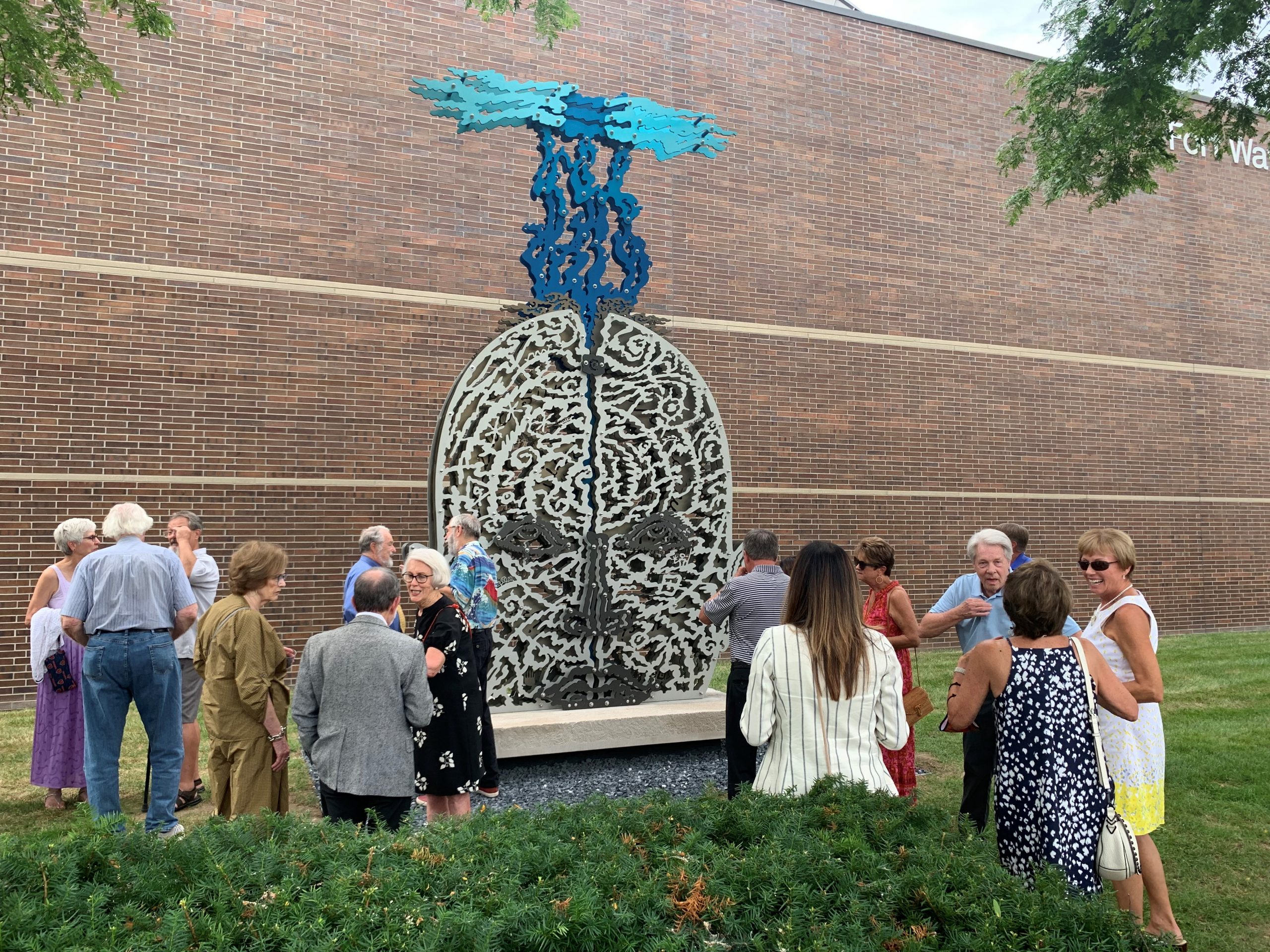 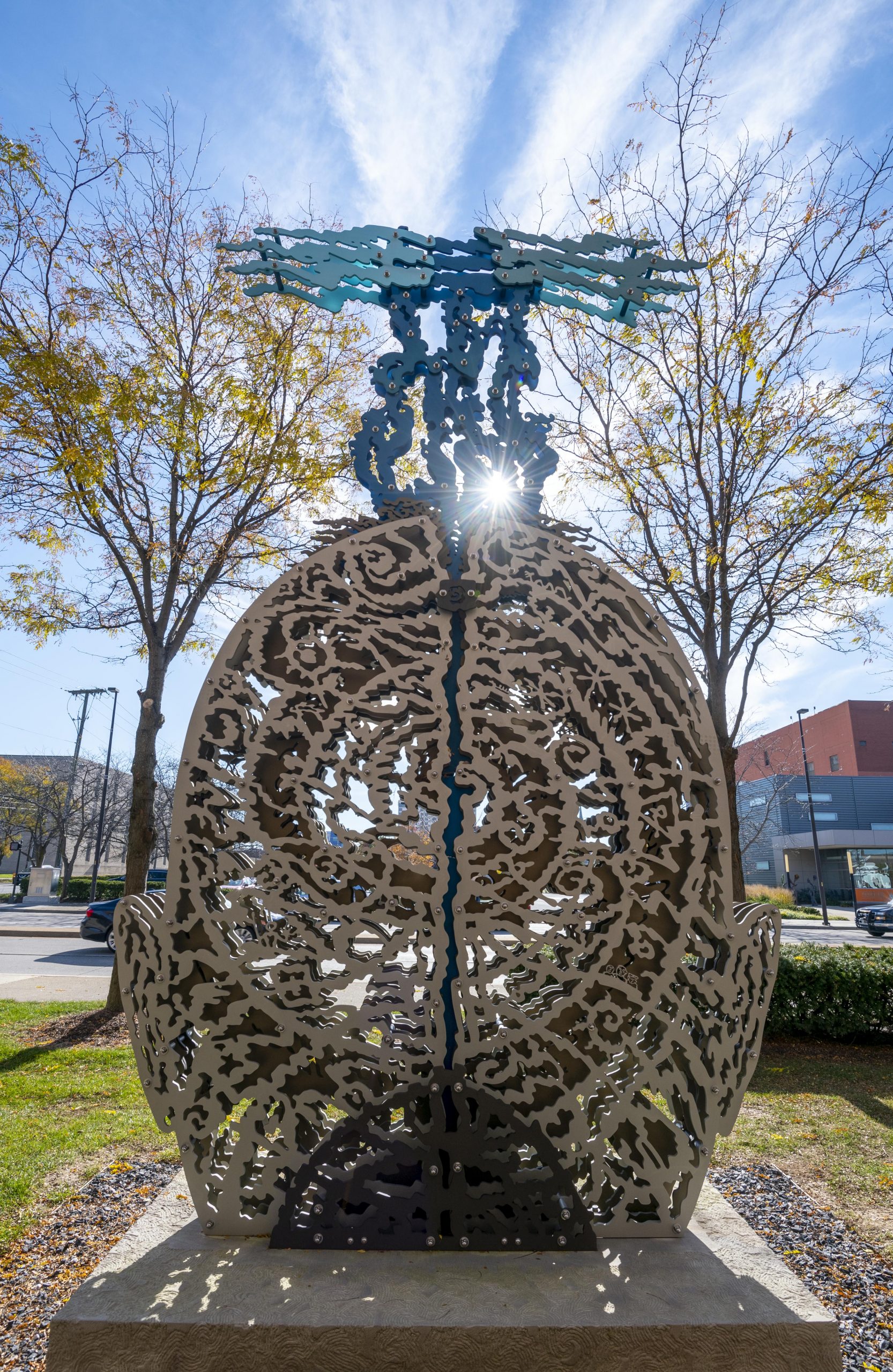 Ft. Wayne is located at the confluence of three rivers. The Saint Joseph River flows from the north, meeting the Saint Mary’s River, which flows from the south. At Ft. Wayne, these two rivers meet, combine, and create a third river, the Maumee. I cannot assess the current importance of these three rivers that meet at this city’s center. However, I believe that it is safe to say that the rivers have drawn communities to this convergence for well over a millennium. These three rivers are the heart of Ft. Wayne.

A short distance from the sculpture is the confluence of these three rivers and it is here that a large community of Native Americans had lived for untold generations.

With these thoughts in mind, the sculpture titled “There are Rivers” came into being. This composition depicts the head of a figure, (the spirit of the rivers) emerging from a floating pool carved in stone. Perforated layers of bronze, silver, and turquoise imagery illustrate the sculpture itself. Patterned within the outer layer of this sculpture is a spiraling vortex, which speaks of the three rivers’ focused energy.

Beyond recognizing the importance of this confluence I wanted to acknowledge the significance of the people who first settled this area. Due to the proximity of the location to the rivers and the former Native American community I believed that it was important to address the cultural history of the area.
The interior layers of the composition contain words and images pertaining to the three rivers themselves. Three of the words are the Miami tribal names of the rivers. Those are the St. Joseph, "Kociihsasiipi," the St. Mary's, "Nameewa Siipiiwi," and the Maumee, "Taawaawa Siipiiwi." These words recognize the indigenous peoples that first settled, occupied, and named these flowing waters. The exterior layer also contains imagery derived from traditional Native American sources. Both the words and the imagery were first discussed for their use within this project with scholars and leaders of the area’s Miami tribe.

Ultimately this sculpture is intended to evoke a recognition of the environmental spirit of these three rivers in hand with the people who first came to settle within their fluid embrace.

This sculpture was created through the development of multiple layered and registered drawings. The completed drawings were then scanned and turned into vector drawings by a persistent and talented individual, Terry Howe.

The vector imagery was then given to Water Jet Cutting of Indiana who cut out all of the images from ½” aluminum plate.

From there I returned to my studio and assembled the pieces along with the associated fabricated hardware. Once I confirmed that everything fit properly the piece was disassembled.

In the interim, the stone was cut and carved at my shop.

The aluminum pieces were then delivered to Northern Indiana Anodizing where the parts were anodized in their respective colors. Due to the generosity of NIA, I was provided space within the factory to assemble the piece.

From there the sculpture was delivered to and installed at the Fort Wayne Museum of Art.

I believe that it is important to recognize the often-forgotten people and cultures that settled in our environment before our European ancestors arrived. I think that it is difficult to understand who we now are without taking into account the history of those that came before. I have also addressed these sentiments in another piece that I previously created for the Indianapolis International Airport. That piece is titled “Elemental Indiana”. This Sculpture was commissioned to commemorate the Fort Wayne Museum of Art's 100th anniversary.