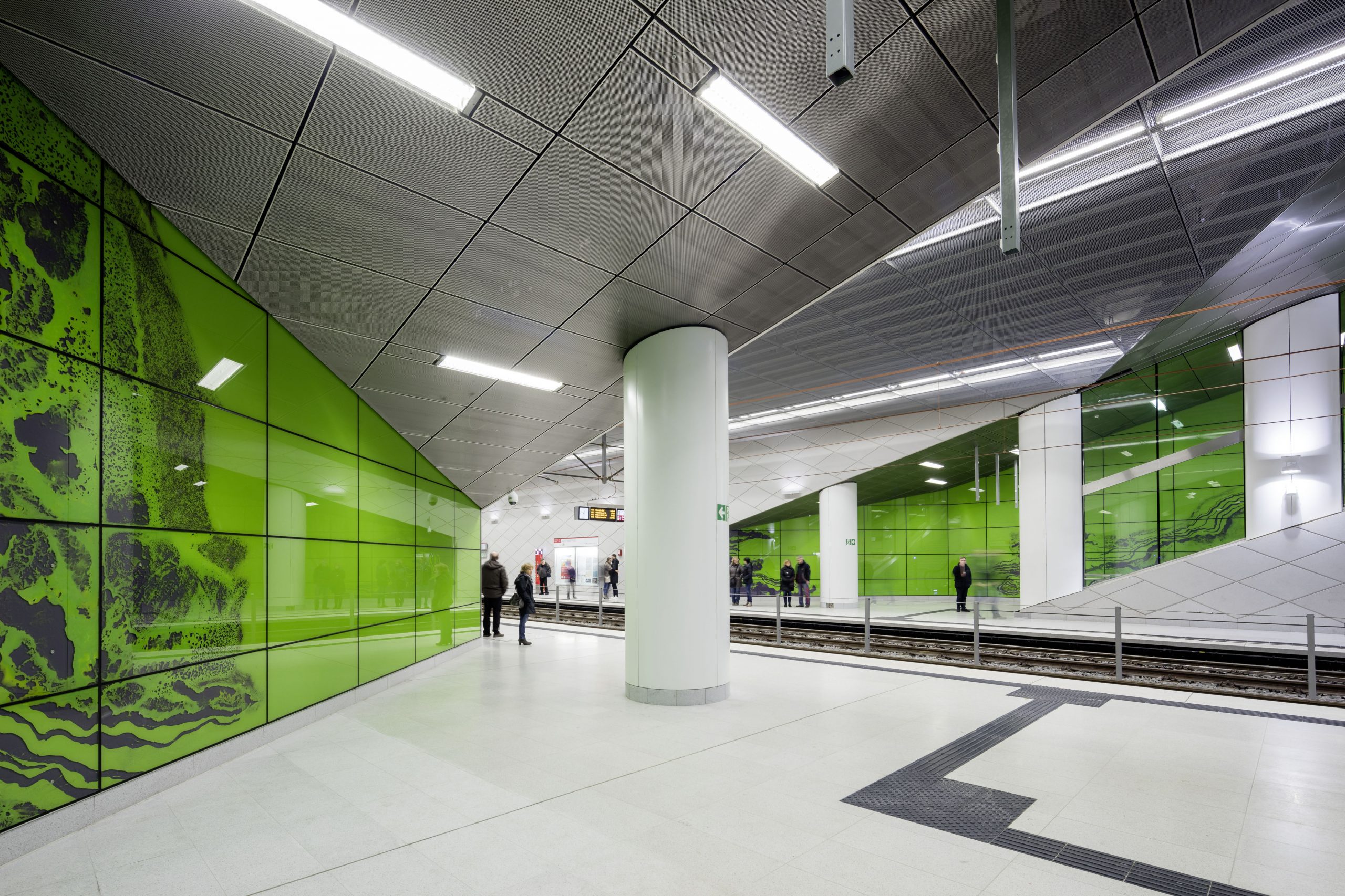 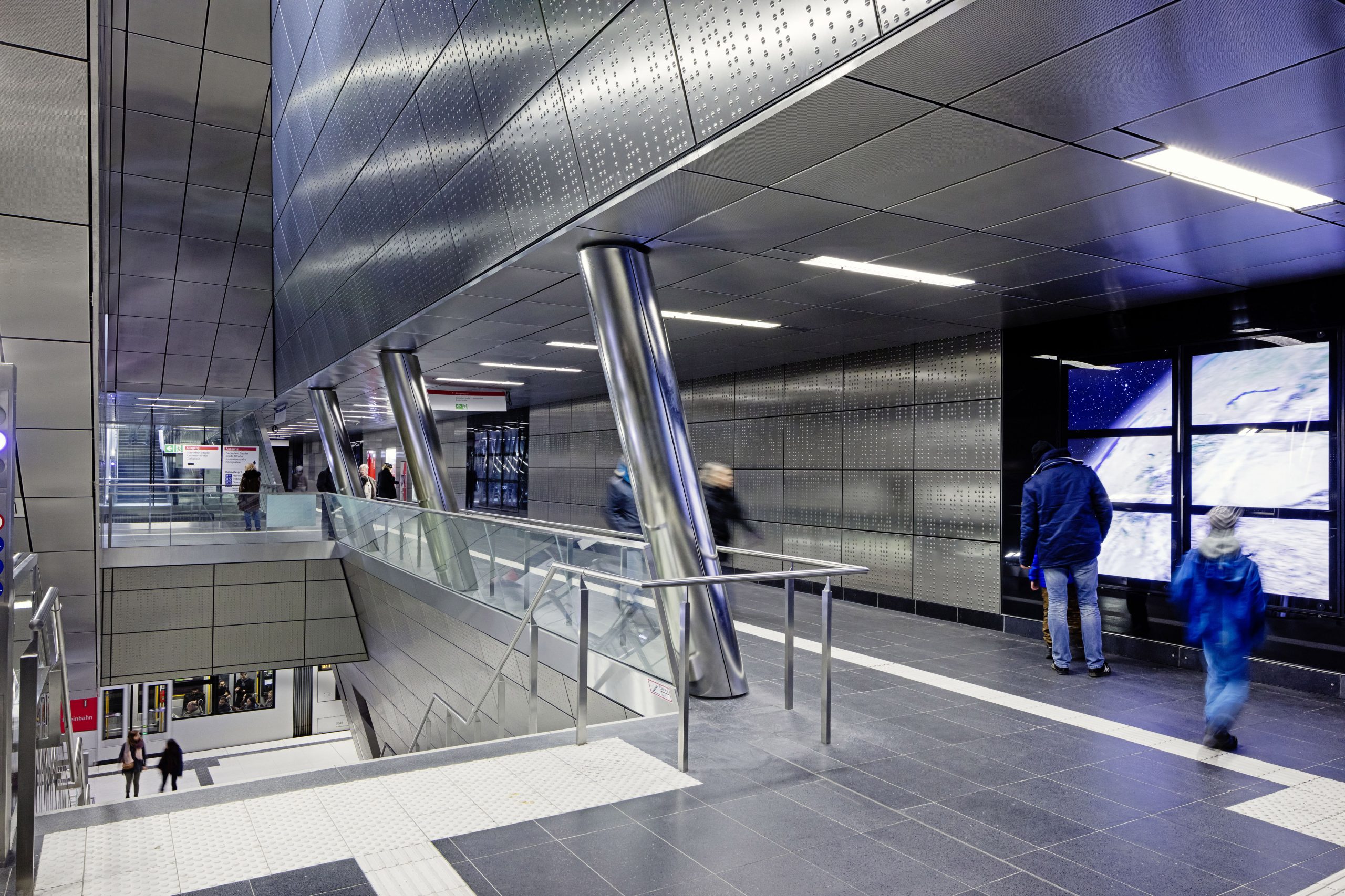 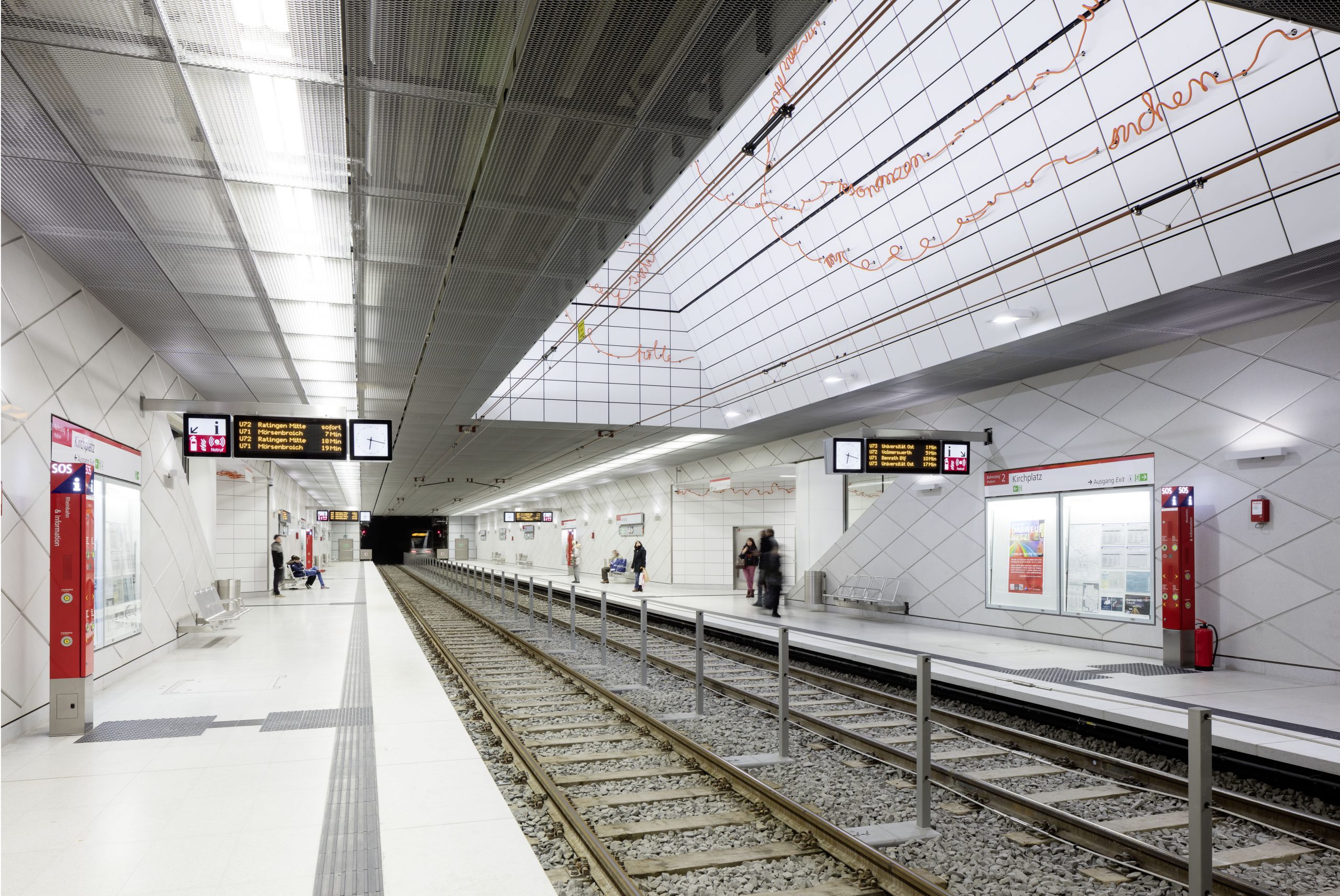 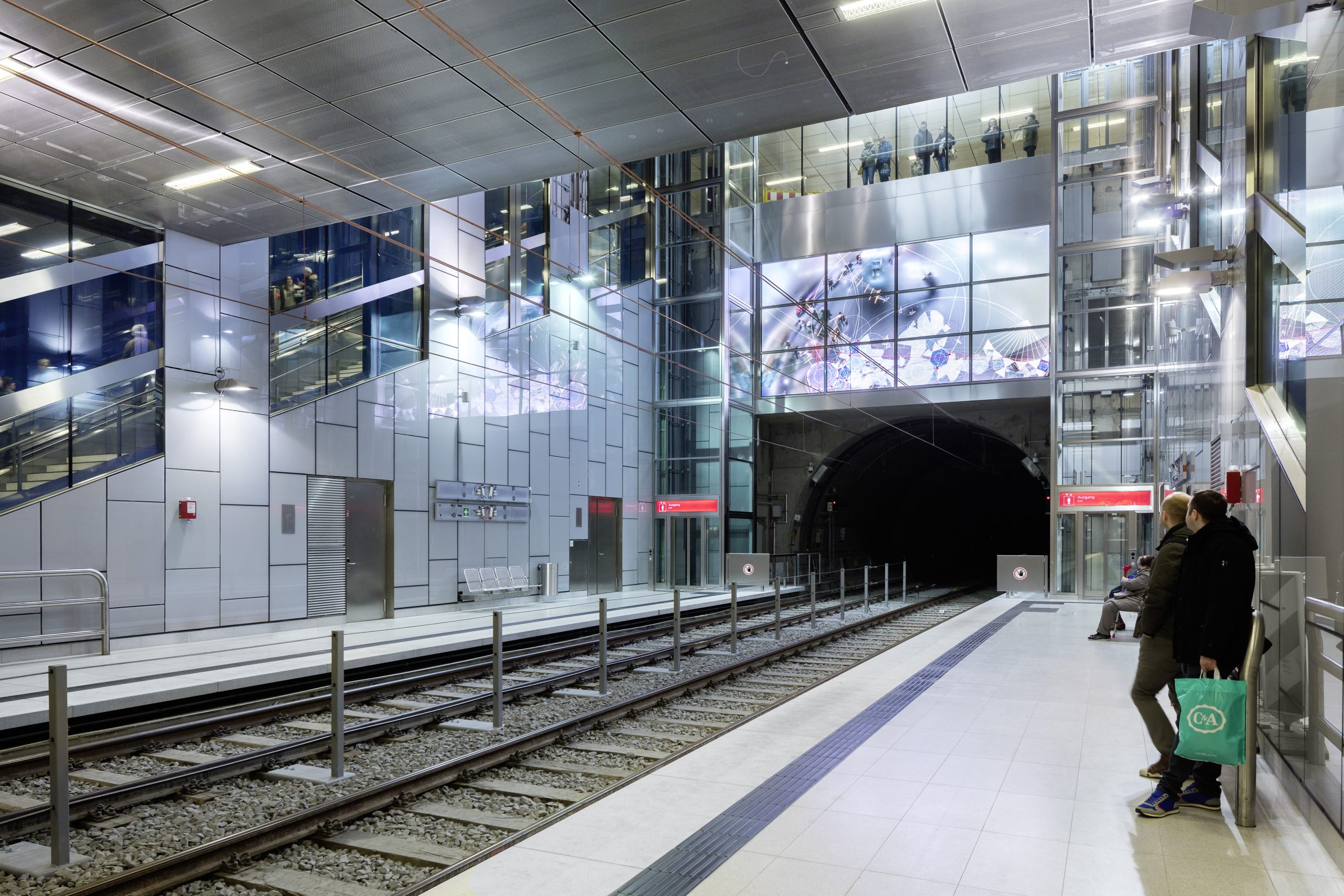 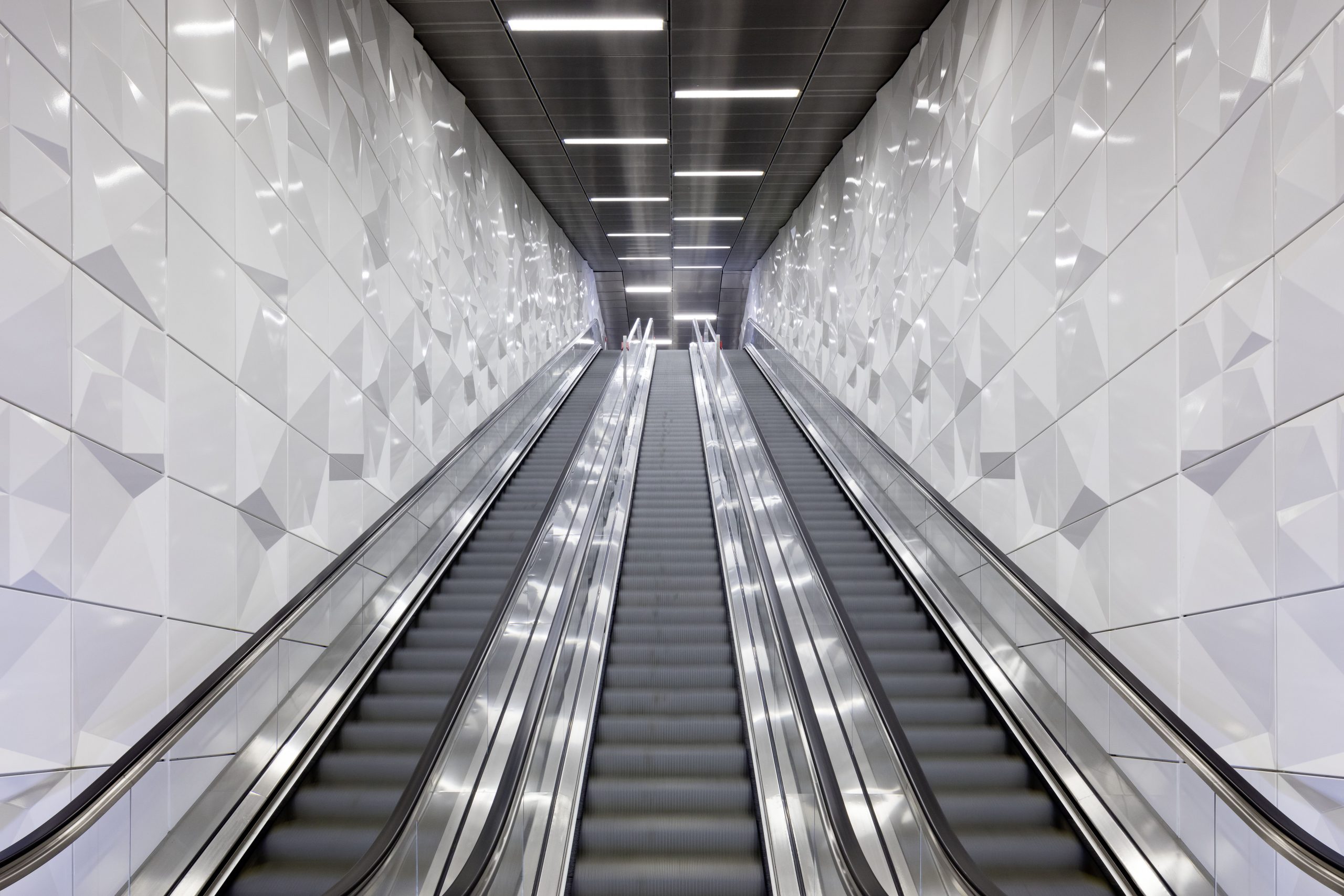 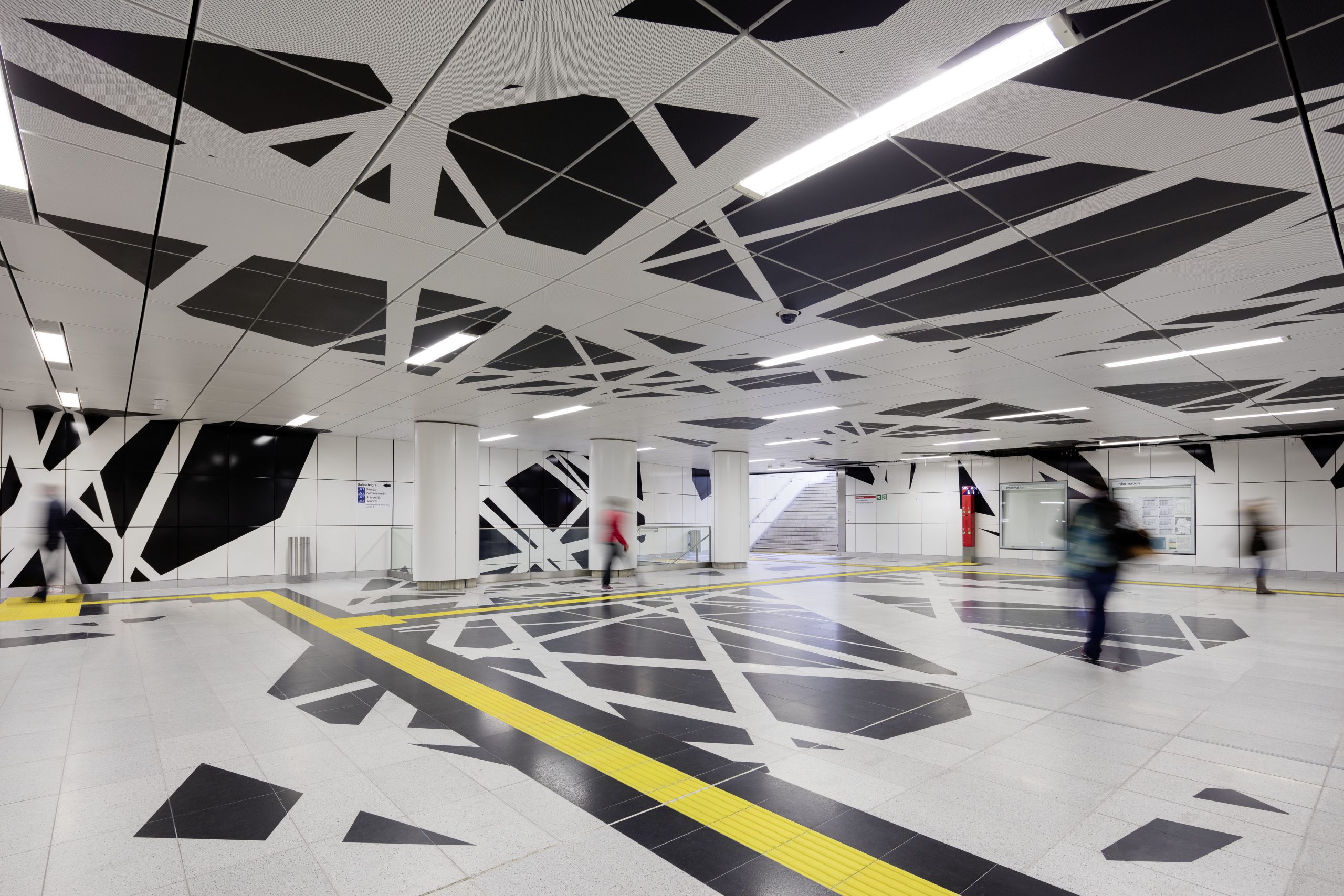 The Wehrhahn Line Project is a team effort by architects, engineers, artists, and the city’s administration and represents the result of 15 years planning and construction work. It is a new 3.4 kilometer-long section of tunnel with 6 stations that runs under downtown Düsseldorf. The unique concept shows how architecture and art can inseparably combine.

In accordance with the basic architectural concept, the 6 station spaces are designed as a single continuum. Unlike the individually designed characteristics of the incisions in each station, which connect the underground stations to the aboveground urban space, the design of the actual station spaces refers to the precast concrete “segments” that constitute the tunnel space proper and interprets these in terms of generously contoured expansions.
The unmistakable visual properties of the precast concrete wall reliefs runs through all the stations and thus significantly supports perception of the conceptual idea of the spatial continuum.
By contrast, the incisions accommodate the access routes, stairs, elevators and concourses. The aim was to open up sightlines to create a direct visual connection and, whenever possible, to bring daylight right down to track level.

It all started in 2001 with an EU-wide competition which was won by netzwerkarchitekten with Berlin artist Heike Klussmann.
The jury unanimously commended: “... a design principle that fosters a distinctive identity, combined with a particularly persuasive interpretation of technical specifications (…) should be basic throughout the entire Wehrhahn Line. The next step must be to elaborate the different character of the individual stations with respect to the specific urban context and technical specifications. Additional artists (…) should be brought on board to help reinforce these different traits.”
Right from the outset of the competition the foundations has thus been laid to ensure that rather than a heterogeneous collection of stations, the Wehrhahn Line would be able to incorporate artists to work on station designs within the overarching concept innate in the winning proposal by netzwerkarchitekten.
The subsequent art competition selected besides H. Klussmann (Pempelforter Straße), E. Haehnle (Kirchplatz), M. Franke (Graf Adolf Platz), T. Stricker (Benrather Straße), R. Brög (Heinrich Heine Allee) and U. Damm (Schadowstraße). Throughout the planning and implementation of the project, there was constant, intense collaboration between the architects, engineers and artists.

The choice of a precast concrete cladding system for the station walls derives from translating the concrete prefabricated sectional elements used in tunnel construction into another medium. The cladding’s geometric structure – based on a stretched and compressed diamond – is reminiscent of snakeskin, and echoes the winding tunnel. Art is not only an applied layer. The same is true of all the artistic interventions in the incisions. They intervene in the space, impact on it such that the artistic concept has a direct bearing not just on the specific architecture but on its structural elements too.