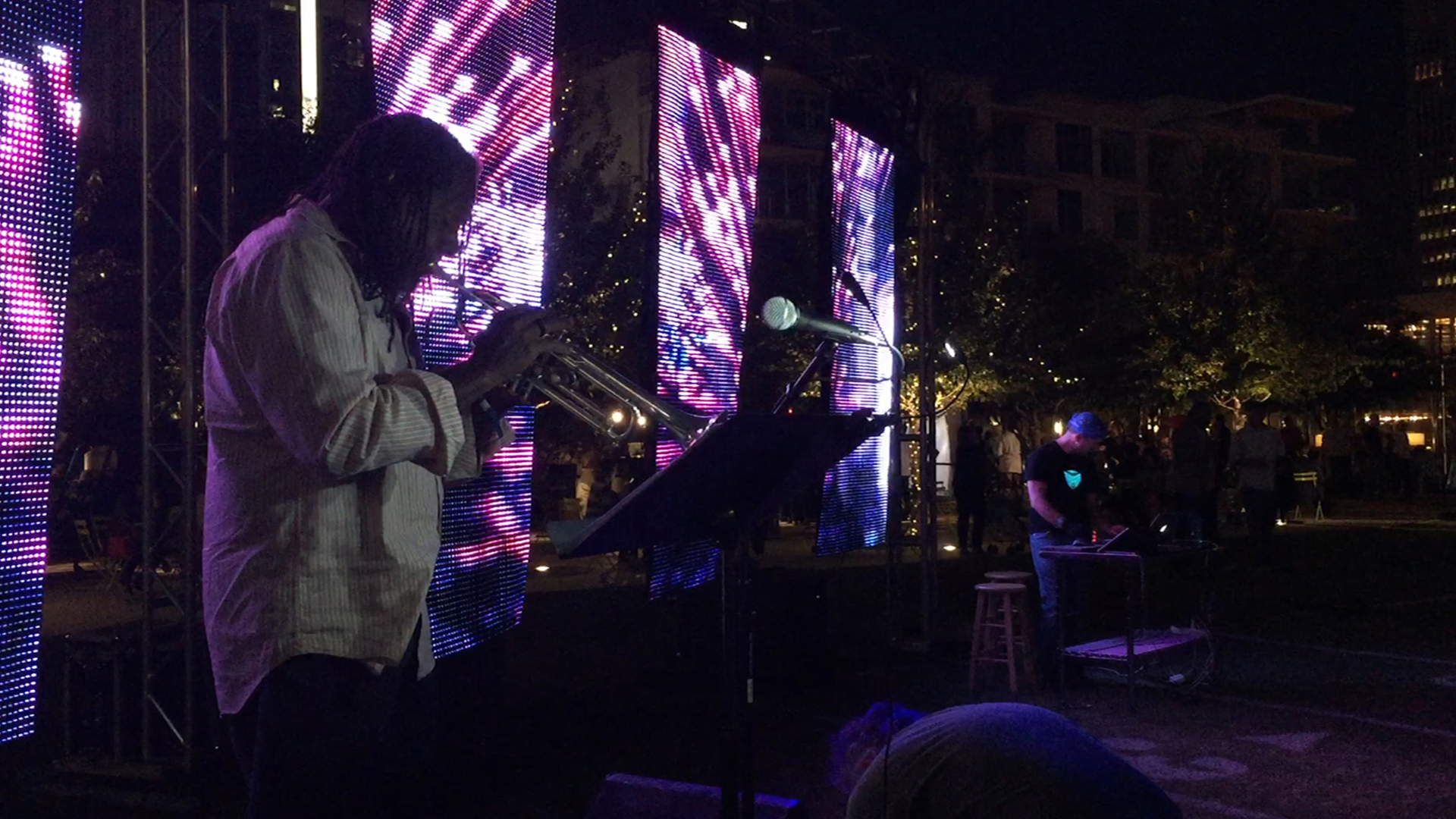 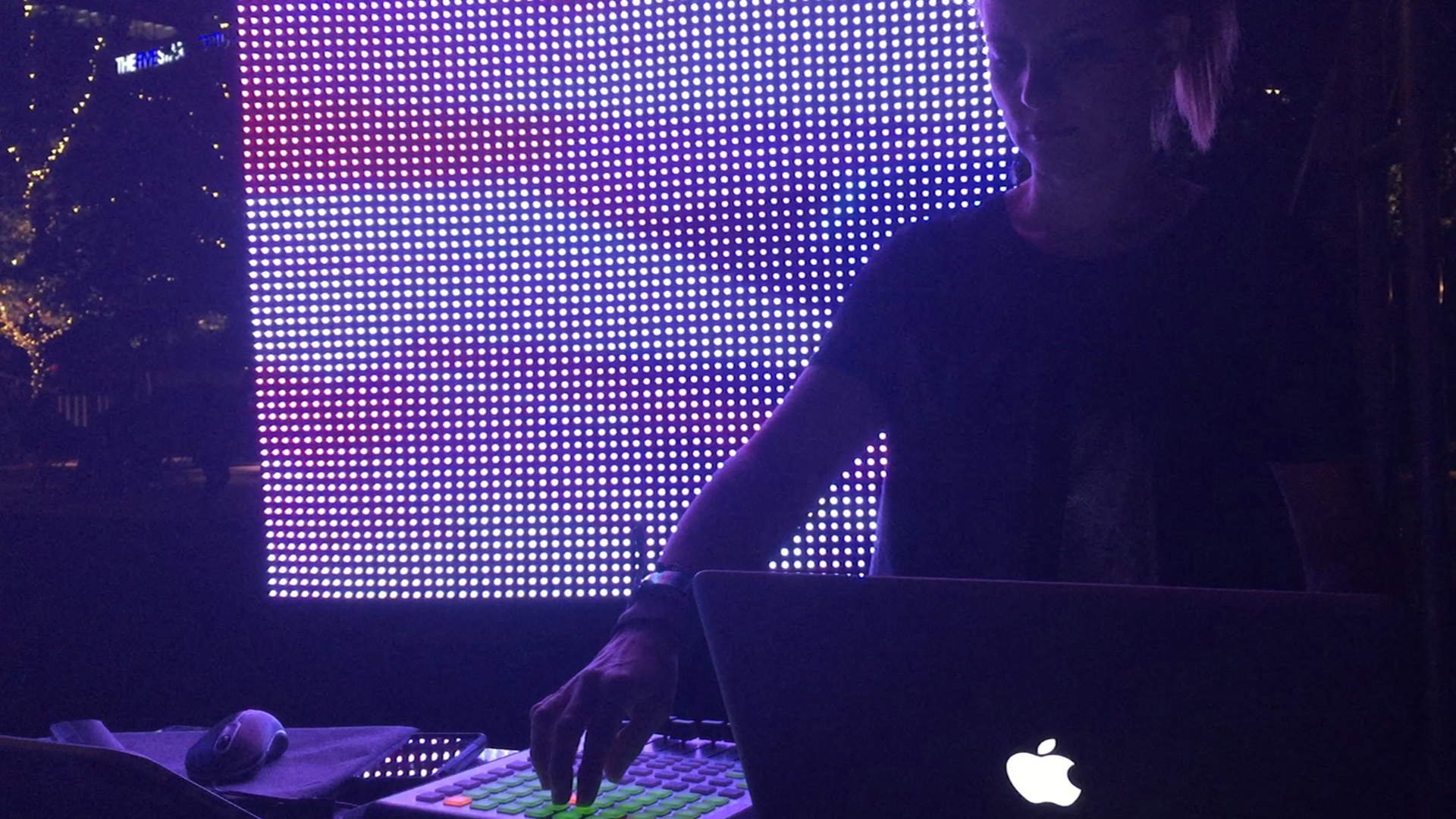 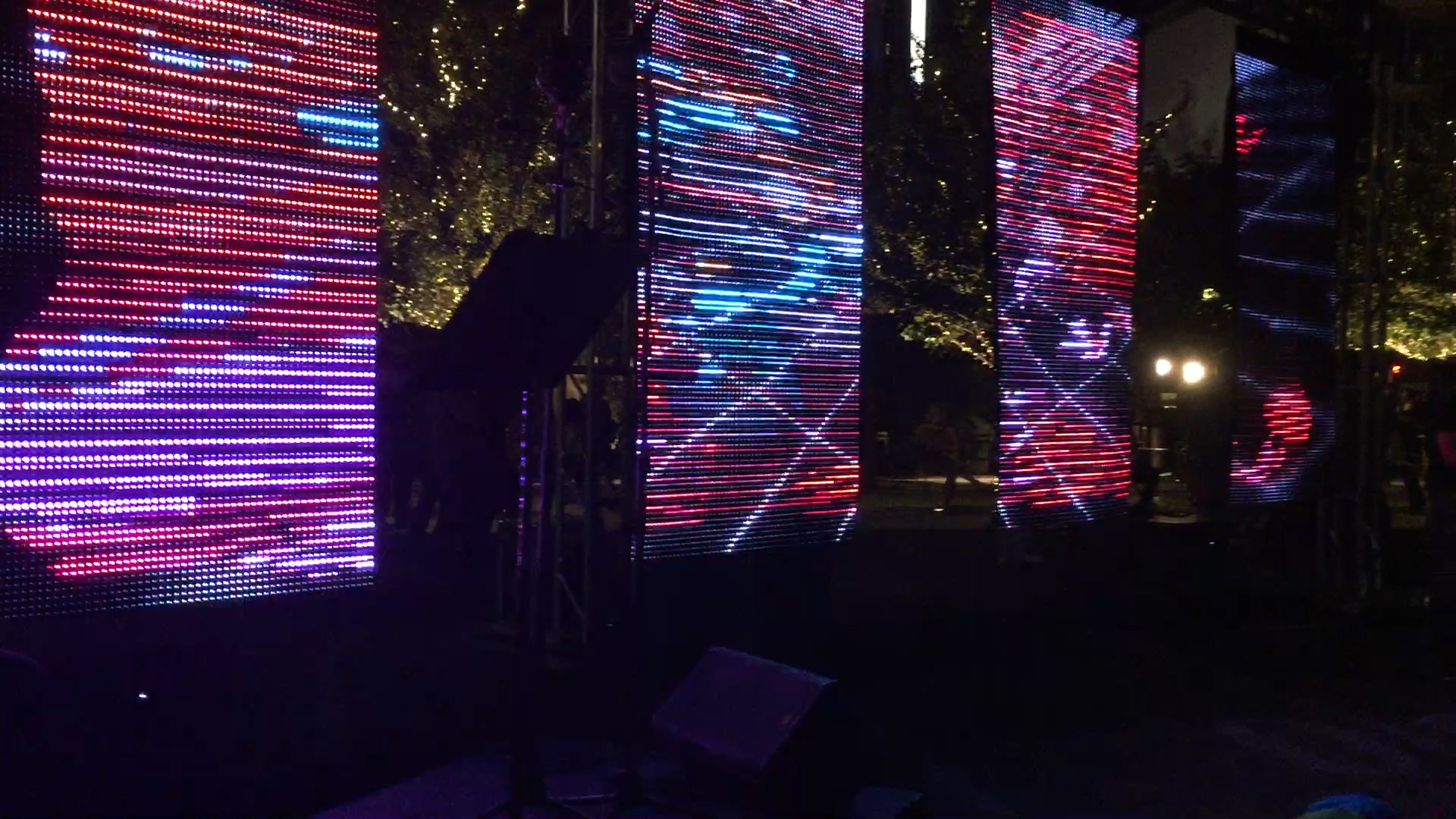 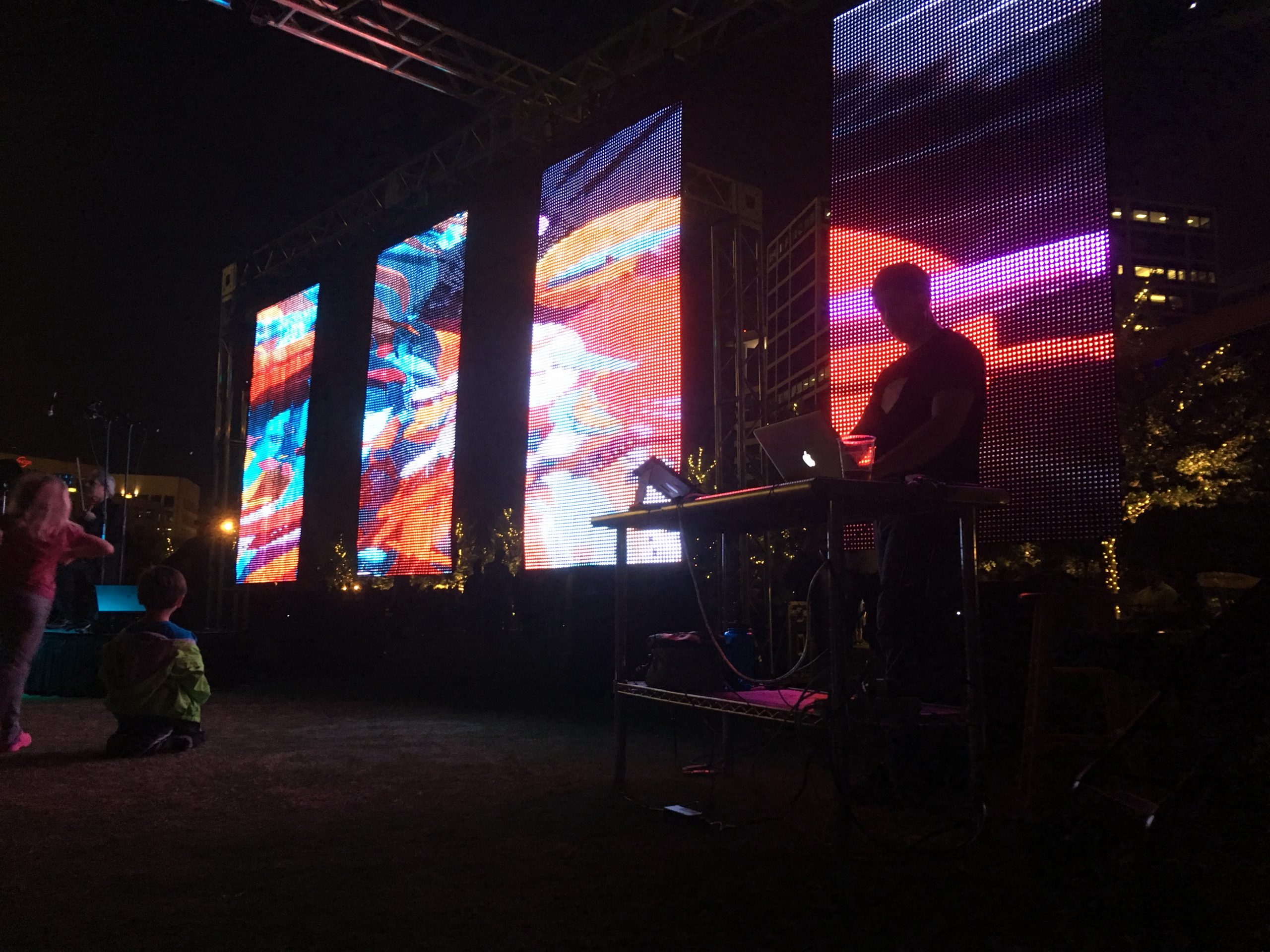 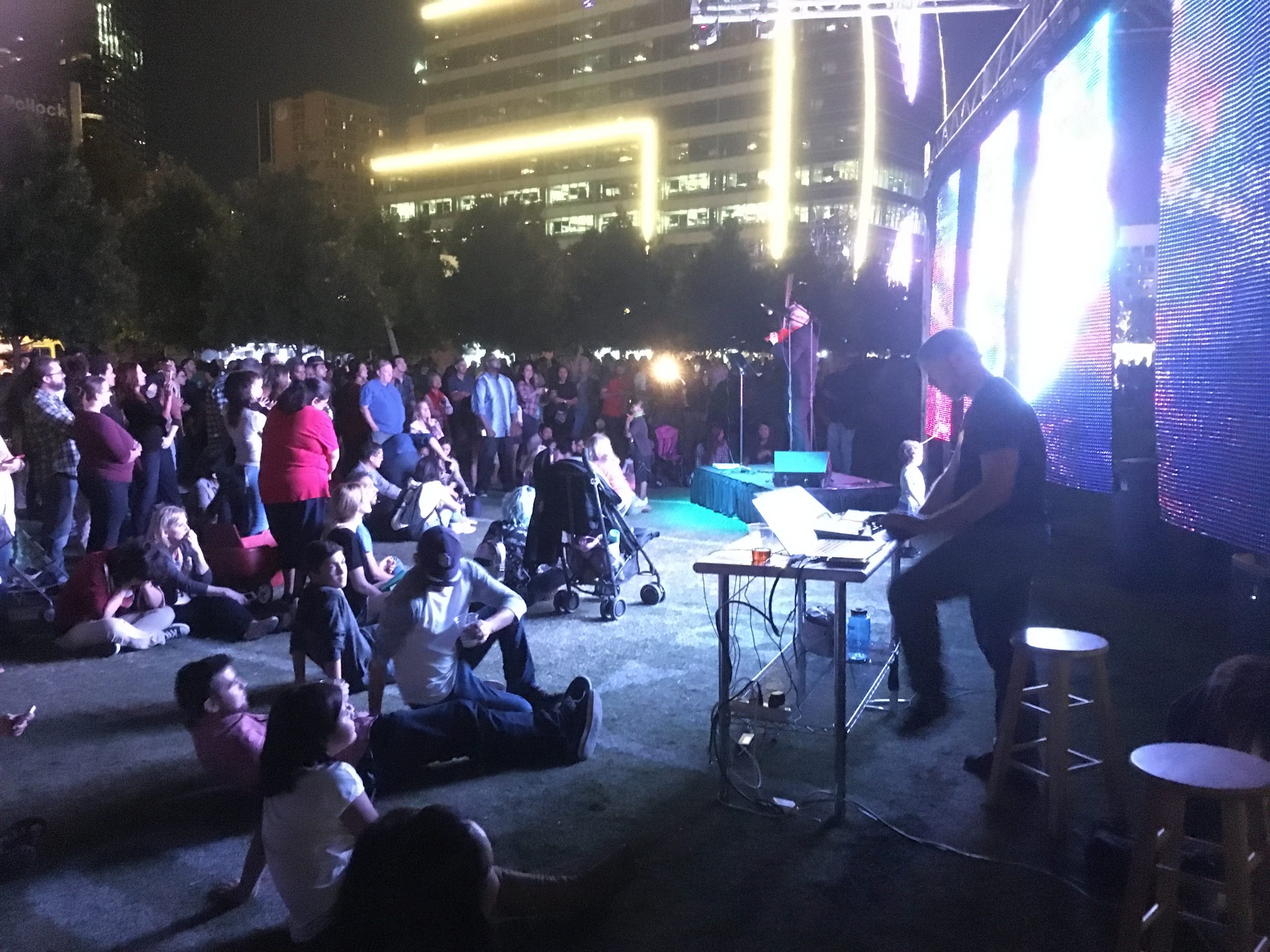 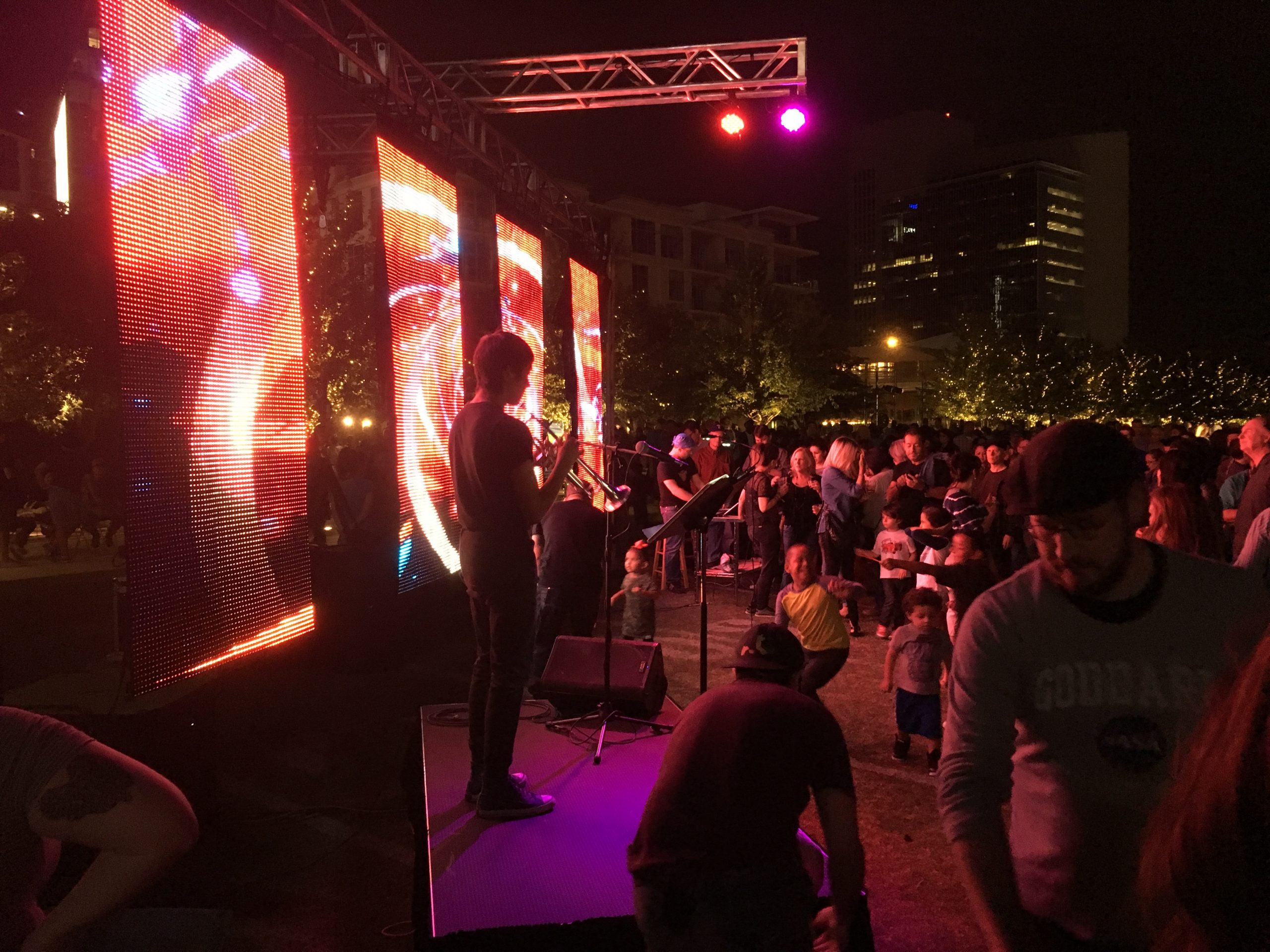 For our project ‘The Theory of Chance’, our goal was to design a multi-layered installation utilizing the generative transformation of visuals and light through sound for Dallas Aurora 2015, a light based art event in Dallas, TX. An original score accompanied this concept and community participation was encouraged. The installation comprised an area of approximately 1200 square feet. Four LED panels measuring 12’ h x 4’w hung from a constructed truss system. Attendees could traverse in and out of LED panels creating an open feel. A stage for musicians was to stage right and a VJ booth to stage left.

Artists were invited to submit proposals incorporating light, video, sound and digital work for Aurora 2015: ‘All Together Now’. Proposals were to explore innovative approaches to a public art event that would transform the neighborhood of the Dallas Arts District (68 acres/19 city blocks of downtown Dallas, Texas). Our ‘Theory of Chance’ proposal was selected by curator Aja Martin and was placed at Klyde Warren Park, a 5.2-acre public park. Integrating commissioned artwork into the architecture and landscape including community participation was key to our proposal’s success. The installations selected for Aurora were instrumental in creating an immersive experience for attendees to enjoy art outside of the traditional museum walls. Synesthesia – a term for "the joining of the senses" was the theme for Aurora 2015 - ‘All Together Now’. Artists were asked to propose “works that stimulated a multi-sensory, synaesthetic experience using unexpected materials and technologies to create experiences that connected the borders between the five basic senses: sight, sound, taste, smell, touch.”
With more than 30,000 attendees at Aurora in 2013, this year’s event brought together 60,000 visitors, artists and curators from the local and international community for an immersive sensory experience.

The initial concept and proposal for “The Theory of Chance’ was submitted by Menza Art Studio. A main component the vision was to utilize software that would interactively generate visuals through audio input. Menza proposed visual elements though a combination of in-camera footage and graphic elements creating short clips to be switched live during performance. Composer Mark Menza then created the musical score that would trigger the visual symphony. Gary Levinson, principal associate concertmaster of the Dallas Symphony Orchestra and Freddie Jones, an accomplished jazz trumpet player joined us in the studio ahead of time to record their parts. The recorded music and score was released to the public two weeks prior to event so that they could rehearse the composition. The public was then invited to participate on stage at the event by improvising over the original score. This audio element contributed by community musicians was pivotal as it triggered elements of the visual component that continually transformed throughout the evening. Matt Brooks contributed greatly to this project with his expertise in software bringing the final concept to life.

‘The Theory of Chance’ was a great success for the 60,000 attendees of Aurora Dallas 2015. Visitors to our installation were engaged by the continually changing visuals. Many musicians from the community took to the stage during the evening and each performance created a new and unique visual creation. We experienced many favorable comments from those involved at AT&T and Aurora Dallas in the days and weeks that followed. Prior to the event we were featured through AT&T's letter to patrons. http://www.attpac.org/news/2015/10/this-composer-has-synesthesia.-he-wants-to-pass-it-on-to-you-at-aurora./