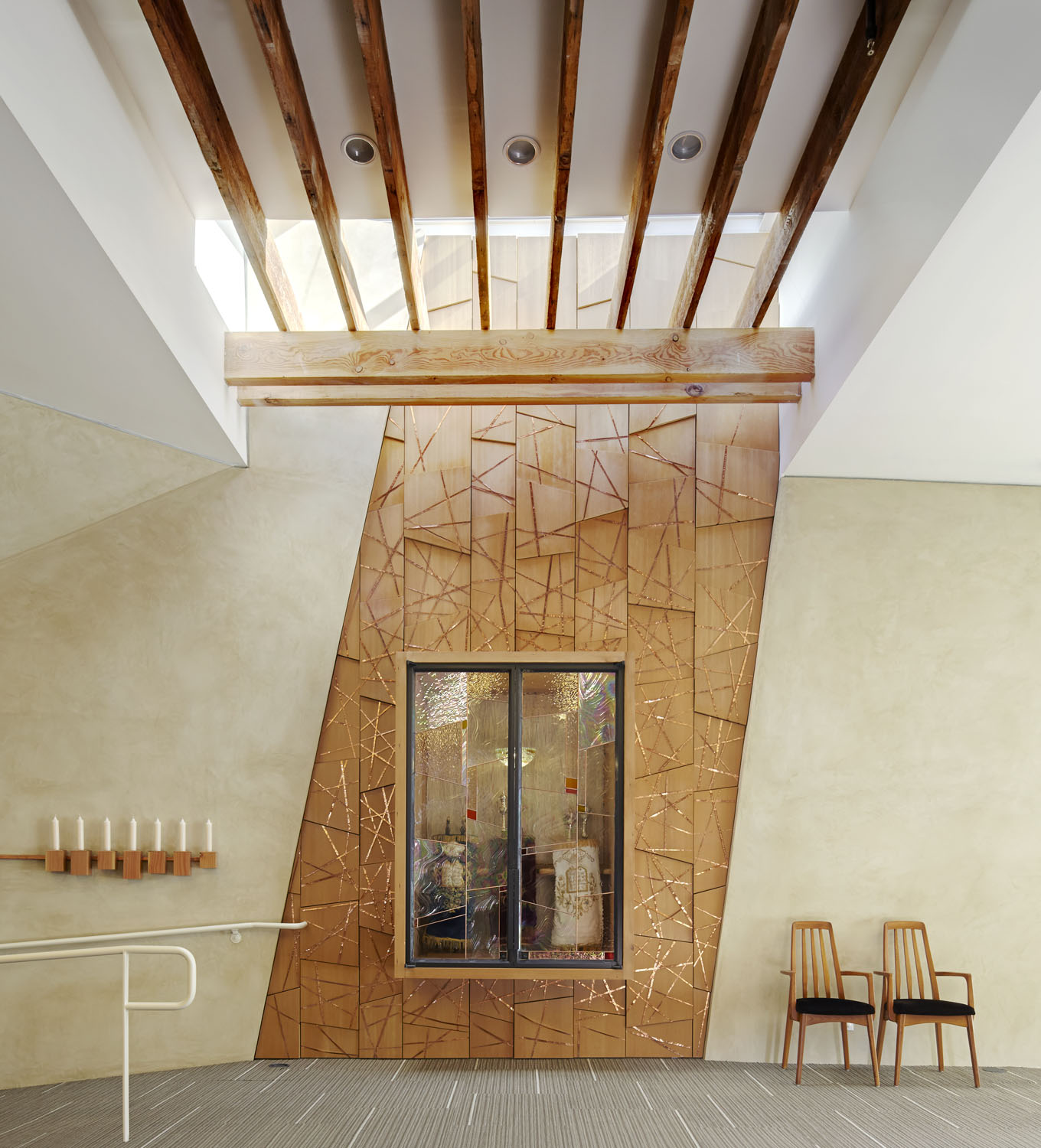 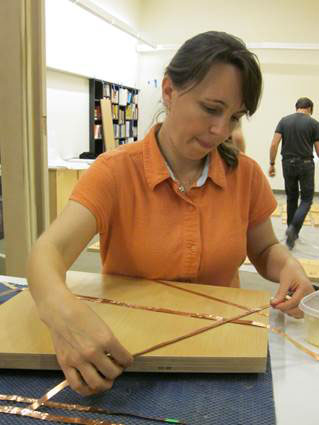 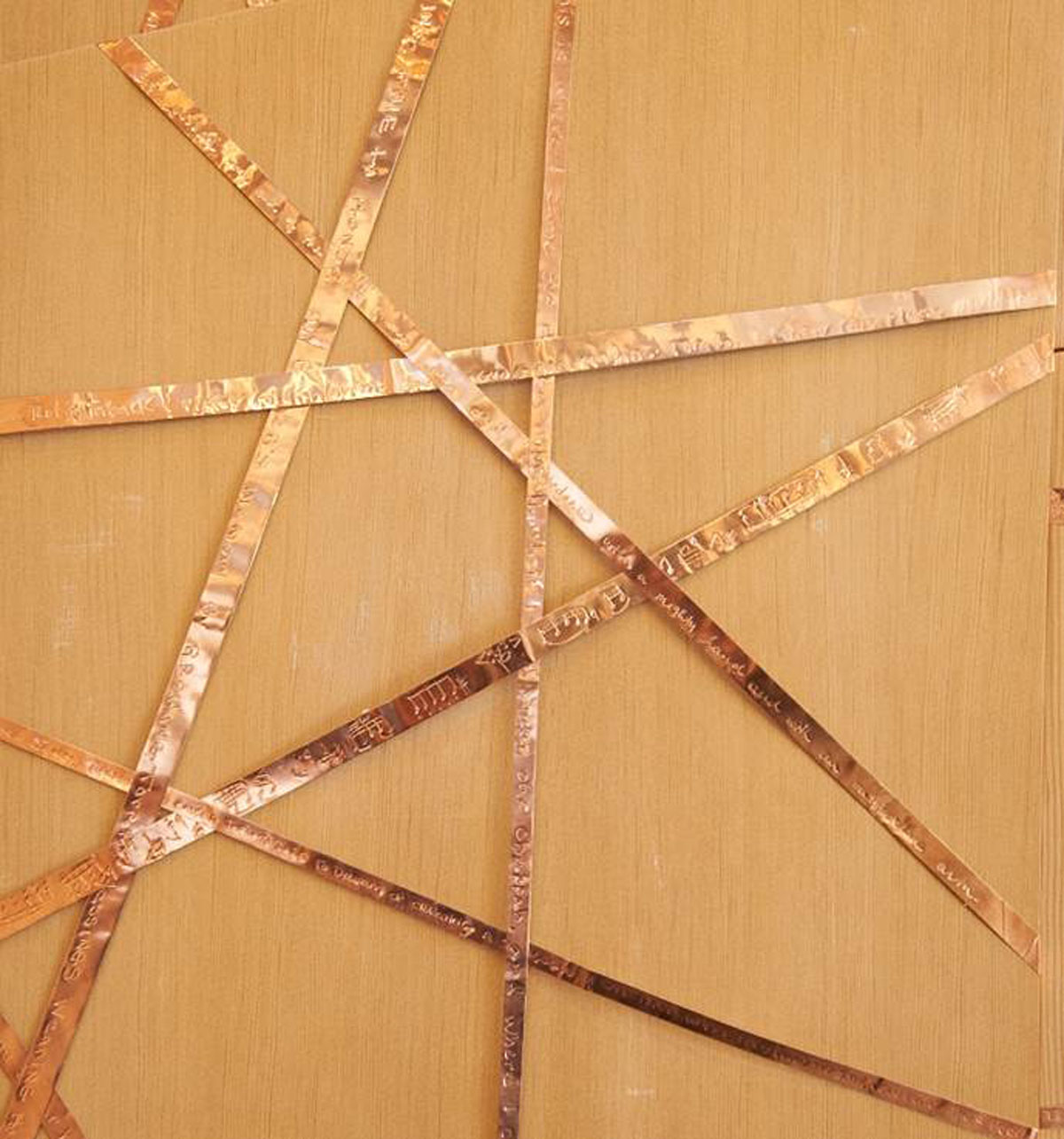 The StoryLines Project was created as a community art project to be installed on the main wall of Temple Beth Chayim Chadashim's new sanctuary space. The piece is a gathering of copper strips, upon which, in a series of workshops, individual congregation members hand-etched words that described their personal connection to the larger community (the “StoryLines”). The strips were collected, documented, sorted, and installed in an intertwining pattern on wood blocks, forming a wall that surrounds the Torahs. The ark doors were fabricated with a pattern that echoes the StoryLines, by artists in the community.

The community of Beth Chayim Chadashim is very arts-oriented, and their previous home showcased work by many talented artist members. It was important to the architects to create a piece for the new building that reflected the unique character of the congregation. The idea to weave the stories of the individual congregants into an art piece for the sanctuary became an opportunity to involve every member of the community in a project. The architects led a series of workshops and demonstrated how to etch the copper strips (using knitting needles), a process that was simple enough to allow everyone, not just the artists of the community, to participate. The piece is designed to be added to over time, so that new members are able to add their stories to the wall as well.

The process for creating the StoryLines was intensely collaborative. The architects led the initial design efforts, working closely with a design committee from the Temple. As the project took off, other artists became involved, including four glass artists from the community who designed and built doors for the ark that reflected the patterns made by the StoryLines. The panels of the wood wall are fabricated to come down in small sections, in a system designed by woodwork artist Peter Vogel. The physical creation of the wall was also a totally collaborative effort, as the copper strips were hammered in place by the architects working with members of the design committee, the temple director, and even the clergy!

The history of Temple Beth Chayim Chadashim (BCC) is unique, and the project reflects this: BCC was founded in 1972 as the world’s first synagogue for gay and lesbian Jews. Embraced from the start by the Union of American Hebrew Congregations (now the Union for Reform Judaism), BCC has been a pioneering community for over 40 years, including creating the first prayerbook to embrace degenderized language for God, introducing egalitarian worship services with lay service leaders, and in the creation of life cycle rituals for lesbian and gay individuals and couples.