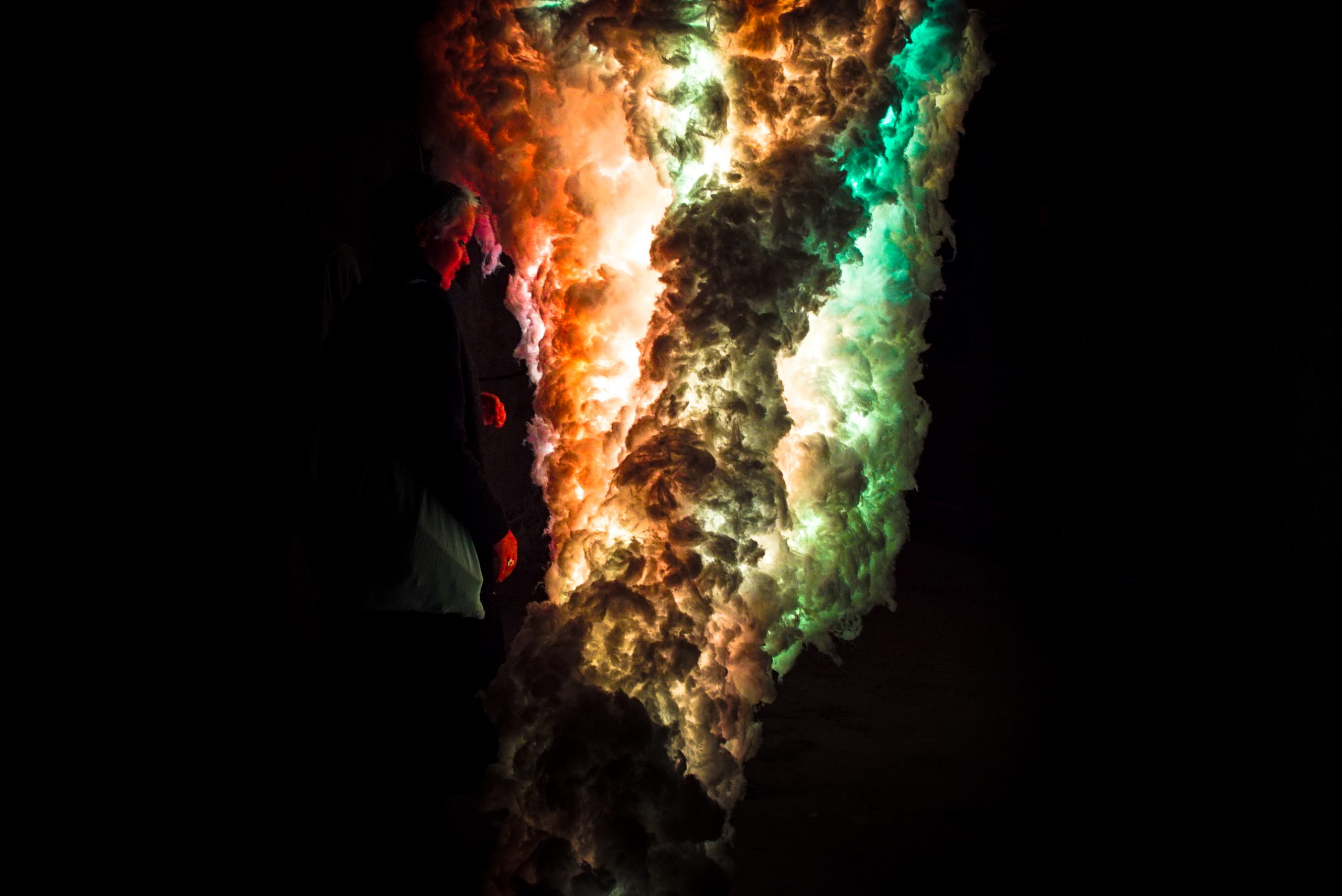 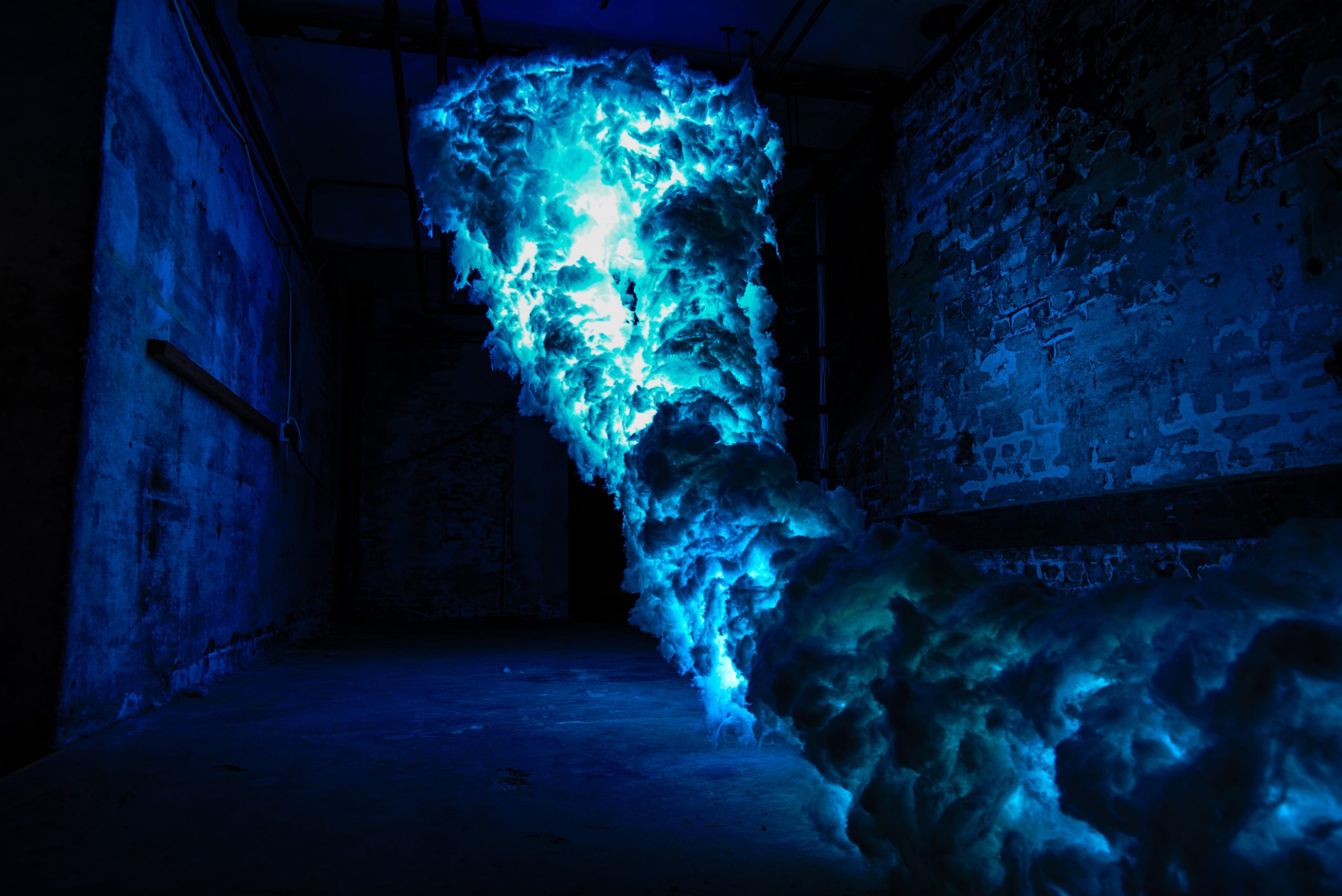 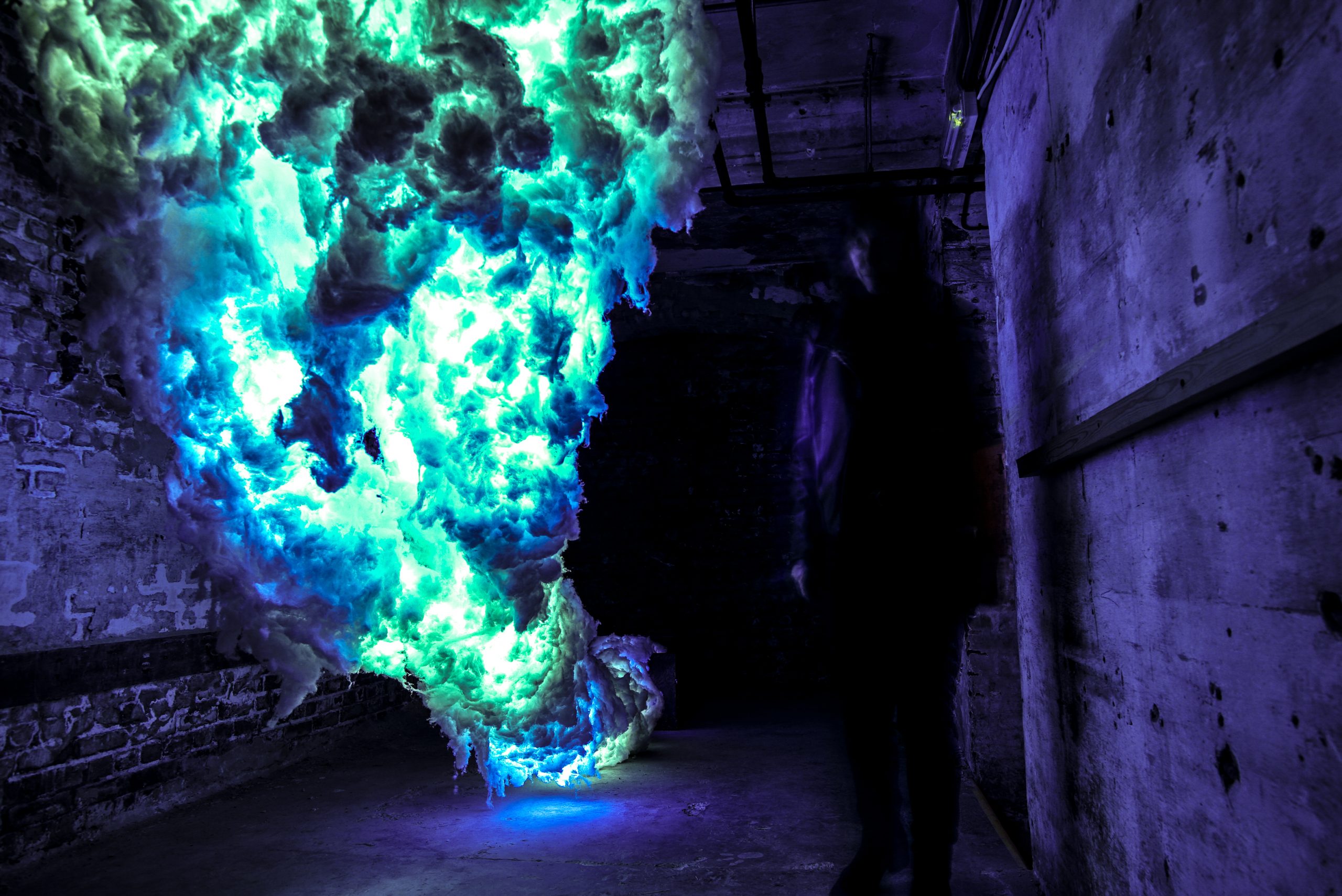 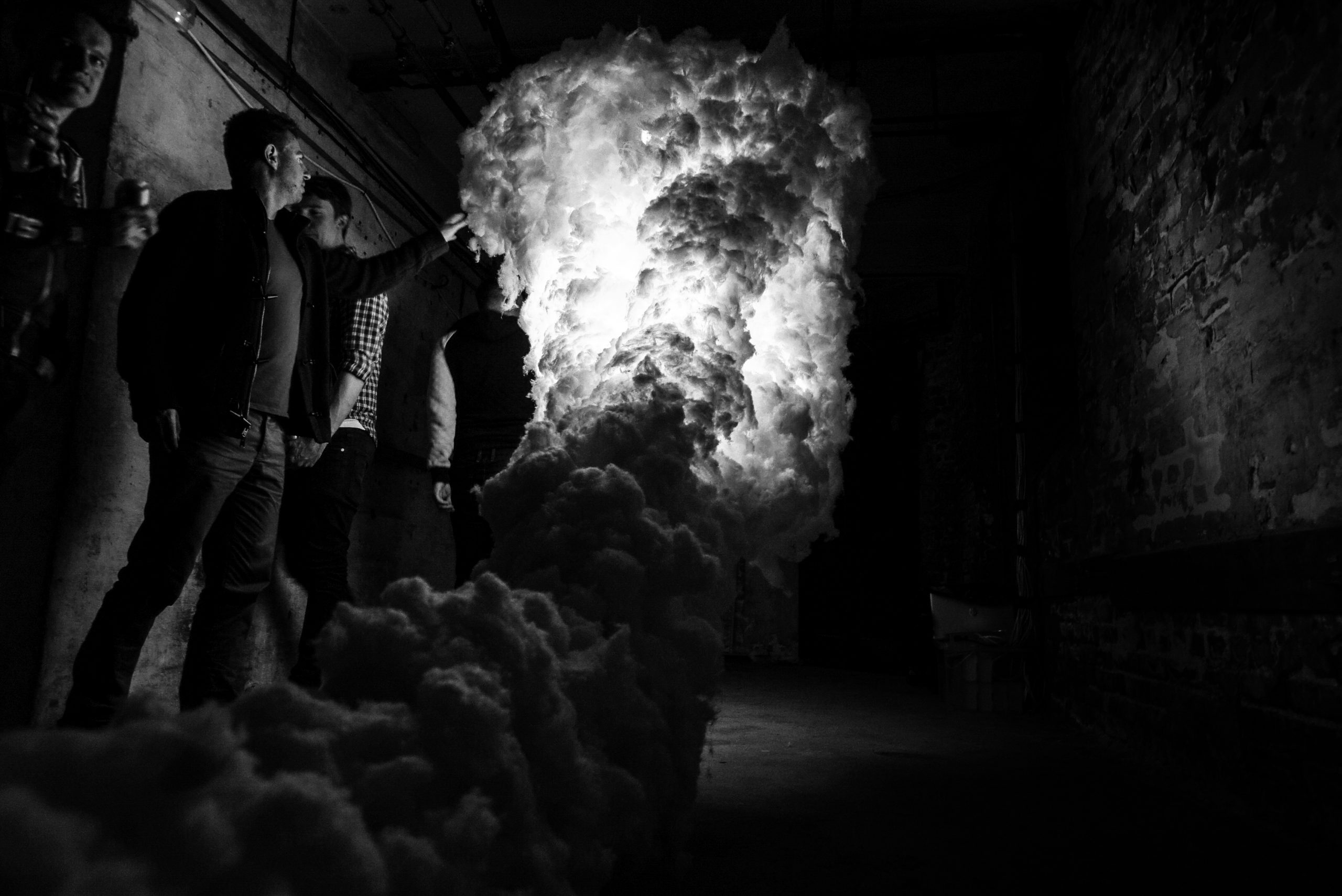 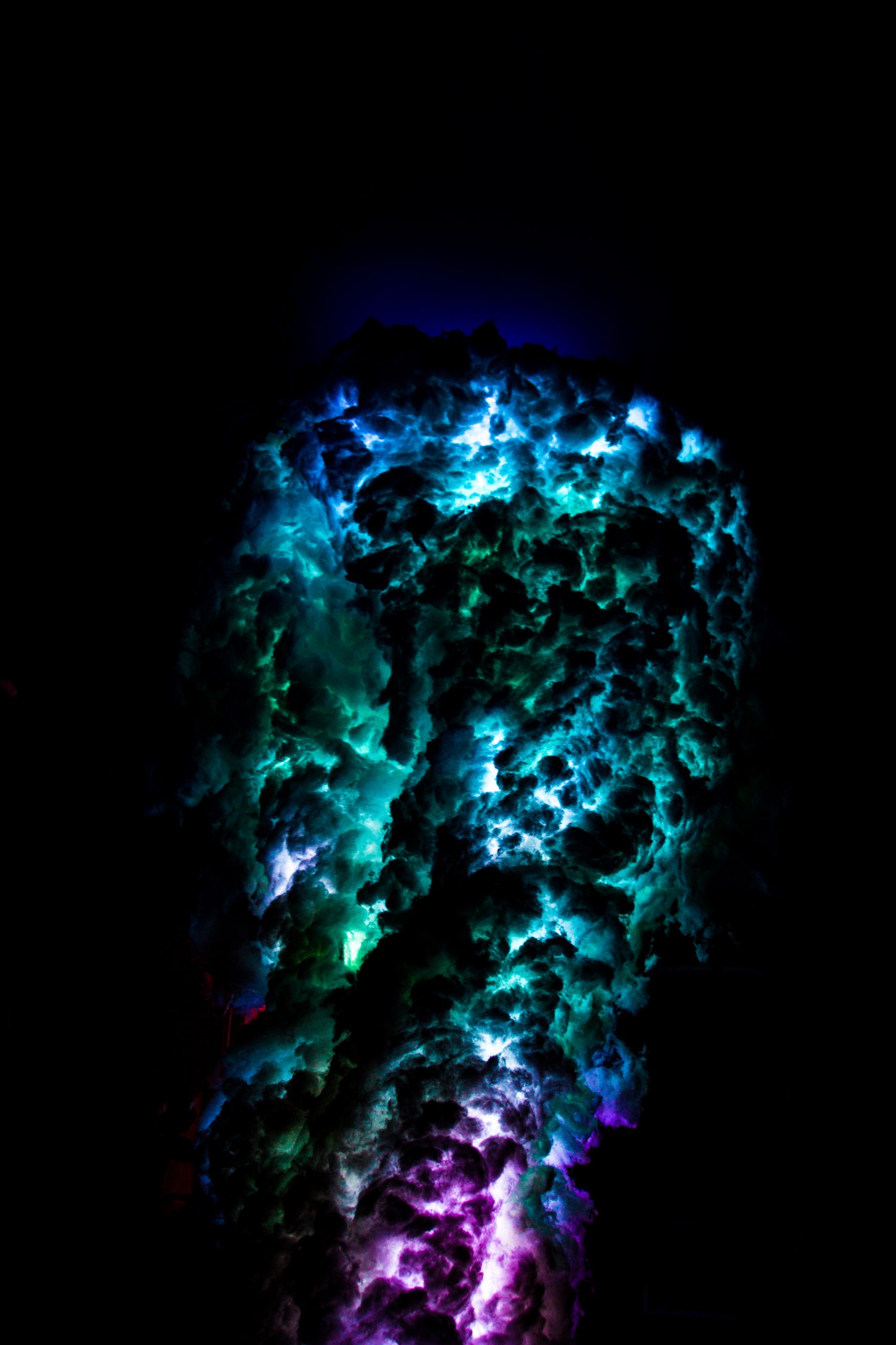 The Storm is an audio reactive light installation exploring LED light diffusion and elemental shapes and soundscapes. Sixteen feet of cloud covering billows from ceiling to floor, concealing over 6,000 individually programmed LED lights in this walk-around immersive audio visual experience. The Storm was premiered in April 2016 in the eerie subterranean surroundings of the old police cells underneath Brighton Town Hall as part of an exhibition of temporary installations.

We were invited to create an installation in Brighton’s disused old police station, built in 1832, condemned in 1929 and now preserved as a museum. Ithaca had been working with LED light in a variety of indoor and outdoor installations and we became interested in the effects produced when you diffuse them.

The dilapidated sub basement rooms under the old police cells presented such a dark and atmospheric setting that it seemed a perfect place to experiment with diffused light and sound design, bringing modern technology into an historical setting within the confines of a small, damp, low-ceilinged room with limited power and on a minimal commission budget.

We hung a circular wooden frame on the ceiling, from which were suspended strips of individually addressable LED lights, made to our own specification and divided up into sections to create interesting shapes and spaces to look through. This ‘skeleton’ of lights was draped with sheets of wadding fabric and then built up into billowing 3D clouds with small pieces of pillow stuffing.

The lights were coded by us to synchronise with the sound design, a custom soundscape also produced by Ithaca.

The final work was shown on 29th April 2016 as the finale of a sold out exhibition, in which the audience travelled down into the depths of the building through a curated immersive environment.

The Storm has been recreated at UK art festivals including the 2016 UK LightPool Festival, part of the world famous Blackpool Illuminations, alongside works from artists including Yoko Ono, Bob and Roberta Smith, Liz West and Ron Haselden. It was shortlisted for a darc Magazine Architectural Award in the ‘Best Light Art - small budget' category and will be exhibited in China in 2018.