The RAVEN, bringing the Sun to the Daytime Sky - CODAworx 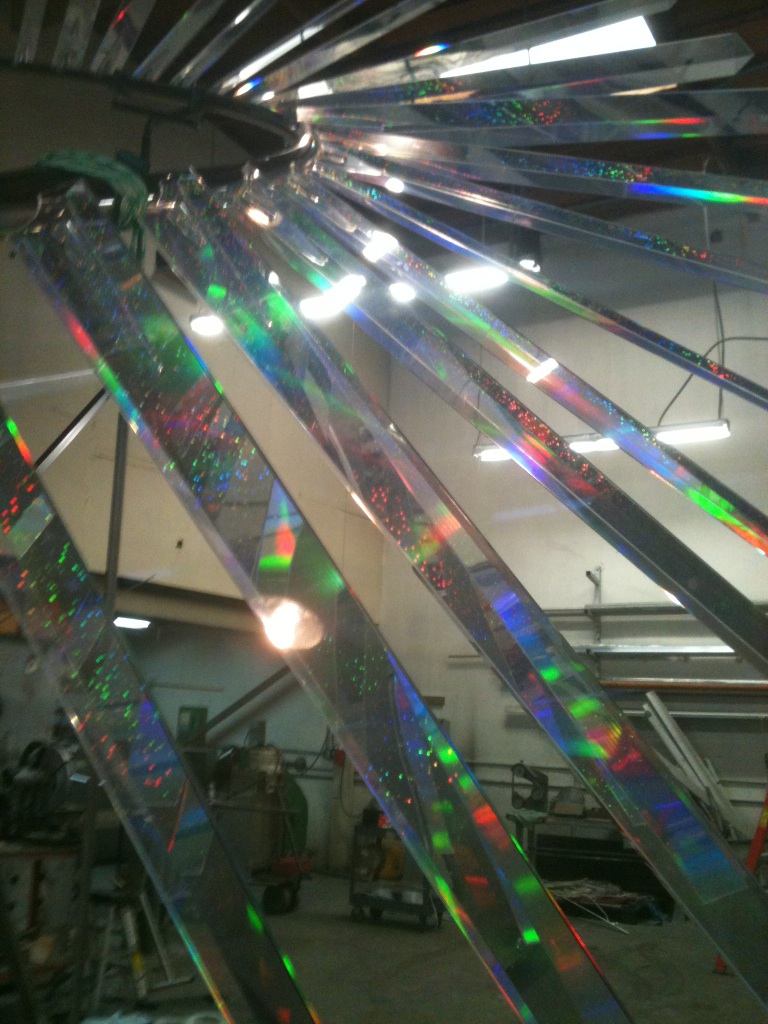 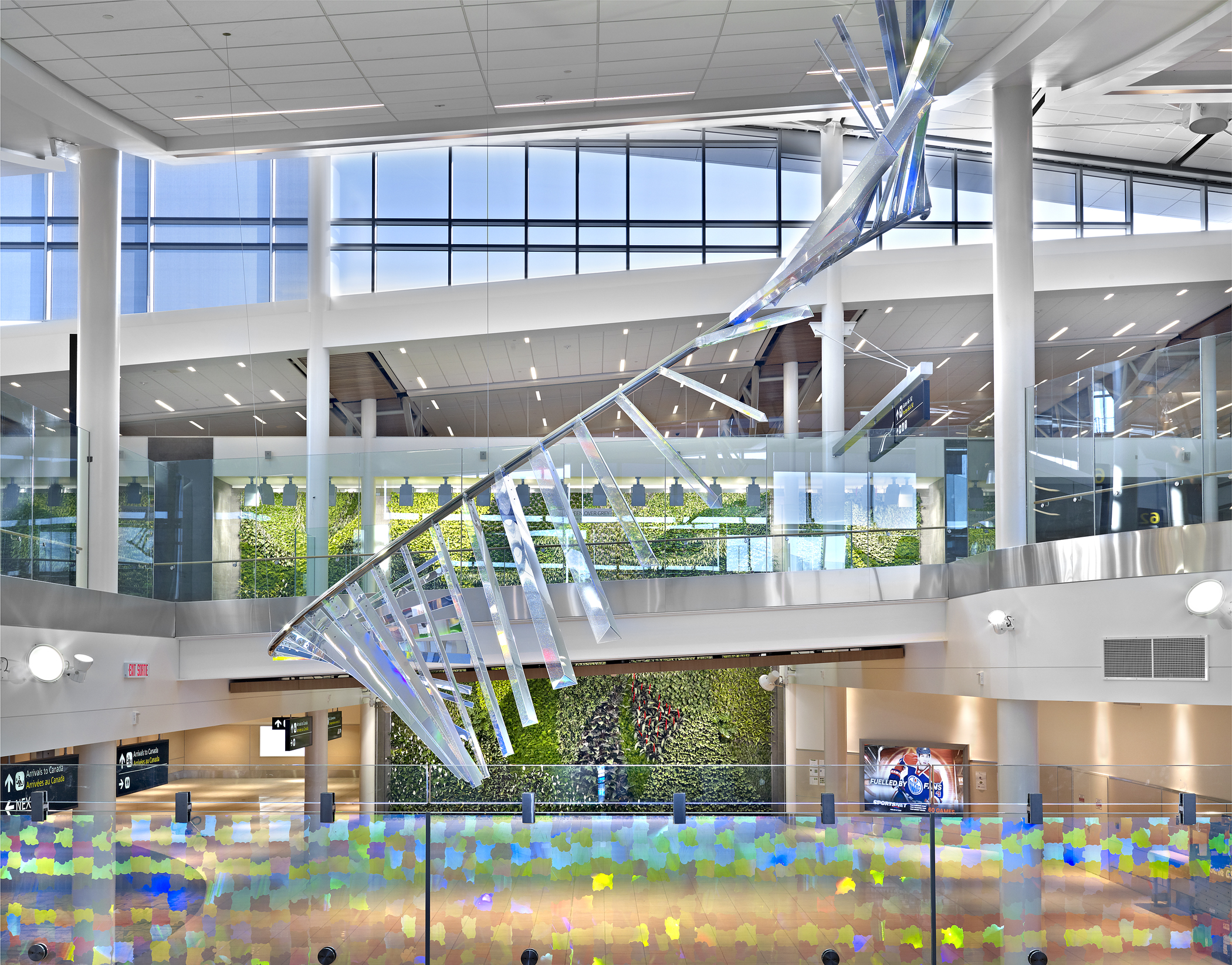 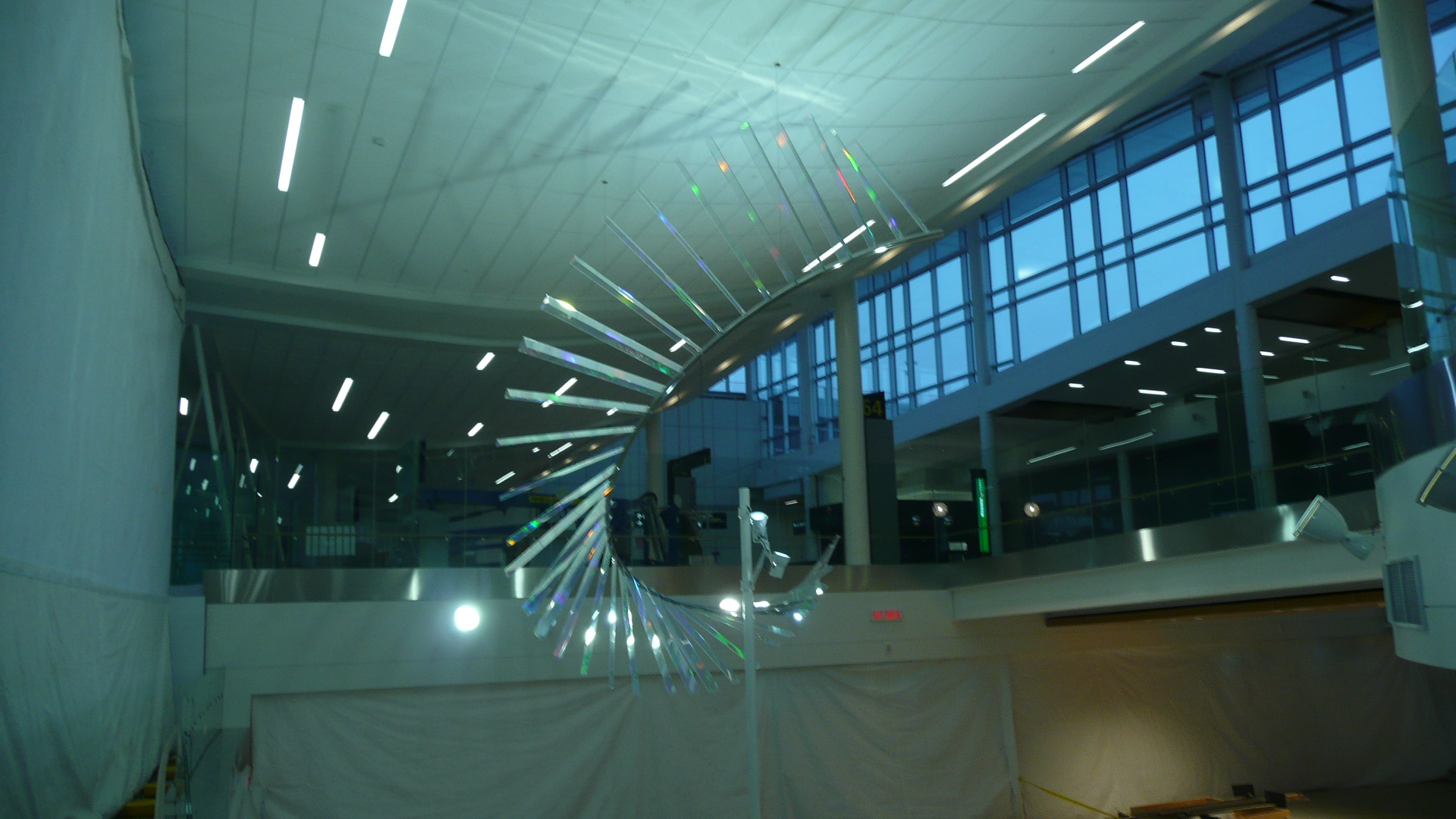 Stainless Steel tube, suspended arc sweeping within the ‘NODE’ area’s upper reaches, gliding horizontally, swooping back up as it cycles through a 90° twist. Affixed 36 acrylic elements – arranged with 2”, 3”, 4” & 6” sides … all 6’ long.

Persons arriving, working at or departing from Airport pass beside, beneath or above Artwork.
When struck by sunlight, the surfaces of the holographic triangulated tubes diffract this light within the space; creating iridescent rainbows upon these blades splashed upon & over the Ceiling, Walls, and Floor.

When I first studied the renderings of the new Edmonton International Airport, I was struck by the openness of the central atrium space that everyone arriving in Edmonton would encounter ... coming upon my proposed suspended artwork: easily seen from the interstitial walkway or upon entering the arrivals (ground floor), portion of the new EIA addition. Because of the west facing, two-storey curtain wall glazing, I wanted to verify my expectations that during the course of each day, bands of sunlight would splash across this floor, and the transparent handrail walls of the interstitial walkway, as well as (especially in the Winter months, when the sun’s daily catenary is lower), those that surround the second floor’s ‘glass bridge’ balcony from which one will look into this “Node” space.

I proposed a Lumetric Sculpture of my creation (which I have assigned the working title– “The Raven {Bringer of Light}, placing the Sun into the daytime sky”) - to be suspended from the ceiling of this Location #1(Canada Border Services Agency Area). The inspiration for this concept and its title is derived from the lore and legends of the native peoples, who originally resided on the prairies near where Edmonton is situated.

This 3,500 lb Sculpture is suspended and evenly weight distributed from only 4 points of fixity … at both ends of the 3” tube and two secured at element #12 and #18’s locations (the 1/3 and 2/3’s marks respectively). Theses support-hooks were located by the Architect & installed by the GC, for this project. This simple design is elegant and graceful, but consciously insures that all components are easily re-assembled from four 9’ Stainless sections - for ease of being shipped. After the triangulated tubes were reinserted onto their supports - designed, fabricated and installed by Dave McCalley ... ‘McCalley Rigging’; the entire sculpture was hoisted up and attached to the four previously strung support cables.

The conscientious design guideline I employed for this suspended sculpture = all components are virtually maintenance free, except for periodic cleaning. The holographically originated widow-films (constructed on Photographic-grade 3 mil transparent Polyester), are permanent and no part of them nor any of the sculpture components (there are no pigments), will fade or degrade over time. Because these holograms have a very high spatial frequency (~1,200 lines per mm), they require very little light, responding dramatically & dynamically to all light sources.

My initial focus was to capitalize on the daily penetration of the Prairie Sunshine that Edmonton is famous for - which influenced all of my suggested holographic components. Also, the smallest amount of man-made light create subtle and every changing colours (primary to pastel hues), to appear undulating over the handrail’s glazing, as well as over and within the sculpture itself. The lyrical display of the Raven’s winged-flight path was plotted to spiral upward, within immediate view of everyone approaching, entering or standing within this site. The sculpture’s configuration intimately embraces this aerial space, yet is not physically touchable.