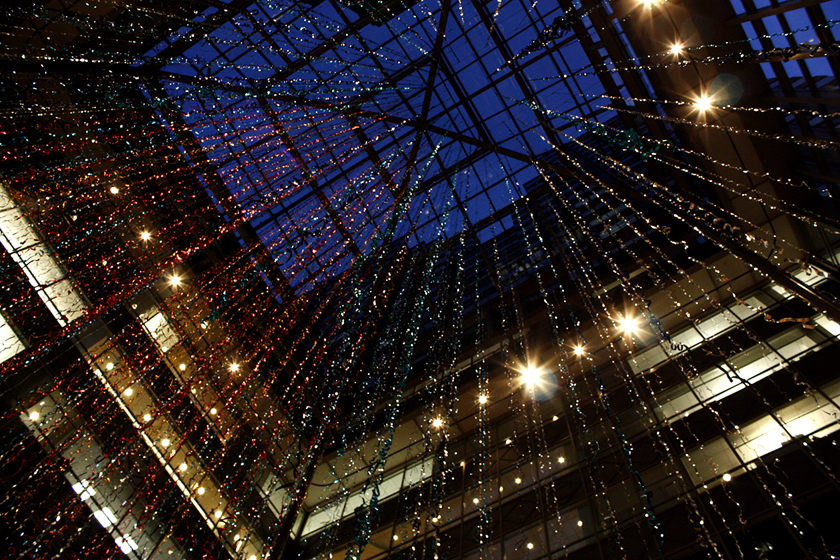 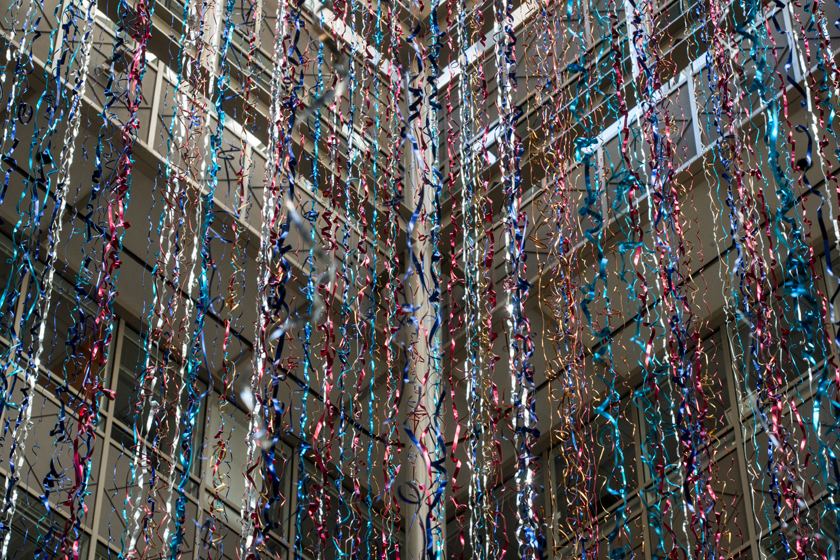 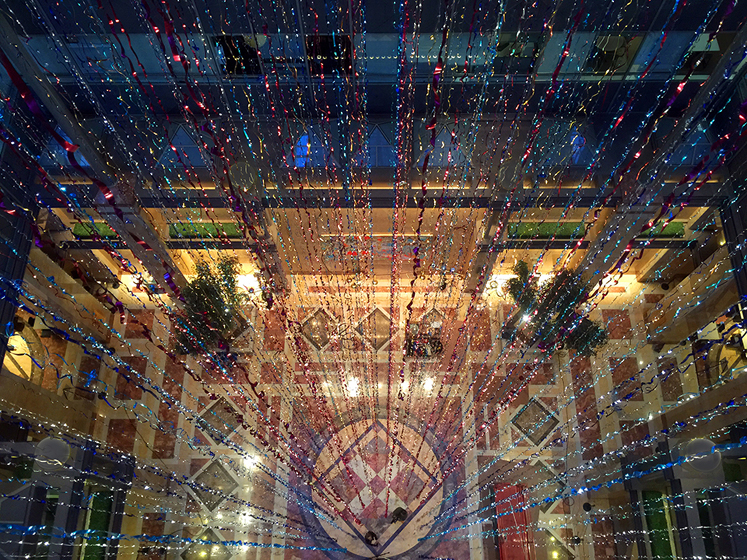 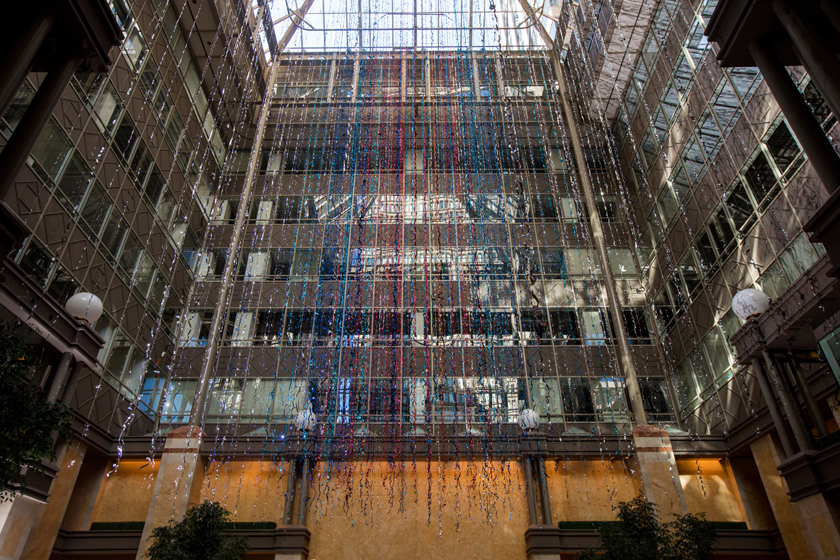 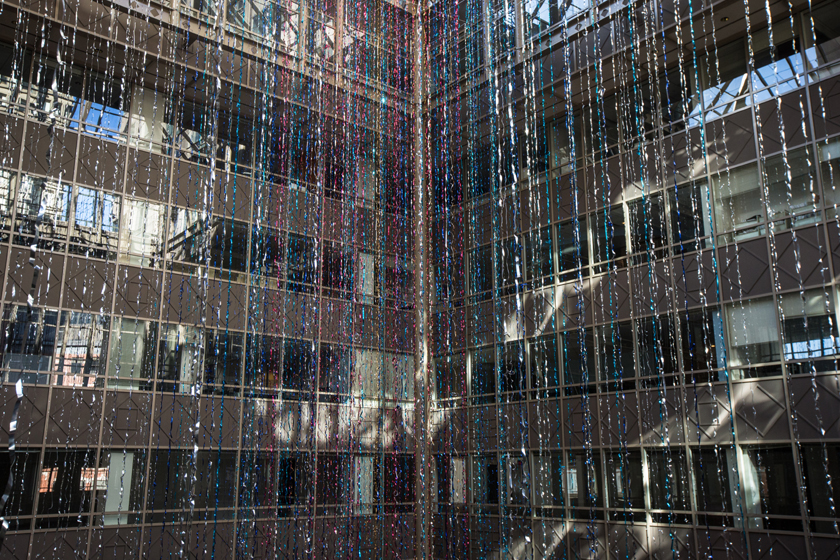 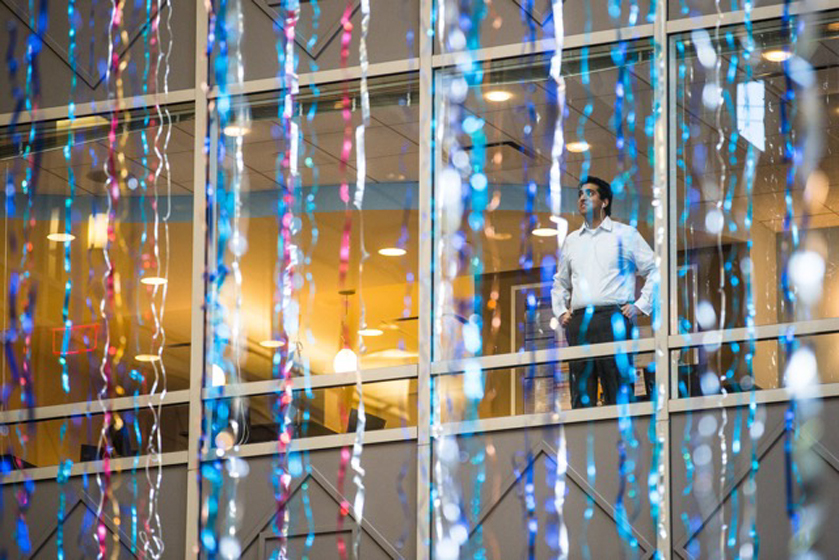 Comprising more than seven miles of aluminum, Patterson’s piece–titled ‘The Light Between’–hangs in the 10-story atrium of 125 High St., consuming the space and enhancing the abundant natural light pouring in from the glass roof above. Nearly 450 aluminum strands are suspended from overhead cables, with each of the 110-feet long wires — which vary in width and color — meticulously bent into its own distinct shape.

Meant to represent the sky, stars, and sun, her new installation’s celestial hues — blue, turquoise, silver, red, copper and gold — capture and reflect the sunlight, harnessing energy and movement for a vivid effect. The light radiates outwards as the space between the wires increases from the inside out, with the warm colors packed densely in the middle, only 6 to 8 inches between the strands. Patterson had previously done a project with ribbons as the material, and in this installation she sought to encapsulate the motions in a more malleable material. She had worked with aluminum before and liked how it keeps its shape, making the colors so vibrant.

It took a crew of 10, including Patterson’s associate designer Kina Park, seven days to put “The Light Between” together, but the project began in 2013 when Patterson met Jerry Speyer of Tishman Speyer, 125 High St.’s developer. Speyer, the chairman of the Museum of Modern Art in New York City, was excited to bring Patterson’s aesthetics to his large and busy atrium. For the artist, it was the perfect place to implement her vision.

Music affects Patterson’s work beyond orchestral halls, as well. The artist has synesthesia, a neurological phenomenon that causes her to see shapes and colors when she hears music, so much of her art is often a response to that. For “The Light Between,” the work of local composer Michael Gandolfi — who works at New England Conservatory of Music — was a big part of her conceptualization process.