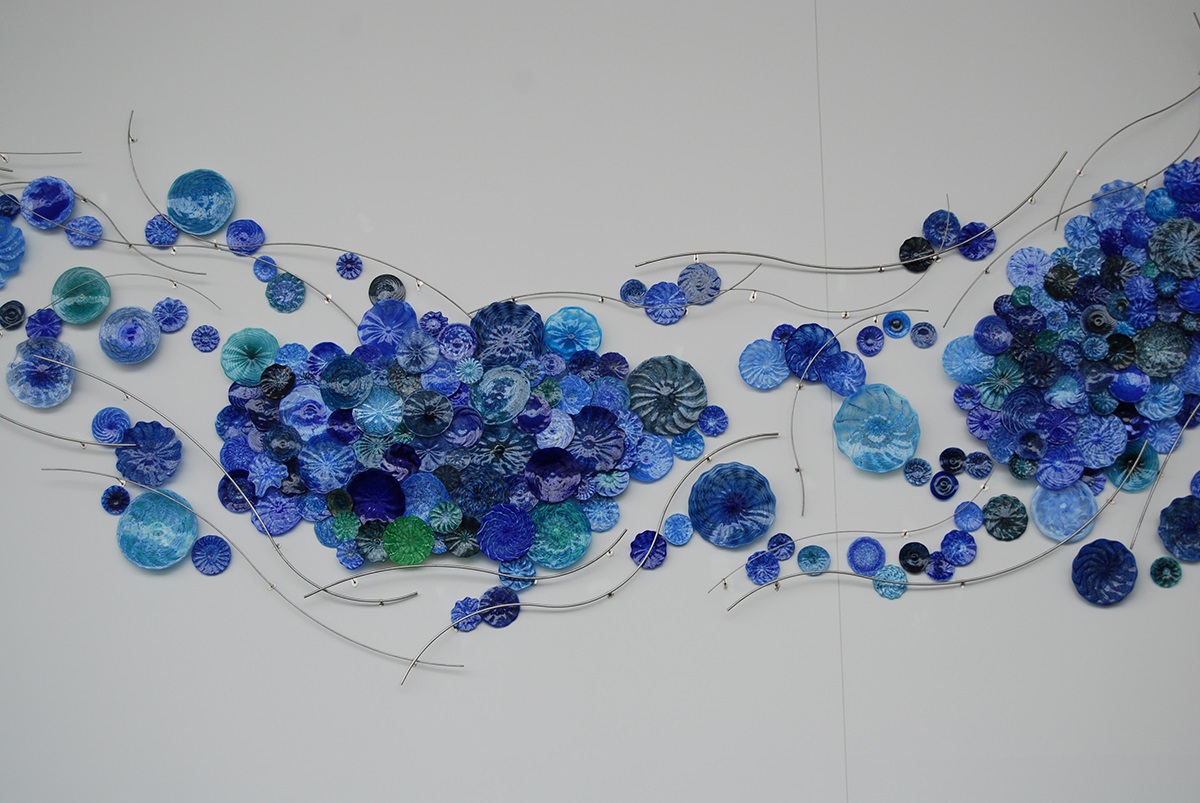 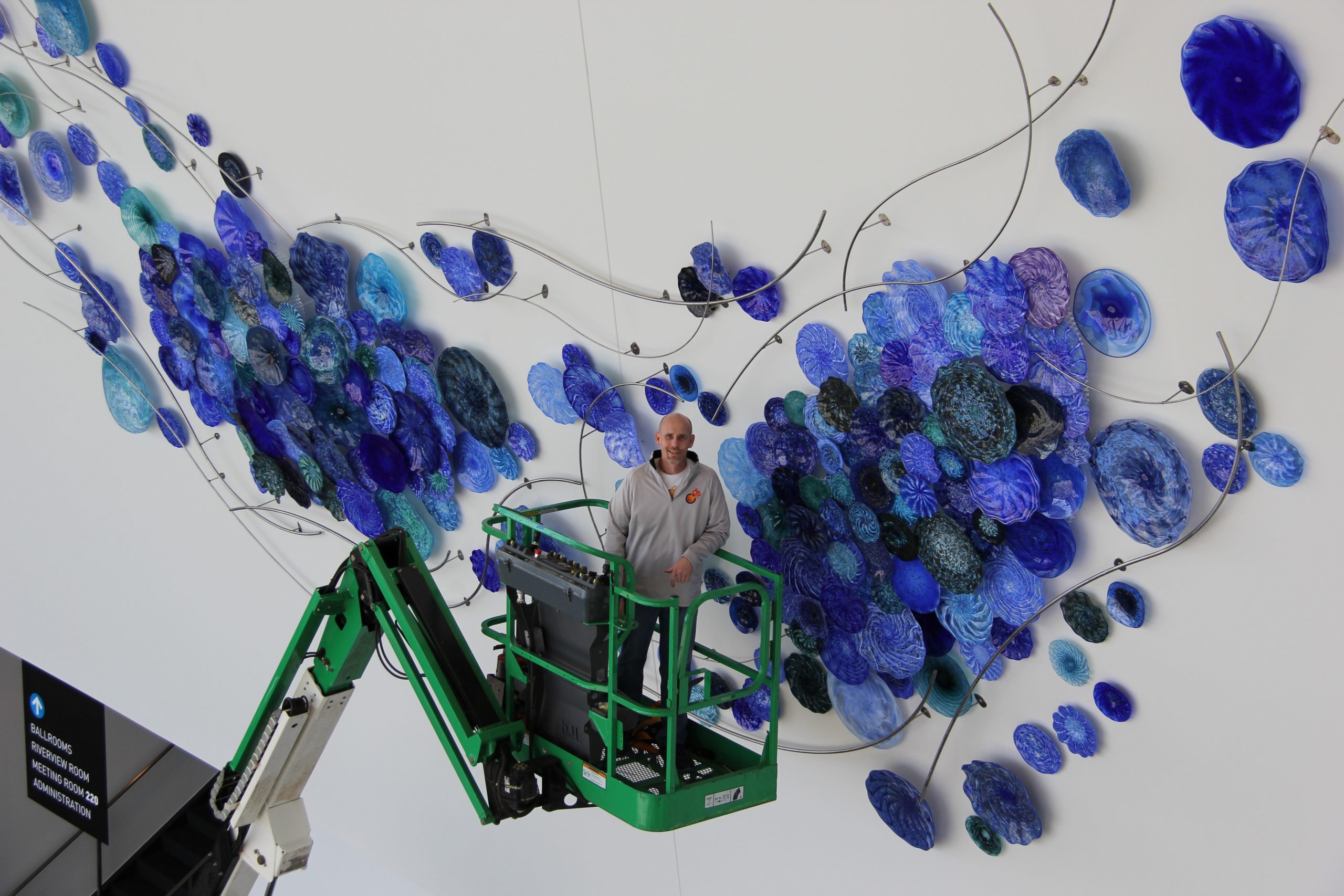 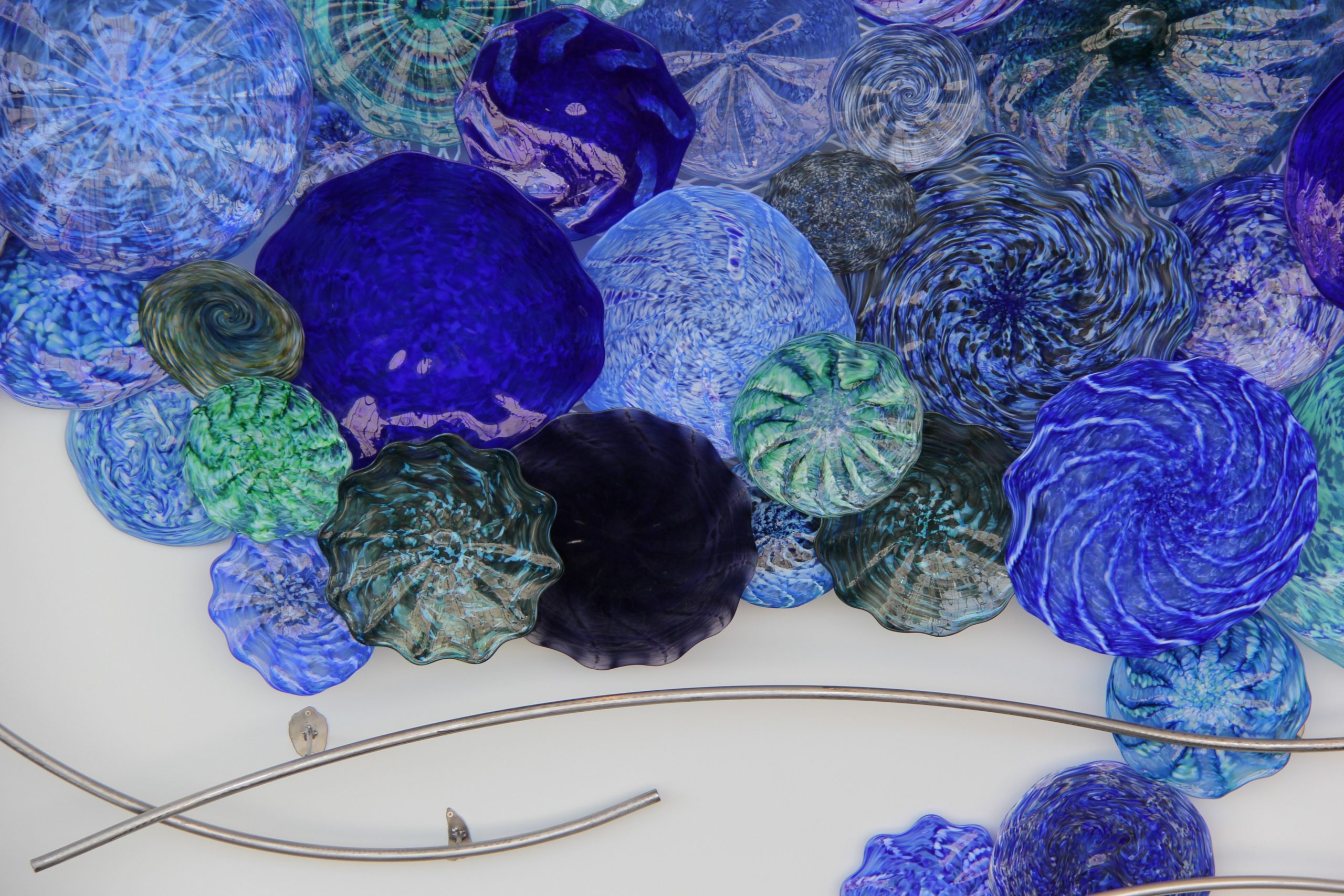 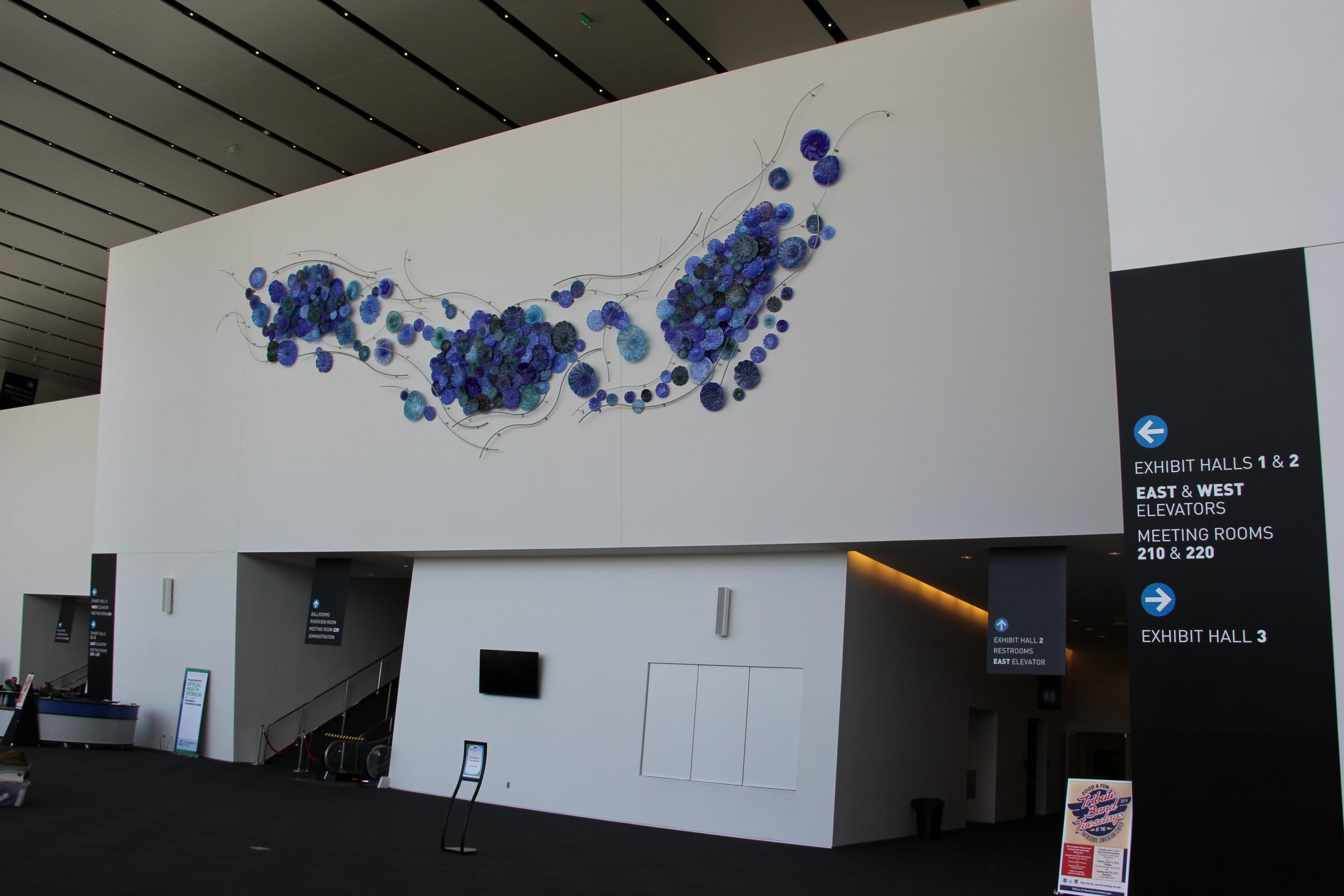 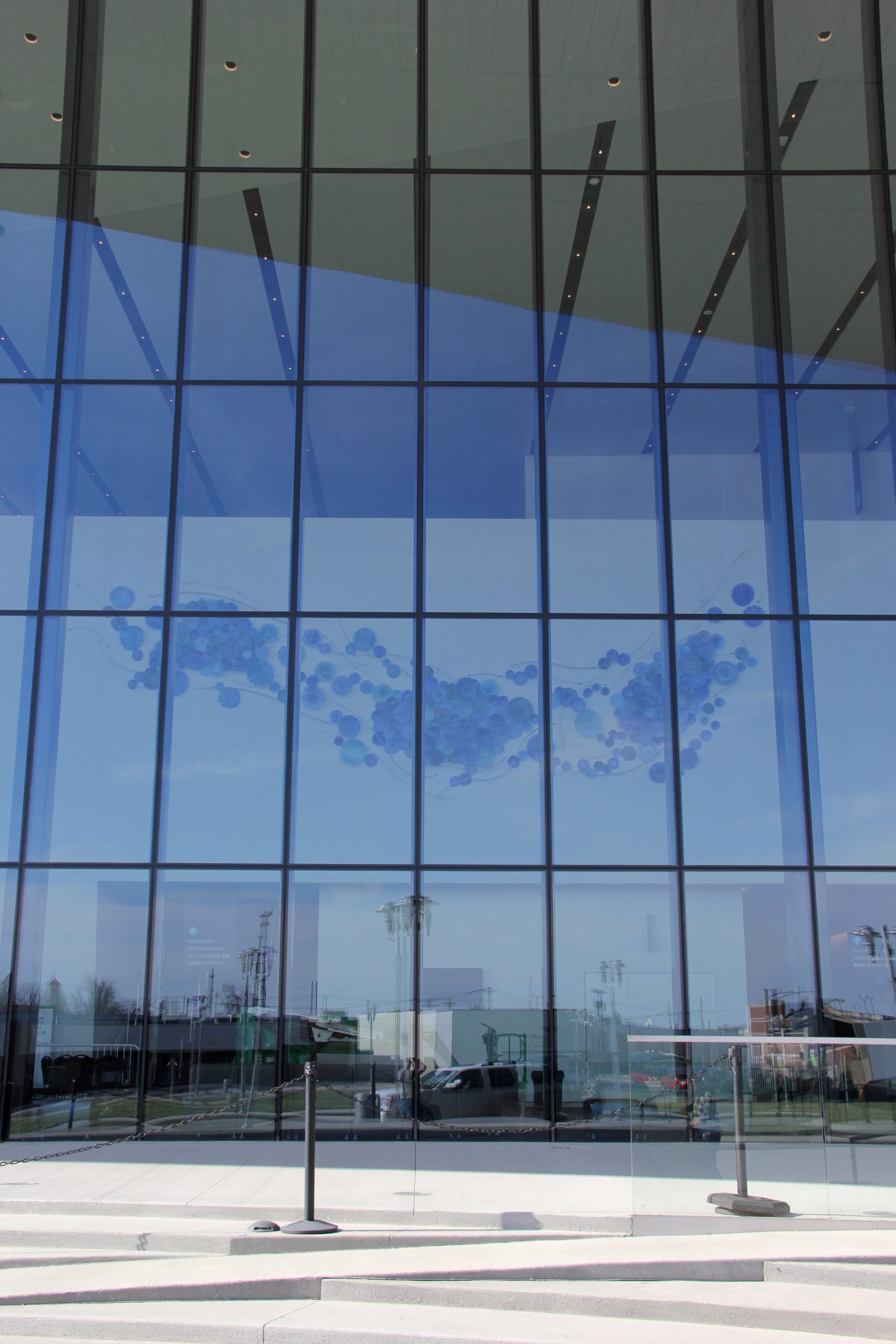 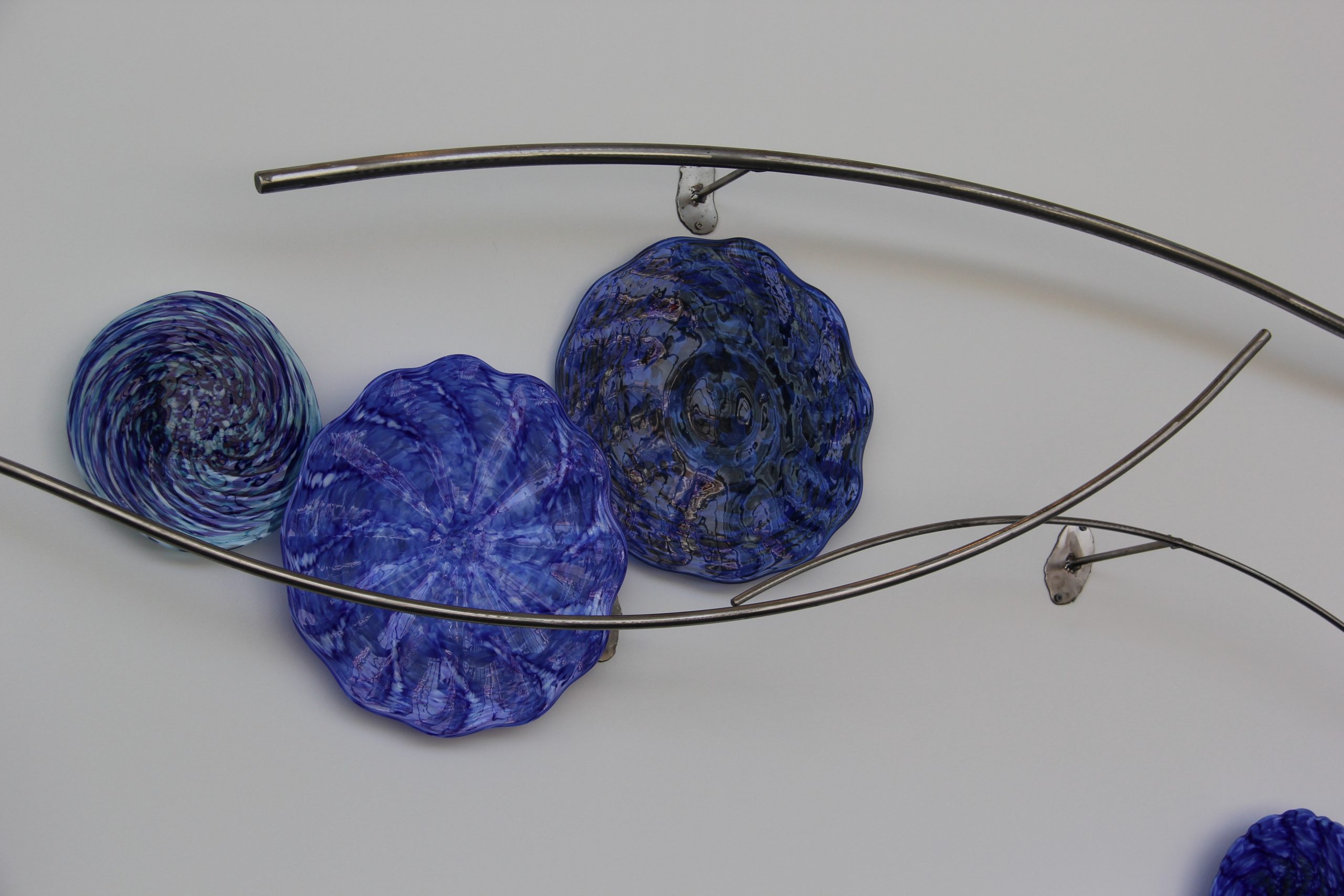 The Legendary Ohio Artist: Brook Forrest White, Jr Dimensions: 50 feet by 20 feet Glass and Steel Mounted on a 90 foot by 40 foot wall with a seven degree angle. 300 pieces of blown glass were created to achieve the desired outcome.

The Owensboro Convention Center was a giant white blank canvas. The goal for the art was to bring a vibrancy to the space and encompass the underlying theme of the Ohio River in the outcome. There are three very large white walls that make up the interior facade of the building and we knew it was going to take something special to fill the space, spark the imagination, and bring an over all cohesive look to the interior of the center. Brook Forrest White, Jr.'s, The Legendary Ohio, was a perfect fit both for the contemporary feel of the building and the stylized river theme that was requested by the city officials. The 300 discs in colors of teal, blue and green represent the water and it's rippling waves. The steel that contains and directs the discs are used to provide movement with in the piece. The bend in the center of this project represents the bend in the Ohio River than can be seen from the 3rd floor of the Convention Center.

Studio Slant was thrilled to be able to present the work of Brook Forrest White, Jr. to the city of Owensboro for the convention center. Along with his glass blowing abilities he brings with him a sense of hometown boy. Brook was born in Owensboro, studied under Stephen Powell at Center College and is the owner of Flame Run in Louisville. This was Brook's largest project to date and required a bit of imagination in order to see what 300 pieces of glass would look like on a 50 foot wall. The construction crew of Denark was instrumental in installing plywood that would be used to hold the structure, Dean Dennis, general manager of the convention center, was very hands on in the process also. The Mayor and Mayor Pro-Tem of Owensboro took great enjoyment in unveiling the projects to the public and helping promote the importance of public art in general. Brook and his team worked tirelessly to achieve what you see before you. It was a large undertaking and through the persistence of all involved has brought the public art of Owensboro, Kentucky to an all new level.

It took two trips from Louisville to Owensboro just to bring all the pieces down. It took two weeks to complete the installation on a scissor lift two stories up. To put the piece together all of the discs had to be laid out on the floor of the convention center. It was an intense puzzle with a magical finish. This piece serves as the focal point for possible expansion in the future. There is a wall of the same dimension on either side that could hold the extension of The Legendary Ohio.