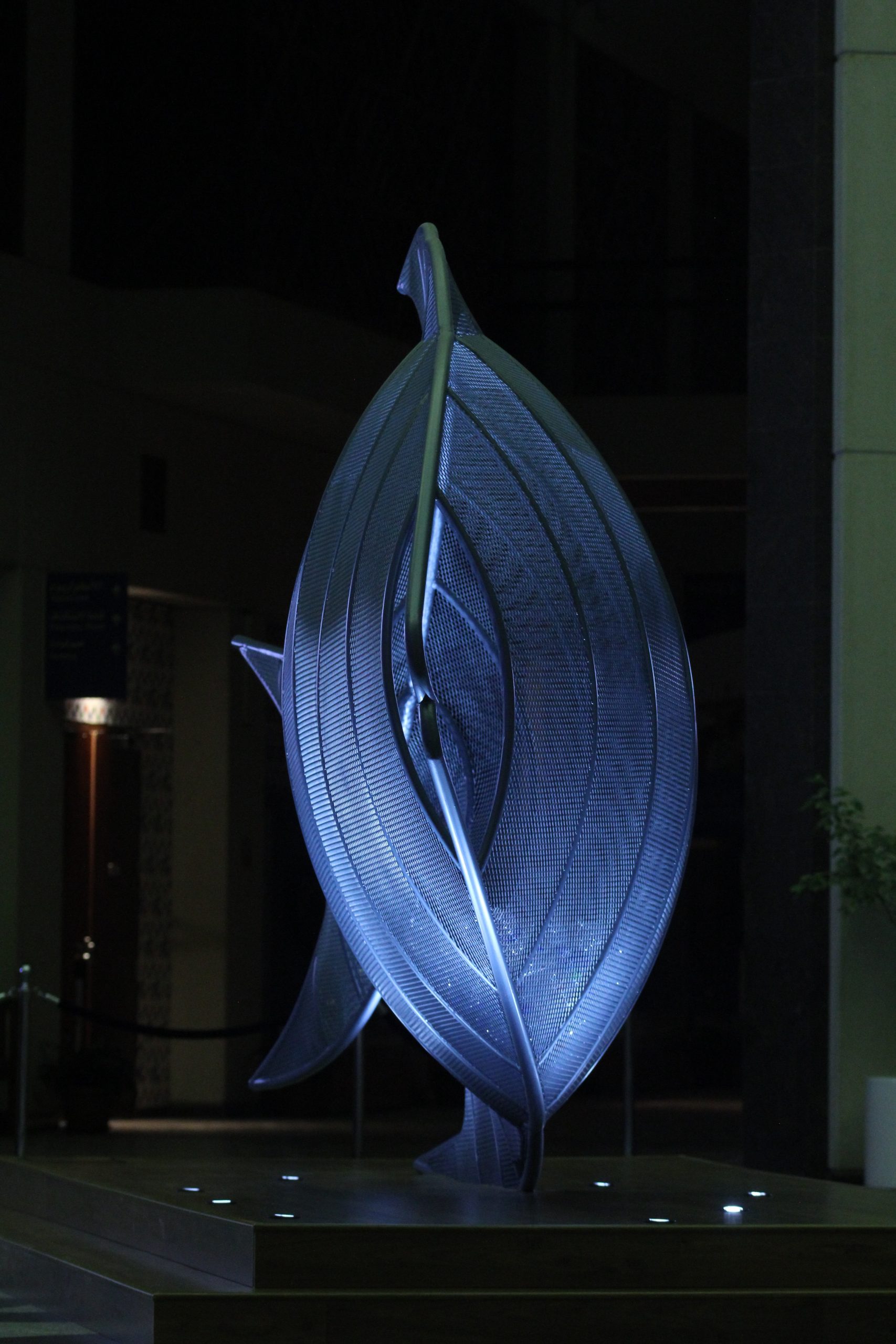 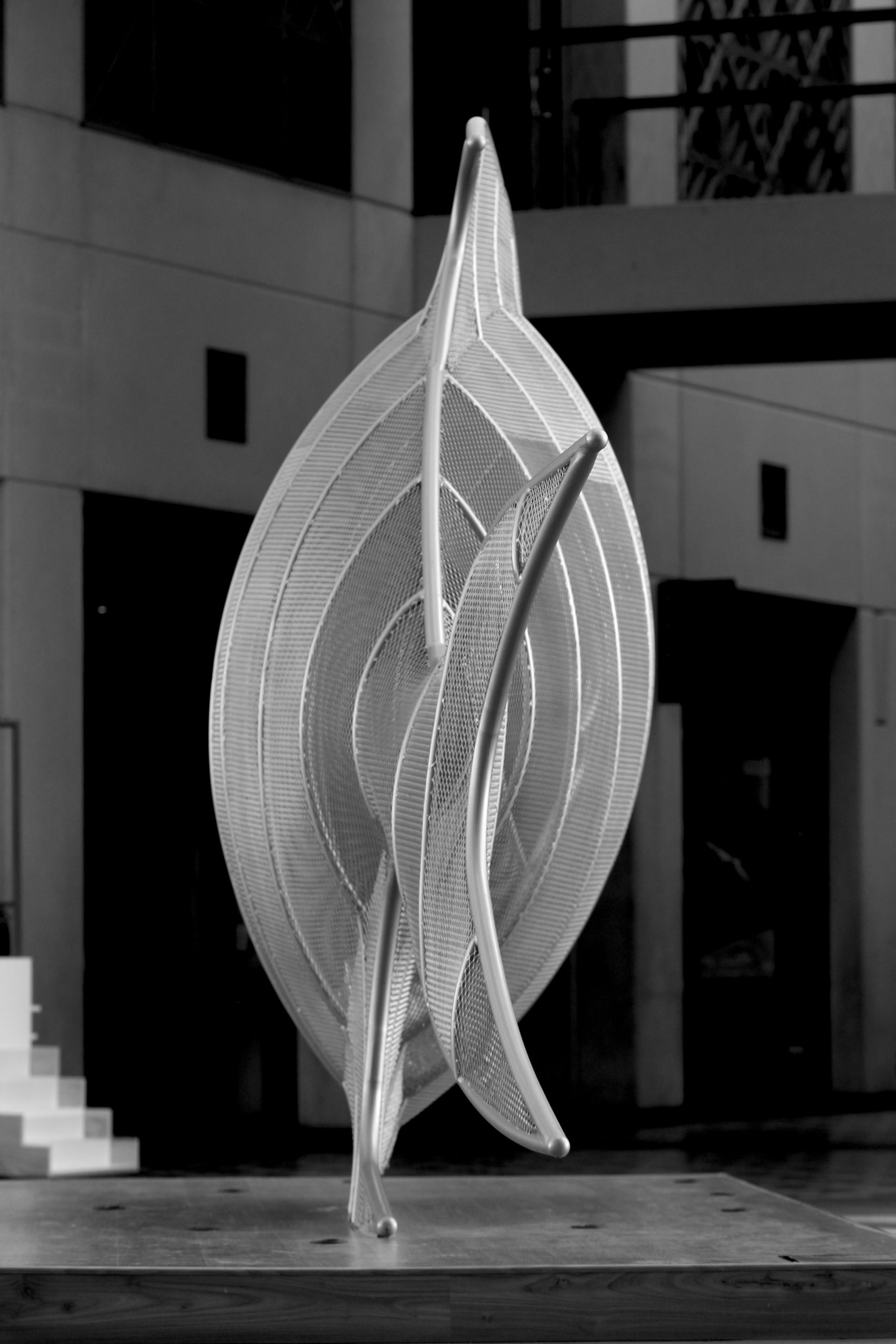 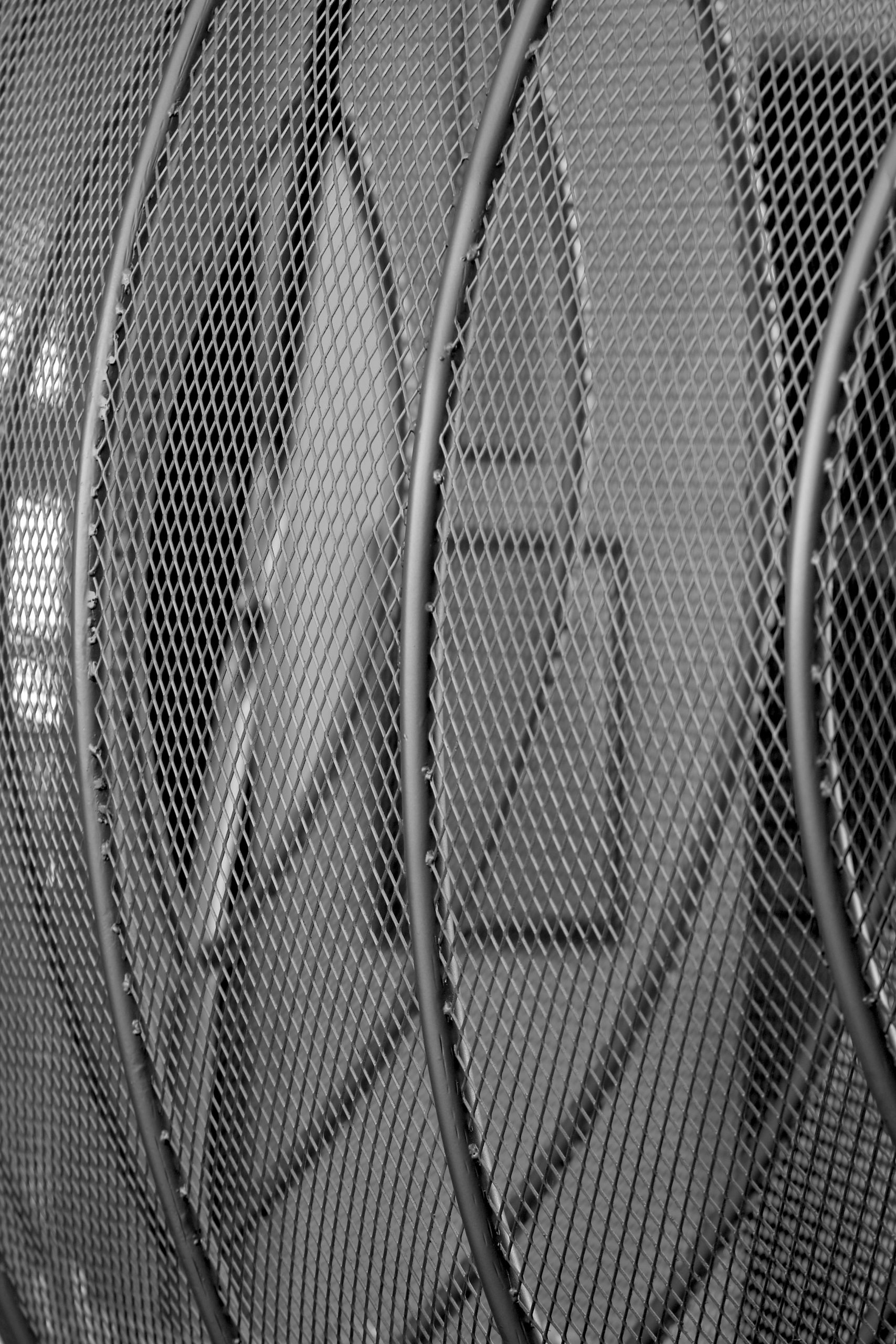 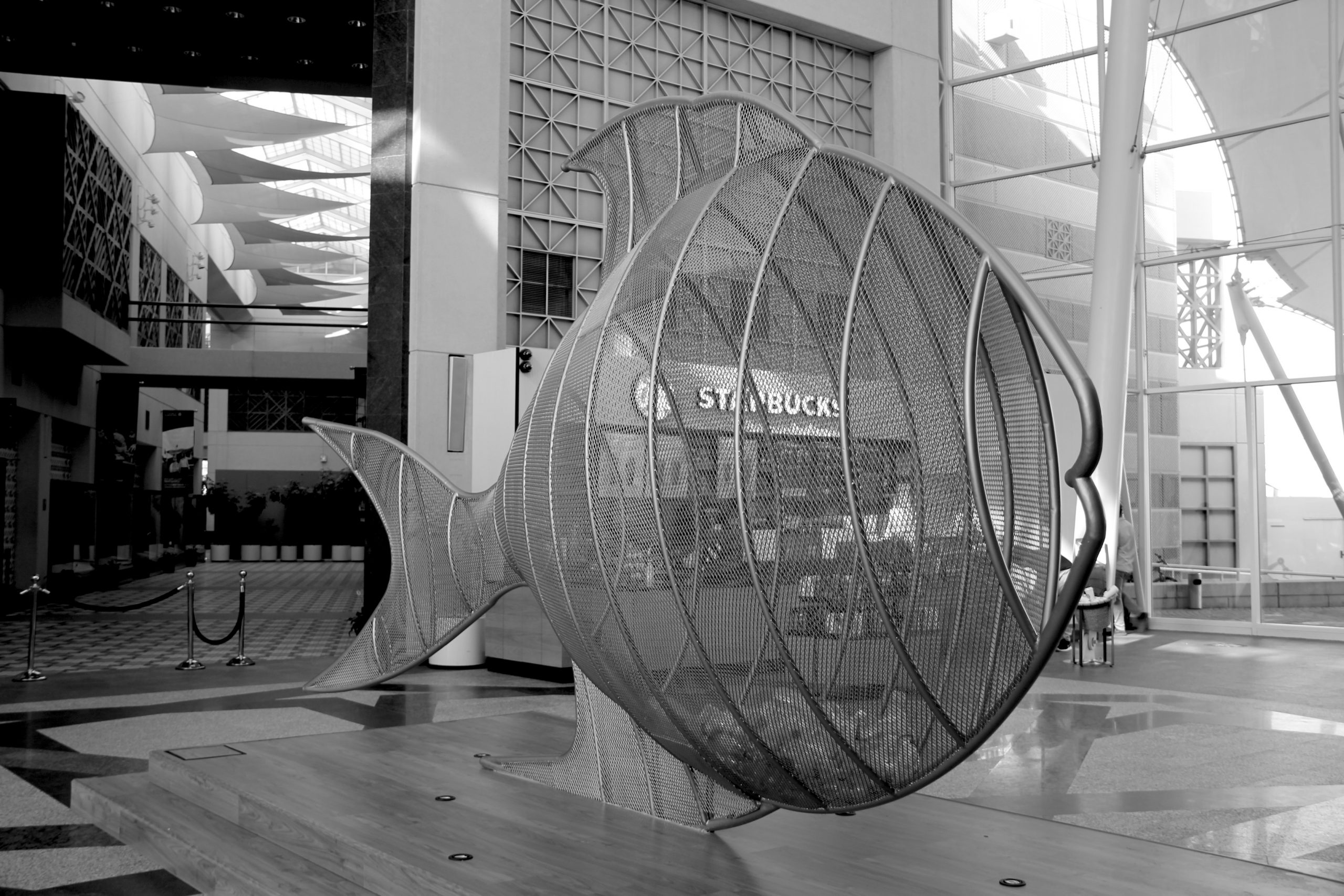 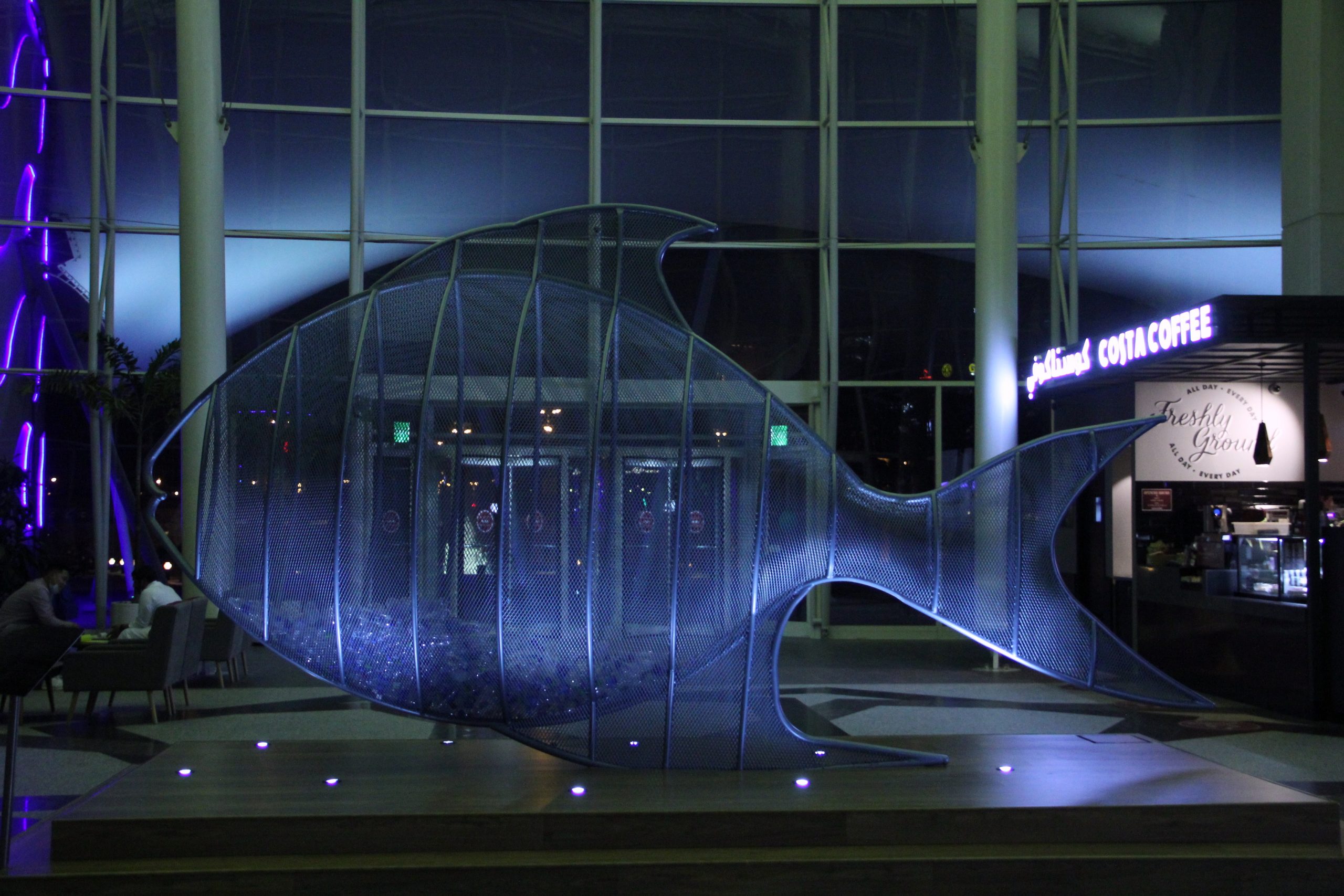 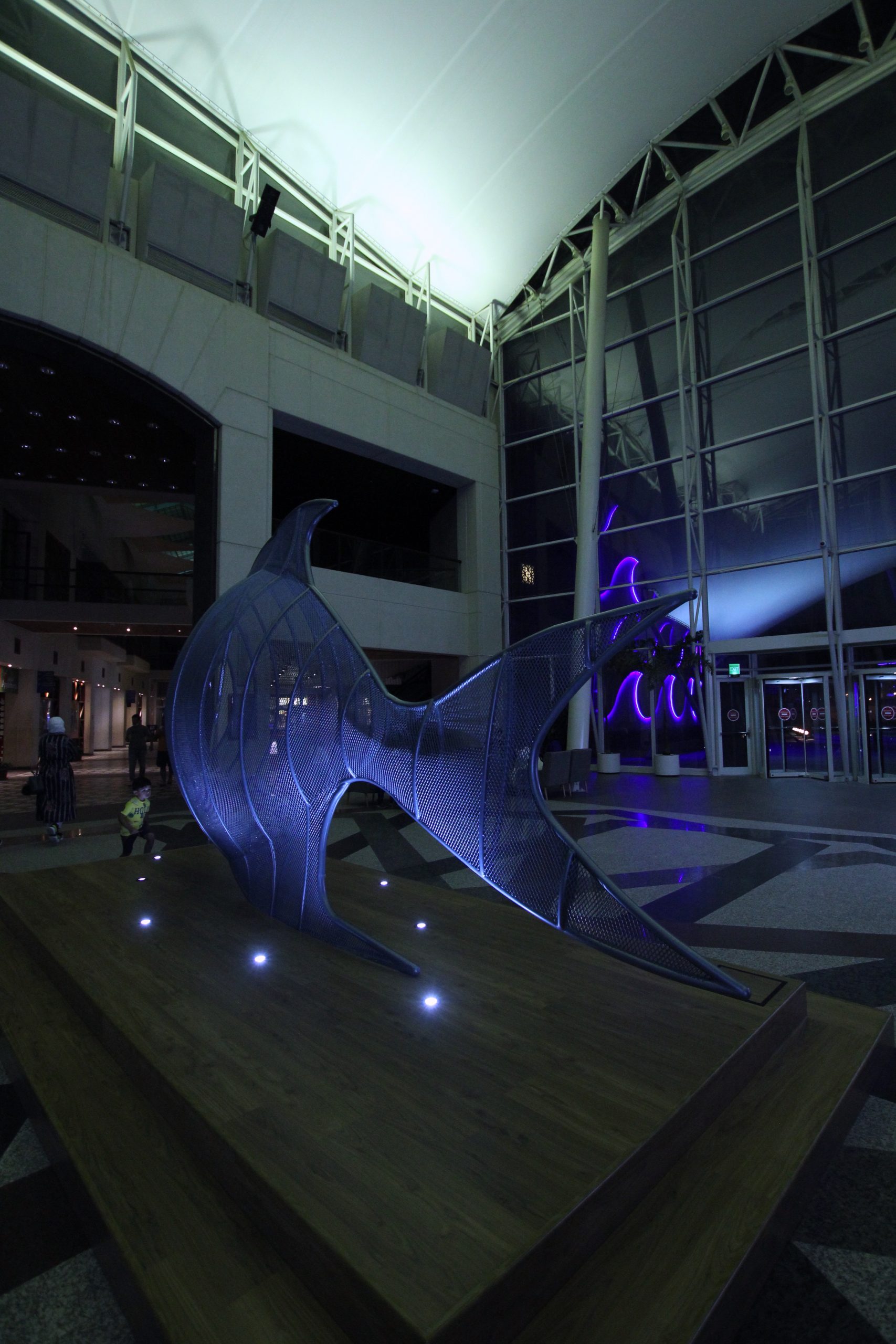 ‘The Last Catch’ is an interactive installation that aims to raise public awareness on the effects of pollution and overfishing on Kuwait’s most iconic sea creature, the Zubaidy fish. The sculpture celebrates the Zubaidy by making its anatomy larger-than-life, allowing viewers to appreciate it from a grand perspective in Kuwait’s science museum.

Plastic bottles are collected and tossed into the fish’s head, echoing the pollution in Kuwait‘s environment. The bottles are cleared and recycled on a regular basis. The sculpture and recycling program aim to do their part in reducing plastic in our local waters as well as educating the public on the dangers of single use plastic to our local marine life.

Since 1995 the catch of Zubaidy has plummeted nearly 90%, and Kuwait’s air and water pollution as well as rising temperatures only harm the marine life’s habitat to an almost irreversible state.

The installation takes centre stage in the middle of the museum’s lobby, much like the bones of a prehistoric dinosaur would. And much like a dino-skeleton, this fish is presented in a way that expresses its fluid movement in the water with an anatomical curvature so that museum-goers can be ever-so intimate & comprehensive with the fish so as to appreciate its natural splendour.

This interactive installation achieved its goal of environmental awareness by introducing an innovative way to educate museum-goers about plastic pollution and overfishing of our beloved fish, the Zubaidy. During most of the pandemic, the museum has been closed but the cafes have been open since the science museum is on the seafront and many runners, cyclists, and people taking a stroll on the waterfront have been able to take a break in the museum's refuge, enjoy a beverage, before tossing it into the fish's mouth and adopt a new lifestyle of recycling, which hopefully becomes more common practice in Kuwait. The sculpture's beauty comes from the eloquent anatomy of the fish as it swims through the water, its curvilinear body is all that was mimicked in order to produce a gracious sculpture (which did not come to fruition without its technical challenges in design and execution).

The installation's colour is a sparkling pearlescent turquoise, reminiscent of the fish's view underwater when looking up at the sun's reflection refracting onto the waves and introducing a rainbow of hues underwater.

This installation has indeed served its purpose from an aesthetic and activist standpoint and continues to do so for the foreseeable future.

The Scientific Center organized a conference for Sustainability Month '20 coordinated by Trashtag Kuwait in which the sculpture was intended to be a part of, due to the pandemic the social events stopped and the museum has been closed for a year, but the sculpture's fabrication and installation continued since the cafes in the museum lobby were open and visitors could still interact with the sculpture. The commissioner found a productive way to collaborate with us since the conference was postponed indefinitely and we achieved a successful project. Trashtag and The Scientific Center came to us with the intention of an interactive sculpture for recycling and we complimented the concept by designing based on a local fish which is at risk of extinction due to overfishing, hence the title; The Last Catch. This interactive awareness project would not have been so well received by the visitors were it not for the collaborators' intellectual and pragmatic contributions.

To fabricate the fish in a way that makes it look like its swimming, the "skeleton" and mesh had to have double-curves, which required not only unconventional construction methods, but unconventional thinking! Thankfully, we achieved the intended result, and the kids that come are able to comprehend the movement of the fish and really 'submerge' themselves in the importance of recycling.