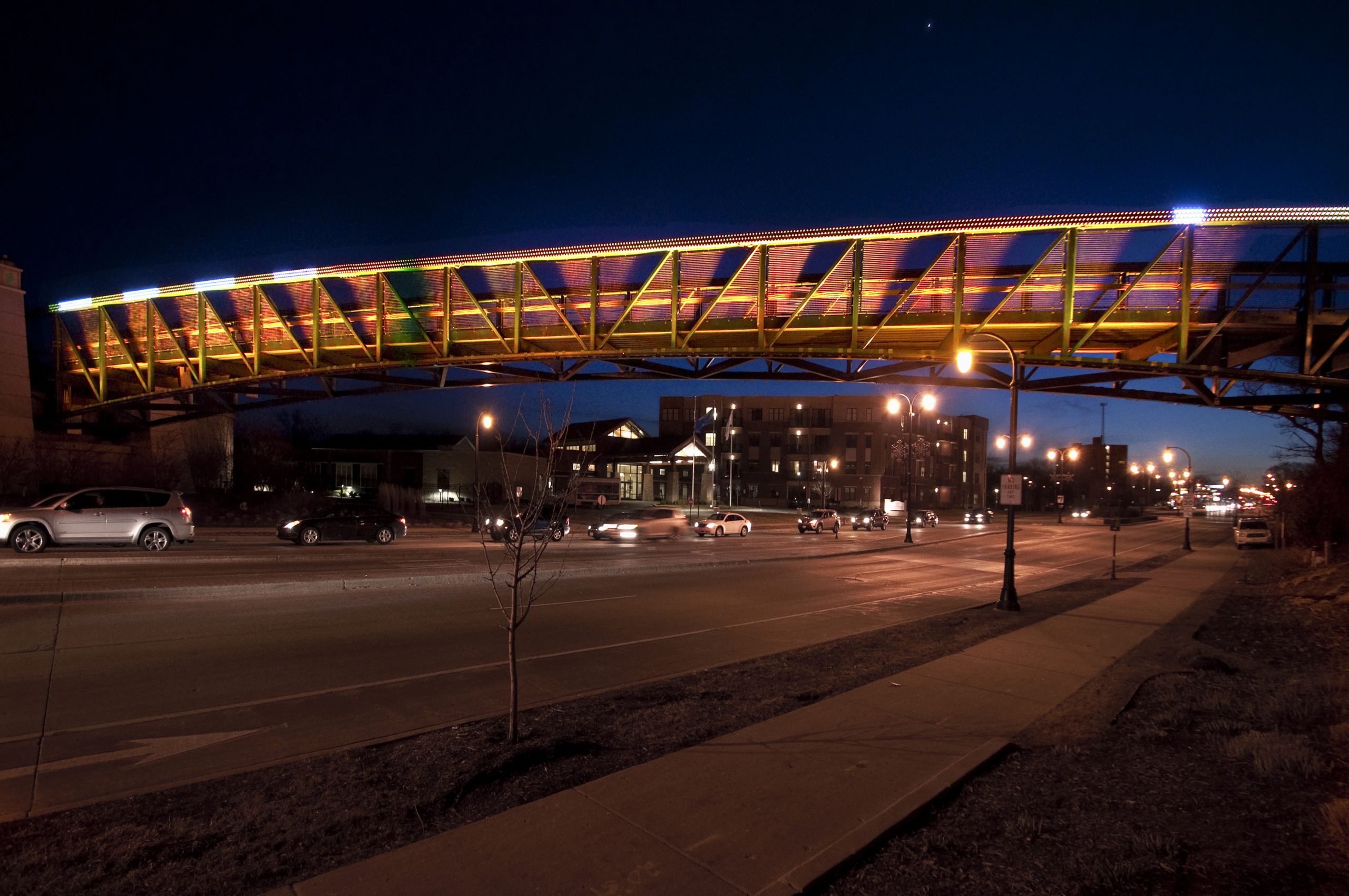 Asked to illuminate a 200' pedestrian bridge as an artistic gateway to the village, the designer began research and discovered it once carried a historic train. From there he developed the idea of "The Ghost Train", blending art, technology and history to "activate" the bridge. The artistic allusion recreates the schedule and speed of the passing train every night, complete with choreographed sound effects. Other times the bridge is lit with 30 different animated compositions of color and movement, for 90 minutes of unique, randomized kinetic content.

The bridge is the entire canvas, painted with dynamic light to create the Ghost Train effect, as well as the other kinetic looks. An idea percolated to combine lighting and control technology with creative programming to create an allusion of the passage of the train over the bridge: a suggestion that would be a "ghost" of the train. Challenges included the bridge having very little surface to illuminate, and what is there is painted very dark green, requiring a unique solution to enhance the reflectivity. The first night 2000 people watched as the allusion began with the mournful sound of a distant approaching train horn, as adjacent traffic signals were cycled to red to prevent driver distraction. Crossing bells began to clang and crossing “signals” started blinking on top of the bridge towers as the train sounds grew. The approaching headlight sweeps along the top of the bridge, as the horn and rumble of the train reached authentic volume. The headlight and engine barreled across the bridge at speed, followed by nine passenger cars and glowing windows, finishing with a red tail light and a swoosh of sparkling dust. Dozens continue to watch each night.

The Public Art Committee asked us to creatively light the bridge, but there was no funding yet available. The Ghost Train idea was developed by the designer in part to facilitate funding. The designer created an animated "mash-up" video of the new bridge with the old train to suggest this unusual concept, which caught on with historic groups, fund raisers and donors, and money was raised in three months. Complex reviews were required of traffic engineers, bridge designers and manufacturers, and approvals were required by State, County, City and Village authorities. Traffic distraction was mitigated by integrating nearby traffic signals to stop traffic, requiring the coordination of two municipalities and stoplight contractors. Custom mounting bracket were designed and fabricated, with fixtures custom painted to match the bridge. Mockups were held, and sound levels tested prior to final installation. Installation contractors had to work along bridge cycle traffic and traffic lanes had to be coordinated and closed below. Due to approval delays the entire project was installed, commissioned and programmed within three weeks prior to the Halloween "First run" premiere.

This installation is extremely popular with Village's residents, with people watching the Ghost Train's passing every night, exceeding its placemaking goal. The blend or art, history and technology allowed for the funding of the bridge lighting, accomplishing the original goal of creating a gateway to the Village that is illuminated with a kinetic color-play of light and movement.